The first of its kind in the world, founded in Compiègne in 1927, the National Car and Tourism Museum waits while a large-scale project combining aesthetic, societal and future mobility aspects lies in the hands of the French State. We take a look at what is at stake. 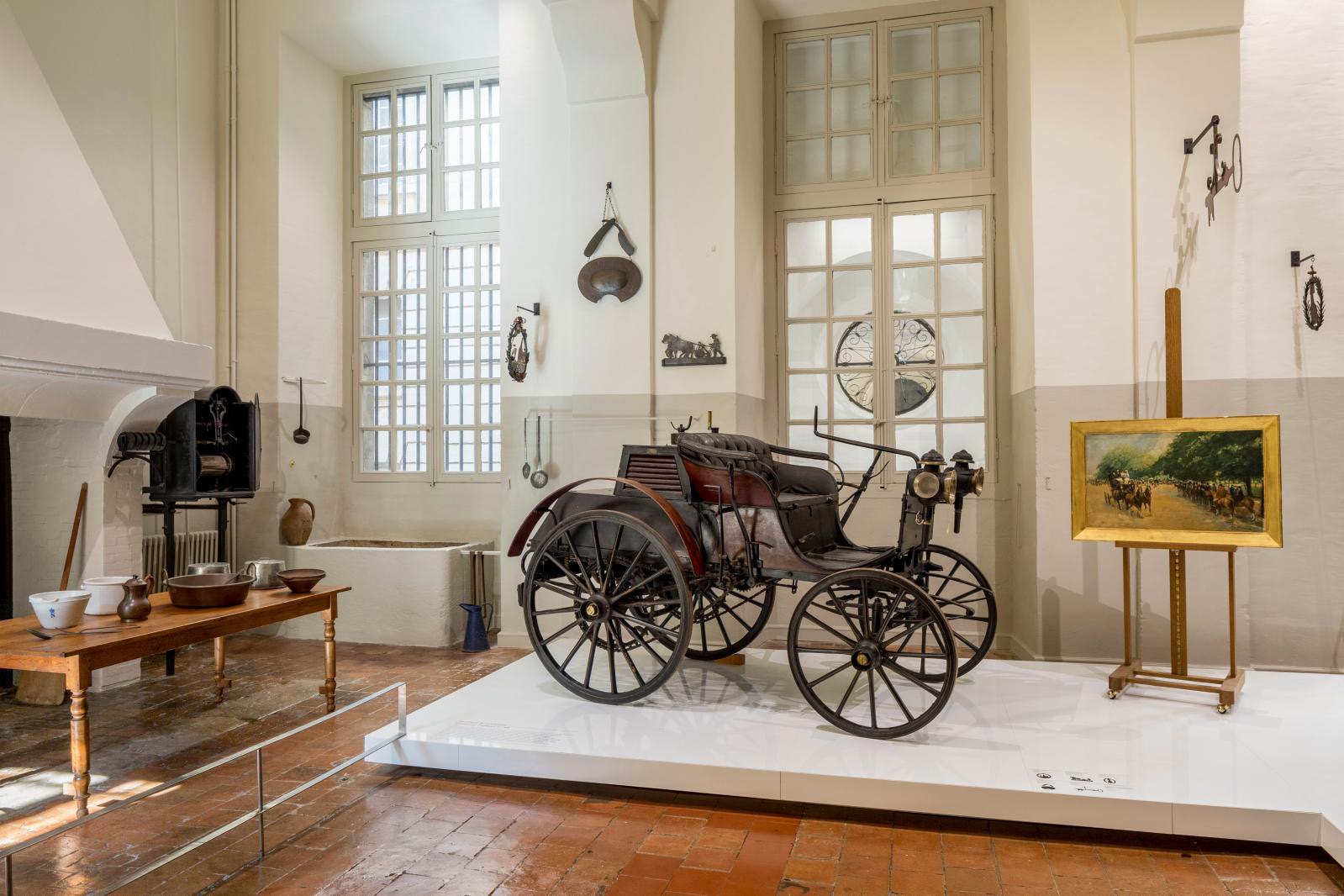 Polluting, useful but valueless, dangerous... Is the disillusionment with the car today jeopardizing our knowledge of it? As you walk through the National Car and Tourism Museum, which has been housed in the neoclassical Chateau de Compiègne for almost a century, the answer seems obvious. An outmoded museography, yellowing paintings, inaccessible collections, piled up vehicles, minimal or no mediation: the ever-shrinking pathway with rooms gradually closed and converted into storage rooms is troubling. Worse still, the large kitchen courtyard, covered in the 1930s with a magnificent glass roof by architect Marc Bitterlin (1885-1963)—a pupil of Gaston Redon (Odilon's brother)—only received the waterproofing and safety work necessary for its reopening in 2019 after 20 years out of action. But the opaque whitewash concealing the structure is still there.

Origins
In the land where the motor vehicle was invented, the idea of a museum retracing the history of road locomotion from the early days of horse-drawn carriages to the emergence of the automobile and tourism arose under the most promising auspices. Léon Auscher, vice-president of the Touring Club de France, and Georges Kellner, founder of the car bodies of the same name, went to see Beaux-Arts director Paul Léon (1874-1962) to offer the State a collection of historical vehicles in exchange for the creation of a museum that would complement the Galerie des Carrosses (carriage gallery) created by Louis-Philippe in Versailles. Leading names in the automobile industry were involved in the project. André Citroën offered the Elephant-à-la-Tour, the only half-track from the first Trans-African expedition (1924-1925), now in a public collection; the Fulmen firm and the Jénatzy family donated the famous Jamais-Contente, the first electric car produced in 1899, whose rocket-like looks were matched by speeds of over 100 kph, and Louis Renault offered his Type A of the same year, an exceptional witness of the beginnings of the Renault brothers' company. "This first transport museum arose from an awareness of the heritage value of the automobile and France's role in this innovative industry," says Rodolphe Rapetti, director of the Compiègne and Blérancourt national museums and estates. At the 1900 Universal Exhibition, a section was dedicated to the automobile, and in 1925, Grenoble devoted a landmark show to it. Locating it in Compiègne, Napoleon III's palace, was also a tribute to the industrial development of the Second Empire: a key factor behind France's pioneering role in automotive innovation. It also coincided with a period of institutional transformation of the châteaux, which had ceased to be places of residence with the coming of the Third Republic and were gradually being turned into museums. Today, the National Car Museum deserves to be revisited, reoriented towards the future and celebrated."

Loss of Interest
The author of a report in 2007 on the automobile museums of France, the current director of Compiègne drew an obvious conclusion: this automobile heritage was in danger. After decades of lack of interest, the establishment's various curators had been alerting the ministry to the condition of their collection since the 1950s. "The considerable rise in prices in the vintage automobile market led to heritage specimens hemorrhaging out of France for over 20 years. Its mobile nature downgraded it from the fine arts, while its design, considered a decorative art, took it out of the science and technology category," says Rodolphe Rapetti with regret. Since his arrival in 2018, he has set out to prove its potential through offbeat exhibitions, from the current presentation on speed, shoehorning fast cars into the imperial reception rooms, to last year's "Concept-Car" focused on the aesthetic affirmation of the automobile—the most visited exhibition in the chateau's history. Passionate about his subject and efficient with it, the curator also submitted a project for refurbishing the automobile collections. After a feasibility study under the aegis of OPPIC (Operator for Cultural Heritage and Building Projects) in 2020, an assessment for a four-year project was drafted for the Ministry of Culture's Heritage Director in late 2021. Would it be more successful than the previous one? In 2016, the Greater Compiègne region bought the former royal stables of Louis XV from the "Haras Nationaux" (national stud farm) with the idea of moving the circuit there. But Françoise Nyssen, the then minister, dashed the community's hopes and shelved an expensive project (€20 M) that would also have made the imperial estate lose some of its appeal. "The museum must remain in the château and respect its history," thunders its director. It is thus planned to restore various museographic features like the glass roof, certain original display cases and the harness room. The project aims to make the car as an object central to the approach again by showing how social and technical developments have influenced the way forms have evolved. For instance, one room will compare a post house with a gas station, while another will be reserved for students of automotive design. Along with the Turin Automobile Museum, Compiègne is the only museum in the world to address the artistic aspect of the car, with drawings, paintings, prints, horse-drawn toys, old treatises and objects (tableware, scale models, puppets, etc.) illustrating the car's success.

"Is technique antinomic to beauty or a channel for it? The answer is self-evident when you look at a Bugatti," says Rodolphe Rapetti, with a sparkling eye. He adds: "At a time when heritage is rampant, I am surprised at how little attention is paid to the automobile. But the cars we know today will no longer exist in 20 years. Questions about the environment, mobility and cars of the future can and must be fed by the knowledge we can provide about its history. Weren't the first peaks of speed achieved by electric vehicles in 1900?" This delay is all the more astonishing since Mulhouse wanted to regain control of its National Automobile Museum-Schlumpf Collection, dating from 1981, and dismissed Culturespaces, which had been managing it until then, on January 1. Manufacturers are also developing their collections, like L'Aventure Peugeot, which has been preserving the brand's historic models in Sochaux since 1982 and opened an archive center in 2010, and the Conservatoire Citroën, which opened in 2001. Renault closed its museum in Boulogne in 2016, but now reopens it during the European Heritage Days. Nearly a century after it was written, Léon Auscher's prose in La Revue du Touring Club de France in September 1934 remains—alas—highly topical: "The extreme difficulty I experienced in getting some of the very earliest cars together to appear at this show, though they were no more than 20 years old, made me realize that they would soon be impossible to find. And as rarity dictates the price of things, it seemed to me interesting and even necessary to plan for the preservation of these rare pieces by creating a special museum."

The French City of Céret, Capital of Modern Art
Not to be missed
Analyses