The coronavirus did not get the better of the 26th edition of the New York art fair, which ran until March 8 on the quays of the Hudson River. Collectors turned up from the VIP day onwards, and sales were fairly sustained throughout the week. 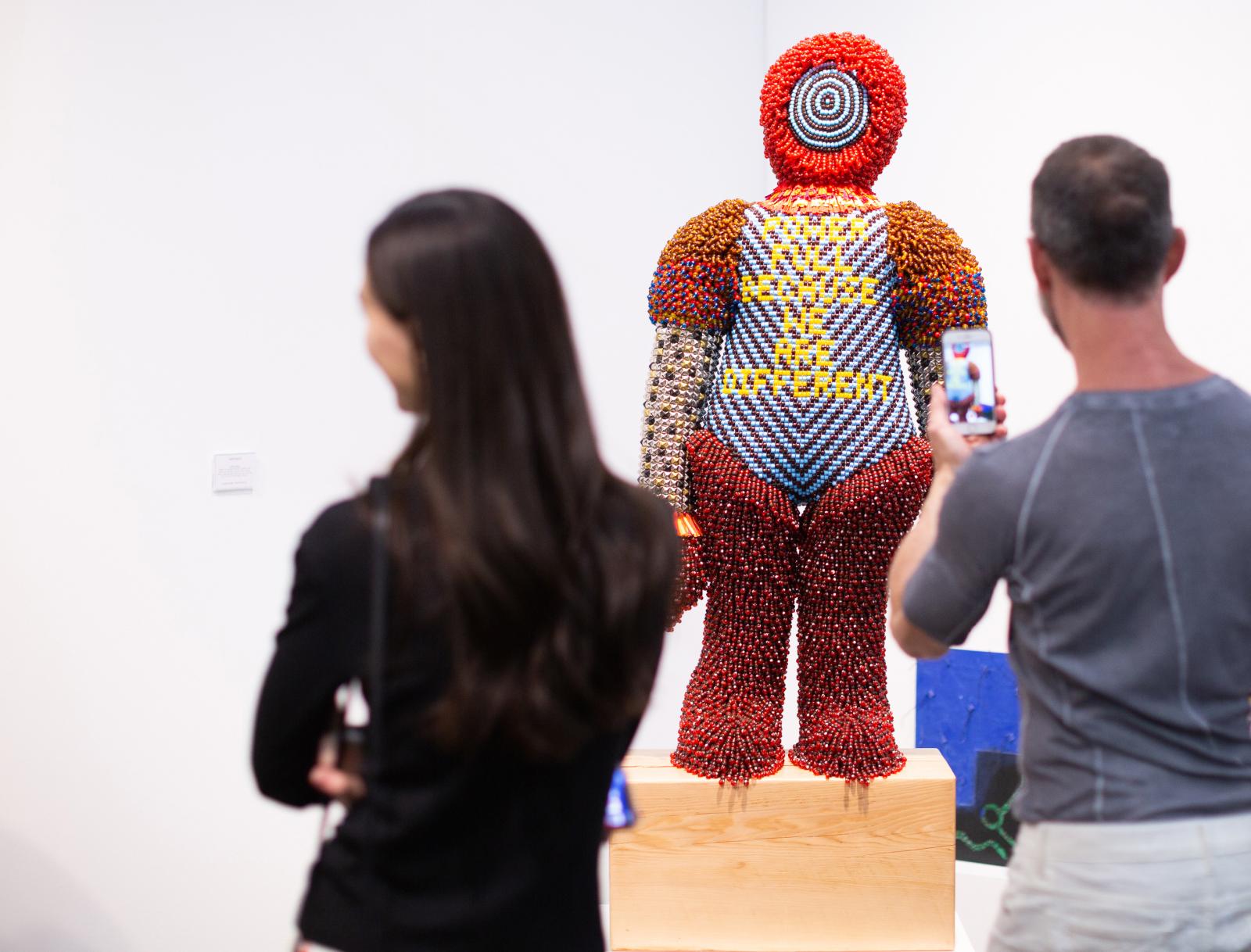 At Piers 90 and 94 in New York City, over 180 modern and contemporary art galleries from some 30 countries welcomed several thousand visitors. The 26th edition of the Armory Show passed without incident, in compliance with the necessary precautions, despite a global situation marked by the spread of the Covid-19 virus.
Admittedly, attendance was slightly affected, but the leading collectors, mainly local, reported present. And even if Wall Street was going down, art sales seemed to do more than just hold up. An initial assessment straight afterwards revealed that the Denny Dimin Gallery (Lower Manhattan), participating for the first time, made sales worth over $100,000 on the opening day alone, and the Victoria Miro gallery, an Armory Show regular, recorded about fifteen transactions. The London gallery Cristea Roberts, a loyal visitor for the past twelve years, also sold works worth over $1 million on the opening day, while Zeno X placed a piece by Luc Tuymans for $700,000. On the whole, exhibitors were very happy after the five days of the fair. In addition to New York's major museums, more than 140 American and foreign cultural institutions were represented. The mood was also buoyant among dealers, with the prospect of the Armory Show changing its dates and venue in the near future (the next edition will be held at the Javitz Centre in central Manhattan from 5 to 12 September).

Good Business and Sophisticated Collectors
"We have always thought this fair was a real hub and an ideal place to meet new customers," said José Graci of the Mazzoleni gallery, based in Turin and London. "Its public is always of high quality," added Berlin gallery owner Thomas Schulte, acknowledging that he largely achieved his objectives. "I think overall attendance was down, but the people who were really interested were there," said Dorian Bergen of the ACA. "We couldn't have imagined a better audience," said New York dealer Ronald Feldman, while his young colleague Deborah Oster Pannell of the C24 gallery (Chelsea) said she was impressed by the "calibre of the collectors."
The stand dedicated to British artist Tim Braden by Jeffrey Lee of the Ryan Lee Gallery (New York) was also a hit, selling fifteen paintings for between $6,000 and $24,000. "Despite the coronavirus, our collectors were not put off," said Mihai Nicodim of the eponymous gallery in Bucharest.
"The sales were worth the effort of bringing the works over from Europe," said André Buchmann, a German art dealer. Bernard Jacobson was delighted with the way his retrospective of British artist William Tillyer was received: "I've been representing him for fifty years, but I felt for the first time that people were beginning to really appreciate his importance."

Using the Fair as a Platform
"Between $300,000 and $400,000" was the turnover announced by the Dutch art dealer Ron Mandos, who showed works by Esiri Erheriene-Essi, among others. A happy outcome too for Takako Tanabe of the New York Ulterior gallery, whose works by emerging artists all sold, at prices between $4,500 and 11,000. The same applied to Yancey Richardson, another local who specialises in photography: "Our biggest and most expensive works all went." "We sold one sculpture by Niyi Olagunju and all but one painting by Nkechi Ebubedike," said Ayo Adeyinka of Tefata in London, a specialist in African art, while Maggie Kayne of the California-based Kayne Griffin Corcoran gallery said she was delighted to have "placed works by Mary Corse and Mika Tajima in leading collections" and to have used the fair as a platform. "We achieved what we set out to do," said Fabrizio Padovani of the Bologna-based P420, referring to the sale of a work by Irma Blank at $140,000 and all Adelaide Cioni's "ice lollies", at $10,000 each.
Video art galleries seem to have done well too. Elle Burchill of Microscope Gallery confirmed this, adding: "Sales of animated works tend to happen after fairs, especially where institutions are concerned." With its functional sculptures from the Atelier Van Lieshout, the Carpenters Workshop Gallery also appealed to the New York public, as did the Ascaso gallery, which showcased the work of two visual creators who have been decisive in the development of Latin American contemporary art: Carlos Cruz-Diez and Luis Tomasello: "We closed our sales very quickly," says Antonio Ascaso.
"Even though we didn't sell at the stand, we are expecting transactions in the near future," says the optimistic Californian dealer Peter Blake, who was very happy with his meetings with "sophisticated collectors" and 100% in favour of an Armory Show at the Javits Centre next year. Brian Balfour-Oatts, from the post-modern London gallery Archeus, was not totally content with his sales - he showed works by Soulages in particular - but also remained hopeful because of the contacts he made. In any event, the Armory Show must go on!