In March, the brilliant historian and brother of writer Marie NDiaye was appointed Director of the Palais de la Porte-Dorée, which houses the National Museum of Immigration. He aims to make it a place of reflection and dialogue where "burning questions" can be addressed in order to understand our history better. 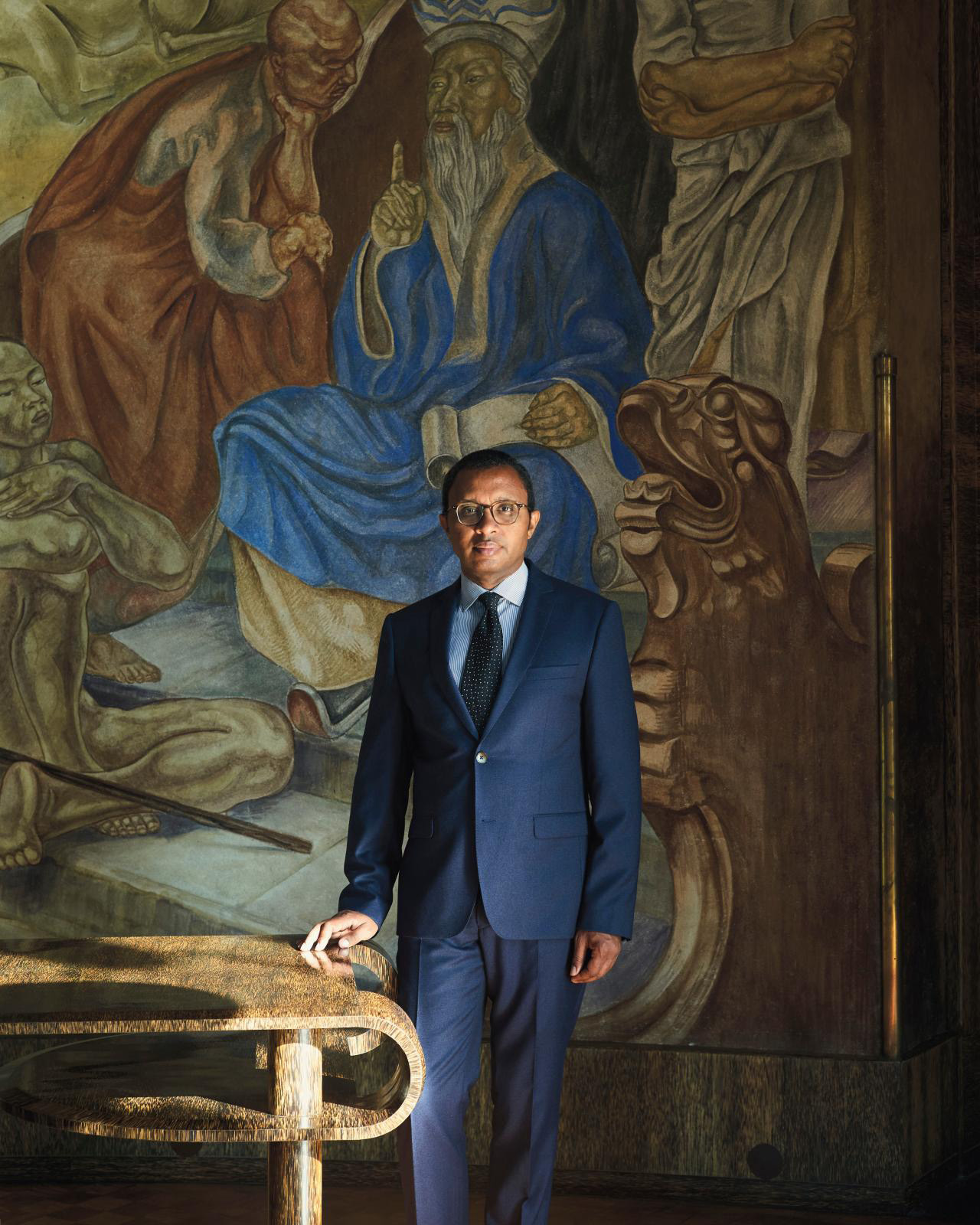 Why did you leave Sciences Po to become the director of an institution with a turbulent past that now stands at the forefront of migration issues?
It’s a direct extension of my academic career. I’m a historian specializing in the minority community, whose place here at the palais de la Porte-Dorée (Golden Gate Palace) is obviously of primary importance. I applied for the job because I felt it was a good fit and I could help make the museum an even more prominent place of culture and reflection than it is today. I’d add that my interest in culture runs deep. I was scientific advisor to the Musée d'Orsay’s 2019 “Black Model” exhibition, which focused on the depiction of Blacks in the visual arts, and recently co-wrote a report on diversity at the Paris Opera with Constance Rivière (editor's note: Secretary-General of the Human Rights Defender).

Nevertheless, didn’t this symbol of colonial France put you off?
Not at all! To me the palais de la Porte-Dorée is the ideal place to grasp the issue and better understand certain facets of our history, provided, of course, that there’s education, contextualization, etc. We explain to visitors that it’s not just one of France’s most beautiful Art Deco landmarks, but was also a tool of colonial propaganda. The exterior bas-reliefs and interior frescoes celebrating “France as Civilizer and Colonizer” do not match historical reality. Not a trace of domination or violence can be found in them. When visitors admire the Africa Room’s ebony parquet floor, we remind them that the logs were prepared by forced laborers before being shipped on the Congo or Gabon Rivers. This architectural gem, which stood abandoned for too long, must be restored but also explained. Fortunately, the work is already underway. As part of the "France Relance" plan to boost the energy efficiency of public buildings, seven million euros have been earmarked to make the roof more waterproof and update the ventilation, heating and lighting systems. A heritage renovation plan is also being studied.

Could you tell us something about the building’s history? Didn’t politicians ignore it once the 'glorious' colonial period was over?
In fact, it has echoed France’s history for 90 years, housing the musée des Colonies (Museum of the Colonies), the musée de la France d'outre-mer and the musée des Arts d'Afrique et d'Océanie (Museum of the French Territories and the Museum of the Arts of Africa and Oceania) until closing in 2003 in preparation for moving the collections to the Quai Branly museum desired by Jacques Chirac. It was Chirac who, reacting to the rise of the far-right, launched the idea of the Cité nationale de l'histoire de l'immigration. It moved into the palais de la Porte-Dorée, which happened to be empty. The museum opened in late 2007 at the start of former president Nicolas Sarkozy’s term, but, being focused on “national identity", he wasn’t interested in it. In 2012, the Cité became the musée national de l'Histoire de l'immigration (National Museum of the History of Immigration), which President François Hollande inaugurated in 2014. I hope to help make it a place that matters as much as possible. Our official purpose is to showcase immigration, an underestimated part of our history even though one French person in four is an immigrant or the descendant of one. I want it to be a space of reflection and dialogue open to all. My mother is French and my father Senegalese. Personally, I’ve never suffered from the structural racism or discrimination that might have seriously affected me. But those issues must be calmly discussed based on the findings of researchers.

What are the principal themes in your temporary exhibition program?
They allow us to cultivate our specificity. We plan to devote a show to the 1931 Colonial Exhibition, which will stretch out over the Bois de Vincennes, and another to Asian immigration, which has been quite prominent since the First World War yet has been overlooked by scholars. We’ll also continue artists' exhibitions: our perspective is different from that of fine arts museums, even when we work with them. An example is the Picasso Museum, our partner for the “Picasso l'étranger" (“Picasso the Foreigner") exhibition, which starts in November. It will shed light on a little-known aspect of the Spanish painter’s life: the hoops he had to jump through as a foreigner in France. The newly renovated tropical aquarium right inside the building mustn’t be forgotten. Part of the colonial project, it showcased the Empire’s undersea riches. While still a wonderful sight to see, today it has an additional purpose: to raise public awareness of environmental and conservation issues. Its director, Charles-Édouard Fusari, calls it a Noah’s Ark because of its role in helping to protect endangered species.

The permanent exhibition is being redone...
It had to be. Knowledge has expanded since 2007. The previous exhibition, which was thematic, started with European immigration in the 19th century. The new one, opening in autumn 2022, will offer a wider historical and geographical perspective punctuated by 11 chronological focused sections. It will start in 1685, an important date on two counts. That year saw the publication of the "Code noir" ("Black Code"), which governed the status of slaves and fueled the growth of the transatlantic slave trade, and the revocation of the Edict of Nantes, which drove 200,000 protestants into exile. It will end with the great migrant crisis of 2015, when the number of crossings and deaths in the Mediterranean Sea peaked. The last section will focus on current events. Expanded and completely renovated spaces will house the collections that the museum has had to create from scratch starting in 2005. The exhibits will pull out all the stops, mixing digital technology with historic records, administrative documents, memory-laden objects, photos, films and works by contemporary visual artists such as Barthélémy Toguo. In a small music room, visitors will be able to hear songs by artists from other countries, such as Armenian-born singer-songwriter Charles Aznavour and French rapper MC Solaar.

Is the palais de la Porte-Dorée turning a new corner in its history?
Attendance was already up before the Covid pandemic. In 2019, the last "normal" year, it surpassed the record figure of 500,000 visitors, the same level as the Picasso Museum in Paris and Mucem in Marsailles. However, we must raise our profile, especially internationally. I’m sure many tourists in Paris are looking for places that are less famous than the Louvre and the Arc de Triomphe. Given the diversity of our offerings, exhibitions, permanent collection, panel discussions and live performances, it is my hope that soon people will head to the Porte-Dorée as they do to the Centre Pompidou, saying to themselves, “It’ll be interesting no matter what!”

The Miraculous Door of the Hôtel de Ville
Newsfeed
See all news
French PCF Deputy Fabien Roussel Opposes the Sale of a Zola Manuscript
The "Printemps de l'Art Déco" Announces its Dates and Program
Preemption: The Art Nouveau Bench by Eugène Gaillard for the MAD
Berlin State Government Seeks to Strengthen Culture
Not to be missed
Interviews
Amin Jaffer: Curator of the Al Thani Collecti…
The delights of the fabulous collection of Sheikh Hamad Bin Abdullah…
Interviews
Françoise Gilot, Life Story of an Artist and a…
On the eve of her 100th birthday, Paloma and Claude Picasso’s mother…
Interviews
Caroline Jollès, Patron of Design
In 2011, Caroline Jollès, who is very involved with the Quai Branly…
Interviews
Sebastião Salgado: "Photography Has Been a Way…
In a career spanning nearly five decades, Sebastião Salgado has…