You need to look up to appreciate the fine collection of signs at the Musée Carnavalet, particularly the ones acquired at auction. 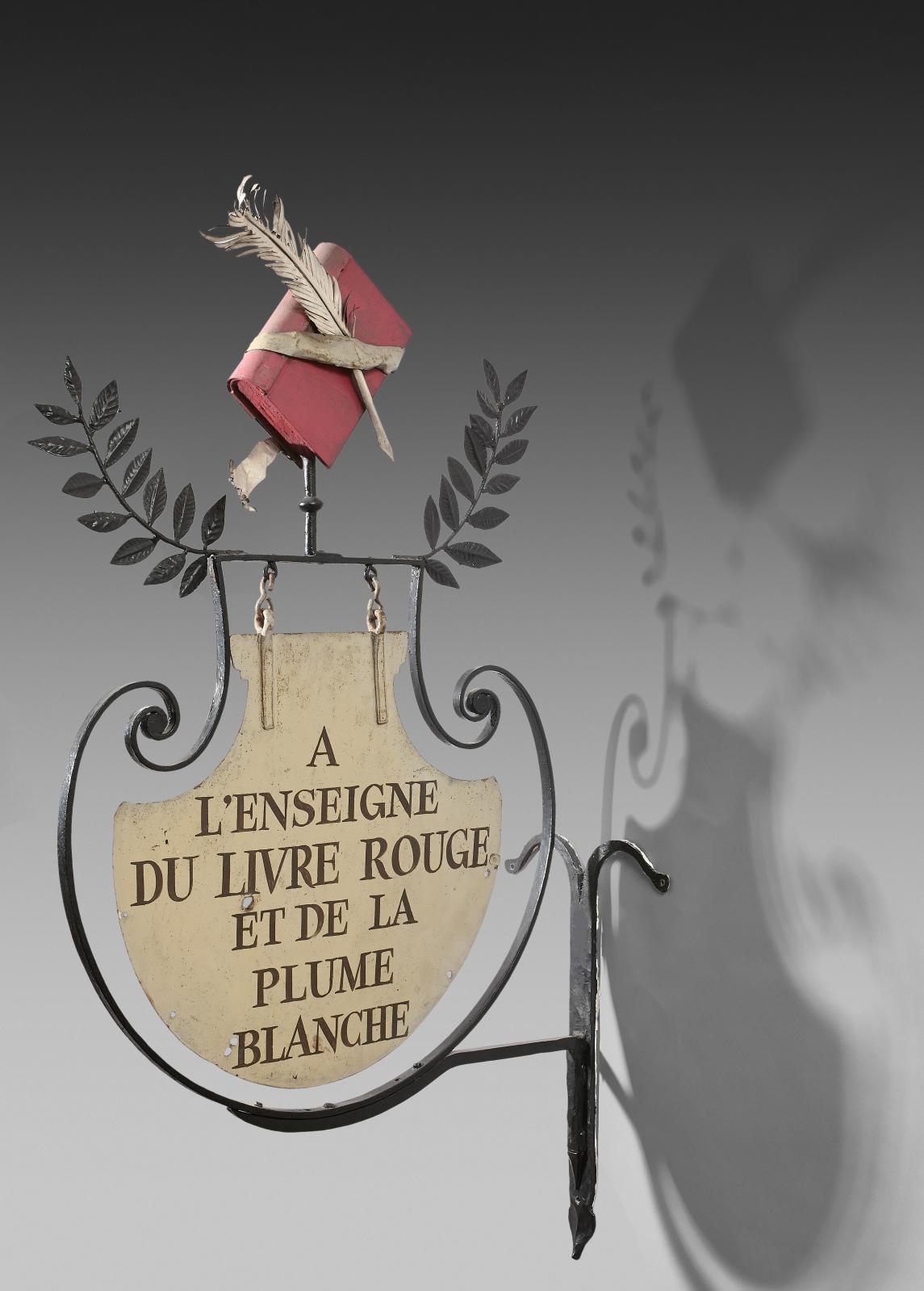 On May 30, after over four years' restoration work complicated by the pandemic, the Musée Carnavalet was able to fling wide its doors once more. After crossing through the entrance pavilion, visitors come to the sign gallery, now magnificently restored—walls, containers and all—and walk under banners which, through they wave in the Parisian breeze no longer, have found a resting place here worthy of their history. Characterizing the urban landscape as much as fountains, public benches and news-stands, they are now displayed in two rooms, suggesting a stroll down a Paris street and inviting us to wander from one shop to another. Already before the Commune of Paris, in the chaos of the demolition work, the fledgling museum (begun in 1866 and opened in 1880) saw the lack of interest in them, and starting collecting a large number. In July 1914, a room was dedicated to them through the decisive action of curator Georges Cain, and was even inaugurated by the President of the Republic, Raymond Poincaré. With a wealth of forms, colors and materials, these banners provide an agreeable walk through the Paris of yesteryear and, above all, evidence of the history of Parisian trades and commerce before the First World War. Today, the Paris museum no longer tracks them down in the streets, but at auction.

Picturesque Witnesses
At the sale of Roxane Debuisson's collection with Lucien Paris at Drouot on March 18, 2019, eight signs were preempted by the museum: a considerable effort in terms of budget, but worthy of the heroic collector, a lover of the working-class Paris of yesteryear, whose traces she pursued tirelessly to keep it from vanishing forever. One thing led to another, and the quest of this unrivalled and inspiring collector became more widespread. Friends, acquaintances and anonymous people would contact her whenever they heard of anything that could be rescued. Her first finds in this Herculean task were signs; then came street name plates, urban furniture, metro components and paintings. They certainly tell a story: that of the former Paris, the city that saw the upheavals of Baron Haussmann's urban makeover. One hundred years later, between 1960 and 1970, Roxane Debuisson saved this picturesque heritage.

The museum, "always very attentive to the market," says Marie-Laure Deschamps, head of the Decorative Arts department, wanted to acquire ten of them. Unfortunately, the sign of "À l'Éléphant", a manufacturer of café and bistro supplies, was too expensive and slipped through its fingers. "That's still a real regret," she says. However, the institution was able to carry off a few choice pieces, including a pair of gilt iron sculptures in the round designed for a snail merchant in the Les Halles district, "Lazare successeurs", for €12,750; "Au Gant d'or", a gilt iron sign for a glovemaker in Boulevard Beaumarchais (€5,625); "À l'Auvergnat de Paris", a wine, coffee and coal store sign (€1,125); "Sainte Eugénie", advertising a laundry in Rue de Charenton (€500); "À l'enseigne du livre rouge et de la plume blanche", a sign for a bookstore (€4,000: see photo), and finally that of an umbrella merchant in Rue du Pont-Louis-Philippe (€1,375). These six pieces in painted sheet metal date from the late 19th century. Meanwhile, a lantern factory sign comes from the Art Nouveau period (€3,125), and a hairdresser's, simulating a rolled parchment, from the 20th century (€3,125).

"The new presentation circuit was already worked out at the time of this sale," says the curator, "which is why today only one (the bookseller's) is permanently on display," but the museum has started up a special exhibition called "the object of the month," and plans to devote one shortly to the Debuisson collection. Another aspect it wants to highlight is the restoration of the signs in the circuit. All have benefited from the generous patronage of three private companies and a crowdfunding campaign that mobilized numerous anonymous enthusiasts and raised nearly €40,000. "A first—and definitely worth a replay!"

Small Monuments
Popular since the Middle Ages, signs speak of a time when illiteracy was the rule, and the numbering and naming of streets non-existent—this only began in 1728. So almost every business—dealing in clogs, chessboards, tin pots, crowbars and so on—put up its own sign as a way to stand out. Over time, it became customary to give streets the name of their main store. The installation of their name plates became strictly regulated during the 17th century, after numerous excesses. For instance, French writer Tallemant des Réaux tells of the quarrel between an innkeeper in Rue Montmartre, whose sign was "Tête-Dieu" (referring to Christ's face on Saint Veronica's veil), and the priest of Saint-Eustache, who had the devil of a job getting him to take it down... The cheeky beauty involved certainly conveyed the image of a free capital boldly using play on words and riddles to catch customers' attention.

In the early 20th century, many fortunately well-informed owners gave pieces to the museum—which did not always take note of their provenance, things being different then. Count Louis Clément de Ris (1820-1882), a scholar and history buff, was one of the people who devoted a book to them (and there were many in the 19th century, notably Édouard Fournier who elevated them to the rank of "small monuments"). This was in 1869. His conclusion is a positive premonition: "I miss and will always feel nostalgic for signs; but when I read the versified leaflets distributed on bridges, I foresee that in a hundred years from now, what seems to me a sacrilege will be considered the infancy of art for historians of advertising. To conclude, I can only wish them as interesting a journey through the streets of Paris in 1969 as can still be enjoyed in 1869."