Lee Ufan Arles has just opened in the Hôtel Vernon, a hôtel particulier (private mansion) where his minimalist works are in their element. A look back at this sumptuous collection that embodies the essence of his philosophy. 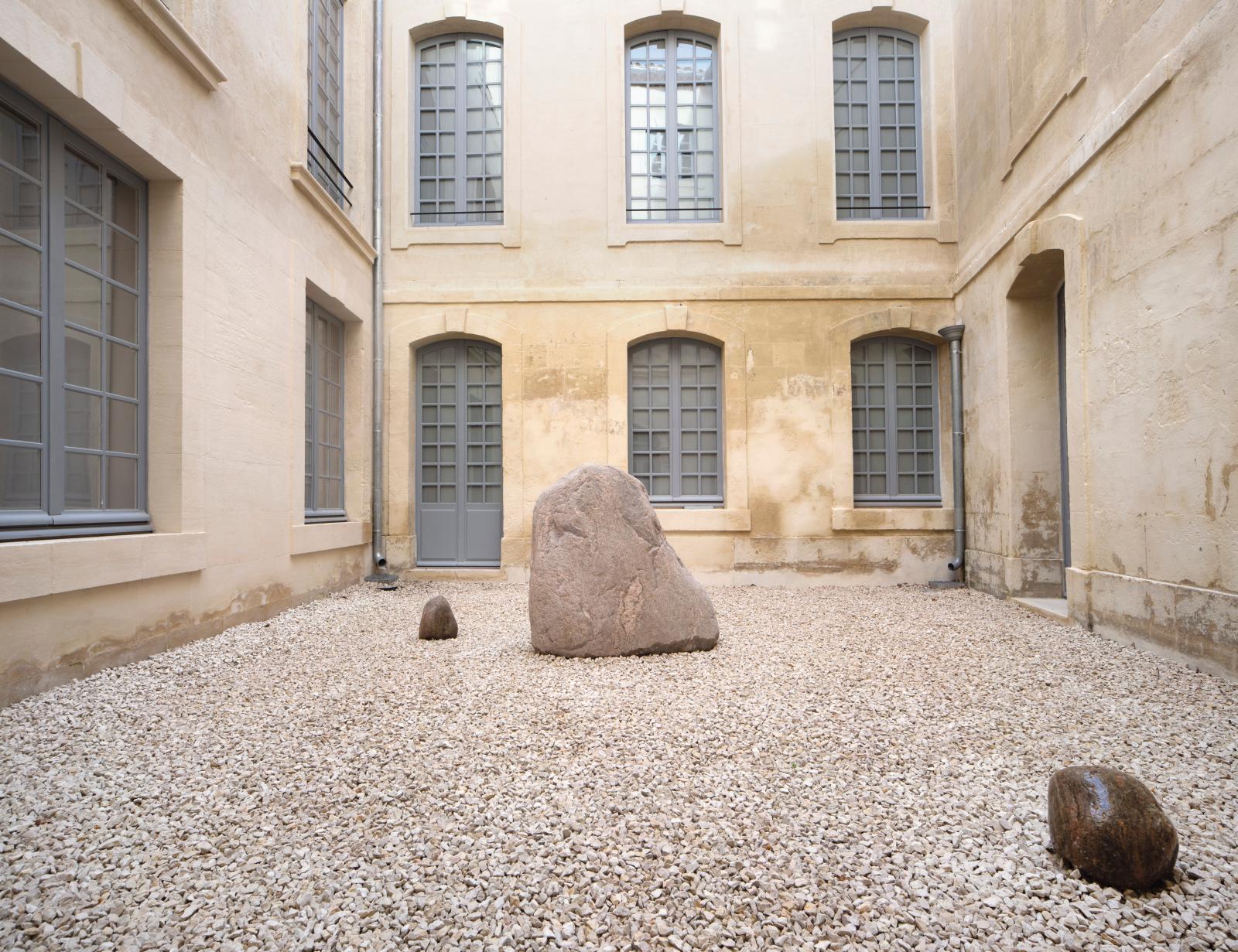 South Korean artist Lee Ufan no longer needs an introduction. Held in high regard by collectors and institutions worldwide, the leader and theorist of the Mono-ha movement—literally the "school of things"—is regularly celebrated by major exhibitions, including at the Guggenheim Museum in New York in 2011, the Château de Versailles in 2014 and the Centre Pompidou-Metz in 2019. In France, where he set foot for the first time in 1971 to attend the Biennale de Paris, Lee Ufan had a small studio in Montmartre for about 30 years. After the creation of the Lee Ufan Museum in Naoshima (2010) and the Lee Ufan Space in the Busan Museum of Art (2015), the visual artist, now 86 and supported by the kamel mennour Gallery, among others, is setting down deeper roots in Europe with the establishment of a new space in Arles. The Lee Ufan Arles Endowment Fund resulted from encounters, harmony and lucky breaks in the historic, memory-filled Provençal city. “I first came to Arles, which at first reminded me of Vincent Van Gogh, after going to the Mont Sainte-Victoire in about 1975,” he said last autumn on a visit to the Domaine des Étangs de Massignac. “At the time, I really didn’t realize what was going on there. Later, when I met the Actes Sud publishers Françoise Nyssen and Jean-Paul Capitani to plan the "Dissonance" show at Saint-Laurent Le Capitole Chapel in 2013 and, then, when they published my first French monograph, I started feeling a connection with the ancient Roman city. Strolling through its streets, necropolis and ancient ruins stirred my imagination. At the time, I was trying to set up my foundation in New York, but it was really hard to find a suitable location in the heart of that sprawling megalopolis. Meanwhile, my friend Michel Enrici, former director of the Maeght Foundation, spoke with Actes Sud about the project and the complexity of carrying it out. He suggested that I consider Arles. This lucky break allowed me to create a new place devoted to my work in a city on a human scale." Based in New Jersey, StudioLeeUfan got no help to fund the new entity. In 2017, it bought the Hôtel Vernon, owned by a family of antique dealers since 1920, whose historical aspect attracted the artist. "I felt the sense of time very strongly in that 17th-century building in the historic city center,” he says. “I wanted to respect that history by intervening in a minimal way." The Constance Guisset Studio gave the building a subtle makeover and created reception areas in harmony with it. Then, Lee Ufan asked his good friend and 1995 Pritzker Prize winner Tadao Ando, who designed his museum in Naoshima, to help him create Relatum-Ciel sous terre (Relatum-Sky Underground), which opens the exhibition. The three-level space covering 1,350 square meters (14,531.3 square feet) houses about 60 works, including a dozen installation-sculptures, paintings, inks, watercolors, drawings from his personal collection and a Zen-like courtyard with the stone piece Relatum-Fontaine en pierre (Relatum-Stone Fountain).

An Art of Resonance
On the first floor, a statue of the Roman emperor Antoninus Pius found during the excavation work appears to stand watch over the two friends’ imposing achievement, which has the Japanese architect's fingerprints all over it. The tall concrete spiral is experienced in the dark and ends with a short video of cloudy skies on the floor acting as a transitional airlock before entering the world of different spaces. “Lee Ufan's work is one of resonance and encounters,” says Jean-Marie Gallais, curator of the 2019 Metz exhibition and an expert on the artist. “It fosters a relationship between the material, the space and the viewer’s body.” The same can be said of other "Relatum", installation-sculptures emblematic of his philosophy and practice, in the next rooms. Infinity of the Vessel, Chemin vers Arles (Road to Arles) and Séparation translate, among other things, the relationship between non-doing, i.e., nature in its rough form, only buffed by the elements, and doing, that is, industry, represented by metal. Gently-shaped stones and shadows painted on the floor, white gravel, waterdrops falling into a basin, glass broken under the weight of a rock and a steel plate that rises and bends to infinity help create a poetry of purity and subtle plays of light. On the second floor, "From Line", "From Point" and "With Wind"—three series from the 1970s to ‘90s—as well as large, more recent paintings bring the artist’s slow strokes, repetitive line and pictural asceticism to a climax on canvases or even right on the wall. He has gone back to using the colors orange, blue, black and white, sometimes blending them together into increasingly vibrant strokes. Lastly, a 2022 work alone in a small room creates a dialogue between a blank canvas and a stone, seeming to bring together all forces acting in the interstices of his oeuvre: time, emptiness, silence and space, which translate the philosophical and aesthetic concept of ma ("interval" in Japanese). Ma is also the name of the building’s third floor, which, come autumn, will host temporary contemporary art shows. "Lee Ufan will be quite involved in the process of selecting the artists, although no choices have been made yet,” says Juliette Vignon, the institution’s director. A few months ago, the artist remarked: "Perhaps we’ll show sculptures and photographs because Arles is famous for the ‘Rencontres’ photography festival, but we’ll never hold any major historic exhibitions." In Arles, displaying a collection that usually requires large spaces to be fully appreciated was a major challenge, but the Hôtel Vernon fits the bill—proof, if any were needed, that Lee Ufan’s work can adapt to any setting without ever losing its power and serenity. Alongside the Rencontres Photographiques and the Luma, Vincent Van Gogh and Manuel Rivera-Ortiz Foundations, the new institution, which questions its desire to leave a trace in history, will help strengthen the city's place on the map of European art capitals.

A Painting by Lee Ufan Makes its Debut at Auction