Now Embarking for Cythera with a Drawing by Watteau

Jean-Antoine __TexteRechercheEnGrasWatteauTexteRechercheEnGras__’s reception piece for the Académie Royale is a stunning depiction of his fêtes galantes, which he meticulously prepared through several studies, including this wonderful pas-de-deux in red chalk… 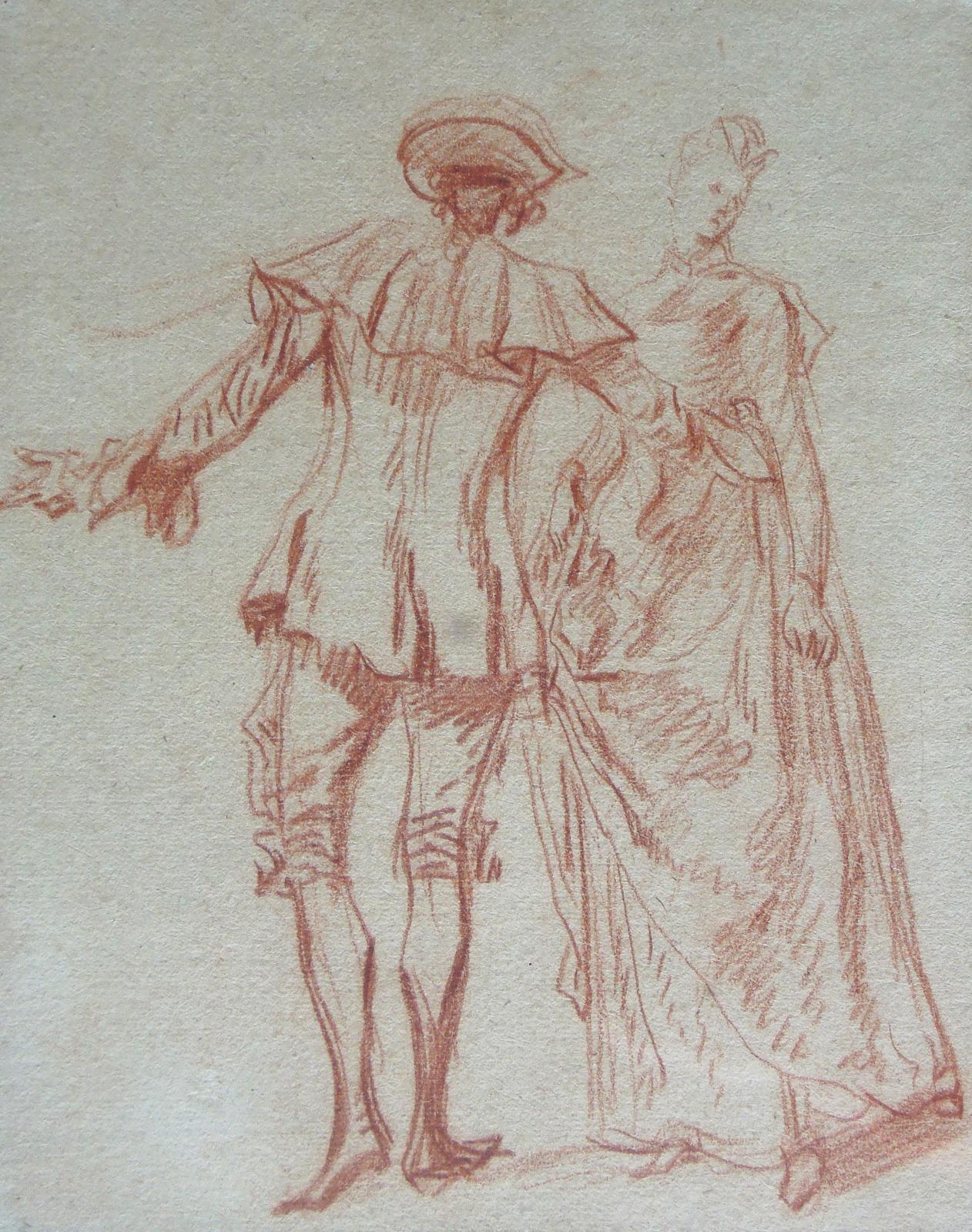 In a few decisive strokes, the artist portrayed every expectation of a pair of lovers, the man, dragging his beauty by the waist, while the woman still hesitates as she turns around. There is an air of déjà vu in the delicate red chalk, but it should not be surprising because the two lovers make up the central motif of one of the masterpieces of French painting: The Embarkation for Cythera by Jean-Antoine Watteau. The sheet is part of a set of seventeen preparatory drawings documented to date and executed for this famous Pilgrimage to the Isle of Cythera—the original title of the canvas. Beyond the incredible magic that emerges from the final composition, this animated panorama of gallant characters was also Watteau’s reception piece (a work of art by an artist to an academy for approval as part of the requirements for admission to membership) for the Académie Royale. An official event, however, turned out to be somewhat chaotic, because while the artist joined the Académie on July 30, 1712, he would not deliver his work until five years later (and after three reprimands), on Saturday, August 28, 1717. The painting, exhibited in the assembly hall of this prestigious institution, then went to the Musée du Louvre, while a second version painted in 1718 was displayed on the walls of Schloss Charlottenburg in Berlin, after it was bought by Frederick II, where it remains today. Exceptionally, the subject of the composition painted in eight months was chosen by the artist, who finally opted for a pilgrimage to Cythera, an island famous for the temple of Venus in the literature of the time.

A Tribute to the Goddess of Love

While “pilgrims” are one of Jean-Antoine Watteau’s favorite subjects, they are not the mystics in tatters then found in the streets, but rather elegant with well-dressed suitors. At the beginning of the 18th century, this allegorical theme was very popular and had its followers, such as François Boucher and Alexis Grimou. The painter from Valenciennes is said to have been inspired by Dancourt’s fashionable comedy, Les Trois Cousines, created in 1700, where marivaudage is unraveled by a visit to the shrine of the goddess of Love. In any case, the red chalk, showing slight differences from the group of the painted version (such as the absence of a stick for the pilgrim and an elongated body for his companion), reveals a faultless course, since its appearance on the art market at the end of the 19th century. It was rediscovered on the occasion of the dispersal of the Georges Mühlbacher collection, from May 15 to 18, 1899 at Galérie Georges-Petit (no. 310). It then reappeared at the Léon Michel-Lévy auction on June 17 and 18, 1925 at the same place (no. 112), before entering the Parisian collection of Jean Labbé in 1939, and remaining in his estate until today. This did not prevent the drawing from making numerous appearances at landmark exhibitions, the most important of which was the monographic exhibition at the Grand Palais in 1984-1985. Naturally, this essential sheet figures prominently in A. Watteau (1684-1721). Catalogue raisonné des dessins (Gallimard, 1996, fig. 514), the introduction written by Watteau specialists Pierre Rosenberg and Louis-Antoine Prat.