Turquin's latest discovery is a red-letter event: there are very few of these ambitious compositions with extremely sophisticated messages by the 17th century Dutch painter. 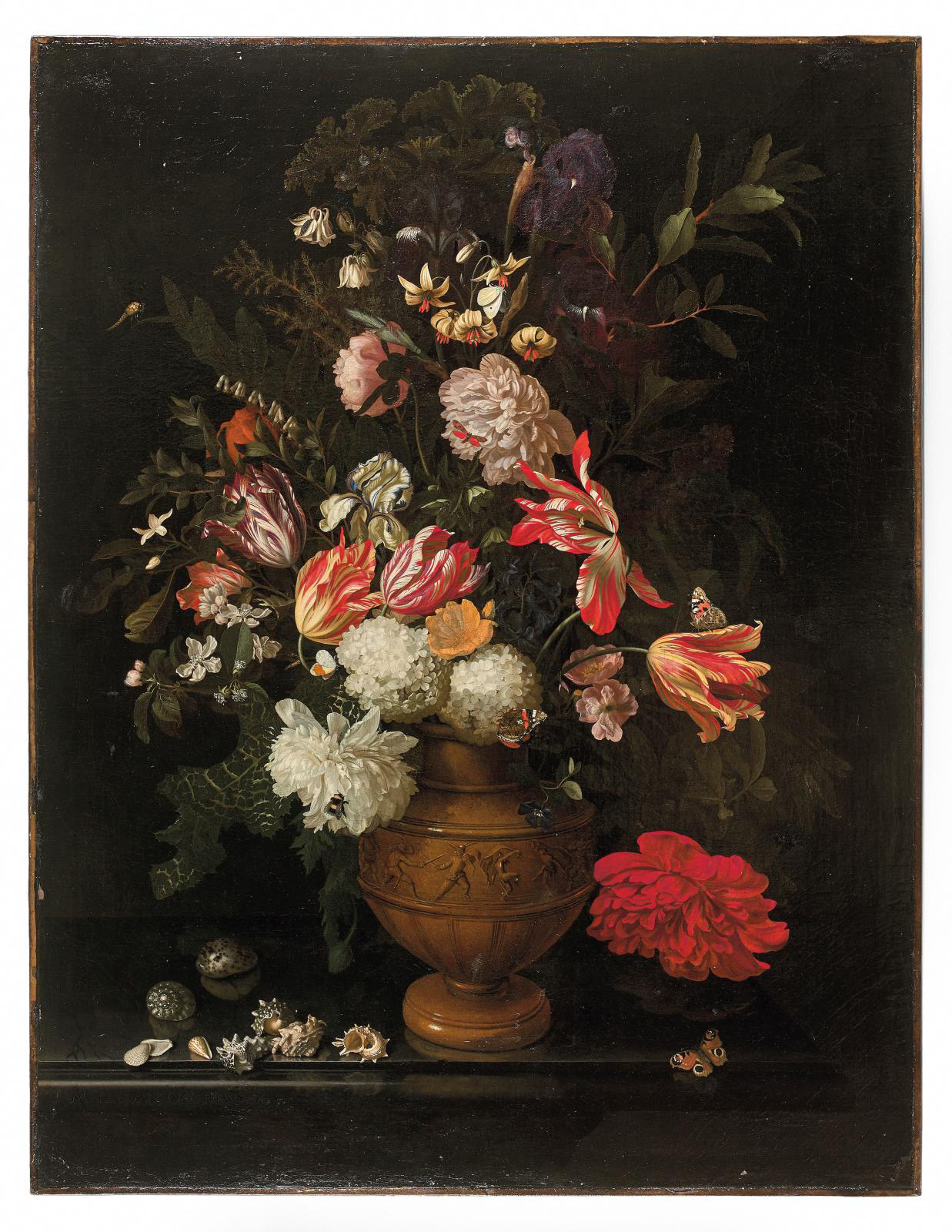 Maria Van Oosterwyck's career was remarkable. The pastor's daughter, born near Delft, probably listened to wise advice from the families of her mother and her father's second wife, who both came from artistic backgrounds. According to her first biographer, Arnold Houbraken, she earned her spurs in Delft and Leiden, then studied in Utrecht with Jan Davidsz de Heem. In 1666, she moved to Amsterdam to continue her studies with Willem Van Aelst, rejecting his advances (again, according to Houbraken) to devote herself solely to painting.

The Favors of the Great and the Good
She soon earned a glowing reputation, and when the future Cosimo III de' Medici visited the Netherlands in 1667, he bought two of her still lifes. Shortly afterward, Leopold I of Habsburg in turn acquired one of her vanitas paintings (now in the Kunsthistorische Museum in Vienna). The Holy Roman Emperor and his wife were apparently so delighted that they sent her their diamond-set portraits as a token of their esteem. The artist was so celebrated that she received commissions from most sovereigns of her time. But while two of her paintings feature in British royal collections, the works Houbraken claims were bought by the Kings of France and Poland are unfortunately not documented. The fact remains that her career, on the fringe of the Amsterdam guild, which did not admit women artists, earned her a fine living, even enabling her to buy the freedom of Christian prisoners enslaved by "heretics".

A portrait, which has not been located today, and which was owned for a time by Gérard de Lairesse, showed Maria Van Oosterwyck (1630-1693) with the poet Dirk Schelte, who in 1673 dedicated a poem to her lauding her art and its virtues. Another by Wallerant Vaillant, now in the Rijksmuseum in Amsterdam, shows her with a palette and a Bible.

A Polysemous Style
In the still life found by the Turquin auction house (soon coming up for sale in Troyes), Maria Van Oosterwyck left nothing to chance. The work could be an invitation to poetry and travel. One key to its interpretation would be to list the learned and specialized names of the shells placed just above the artist's signature: Conus spurius, Turbo, Anadara granosa, Cypraea tigris, Lambis lambis, Cerithium nodulosum, and so on. A description of the contents of the Rhine stoneware vase is just as fascinating, with white columbine, rose of Provins, Gesner's "Viceroy" tulip, bluebells, red, white and Elaeagnus peonies, guelder rose, blue iris, yellow iris and yellow tree peony.

This profusion of exceptional seashells and flowers is perhaps much more than a simple aesthetic assemblage highlighting the treasures of Amsterdam cabinets. The artist may in fact have been ridiculing the connoisseurs who strove to classify every specimen and species, thinking they encompassed the whole of the natural world. Nature evades our desire to tame it. In her Vanitas with Globe, now in Vienna, Van Oosterwyck seems to mock the pretensions of scientists, whose instruments cannot help them embrace the universe in its entirety. Life is fragile, our knowledge and will severely be tested—and above all, we are short of time. The bouquet is there to remind us of this. Even if it is based on studies (the flowers it contains do not all bloom at the same period), the presence of insects suggests that it is indeed alive and that its vibrancy will soon inexorably fade. But while this assemblage seems to signify the main subject of the painting from a distance, the viewer, discovering the shells, begins to discern a more mysterious message that is not spelled out explicitly by the artist. This is the whole art of Maria Van Oosterwyck, whose success might be explained by her subtle combination of different components on her marble entablatures.

Intriguing Compositions
On one of her paintings recently bought by the Joslyn Art Museum in Omaha (USA), with five shells laid out next to a glass vase, the antique frame still has the hooks for hanging a silk curtain, which would have been drawn back in order to see the work and begin to decipher its hidden meaning. In her Flowers in a Decorative Vase (The Hague, Mauritshuis), a small statue of Venus looking at a bouquet surmounted by a sunflower gives the viewer pause for thought. The still life now in Denver is just as striking. The mere presence of an insect making its way towards the vase of flowers challenges and encourages us to interpret this moment suspended in time.

A Little-known and Critical Corpus
Meanwhile, the Bouquet of Flowers in a Rhine Stoneware Vase on an Entablature with an Arrangement of Shells could well contain a critique of 17th-century Dutch society. The shells brought back from faraway countries by the East India Company, and the exotic flowers, which amateurs loved to crossbreed endlessly, cannot fail to recall the dangers of this appetite for conquest and wealth.

Ironically, this vanitas, a reflection on the passage of time, must have needed long, long hours of work to achieve the exquisitely silky, shimmering texture of each tulip petal and the velvety softness of the foliage. This meticulous craftsmanship explains why Arnold Houbraken alerted his contemporaries, at the beginning of the 18th century, to the extremely rare character of works by Maria Van Oosterwyck... Today, her corpus is scarcely bigger than Vermeer's.

Lé Phô, Buffet, Desportes and the Master of Cortèges
Newsfeed
See all news
Madagascar: The Exhibition Space of the Fondation H Opens in 2023
Art Antwerp Is Gearing Up for Next Week
Les Filles du Calvaire Gallery Represents 4 New Artists
Collector Bernard Arnault Tops the Forbes List as Richest Person in the World
Not to be missed
Spotlight

A set of three collections of projects coming directly from Pierre-François...