This collection devotedly assembled over many years has a wealth of assets in terms of the range of pieces and jurisdictions, the legibility and identification of the hallmarks, the originality of the decoration and the age of the objects. 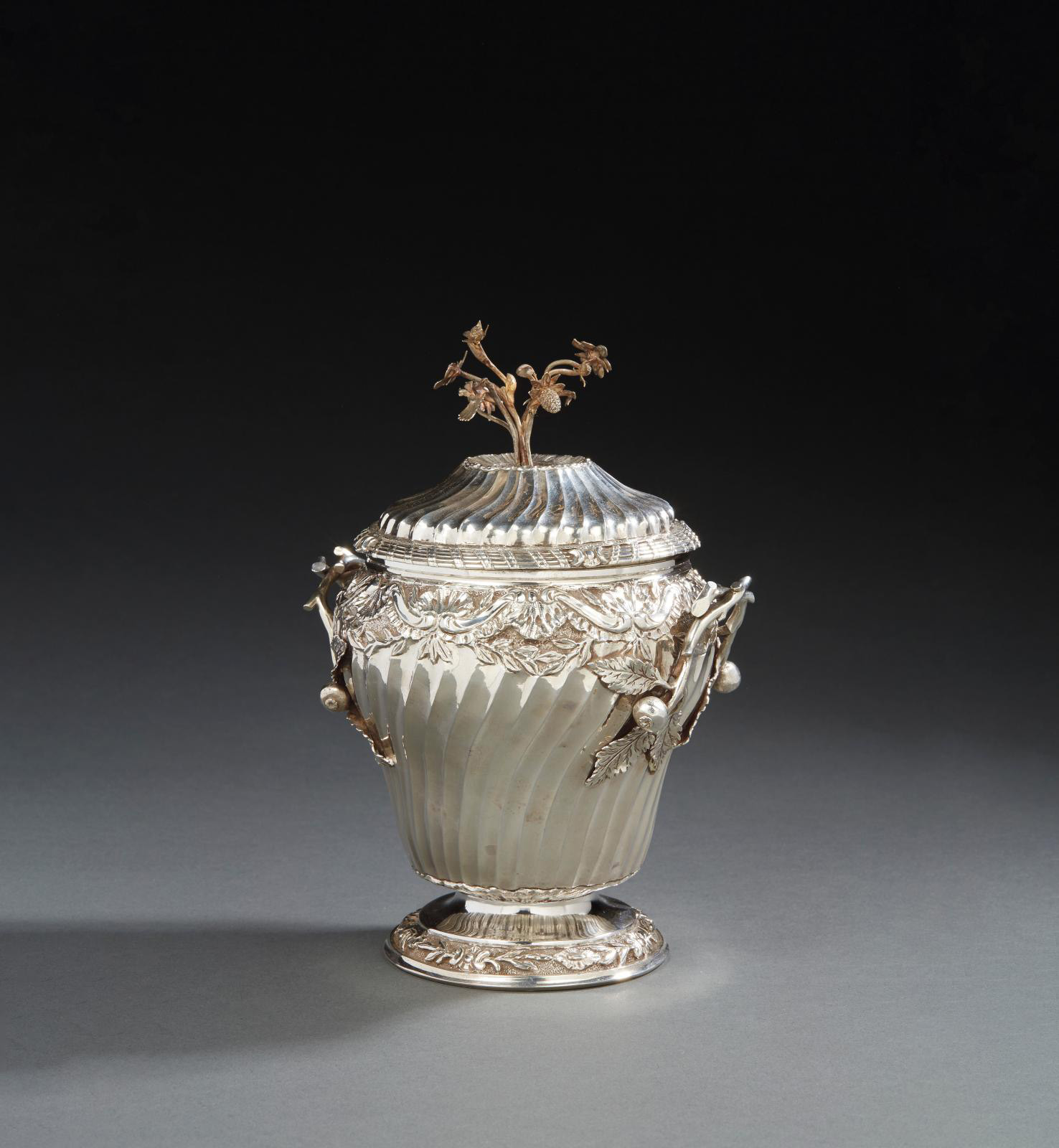 Sometimes it only takes a small thing… And it was almost by chance that this unobtrusive man, known in the tiny world of silverwork specialists as "Monsieur Marcel", set out on this journey. At the time, he was devoting himself body and soul to his ready-to-wear stores in Paris. However, when two of his colleagues died a few months after retiring, he realized that he, too, had perhaps put too much into his professional activity and that a hobby would be a good "distraction". Less fragile than glass or ceramics, silverwork is unchanging, can be restored and involves a huge area of study in terms of typology, the identification of hallmarks and the deciphering of coats of arms. The pastime he took up in the mid-1970s soon became a passion. Marcel Sztejnberg combed auctions, flea markets and other sources from Lille to Le Mans, Brussels to Reims and Toulouse, and the Porte de Clignancourt to the Porte de Vanves. At 84, he has lost none of his enthusiasm, even if he says he has "slowed down a bit." Urged by his sons, to whom he has transmitted the innocuous silverware virus, he has now decided to sell his collection, which contains several hundred pieces, including the 140 in this first sale. His collection reflects the energy he has poured into his passion for almost fifty years, traveling all over France. "This collection is a real journey, and a total delight for lovers of fine tableware and rare hallmarks," says Édouard de Sevin, one of the sales experts. "It is very disparate, but all the pieces are identified and many have been exhibited or published. The collector has achieved something truly magnificent," says his colleague, Claire Badillet.

Renaissance and 18th-century Silverwork
It has always gone without saying that Marcel Sztejnberg should loan, share and help people make discoveries. Museums in Lyon, Douai, Lille, Dijon, Arras and Brest have benefited from his treasures. There was no question of making them into a secret garden, like his paintings, royal almanacs, Mesopotamian seals, portor marble pedestals, Chinese and Japanese objects he bought as he went along. The guiding theme of his collection of silverwork was French work, with the accent on regional objects. This means that no fewer than 35 jurisdictions appear in the catalog—some extremely rare at auction—and many pieces from the 16th and 17th centuries often absent from the artistic landscape. However, he did not ignore Paris silversmiths, despite the mannered style of their works, or the 18th century—as witness a pair of candlesticks by Nicolas Delaunay, one of the leading artists of the last quarter of the 17th century and the beginning of the next, responsible for the silver vases and furnishings commissioned from Claude Ballin for Versailles. Very few of his pieces have come down to us (including a font now in the Louvre and an ewer in the treasury of Poitiers cathedral), and those from the period of these candleholders (1687-1688) still owned privately are naturally much sought-after (€35,000/40,000). Also from Paris, a spice box decorated with mascarons by Antoine Filassier and an eight-sided saltcellar by Théodore Chastelain (1670-1671) reminds us how desirable commodities like pepper, nutmeg, cinnamon and white powder were. The former is estimated at €15,000/18,000; the latter, published in Michèle Bimbenet-Privat's Les Orfèvres et l'orfèvrerie de Paris au XVIIe siècle, at €12,000/15,000.

From Lille to Perpignan
The collector seems to have favored two regions in particular: Le Nord and the Franche-Comté. Lille produced three outstanding goblets made for religious communities (Antoine Caulier, 1684-1685; €6,000/8,000), two of them marked with their owners' names (€6,000/8,000); Calais, a large oval dish with a scalloped rim (Antoine Willems, 1738-1748; €3,000/4,000), and Bergues a teapot with a wooden handle carved with an African head wearing a slave necklace and silver earrings typical of the region (Du Floo, 1754; €15,000/20,000). It is hard to determine the precise purpose of a bayonet-lid sprinkler by Jean Willems (Dunkerque, 1696) with the arms of Martin de Ratabon, though the finely pierced fleur-de-lys and tulip holes suggest that it was used for powdering wigs more than as a sugar shaker (€12,000/15,000). Pedigree lovers will attempt to land a sugar bowl from Dôle (Étienne-François Renard, 1768-1769) with a rich naturalistic decoration, exhibited at the Musée des Arts Décoratifs in Paris in 1936, having been part of the David-Weill collection sale from May 4-5, 1972 (€15,000/20,000). This magnificent overview of silverware also dwells on Limoges (an early 18th-century olive spoon, engraved with a coat of arms around the hole, by Pierre André Latache; €2,000/3,000), as well as Rouen, Montauban (a six-bell rattle with a mother-of-pearl handle, Bermon, 17th century; €2,000/3,000), Bayonne, Dijon, Toulouse, Strasbourg, Mulhouse, Angers (a patient's feeding bottle attributed to René II Hardy, 1693; €4,000/6,000), Montpellier (olive or caper spoon by Jean I Freboul, 1678; €3,000/4,000) and Brest. Always popular, candlesticks "à la financière" or "à la cardinal", in use from 1660-1680, were named after a certain Mazarin, who owned several of them. These had a square stem holding bundles of candles, under which a push system enabled them to be used to the maximum. With an estimate of €25,000/35,000, this pair (1687) by Antoine I Neyrat of Clermont, is certainly worth the candle. Classic but rare, a set of four emblazoned powder or ointment boxes by Michel-Eloy le Tailleur (Rennes, 1750-1753) looks set to win the highest bid at an estimated €80,000/100,000. Associated with beauty more than cleanliness, washing was a privilege of high society and took place in the bedroom—regarded as a reception room rather than as a private space. Brushes, combs, boxes, mirrors, gloves, bottles, sponges, beakers and so on were all used in the ceremony, and Parisian toiletry sets were even offered as diplomatic gifts under Louis XIV.

While the stars of this sale are the pieces, of course, the way they are set off in the catalog, and their sometimes substantial but totally warranted estimates, are admirable. A real joy!

Pierre Rosenberg the Collector
Not to be missed
Pre-sale