The vagaries of history enabled the bank to build up a remarkable collection of art works, presented in the reception rooms of the Hôtel de Toulouse in Paris, in museums and at exhibitions. 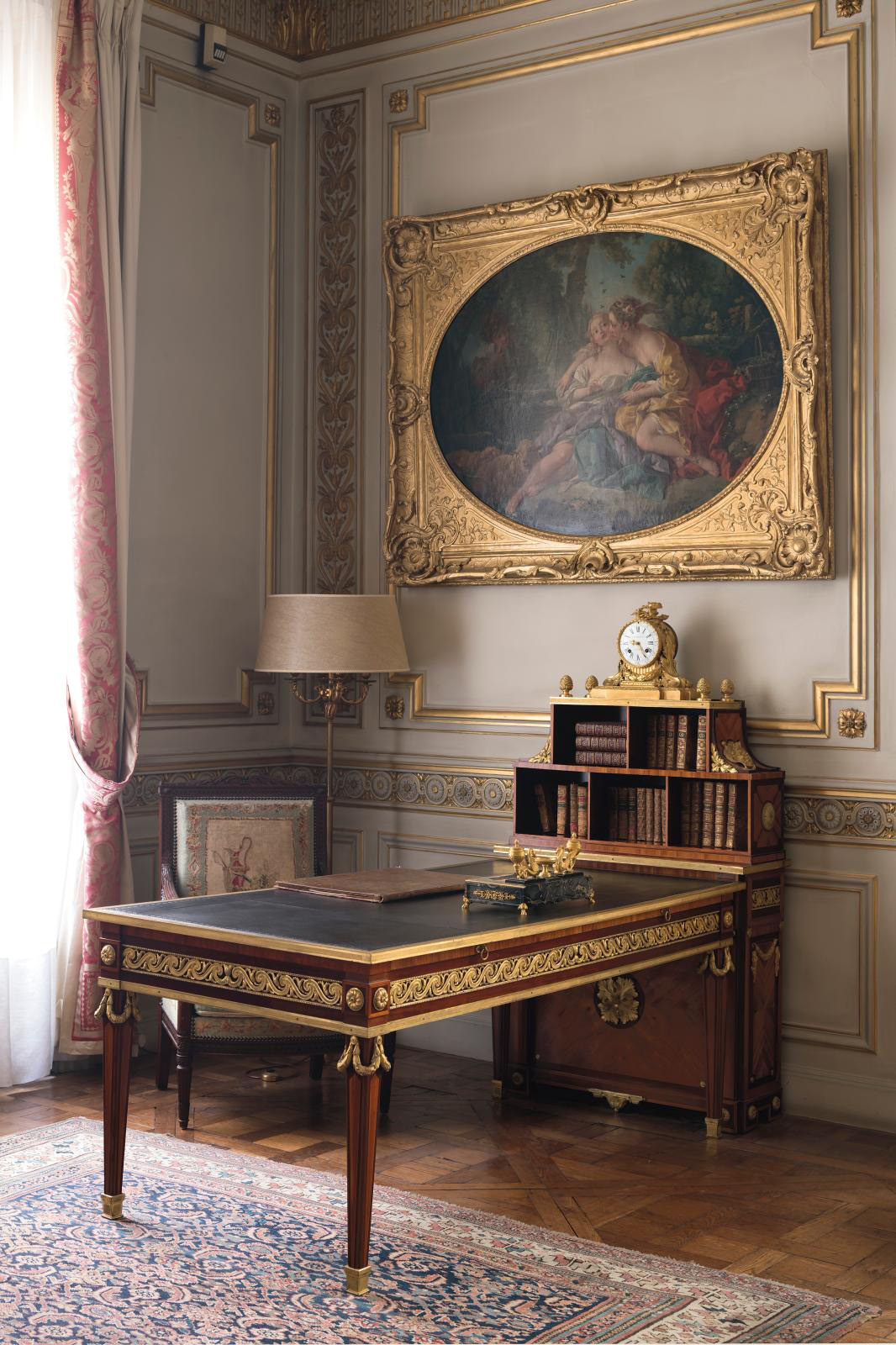 "What! How can you walk on these Savonnerie carpets!" It needed this indignant exclamation from Bernadette Chirac, visiting the Banque de France when her husband, Jacques Chirac, was President of the French Republic, for the two large pieces commissioned by Louis XIV for the Galerie du Bord de l'Eau in the Louvre to be smartly rolled up, removed from the Golden Gallery and put away at last. But with or without its pieces from the Manufacture de la Savonnerie, the gallery is a tribute to French art, with all its mythological paintings and gilt woodwork. It is the jewel in the crown of the Banque de France in Paris's first arrondissement, which is housed in the Hôtel de Toulouse, built in the 17th century by François Mansart for Louis Phélypeaux de La Vrillière, Secretary of State to Louis XIII. During European Heritage Days, 16,000 visitors explore this noble residence near the Palais-Royal, and stroll through reception rooms brimming with paintings, exquisite furniture, large items of silverware and chandeliers with cascades of crystal pendants.

Here and there can be seen a gilt bronze wall clock artistically carved in the rocaille style, a large antique-form serpentine vase, an extensive breakfast service in vermeil, sophisticated clocks and consoles with marble tops or standing on giltwood lion's paw legs. The objets d’art often have prestigious origins: one mahogany antique chest of drawers was commissioned by Caroline Murat to decorate the Parade Room of the Élysée Palace; one bronze lion has a twin in the Château de Fontainebleau; one porcelain dinner set was made by the Sèvres factory for Chateaubriand when he was ambassador in Rome. They were produced by leading creative craftsmen, watchmakers, bronze-makers and cabinetmakers, including André Charles Boulle, Jean-Henri Riesener, François Honoré Jacob (Jacob-Desmalter), Roger Vandercruse and Philippe Claude Montigny. "Walking among these works is like visiting a magnificent museum of the decorative arts," says expert Alexandre Pradère. Except that the Hôtel de Toulouse is not a museum, but a venue where receptions are held—and the sight of the governor's guests sitting on the Duc de Penthièvre's leather stools gives one goosebumps...

Loans to Museums
Another major heritage treasure: the four wool, silk and gold tapestries of the "Marine Triumphs" series produced in around 1697 and designed by Jean Berain, the king's ornamentist. Bought at the François Coty sale in 1936, these exquisitely-colored hangings illustrate, before their time, the spirit of current acquisitions, which are made ratione loci, ratione personae, i.e. reflecting the place or the person. Here the protagonists of this fairytale underwater grotto are none other than Madame de Montespan (as Venus), who commissioned the work, and her son Louis Alexandre de Bourbon, Comte de Toulouse (as Aeneas). In 1713, this legitimized bastard of Louis XIV bought the Hôtel de La Vrillière, gave it his name, and had it redecorated by Robert de Cotte. "What is so delightful is that the motifs of the "Marine Triumphs" wall hangings served as models for the carved woodwork of the Golden Gallery, where a profusion of seashells, anchors and crustaceans evoke the Comte de Toulouse's position as Admiral of France," says Arnaud Manas. The tapestries were hung at the entrance of the Golden Gallery, as were the barometer and thermometer in marquetry and gilt bronze made by André Charles Boulle in 1720. These were purchased in the early 2000s for €12 M and are now displayed in the dining room.

"We don't open the venue to the public, but we do lend a lot," says Arnaud Manas. "For example, one of the famous Savonnerie carpets now hangs in a period room in the Louvre, while the other is dramatically displayed in the Hôtel de la Marine in Place de la Concorde." Other major deposits include the bedroom of the Duke of Gaëte, governor of the Banque de France between 1820 and 1834, which is now set up in the Emperor's apartment at the Château de Rambouillet; a silver oille tureen designed by Charles Percier is on show at the Château de Fontainebleau; Philippe de Champaigne's portrait of Louis XIII is now in the Grenoble Museum, and Élisabeth Vigée Le Brun's portrait of Marie-Adélaïde de Bourbon-Penthièvre, Duchesse d'Orleans, went to the Roger-Quilliot Museum of Art in Clermont-Ferrand just after it was bought in 2015.

A Ready Purse
The Banque de France also regularly opens its wallet to help major cultural institutions acquire works of major interest or prevent them from leaving the country, sometimes at the more or less discreet behest of the Élysée or Matignon. This was the case when a Rembrandt was bought for €80 million in 2015: a purchase strongly criticized by the Cour des Comptes. Encouraged by a highly advantageous tax provision introduced in 2002, this sponsorship is now strictly regulated. Although the institution prefers to lend rather than keep works in its reserves, these are far from empty. La Fête à Saint-Cloud is rarely exhibited: the painting is fragile, and is part of the house. The numismatic collection, one of the richest in the world, rarely leaves the vault. A famous exception is being made for seven fine gold medallions once belonging to the Emperor's collection, soon to be exhibited at La Villette on top of a heap of 2,021 Napoleons! This is one of the most valuable treasures of the Banque de France, which will be installed in an armored showcase with sophisticated mechanisms worthy of Indiana Jones.