D as in Damascene

This technique of decorating metal with inlaid copper, gold or silver reached its height in the East before catching on in Europe. Damascene is still a mark of luxury today. 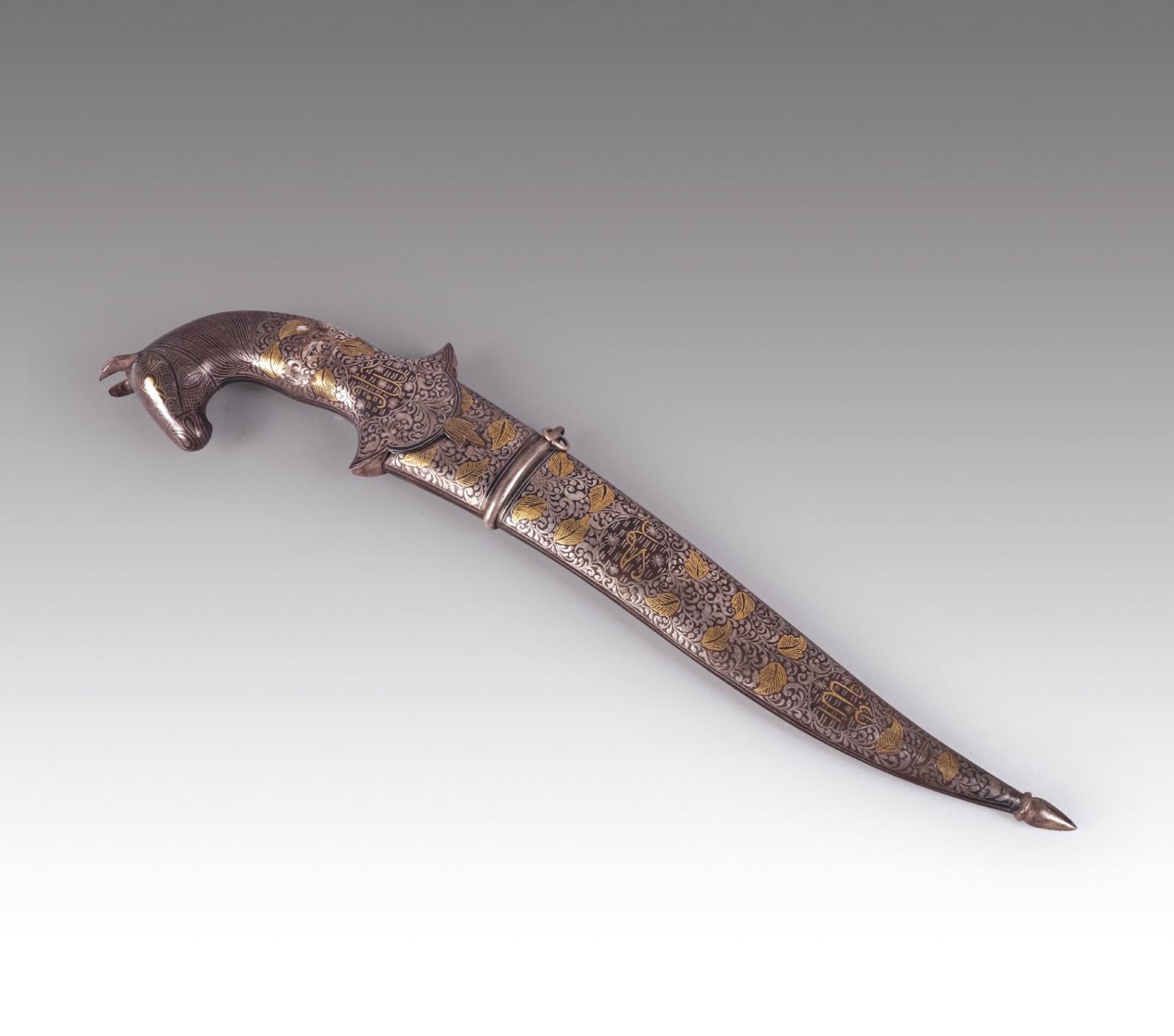 Ancient Egypt already mastered damascening and used it on bronze. Then the technique traveled around the Mediterranean rim and was used on elegant Mycenaean swords. Gradually gold or silver was also inlaid into iron or steel. Asia followed suit, especially China, where damascening was practiced during the Warring States period (5th-3rd century BCE). The Middle East excelled at the technique, which was perfected in Damascus, hence its name: damascine, also called "damasquinure" or "damasquinage".
Various damascening methods still exist. Two are based on Eastern traditions. The third method copies it with minimal effort. In the first two, copper, gold or silver is inlaid into a metal surface. First, a design is incised into the surface metal. Then the precious metal is gently hammered into these narrow grooves, crimping their edges so that it is permanently fixed. The second technique is superficial and less sturdy. The craftsman deeply hatches the metal surface before quickly engraving it with the motifs and then directly hammers the gold or silver with a burin, shaping them with his finger. The décor is consolidated by a quick firing and polished with agate so that the motifs adhere properly to the grooved surface. This technique was developed in the East and introduced to Venice in the 15th century. Both methods have one necessary condition: the precious metal must be softer than the metal into which it is inlaid. That is why it is always preferable to inlay precious metals into bronze, iron or steel.
The third process, also called “false damascening”, is based on amalgamation and not inlay. It was used particularly in Europe from the early 16th to the late 17th century. The application of heat causes the gold or silver to amalgamate with the metal surface. The craftsman would previously cover the whole surface with thin scratches to avoid ruining the decoration and ensure better adhesion of the precious metals. This process makes it possible to tell the difference between false damascening and traditional techniques. In any case, oxidation of the surface metals ruins damascened motifs and repeated rubbing damages the décor of false damascene.
Damascened objects circulated in Europe well before Venetian and Milanese craftsmen learned Eastern techniques. The Merovingians (476–750 CE) mastered this art, which is found in small objects such as belt buckles, spurs, sword hilts and fibulae. Muslim craftsmen who settled in Toledo after the Arab conquest soon taught their Spanish counterparts the art of damascene. The damascened doors of the Basilica of Saint Peter Outside the Walls were made in Byzantium in 1070. Artists and goods traveled easily between 14th- and 15th-century Venice, Damascus and Alexandria. Italian courts loved damascene, influencing the neighboring French. In the 16th century, renowned craftsmen such as the Negroli brothers in Milan and Paolo “Azzimino” in Venice damascened arms, armor and small luxury items. The Lombards applied fine filiform and floral inlays, while the Romans were more exuberant and used lavish arabesque, animal and foliage motifs.
In France, King Francis I welcomed Benvenuto Cellini (1500-1571) to the royal court. Cellini wrote in his Memoirs, with his well-known modesty, that he surpassed the Eastern works in beauty and technique. A mace of Henry II was later decorated by the Spaniard Diego de Çaias, and the guild of metal gilders was created in 1565. In the 17th century, the furbisher Cursinet became famous for his craftsmanship. In the 19th century, Spain maintained damascening at its highest level thanks to Eusebio Zuloaga (1808-1898), who was responsible for reviving this craft, which had been somewhat neglected in the 18th-century. He founded a talented dynasty of artists whose luxurious products were greatly admired in England. In Japan, Fujii Yoshitoyo (1868-?) was among the most noteworthy creators of damascened objects, including superb cigarette cases. Damascening came to Japan by way of the Silk Road. Like everywhere else, it was used on swords, armor and firearms. The technical proximity of armor-making, locksmithing and clockmaking led metalworkers to embrace this ancient art. The creators of contemporary watches still use this delicate luxury technique.

Something to see:
The armor of the dauphin, the future Henry II.
Made by Francesco Negroli and his brothers, ca. 1540, Milan.
Blackened iron inlaid with silver, embossed and gilded.
Musée de l’Armée, Paris.

S as in Sulphide
Newsfeed
See all news
3 Generations of Wyeth Painters on View at Farnsworth
Italian Museums Help Vaccination Campaign
Wildfire Burns Down Cape Town University’s Historic Campus Library
Leonora Carrington’s Mexico Home and Studio to Open to the Public
Not to be missed
Glossary
B for Berain
Trained as an engraver, Jean Berain explored the freedom of an art…
Glossary
C for Crystal
Lead crystal crowned centuries of research and experimentation.…
Glossary
L for Lace
Lace is an intricate, openwork fabric without weft or warp featuring…
Glossary
G for Glass
In the early 17 th century, competition to equal or even surpass…