Their reserve barely conceals an ambition honed at elite schools. At 25 and 27, the grandsons of Dina Vierny, the post-war gallery owner and Maillol's muse, are taking over the Left Bank’s oldest gallery. 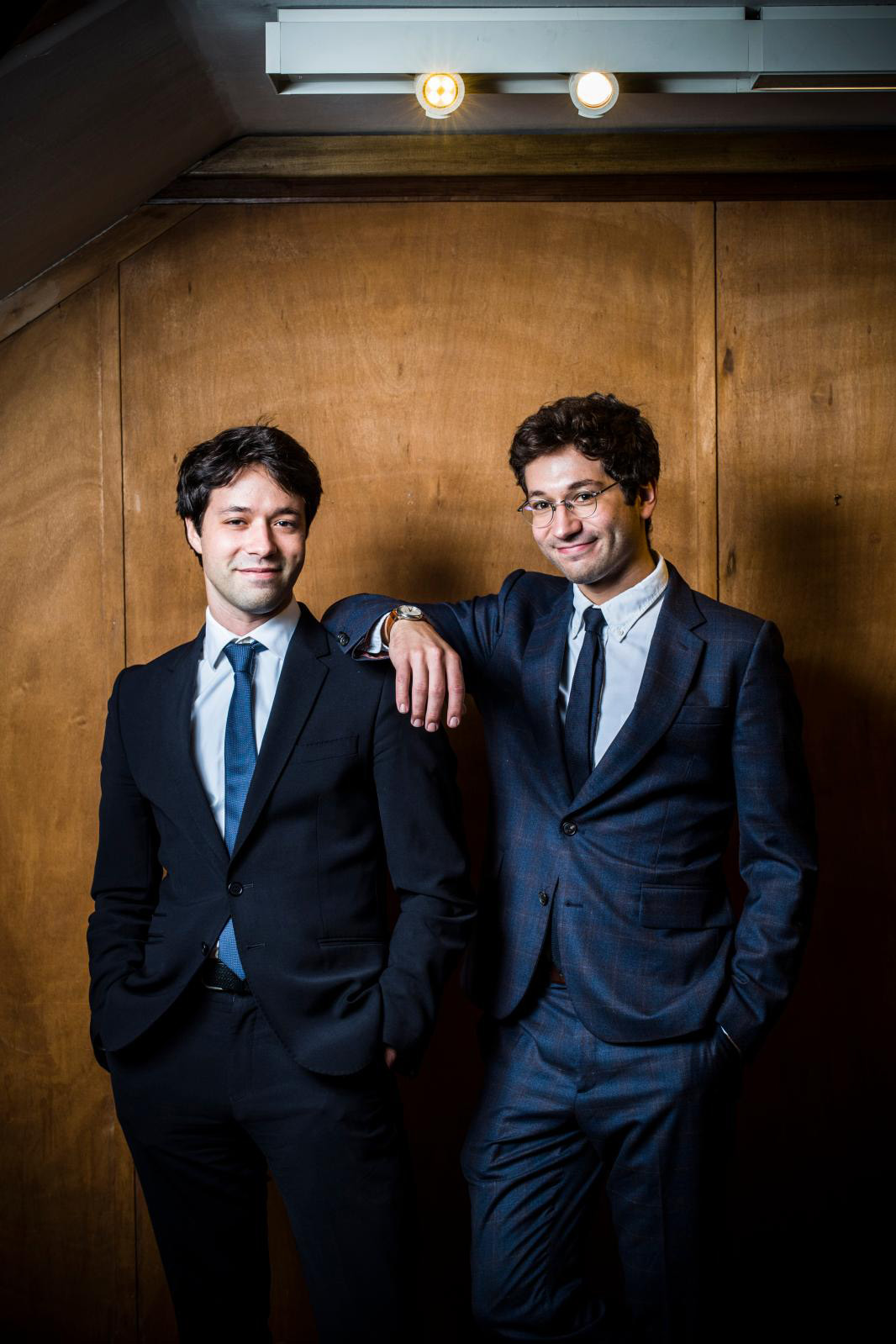 What do you remember about your grandmother, Dina Vierny?
Alexandre Lorquin. We were very close. Our grandmother enjoyed sharing her passion for objects with us. She gave me a little anthropomorphic dog from her collection of dolls and automatons, certainly one of the biggest in the world, which I had to sell to fund the Maillol Museum (editor’s note: founded by Dina Vierny in Paris in 1995). After showing me how it worked, she put it away in a locked room. That gives you some idea of the visceral relationship she had with objects. She possessed over 80 collections: mustard jars, canes, keys and, of course, paintings. They stretched from the floor to the ceiling!

Did you inherit her “collectionitis”, which your father also has?
A. L. We started collecting very young. Today we buy modern and contemporary art together: Aristide Maillol, Edgar Sarin, Nuvolo—a still little-known Italian artist whose beautiful 1955 painting we recently bought at Drouot—20th-century furniture and Épinal prints. The same eclecticism is still going strong.

Your father, Olivier Lorquin, has been running the gallery since the 1980s. Why is he passing the torch now?
Pierre Lorquin. It almost went without saying. After obtaining my business degree, I started the Prisme Gallery with a friend, Thomas Benhamou. Meanwhile, Alexandre was getting ready to start an internship at Di Donna in New York. When our father asked us to take over, we jumped at the chance. Everything picked up speed during the lockdown, a period when we got a lot done. We had to define the program, hire a new team and restore our historic space on rue Jacob. We turned the first floor, where our grandmother lived, into a reception room with a very low-ceilinged mezzanine floor, typical of Left-Bank Parisian architecture. We also did our best to restore the gallery’s original aesthetics designed by architect Auguste Perret, from the lighting to the plant fiber floor. At the same time, we opened up a contemporary art gallery: Pal Project.

What changes do you want to make?
P. L. The idea is to refocus on the gallery’s roots, from Impressionism to the post-war period, which we’d strayed from a bit. Our father included photographers such as Frank Horvat. We decided to stop working with them and to gradually bring in new artists while keeping the original spirit. We also had to modernize, which meant digitizing our inventory and redesigning our website.
A. L. At the moment, we’re focusing on Hungarian painter Judit Reigl [editor’s note: died in 2020 at 97], who no longer had a gallery representing her, although her work can be found at Berès and Laurentin. Our goal is to create a solid ecosystem around her work by building up stock, forging partnerships abroad and publishing catalogs. Our main aim is to offer museum-quality exhibitions, not just hangings.

You form a business/art duo. Is such pragmatism necessarily a requirement nowadays?
A. L. I did everything I could to become an art dealer. At 15, I was already the youngest unregistered student in the classes at the École du Louvre! This dual role allows us to see things a bit differently, even if others do without it very well. For example, Pal Project has a well-thought-out business model. The aim is to make it an incubator for the Dina Vierny Gallery’s future contemporary branch. We took inspiration from the Castelli Warehouse, a space where artists are free to experiment. Some of them, like Eva Hess and Richard Serra, later joined the Leo Castelli Gallery. We also try to have slightly offbeat, less institutional communication. At the opening of Pal Project, Joe Biden could be seen reading Pal Mag, the exhibition’s magazine. In collaboration with two curators from Wonder, an artist-run space in Clichy (near Paris), on June 12 we’ll sell works ground into dust for €100 per one-gram bag. We navigate between two worlds in which we feel equally at ease.

With the exception of Art Paris in 2018, you’ve kept a very low profile at fairs in the past fifteen years. Are you tempted by Ex.Paris?
P. L. The slowdown in our activity is due to the fact that the Maillol Museum required a considerable amount of energy. Our grandmother participated in the first editions of Art Basel. We want to get back in the race by selecting the most appropriate fairs. We’re thinking about Frieze Masters, where we could present an artist worth "rediscovering", such as Robert Couturier, the Salon du Dessin, the BRAFA. And why not do something again with the FIAC or participate in Ex.Paris if we find the first editions convincing?

Some of your artists, like Rimbert and Vivin, are barely known in the market.
A. L. You’re referring to the "modern primitives", who were lumped together under that name by art dealer Wilhelm Uhde, who held the first Douanier Rousseau exhibition. Our grandmother carried on that legacy by representing these artists on a continuous basis. It may not be the most sought-after aesthetic today, but I think that with the right promotional work things can change. Take Séraphine, for example. Her value has soared in ten years. A very beautiful work of hers now fetches several hundred thousand euros; same thing for Camille Bombois.

Speaking of Séraphine, her first solo show just opened at the gallery.
A.L. We’re taking advantage of the publication of Pierre Guénégan’s catalogue raisonné, which lists 114 works—a very limited output. We’re exhibiting one-sixth of that oeuvre, a beautiful group from the gallery’s collection and from private collectors. Three works are for sale, which is rare, as most of the pieces are in immovable collections or museums, and many have been lost. Séraphine’s greatest period was from 1927 to 1930, before Uhde stopped backing her and she went mad. She drew a wider following than naive artists did.

It’s said that Poliakoff didn’t sell a single work during his 1951 show at the gallery. What about now?
A. L. Poliakoff lacks a little something to reach the same level of fame as artists like Pierre Soulages. I thoroughly agree with what collector and art dealer Daniel Cordier said about the failure of French artists to achieve success in the United States. The reason, he said, besides shipping costs, is that Americans like large formats imbued with a certain brutality and find French art too delicate. Collectors across the Atlantic are unfamiliar with Poliakoff and find it hard to understand why an artist deemed "important" in Europe should be priced so low. We’re planning a show called "Poliakoff and Monochrome" that will feature his bold, contemporary experiments based on Klein and Reinhardt’s work. We think the recognition of our artists also depends on modernizing the gaze.

Do you intend to develop your relations abroad?
P. L. Absolutely! For now, our clientele is mainly French, except for a few major international Maillol collectors. For example, we’re working on a show devoted to Dina Vierny at Marianne Rosenberg’s in New York, art dealer Paul Rosenberg’s granddaughter. There’s still plenty to do in this area.

The Dina Vierny gallery
in 5 dates

1947
On advice from Matisse and Jeanne Bucher, Dina Vierny opens a gallery on rue Jacob.
1995
Dina Vierny, Maillol’s universal legatee since 1972, creates the namesake museum in Paris.
2002
Last participation in the FIAC.
2013
Eleven pieces by Maillol, including La Rivière (The River), are auctioned to settle Dina Vierny’s estate taxes.
2021
Alexandre and Pierre Lorquin take over the gallery and the vice-presidency of the Dina-Vierny-Maillol Museum Foundation

Mariane Ibrahim Champions Contemporary African Art In Paris
Newsfeed
See all news
Conceptual Artist Laurence Weiner Has Died, Aged 79
Controversial Hirshhorn Museum Modernist Sculpture Garden Approved
Deutsche Bank Names Lu Yang “Artist of the Year”
According to New Research, Top 10% of NFT Traders Perform 80% of All Transactions
Not to be missed
Interviews
Quentin Bajac: From MoMA to the Jeu de Paume,…
Two and a half years after taking up his post at the Jeu de Paume,…
Interviews
Amin Jaffer: Curator of the Al Thani Collecti…
The delights of the fabulous collection of Sheikh Hamad Bin Abdullah…
Interviews
Françoise Gilot, Life Story of an Artist and a…
On the eve of her 100th birthday, Paloma and Claude Picasso’s mother…
Interviews
Caroline Jollès, Patron of Design
In 2011, Caroline Jollès, who is very involved with the Quai Branly…