Austrian gallerist Thaddaeus Ropac is one of the highest-profile figures on the international contemporary scene. He took a break from preparing the Miquel Barcelo and Richard Longo exhibition at Paris+ to speak to us about today’s art, his role and his aspirations. 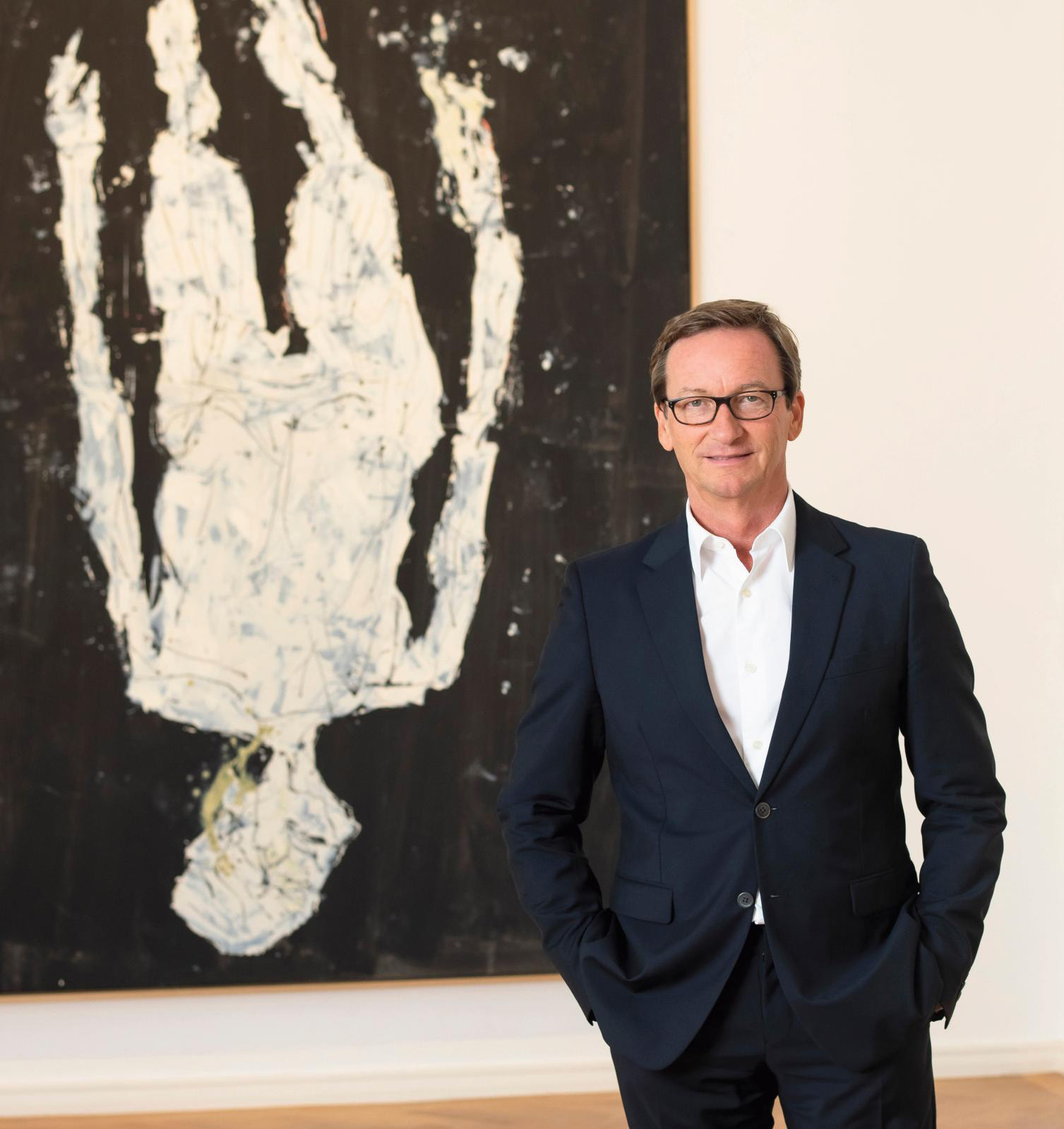 If we consider the evolution of art, at what stage would you say it is today?
Once, art was in an ivory tower, where small groups of people, a certain intellectual elite that had access to it, met, enjoyed it and discussed it among themselves. This very elite is what defined it. But today art is at the center while becoming more affordable. Very early on, in 1982, I was lucky to train with German artist Joseph Beuys, who thought that everyone’s an artist. He tried to break the exclusive mold of artistic creation and make it more inclusive. But it took another thirty years or so for women to break through. Today, anyone who wants to participate has the opportunity to do so. Art has moved away from its elitist nature and embraces all of society. Contemporary artists question our times, our feelings and the human condition. Galleries are also trying to break down certain boundaries, leave closed spaces and get as close to society as possible. So are artists, who want to have direct contact with the public, not just collectors, critics and experts who are in the first circle. That’s why I think the period art is going through now is particularly important.

Does art have the power to change us?
It can, for people who are already open to change. Art is more important now than ever, but it still addresses cultured people who want to see an exhibition, read a book or listen to music for reasons other than entertainment. They consider art a source of reflection that can have an influence on our lives and societies. This audience is growing, but I think it’s won over in advance. We all love art. We can’t live without it. Art moves us deeply. It’s changed our life because it not only gives answers but asks the right questions. One might wish for a greater impact, but over the past 40 years I’ve seen things change. When I talk to young people today, I get the feeling that they want to live with art, especially with the art of our time. When I was a child in Austria, we had the feeling that art had stopped with Klimt, Kokoschka and Schiele. But it's good to see that the younger generation knows contemporary artists. They’re familiar with their work and want to find out more about them. So things have changed a lot, but art’s impact and influence on society is still limited.

Yet countries often use it as a form of soft power.
That’s been going on for centuries. When King Charles I of England visited the Habsburg court in Vienna, he realized what incredible artists they had there compared to England. So he invited Van Dyck and others to London to help him create a collection, among other things. He became really knowledgeable about the art of his time. When war broke out between England and Spain, who do you think the Spanish asked to start negotiating with the English? Rubens! Knowing Charles’s interest in art, when it came to choosing a peacemaker they didn’t send an ambassador or the equivalent of a foreign minister. They chose Rubens. And he agreed!

There are even more recent examples.
Yes. In the 1950s, the Americans, who had understood the political power of art, wanted to introduce their best artists to East and West Germany. They started by sponsoring exhibitions of Mark Rothko and Barnett Newman, who were among the biggest names at the time. They didn’t look back to the 19th century. They opted for the great American art of the 20th century. Once when I was talking with Georg Baselitz, he told me that that was just what changed his life as an artist. As a young student, he’d go to the museums in Berlin to see American art. At the time, nobody knew the shows were sponsored by the United States government. The CIA, no less! Not even the German cultural affairs officials realized that the Americans were using art as soft power. They just told themselves, “America is a free country, the art is free, everyone can do whatever they want there, and here’s the proof.” That inspired the new generation of German artists who were just coming out of the Second World War and the Holocaust. The Americans knew exactly what they were doing: they used their artists to show the world that the United States was the land of the free.

Want to receive news and updates about auctions?
Sign up for our newsletter
Does the news inspire contemporary artists?
They don’t react to the moment. Artists don’t comment on what’s happening at a specific place or time. They’re more utopian. They aim to create a different world, to give us thought-provoking ideas, not something that’s part of everyday life. Artists can see things from a different angle than we do. Their works transcend the news and tend to say where we’ve come from and where we might be heading. It’s not necessarily a matter of creating an ideal world, but a different one. Artists have always wanted to be more influential. But looking at art history, you can see that operas that were composed against war didn’t prevent them. They just commented on them at a very sophisticated level that, again, addressed an elite. Perhaps we can expect a greater impact now that artists have come down from their Olympus, but that remains to be seen. That said, art is always political because the human condition, which it questions, is political, like racism, feminism or gender. Perhaps art has less political impact than we would’ve liked, but I think that’s changing. And I think we’re living in art’s most exciting period because it’s really part of life. It aspires to change society and address issues of democracy and human rights. There’s still a long way to go, but I think we’re on the right track.

Art Paris Is First In Line
Not to be missed
Interviews