A Caravaggesque Christ by Simon Vouet

Perhaps the more appealing of the two drawings from the Marquis of Lagoy's collection up for sale is not Rubens' project for a vignette for Franciscus Aguilon’s Opticorum Libri Sex, but this work by Simon Vouet. 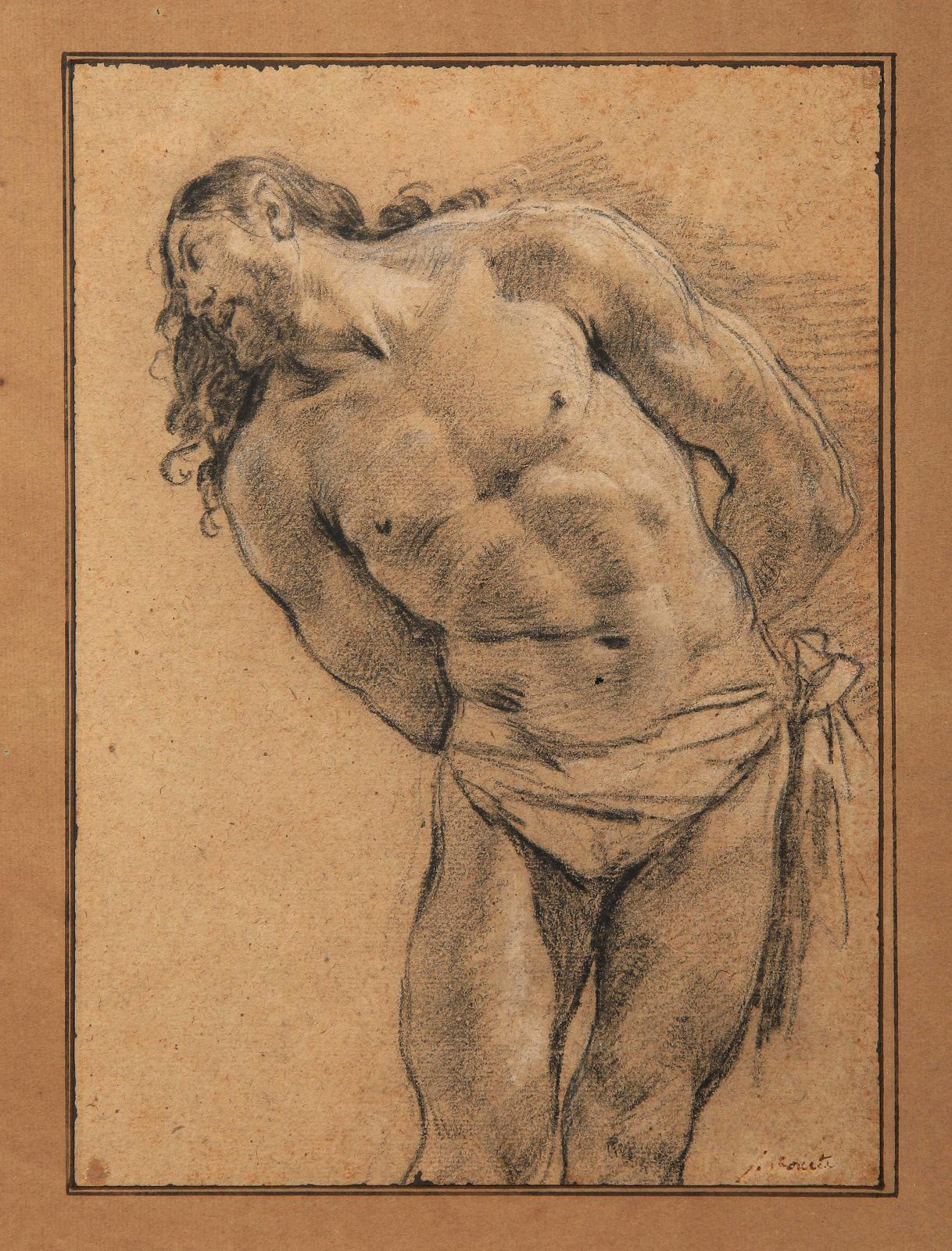 On the face of it, toiling relentlessly to honor royal commissions, the First Painter to Louis XIII and the Cardinal Richelieu epitomized French art in the first third of the 17th century. But Simon Vouet had a many-faceted life before giving birth to classicism, and training many famous figures of the Grand Siècle like Charles Le Brun, Eustache Le Sueur, Michel Dorigny and Michel Corneille the Elder. On the other side of the coin, he always remained the young man thirsting for discovery, who had traveled to London, Constantinople and Venice and lived 15 years in Rome, where he married—and painted—one of the Baroque city’s most sensuous models, the artist Virginia Vezzi. Ten years after leaving Italy, his work still bore the mark of Caravaggism.

Power and Fragility
The drawing discovered by De Bayser shows a Vouet who had assimilated Caravaggio’s vocabulary, which he transcribed in black chalk. The connections with the master’s Flagellation in San Domenico Maggiore are clear, and even more so with his Christ at the Column at the Musée des Beaux-arts in Rouen, which came from Cardinal Scipio Carafelli Borghese’s collections. We see the same power and fragility—but a less muscular aspect— in the model, who looks both rough and noble, in Étude pour un Christ sur la croix (Study for Christ on the Cross, Berlin, Kupferstichkabinett): a preparatory drawing for The Crucifixion now in the Musée des Beaux-arts de Lyon, which Vouet painted for the chapel of the Hôtel Séguier in 1636.
This new Caravaggesque Christ is a little gem, vibrant its skillful mixture of black and white chalk—an expression of the artist’s speed—and the treatment of the subject. The pentimento on the left arm plays a part, but a host of other, no less interesting details also breathe life into the twisted body, such as the thickness of the lines on the abdomen, the emphasis on the crotch, which heightens the impression of the model’s uneasiness—and, especially, the light caressing the left shoulder, chest and hip.

One Painting; Several Attributions
This drawing making its debut at auction also reignites a debate over the division of tasks in the studio of Vouet, who would give his students preparatory drawings for them to execute several of his commissions. A pen and brown ink annotation in the lower right-hand corner reads “S. Vouete”, but on the back the Marquis of Lagoy wrote: “Étude du Christ à la Colonne du Tableau de Le Sueur, qui est au musée de Versailles/Eustache le Sueur” (“Study of Christ at the Column for the painting by Le Sueur in the Versailles Museum/Eustache le Sueur"). As with Homme liant une poignée de verges (Man Tying a Bundle of Rods) in the Musée des Beaux-arts et d’Archéologie in Besançon, which also bears Le Sueur’s name, he made a preparatory drawing for Christ à la colonne, one of Louis XIV’s paintings, on which art historians are still far from reaching a consensus. The work mentioned as Vouet’s in the inventory of the king’s paintings, which Dézallier d’Argenville later attributed to Le Sueur, was deemed a Vouet by William Crelly in his 1962 monograph. Alain Mérot accredited it to Le Sueur in his 1987 catalog, while Barbara Brejon de Lavergnée “definitely favored Vouet” in her catalog for the major Vouet retrospective in 1990-1991. However, Arnauld Brejon de Lavergnée ascribed it to Le Sueur in 1998.

Since then, the lines have shifted. Bénédicte Gady takes issue with Lorenzo Pericolo’s attribution to the young Le Brun in his 2001 Revue du Louvre article “À propos de l’auteur du Christ à la colonne du Louvre: Vouet, Le Sueur ou Le Brun?” (“The Louvre’s Christ at the Column: by Vouet, Le Sueur or Le Brun?”), but Dominique Jacquot and Guillaume Kazerouni share his opinion in the catalog of the 2005 exhibition “Lot and His Daughters by Vouet”. Both point out the same “wildness of the whole” and “reddish skin tones and physical types” in the Nancy painting attributed in turn to Vouet, “Charles-François Poerson?” or “Michel Corneille”, which they ascribe to Le Brun. Odds are that the Louvre work will not be in Dominique Jacquot’s catalogue raisonné of Vouet’s paintings to be published by Cohen & Cohen in a few months, but perhaps it will appear in the one Barbara and Arnauld Brejon de Lavergnée are preparing in collaboration with Alain Mérot.

This lively drawing, coming up for sale at Drouot on March 26, boasts a dramatic character and a sensitive eloquence that are "immediately striking". Whatever the attribution, date and purpose, it is certainly a French 17th-century masterpiece. The sale of these studies, which have remained in the Château de Lagoy until now, offers consolation for the postponement of the Salon du Dessin to June, allowing March, despite the circumstances, to remain "Drawing Month". The dispersal of the collection, which survived the vicissitudes of the Revolution, Woodburn’s acquisition of part of the collection, including 17 Raphaels, and, above all the sale of the estate in 1834, makes us wonder about the 3,000-odd drawings once owned by Lagoy.