Fascinating artefacts from the Marchesas Islands

Essentially sacred artefacts, a pair of stirrups enabled combatants on stilts to fight each other in honour of the gods and the departed. In Louviers, they look set to win a further victory very soon, given their age and rarity. 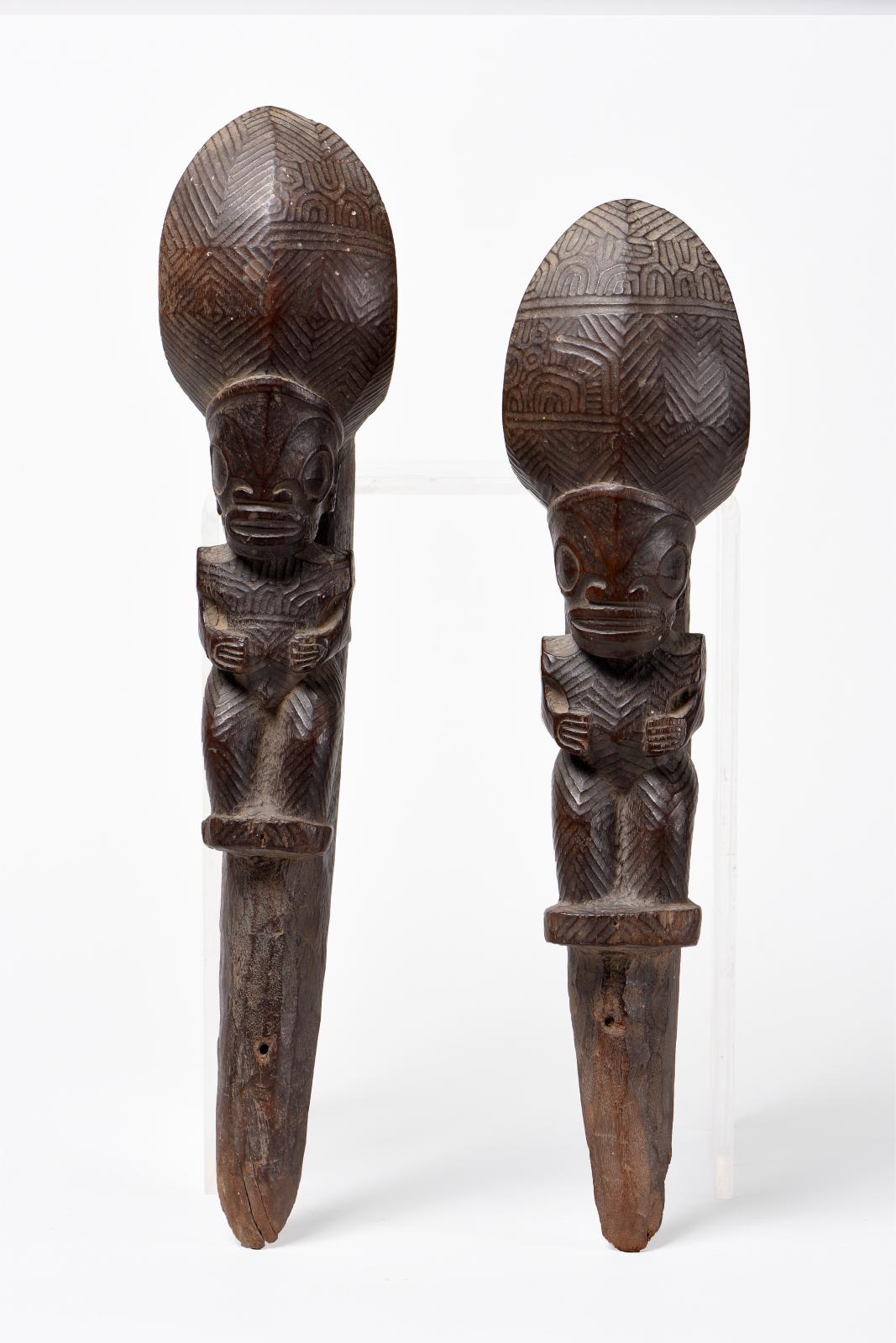 In Polynesian cosmogony, the half-divine, half-human tiki played a key role as the first man who engendered all the others. That is why his mythical figure is a recurring theme in all the land areas in this huge region in the world. Here he takes centre stage on two tapuvae or stilt stirrups: the artist has depicted him standing, with legs bent, back arched and hands on his belly. The supernatural being's face has a flat nose and typically large, round eyes. His body and the entire surface of the footrests are covered in geometric decoration, finely carved with a stone tool or sharpened shell. With the passing of time and repeated rubbing due to use, the two sports accessories, each carved from a single piece of hardwood (perhaps toa or "ironwood"), have acquired a glossy patina. These two pieces – a genuine pair, and thus very uncommon – come from the Marchesas Islands. Here, as in many islands of Polynesia, the people used to stage fights on stilts. These consisted of jousts performed during sacred festivals or funeral ceremonies, during which athletes from different villages fought each other in paved public squares called tohua. Fixed onto poles with narrow coconut fibre cords, the tapuvae were guarded carefully by the ruling families the rest of the time.

A collection acquired in Rouen
In 1792, these games on stilts were described for the first time by Captain Étienne Marchand after his long voyage in the South Seas on board the Solide. After what must have been many adventures, these two stirrups finally came into the hands of François Langlois. This cloth manufacturer was remarkable for inventing new dyeing techniques, and in his private life for assembling an amazing cabinet of curiosities at his house in Louviers. He moved there in 1871; later, in one of his drawing rooms, he displayed five pieces of Oceanic art (all up for sale on 14 July) with a chair in whale vertebrae. The collector had just left Rouen at the time, and had probably bought his treasures in the port there between 1860 and 1870. His supplier could well have been one of the many naval officers who regularly brought ethnographic pieces back to Normandy's capital, like Admiral Jean-Baptiste Cécille with his Maori artefacts.

Secrets of objects Secret objects
Louviers - 28, rue Pierre-Mendès-France - 27400
Prunier
Info and sales conditions
Catalogue
Newsfeed
See all news
Due to the summer holidays there will be a pause in the newsfeed. We will be back Monday, August 24th. Have a wonderful summer vacation!
Met Museum in New York acquires Wangechi Mutu sculptures
US House of Representatives vote to create a national museum dedicated to Latin Americans
Church volunteer confesses to starting the Nantes Cathedral fire
Not to be missed
Pre-sale
Figurative art from van Goyen to Combas and the inescapable…
This 1955 work by Bernard Buffet belongs to a series of around 10…
Pre-sale
Henri Lebasque, painting the zest for life
His soft, nuanced palette captures moments of simple happiness on…
Pre-sale
The Gilles Labrosse collection: fashion throughout the…
Amassed by an impassioned enthusiast, one of the largest private…
Pre-sale
Achille Laugé: Cailhau in perspective
Found during an inventory carried out for an estate in the Var,…