Bruegel the Younger’s "Peasants' Meal in the Village"

The Antwerp artist's tenderly ironic depiction of peasants eating in the heart of a meticulously detailed village is one of the most popular paintings in his repertory, both then and now. 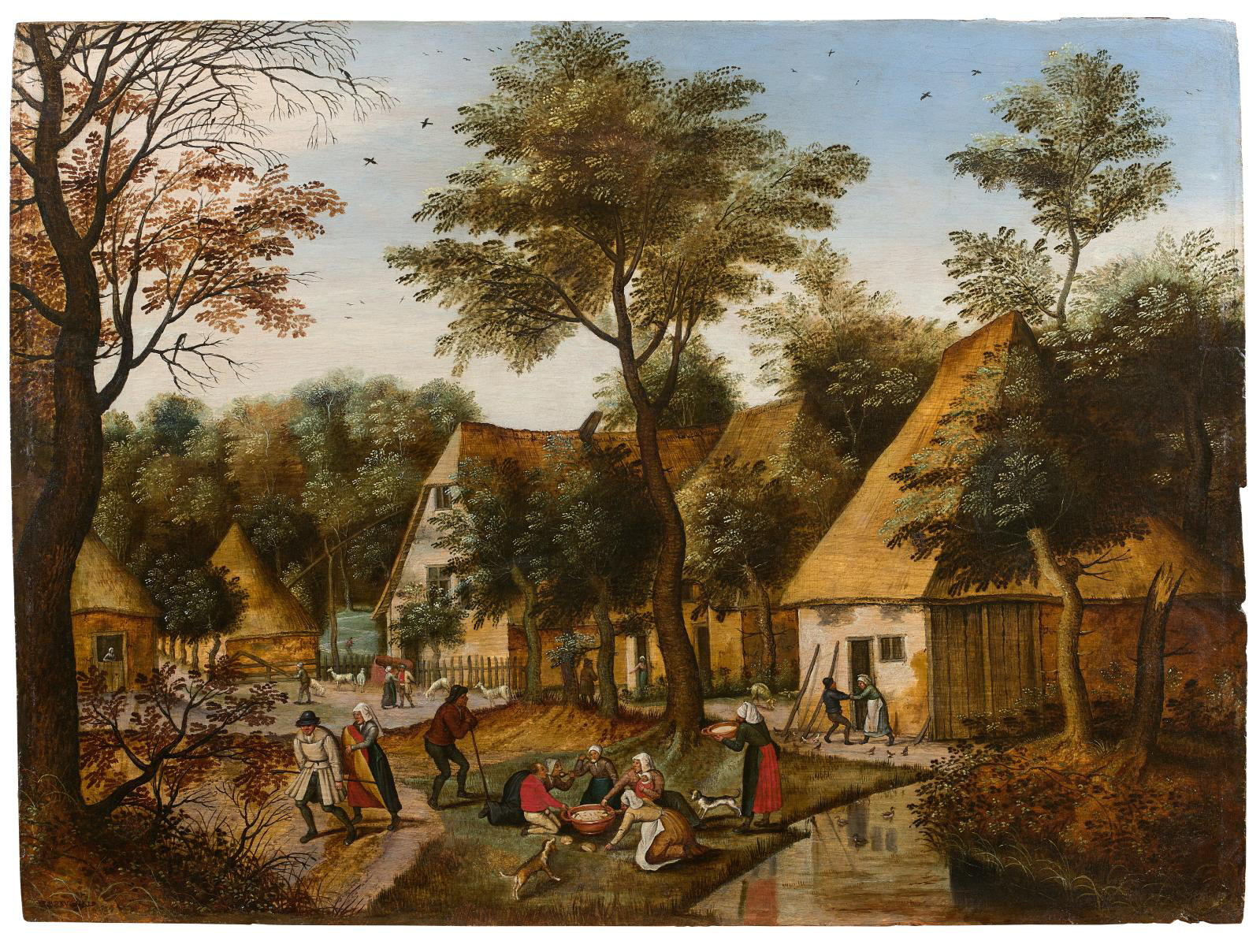 The setting consists of a hamlet of dwellings with earth walls and high thatched roofs reflected in a pond. Villagers are happily eating on the grass, perhaps at an event, or just enjoying the beautiful season. Four women and a man kneel around a large pot and dip their spoons into it, before swallowing their share of this rustic feast. The meticulous, imaginative depiction of the Peasants' Meal in the Village indicates only one hand, confirmed by a very obvious signature: that of Pieter II Bruegel, aka Bruegel the Younger. Son of Bruegel the Elder (1529-1569), the artist is said to have been for many years a brilliant imitator of his father's works, copies of which he occasionally provided. However, when he was admitted as master in Antwerp in 1585, he developed his own personal style: first with his famous theme of fires, which earned him the nickname "Hell Bruegel", and then by working the vein of the Flemish landscape in his own way: some originality already explored by art historian Georges Marlier in his book on the artist, published in 1969 by Robert Finck. In this book, he describes one version of the composition here (now in the National Gallery in Prague), evoking this "enchanting site with its wonderful forest atmosphere: one of the painter's most beautiful inventions." The Belgian critic also noted certain influences, like the "rendering of the foliage, somewhat reminiscent of Joos de Momper". But other debts owed by Bruegel to his contemporaries are also evident: for instance, Gillis Mostaert's influence in the small dancing figures, and Abel Grimmer's in the deeply human and sensitive representation of peasantry. In any event, the subject seems to have been one of Bruegel the Younger's best-sellers, as he repeated it several times from 1625 onwards. So, in addition to this panel (acquired by the family of the current owners in Brussels before 1914) and the work in the Prague museum, we know of other replicas: leading specialist Klaus Ertz, in his monograph devoted to the painter published in 2000, listed three more, while one last version, unsigned but authenticated by Mr. Ertz, was sold on October 21, 2020 by Legia Auction in Brussels.

Print the article
Newsfeed
See all news
In Aubusson, the Cité internationale de la tapisserie Is Thinking Bigger
Tempera Work by Mark Tobey Approaches the Million Euro Mark
Gwangju Biennale Postponed to 2023
Post-War Art in France Kicks Off 2022 at Drouot
Not to be missed
Pre-sale
Jacques-Laurent Agasse and the Challenges of …
Jacques-Laurent Agasse, a brilliant animal painter, was born in…
Pre-sale
A Japanese-Inspired Clock
This particularly decorative clock illustrates the late 19th-century…
Pre-sale
Willem de Kooning, the Rejection of Styles
Unlike abstract expressionist painters, Willem de Kooning never…
Pre-sale
Emile Gallé, the Virtuoso Art Nouveau Gardener…
The thistle was one of Emile Gallé’s favorite themes. That should…