Zephyr, a skeleton of a dinosaur in the Iguanodon genus which was unearthed 70% complete in Colorado, will go up for auction on October 20. 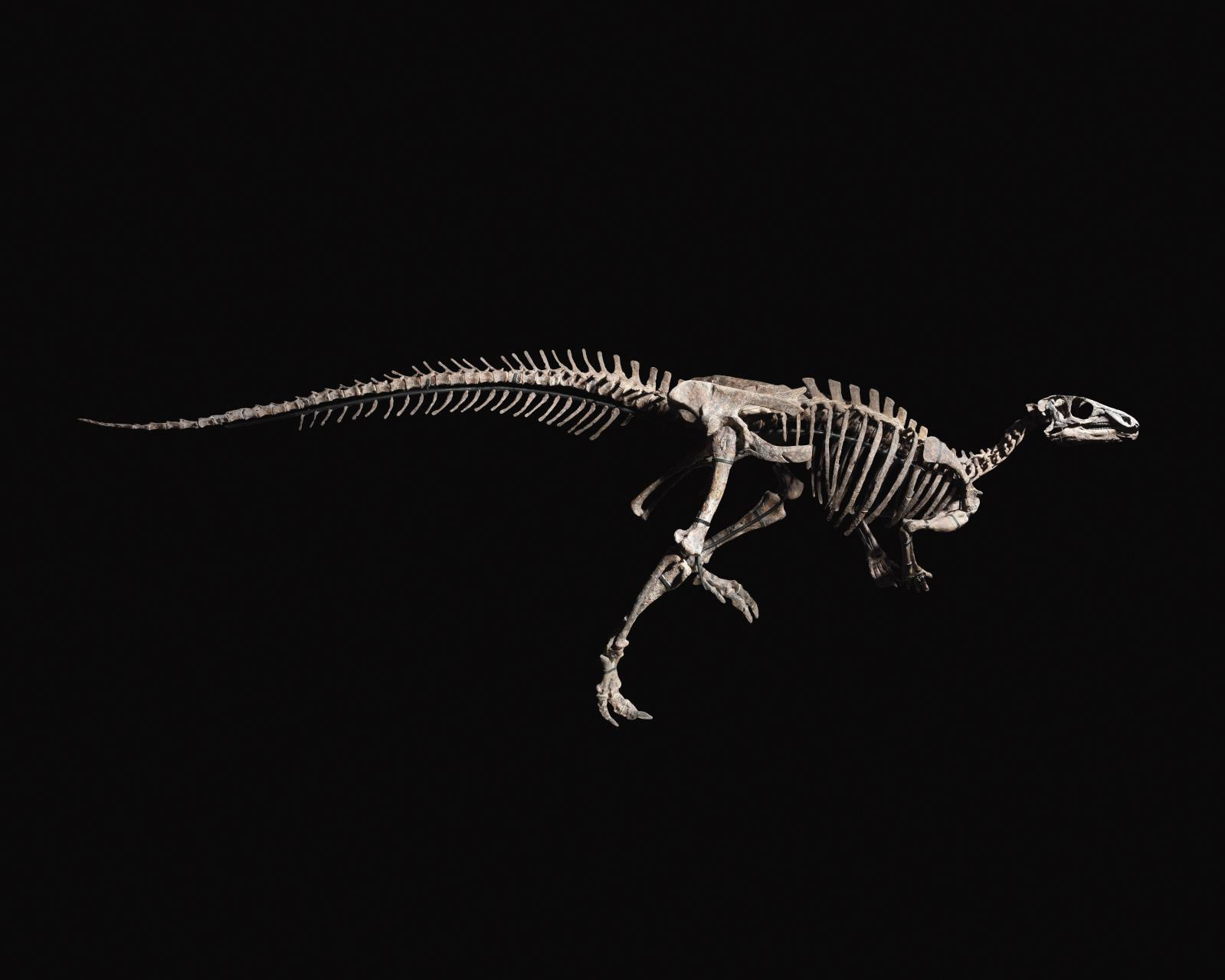 In July, Zephyr stood guard over the king’s bedchamber at Vaux-le-Vicomte Chateau, just outside of Paris, against a backdrop of 18th-century paintings and furniture. From August 6 to September 7, the fossil stole the spotlight at Nouvelles Galeries in Annecy, and from October 5 to 9 it will take up residence at the Xavier Eeckhout Gallery on rue Jacques-Callot in Paris before being dismantled and reassembled like the pieces of a jigsaw puzzle at the Hôtel Drouot. After Stan the T. Rex, Big Sara the allosaurus and Big John the triceratops, here’s Zephyr, the fossilized skeleton of a Camptosaurus (“twisted lizard”), the Iguanodon’s ancestor. This specimen is named after the West wind in Greek mythology that is often considered the gentlest of the four Anemoi (the gods of wind), each representing a cardinal direction and a season. Zephyr was the messenger of spring in Antiquity.

Zephyr will probably ride the wave of success that dinosaur skeletons have surfed on in recent years. The estimate is a cautious one, says sales expert Iacopo Briano, and could attract collectors from Europe, America, China and the Middle East. The fossil, it seems, would look just right in a modern or contemporary interior. Its size and weight—three meters/9.84 feet long, 1.30 meter/4.26 feet high and about 100 kilograms/220 pounds—make it an original, not to say ideal, living room companion. Zephyr was small but strong and fast. Like all Camptosauridae, it had short forelimbs with five fingers, only three of which had claws, and strong hind legs to support it if it chose quadrupedal locomotion, which the herbivore probably did to munch on juicy shoots in the tree tops. It used its extremely sharp thumbs for self-defense, while its pelvis and beak, probably covered with horn, are similar to those of birds. These creatures could reach a speed of 25 kph/15 mph on their wide feet.

In the Plains of the Far West
Zephyr is a rare find in more ways than one: its particularly well-preserved vertebrae and legs, and its fossilized hip and back tendons. Paleontologists in Italy, far away from the American West’s prehistoric grasslands and marshy prairies, spent thousands of hours restoring and assembling the 150 to 145-million-year-old skeleton, which is 70% complete. Zephyr was found in 2019 in soil belonging to the Morrison formation on private land in Colorado during the building of a road near Dinosaur National Monument and the small town of Dinosaur in Moffat County. The site is rich in fossils deposited by receding floodwaters in a single place. William Harlow Reed unearthed the first Camptosaurus remains in Wyoming in 1879, but the giant lizards also roamed England and France.

Art Basel Miami Beach: An Edition that Promises to be Memorable
Newsfeed
See all news
San Francisco: New Bernice Bing Exhibition
Art Basel Miami is Shaping Up to Be a Memorable Edition
Mexico: Dealer Mariane Ibrahim to Open Gallery
Auction: Marilyn Monroe Is Once Again in the Spotlight
Not to be missed
Spotlight