Founded in 1832, the Yale University Art Gallery is home to an encyclopedic collection of art, displayed in three historic buildings at the heart of New Haven, Connecticut. Particularly strong in early Renaissance, African, and modern art, the YUAG collection continues to grow each year through gifts and acquisitions. 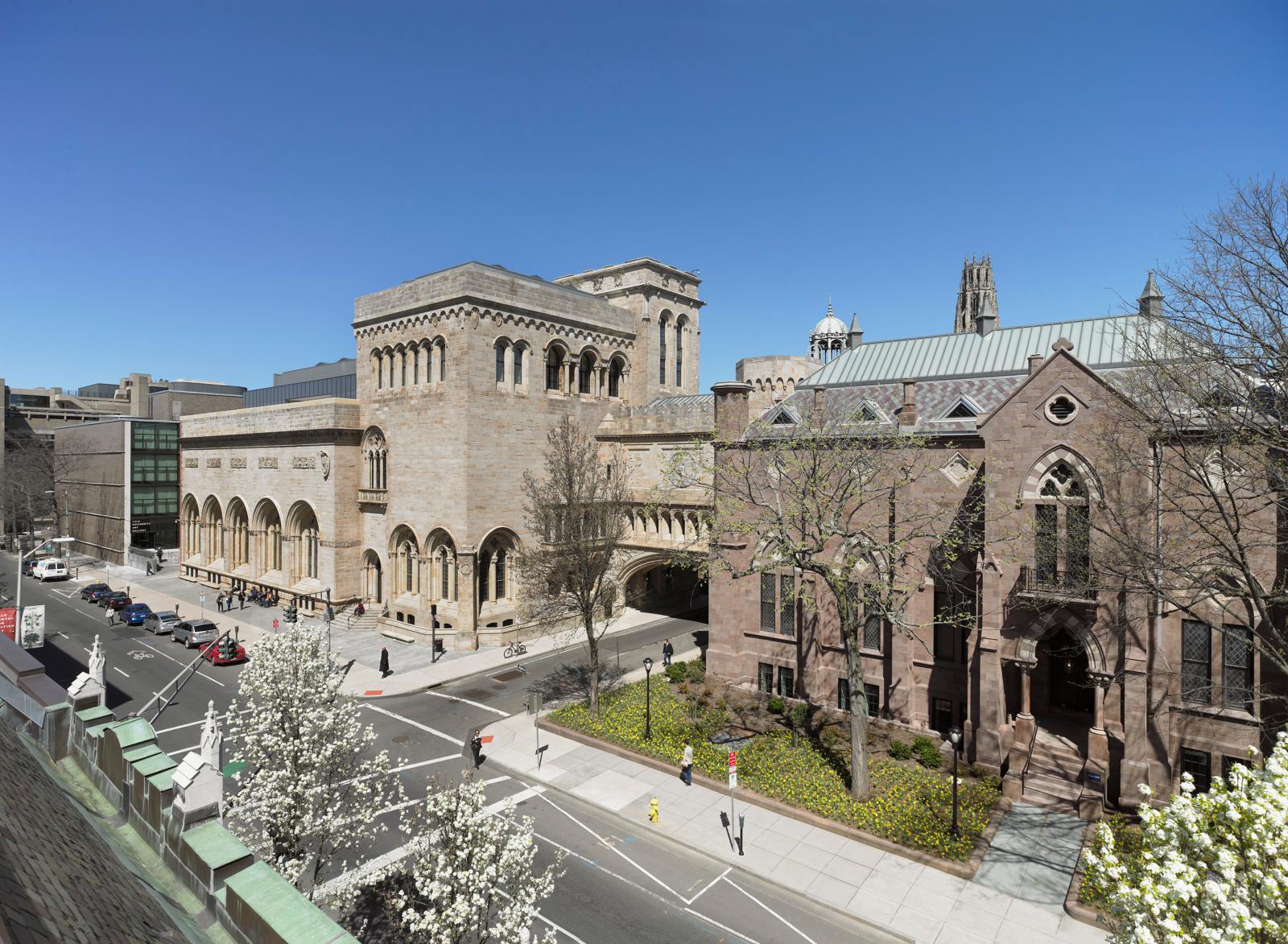 The Gallery’s Beginnings
Yale University’s art collection dates back to a foundational gift made in 1718 by the East India Company official and early benefactor Elihu Yale. The gift included a large sum of money, several boxes of books, and a Portrait of King George I by the British artist Sir Godfrey Kneller. In the century that followed, fewer than thirty-five works were added to the collection. But the situation changed in 1832, when the American artist John Trumbull sold 28 of his history paintings and 60 miniature portraits to the University. Born into a prominent political Connecticut family, Trumbull built his artistic career depicting the events of the Revolutionary War, of which he was himself a veteran. By placing his paintings at Yale, he aimed to secure his artistic legacy. He also designed the neoclassical building for exhibiting the works. It opened to the public on October 25, 1832, making the Gallery the first university art museum in the United States. Trumbull stipulated that he and his wife were to be buried beneath the building, with his art serving as his monument. As YUAG moved to new buildings, so did the artist’s grave, and he rests in proximity to his paintings to the present day.

A Century of Architecture and Design: From Neo-Gothic to Modern
Today, YUAG occupies three connected buildings in downtown New Haven: Street Hall (1866), the Old Yale Art Gallery (1926 -1928), and Louis Kahn’s modernist structure (1953). Designed by Peter Bonnett Wight, Street Hall originally housed the Yale School of the Fine Art, the first art school within a U.S. college. Based on the 13th-century Venetian architecture, Street Hall is an example of Gothic Revival style that would define the appearance of the Yale campus by the early 20th century. Originally called the Gallery of Fine Arts, the Old Yale Art Gallery building was designed by well-known New York architect and alumnus Egerton Swartwout. Influenced by the Florentine Gothic, it features characteristic yellow sandstone, tall, rounded arches, and inventive carved detail throughout the interior and on the exterior. The new building was connected to Street Hall by the High Street Bridge which bears figural allegorical reliefs of Architecture, Drama, Painting, and Sculpture. The metal faces of the large clock on the Bridge’s exterior were designed by the Philadelphia ironworker Samuel Yellin, who also made a series of gates for the Gallery’s interior. One of the foremost metal designers in the U.S. at the time, Yellin worked in the Arts and Crafts style, often quoting motives and elements he saw during his travels in Europe. His gates feature closely observed plant tendrils and flowers, as well as such witticisms as the figures of eales or yales - mythological goat-like creatures with curling horns that swivel in any direction, - which function as a pun on the name of the university.

Louis Kahn’s celebrated museum building, constructed of brick, concrete, glass, and steel, was the first modernist structure at Yale. The interior is defined visually by a remarkable tetrahedral ceiling. Inspired by Buckminster Fuller’s geodesic dome, it is a single slab of concrete of which the weight is distributed to columns at the corners of each of the gallery’s floors. That structural innovation permitted Kahn to treat the galleries as flexible, open exhibition spaces that are easily transformed by modular walls designed to move in any direction along the grid of the ceiling.

An Encyclopedic Collection
In 1871, the Gallery purchased more than one hundred works from James Jackson Jarves, the first American collector to buy early Italian painting. Today, the Gallery’s collection of European art encompasses nearly 2,000 objects, including one of the largest and finest groups of 13th- and 14th-century Tuscan paintings in the world. Throughout the 20th century, the Gallery expanded its holdings in other areas as well. In the 1920s and 1930s, Yale University and the French Academy of Inscriptions and Letters cosponsored excavation of the ancient Hellenistic and Roman site of Dura-Europos in modern Syria. This resulted in the accession of numerous paintings and sculptures from the site’s major buildings, including the wall decoration of the earliest known Christian ‘house-church’ and murals from a synagogue dating to 244 CE.

YUAG has a longstanding commitment to art from beyond Europe. Starting in the 1950s, the Gallery began collecting ancient American art under the guidance of Yale art historian George Kubler, with a major founding bequest by Mr. and Mrs. Fred Olsen. Similarly, between 1937 and 1960, the Gallery’s Chinese and Japanese art collections were established through the gifts of Ada Small Moore, wife of William H. Moore, a New York attorney, financier, and corporate organizer. The most recent addition to the Gallery’s collection of Asian art is a large gift and further promised gift of Japanese surimono from Virginia Shawan Drosten and Patrick Kenadjian. In 2020, the YUAG featured the collection in its Asian art galleries and published a beautifully illustrated celebratory catalog. Produced between1800 and 1840, surimono, literally “printed things,” were privately commissioned woodblock prints that combined images with playful poetry. Often created in honor of the New Year, they were commissioned by poetry societies, which flourished during the Edo period, as well as by Kabuki enthusiasts.

New Directions
As it closes its second centennial, the Yale University Art Gallery is committed to making its collection more accessible, while also promoting diversity, equity, and inclusion through a wide range of initiatives. In 2017, YUAG inaugurated the Margaret and Angus Wurtele Study Center, an open-access storage facility on Yale’s West Campus. The 49,000-square-foot space houses over 42,000 objects and is designed to encourage object-based teaching and learning. In addition to hosting Yale classes and individual researchers, the Center became a popular destination for Connecticut school groups and, since the beginning of the pandemic, it has served as an important resource for distance learning. The Gallery has also been reevaluating its own role and history as a collecting institution. A recent exhibition, "Place, Nations, Generations, Beings: 200 Years of Indigenous North American Art," was curated by Yale students, who participated in a Native American Arts Initiative Internship, sponsored by the Gallery and the Yale Peabody Museum of Natural History. Bringing together objects from YUAG, the Peabody, and the Beinecke Rare Book and Manuscript Library, the exhibition celebrated the historical and contemporary production by Native American artists and artisans, while also reflecting on Yale’s relationship to Indigenous populations whose lands it occupies and to Native American objects in the University’s care. At the same time, the Gallery has been promoting a more systematic and organized approach to provenance research, making objects’ ownership history a more prominent feature in the collections database and on wall labels.