Celebrating an ambitious renovation by Frank Gehry, The Philadelphia Museum of Art reopens to the public with a commitment to broadened histories and reinvigorated community ties. 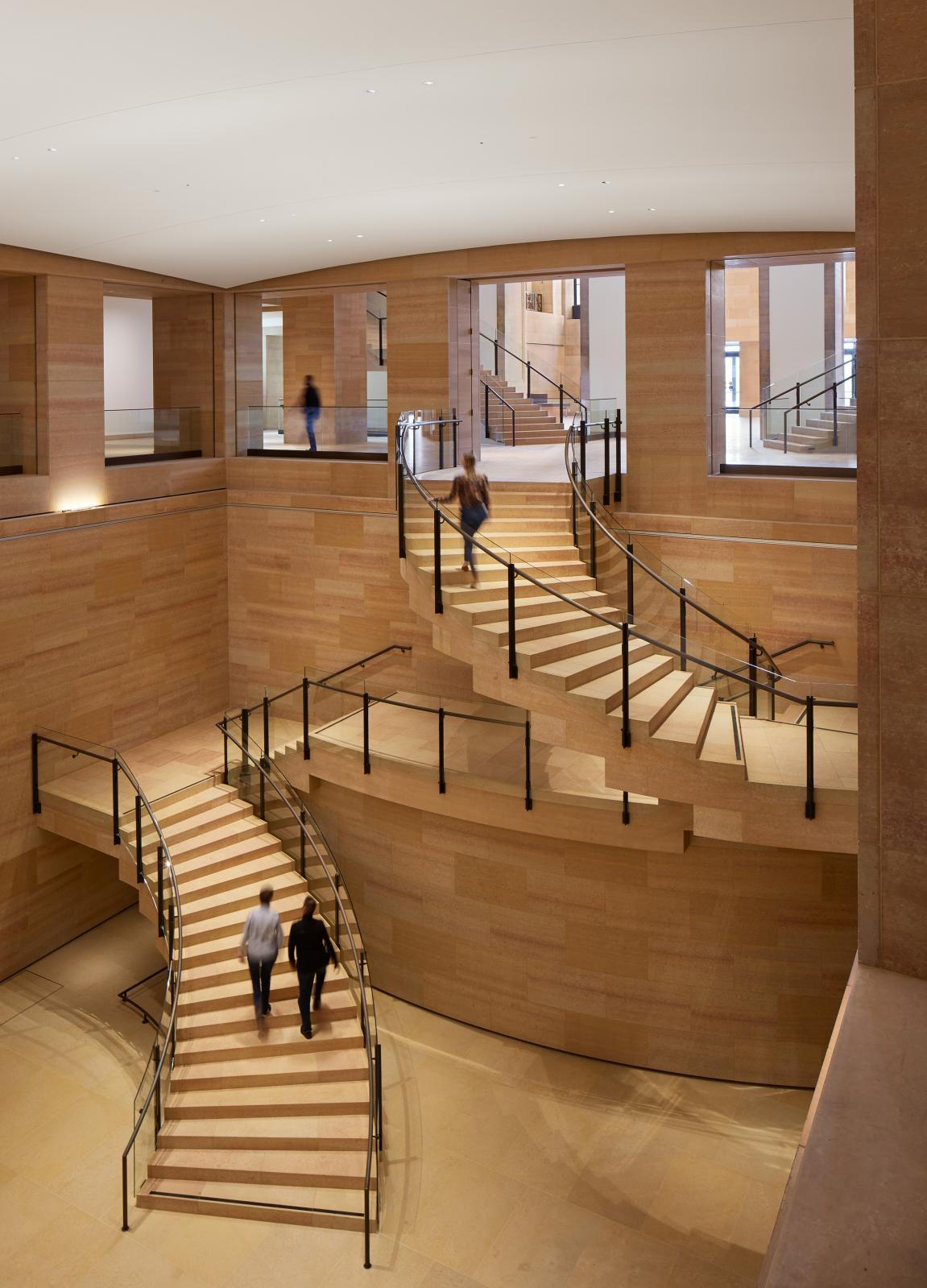 The Philadelphia Museum of Art has unveiled a series of newly renovated spaces by architect Frank Gehry, a major step in accomplishing the institution’s twenty-year Core Project master plan adopted in 2004. Centered on a dramatic great hall and floating staircase, Gehry’s design has added 20,000 square feet of gallery space, transformed former back-of-house spaces into gracious public promenades, installed state-of-the-art mechanical systems, and reoriented entrances to join the museum to surrounding neighborhoods. Although home to world-class collections, the Philadelphia Museum is probably most familiar for the scene in the classic movie Rocky in which Sylvester Stallone jogs up the exterior stairs. Gehry’s renovations were guided by a desire to preserve that immediately recognizable Greek-temple form and monumental prospect at the head of the city’s ‘’Museum Mile.’’

Gehry has transformed notions of architecture with the sweeping volumes of the Guggenheim Bilbao, Walt Disney Hall and Louis Vuitton Foundation, but his work at the Philadelphia Museum remains uncharacteristically demure. Indeed, he was inspired by the challenge posed by former director Anne d’Harnoncourt to achieve the same impact of those buildings in spaces that would largely be underground. The renovation mostly concerned the basement and core of the existing museum, not exactly the tabula rasa required by the architect’s usual formal daring. Gehry’s vision honed to a deep respect for the clarity of the original Beaux-Arts plan and palette of materials. The sculptural exuberance of a typical Gehry building is here restricted to a subtle repetition of gently curving forms. The motif recalls the contours of the ‘’Vaulted Walkway,’’ a circulation axis that runs the entire length of the museum and which Gehry’s design has opened to the public for the first time.

Ground was broken on the original museum building in 1919, one year after the global Spanish Influenza pandemic. The current administration is conscious of the symbolic importance of reopening in the midst of the current health crisis. It has also responded to the growing insistence on increased minority representation within US political and cultural life. (The ‘’Rocky Stairs’’ were the site of a series of  Black Lives Matter protests.) The museum’s renewal therefore well exceeds a simple concern with bricks and mortar. The newly created spaces have provoked reflection on the histories and voices that museums have traditionally overlooked as well as how those might be presented. The reopening has also occasioned a stated institutional commitment to diversity and inclusion at every level of the museum’s operations.

The newly renovated galleries of American art are a key example of such rethinking. As an English colony and subsequent center of cultural life in the early United States, Philadelphia played a key role in the creation of a national American art. The Philadelphia Museum holds an extraordinary collection dating from the seventeenth century onward and it has rehung these galleries in a manner that broadens the standard historical narrative of the United States. Curators have emphasized themes of cultural encounter and conflict, complicated national mythologies of liberty by focusing on enslaved artisans, and illuminated the global connections that birthed the United States. Local Philadelphia institutions have lent objects such as a shell wampum belt offered by the Lenape people to city founder William Penn; prelude to a long history of betrayal and land theft by Europeans. The art of Spanish and Portuguese colonies in the Americas will also be displayed for the first time in the Museum. Equally focused on the present, the museum has dedicated an additional 10,000 square feet of new gallery space to contemporary art, with an inaugural exhibition entitled New Grit that features the full diversity of artists working in Philadelphia.

The Philadelphia Museum of Art has not only reopened. In addition to celebrating Gehry’s expansion of exhibition spaces, the museum has reevaluated itself historically and socially. It has recommitted to its public mission through reinvigorated educational partnerships, community advisory mechanisms to guide collecting and programming, prioritization of working with minority-owned businesses, and addressing implicit biases within the museum’s daily functioning. More than a major turning point in an architectural masterplan, the reopening of the Philadelphia Museum of Art signals its readiness to serve a local and global community for generations to come.

Gabrielle Chanel and Philip Guston: The Museums Are on the Horns of a Dilemma
Newsfeed
See all news
France: BnF Acquires 312 of Emile Zola’s Letters
Drouot: "Sapphire Vision" by Chu Teh-chun Soars to €483,000
Drawing Now Art Fair Announces Its Exhibitors for 2023
France: Marie Antoinette’s ‘Trianon Guitar,’ Is Heading to Auction
Not to be missed
Analyses