In the space of a few years, Josiah Wedgwood managed to combine innovation, industry and craftsmanship. His work is still the quintessence of British Neoclassicism. 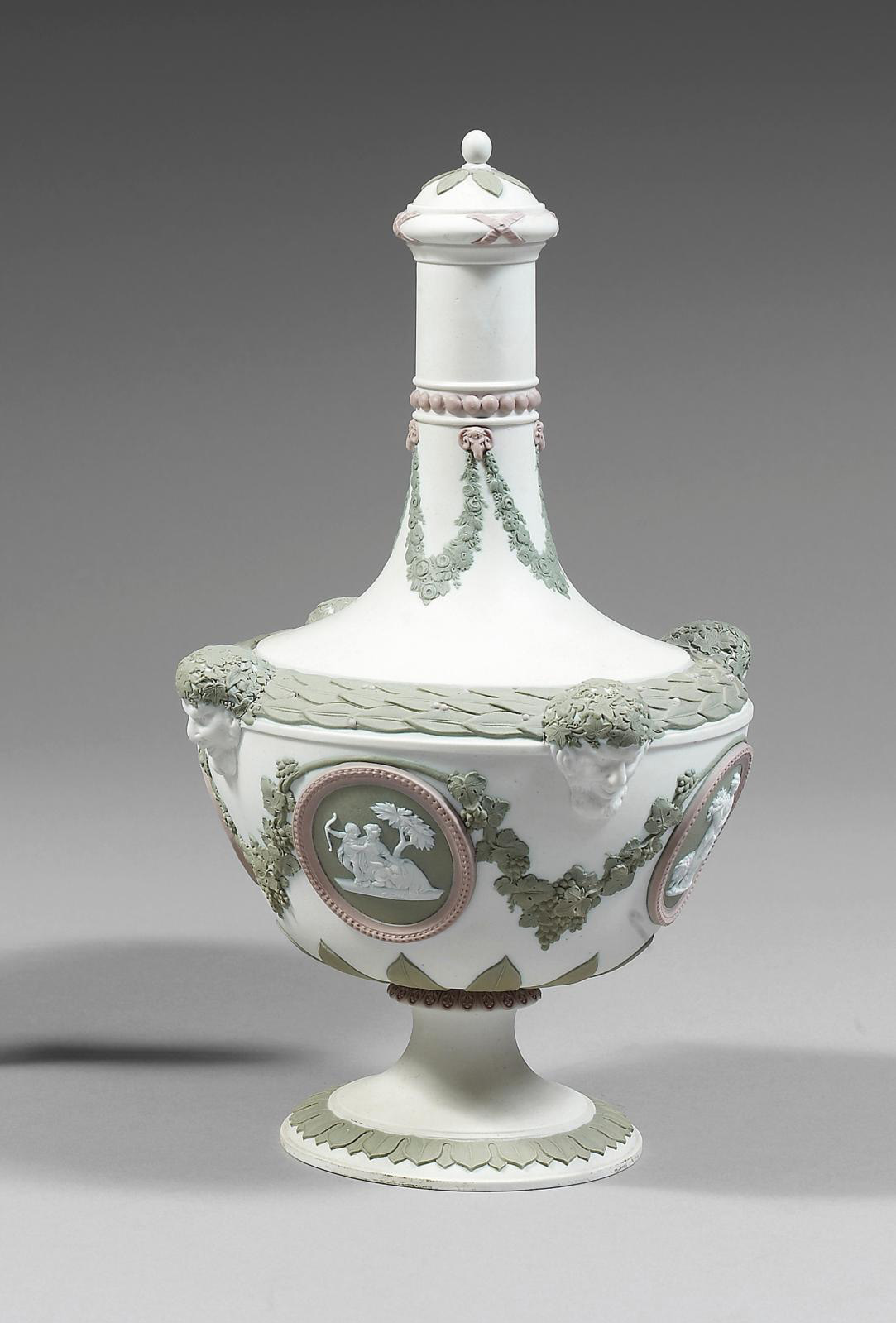 Ironically, a weakened knee left Josiah Wedgwood (1730-1795) unable to finish his potter’s apprenticeship with his brother in the town of Burslem, Stoke-on-Trent. Noting the poor quality of the clay in his home county of Staffordshire, in 1754 he began experimenting with new types of material. Five years later, he joined forces with a potter and developed a refined green glaze to decorate rococo tableware with trompe l'œil fruits or vegetables. However, his obsession was the imitation of porcelain. After many experiments, in 1763 he developed creamware, a fine, cream‑colored earthenware. Queen Charlotte liked the new pottery so much that in 1765 she allowed Wedgwood to call it Queen’s Ware. This opened the door to an aristocratic clientele, which set the tone for all of British society.

As the new, refined products caught on, Wedgwood gave up on the idea of imitating porcelain and began studying artifacts found at Herculaneum and Pompeii. First identified as Etruscan, they inspired him to make a type of stoneware that he called black basalt, whose motifs painted with encaustic recall bucchero ceramics. Halfway between objets d'art and tableware, such pieces had never been seen before. They were introduced in 1768, a year before the opening of Etruria Works, the factory that made the most beautiful Wedgwood products for two centuries. The same year, Wedgwood began a partnership with Thomas Bentley (1731–1780), attested by the new mark affixed to superior quality ceramics. The partnership with Bentley allowed him to export pieces to continental Europe and America, especially utilitarian tableware, which was still made in Burslem.

Wedgwood was prolific. He developed what he called rosso antico, a beautiful red stoneware sometimes combined with black basalt. In the 1770s, this was followed by caneware, a tan stoneware imitating bamboo. During the flour shortage of 1795-1796, caneware became known as pastryware—serving dishes lined with a container, its color making up for the lack of pie pastry. These unmistakable dishes were manufactured in large quantities in the 19th century.

In 1773, Catherine the Great of Russia ordered the innovative Frog Service, creamware decorated with British landscapes named after the palace for which it was made. But if the empress had known about Wedgewood’s experiments, she would probably have set her sights on what would soon make his fortune and posterity.

Emblematic Jasperware
In 1775, Wedgewood created jasperware, a fine unglazed stoneware that could imitate ancient cameos when molded reliefs were applied in a contrasting color. The first pieces were small and pale blue, lilac, sea green, black and, more rarely, yellow in color. Either dye was directly mixed with the clay, called solid jasper, or the body was covered with a dyed slip called jasper dip. The reliefs were sometimes colored on a white background or several colors used together. These pieces were tremendously successful until 1829. The Wedgewood company resumed production of jasper dip in 1844 and solid jasper in 1860.

Wedgwood’s jasperware captured the spirit of the times, won over the wealthy classes by matching the Adam brothers’ pastel interiors and reconciled reassuring art objects—only utilitarian surfaces were glazed—with the thrilling possibilities of industrial production and a Neoclassical timelessness updated for the 18th century. The horse painter George Stubbs designed an equestrian series, John Flaxman created heads of leading contemporary personalities, meeting British demand for miniature portraits, and William Hackwood made the famous, widely distributed Am I Not a Man and a Brother? medallion, which attests to Wedgwood’s abolitionist views. Lady Templeton and Lady Diana Beauclerk also provided some drawings, which charmed the aristocracy. All kinds of items were decorated in this way, from lorgnettes to knick-knacks, small boxes, chess sets and thimbles. Jasperware plaques adorned furniture and removable medallions that could be changed at will.

In the late 1780s, Wedgwood employed two sales agents in Paris: the marchand-mercier (decorative arts dealer) Henry Sykes and his colleague Dominique Daguerre, whose customers included French royalty. His products were so popular that copies proliferated—until a technical feat put the counterfeiters to shame. From 1786, Josiah spent four years copying the ancient Portland Vase, named after the Duke of Portland, who had loaned it to him. Even before a suitable result had been achieved, wealthy patrons were expressing their desire to acquire the object. In 1790, the masterful white and deep blue copy went on display in London, where people paid admission to see it. According to records, the company produced about 40 copies of the first edition, a precious rarity unmatched by any copy made in a single piece. It was manufactured from 1838 onwards.

After Wedgwood’s death in 1795, his sons took over the business, which thrived despite ups and downs. In the 21st century, Wedgwood remains a standard-bearer of British excellence, still combining, as its founder intended, technology and modern creation with traditional craftsmanship.

WORTH SEEING
The jasperware brooches at the Musée de la Vie romantique in Paris and the hollow pieces at the Musée national Adrien-Dubouché in Limoges.

Faience Ducks in the Marseilles Style
Newsfeed
See all news
Prado: A New Frame for "Mercury and Argos" by Velasquez
Narbonne: Thieves Loot the Archeological Site of Villa of La Nautique
Film Screening: "Frida Viva la vida" at the Palais Galliera in Paris
Hauser & Wirth to Open Second Branch in Los Angeles
Not to be missed
Glossary