Faience Ducks in the Marseilles Style

In the 18th century, the talented Joseph Fauchier made the southern French port city of Marseilles one of the capitals of faience or earthenware form pieces like this pair of ducks, perched on their bases. 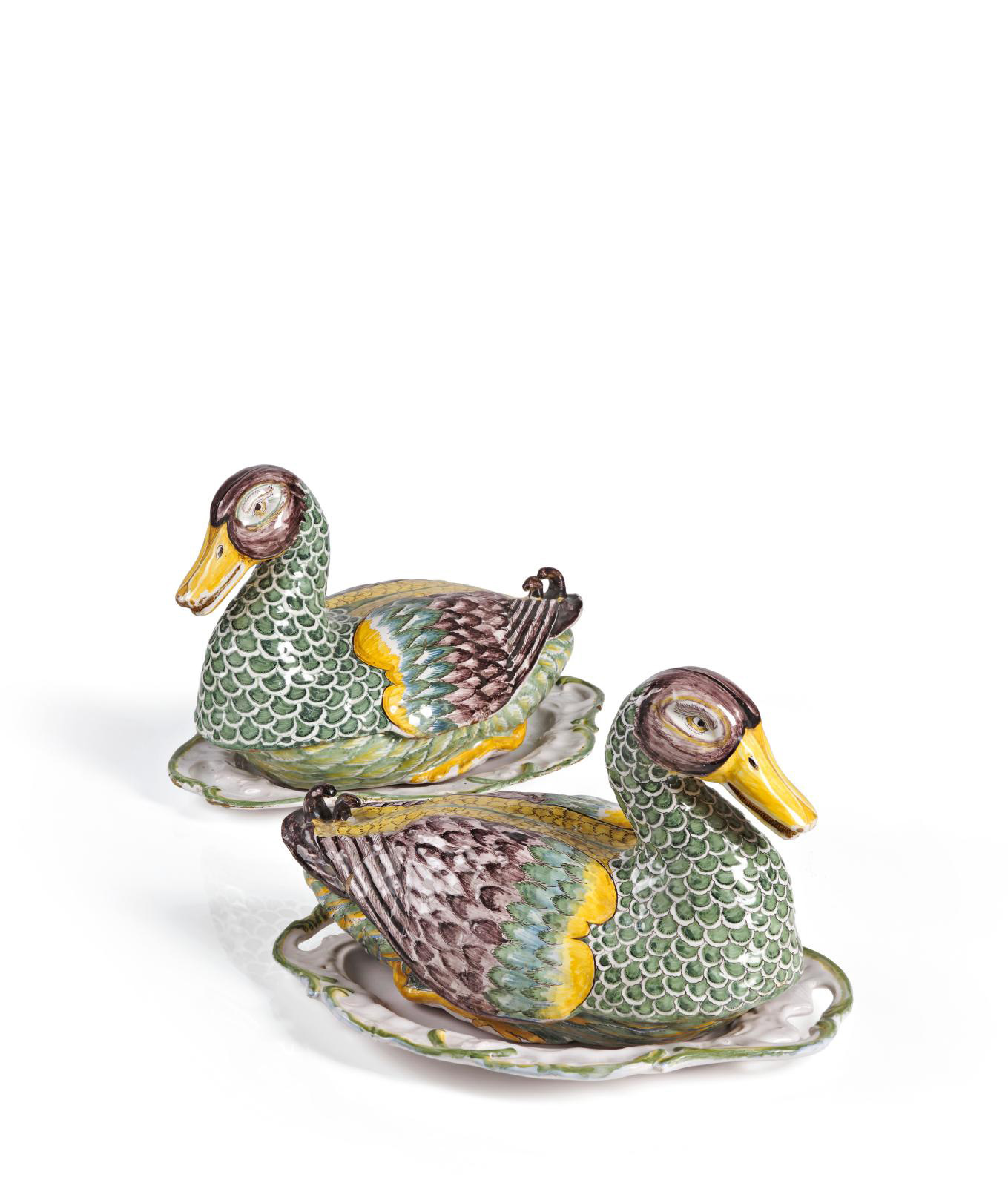 Reflecting the zeitgeist, the credo of European faience makers during a highly imaginative 18th century involved introducing nature into interiors through depictions of guests from the countryside... Starting in the 1730s, they provided customers with a range of utilitarian objects shaped like wild boars' heads, crouching hares and entire chickens and turkeys. Among these naturalistic figures acting as tureens or terrine dishes on the grandest tables, the duck was particularly prominent. Some French companies specialized in it, like the factory of Paul Hannong (1700-1760) in Strasbourg, whose large service made in 1751 for the Elector of Cologne, Clemens August, and consisting mainly of form pieces, was an outstanding example of the genre.

At the same time, Marseilles established itself as the other capital of faience duck production. The modelers of the famous Veuve Perrin factory seized the chance to make original three-legged sauce boats with duck's head handles. But the true master of the Marseilles duck was Joseph Fauchier (1687-1751), whose workshops produced this pair of lidded terrine dishes on oval bases with scalloped edges. This set, fired at a high temperature, is spectacular in terms of both coloring—a delightful combination of pale greens and browns with bright yellow—and the sense of realism conveyed by the half-open beaks and ruffled tail feathers.

Born in Peyruis in Alpes-de-Haute-Provence, Fauchier created his own company in 1730 in Marseilles, after managing the factory of Madeleine Héraud and Louis Leroy. Within a few years, his factory in Place du Pentagone became one of the most important in Marseilles. The entrepreneur first used "à la Berain" decoration, then moved towards more Rococo polychrome landscapes in the style of Moustiers or China. However, his reputation was established by his form pieces and small statuary with their yellowish clay and brilliant glazes, and perpetuated by his nephew—also named Joseph—who took over in 1751. Nowadays, only a few of their ducks have survived. Two are now in museums in the South of France: in Marseilles, at the Musée des Arts Décoratifs, de la Faïence et de la Mode (housed in the Château Borély), and in Narbonne, in the Musée des Beaux-arts. This suggests that there will be a fierce battle to carry off these enchanting web-footed creatures.

Divine Vines by Dodin and Boucher

The Victorious Battle of a Pugnae Ferarum Tapestry
Newsfeed
See all news
The New Orange County Museum of Art Slated to Open in 2022
“Vault by CNN": NFTs of Historic News Coverage to Go Up For Sale
Mexican Railway Development Slowed by the Discovery of 13,911 Pre-Columbian Remains
New York’s Callicoon Fine Arts Gallery to Close After Final Show
Not to be missed
Spotlight
The Heart of French Cabinetmaking During the Ancien Régime…
Among the furniture in René Simeoni's collection, three top names…
Spotlight
A Beautiful Olmec Contortionist
This rare, mysterious, good-sized Olmec sculpture, one of the world’s…
Spotlight
From Marquet to Buffet: A Collection Full of Provencal…
From Charles Camoin to Albert Marquet and Bernard Buffet, the paintings…
Spotlight
Pierre-Paul Prud'hon’s Unfulfilled Dream of Love
French artist Pierre-Paul Prud'hon’s study of an unattainable love…