The architectural masterpiece designed by Eileen Gray in Roquebrune-Cap-Martin on the French Riviera has now reopened to the public, after a long period of neglect and five years' meticulous restoration. A manifesto of 1920s modernity. 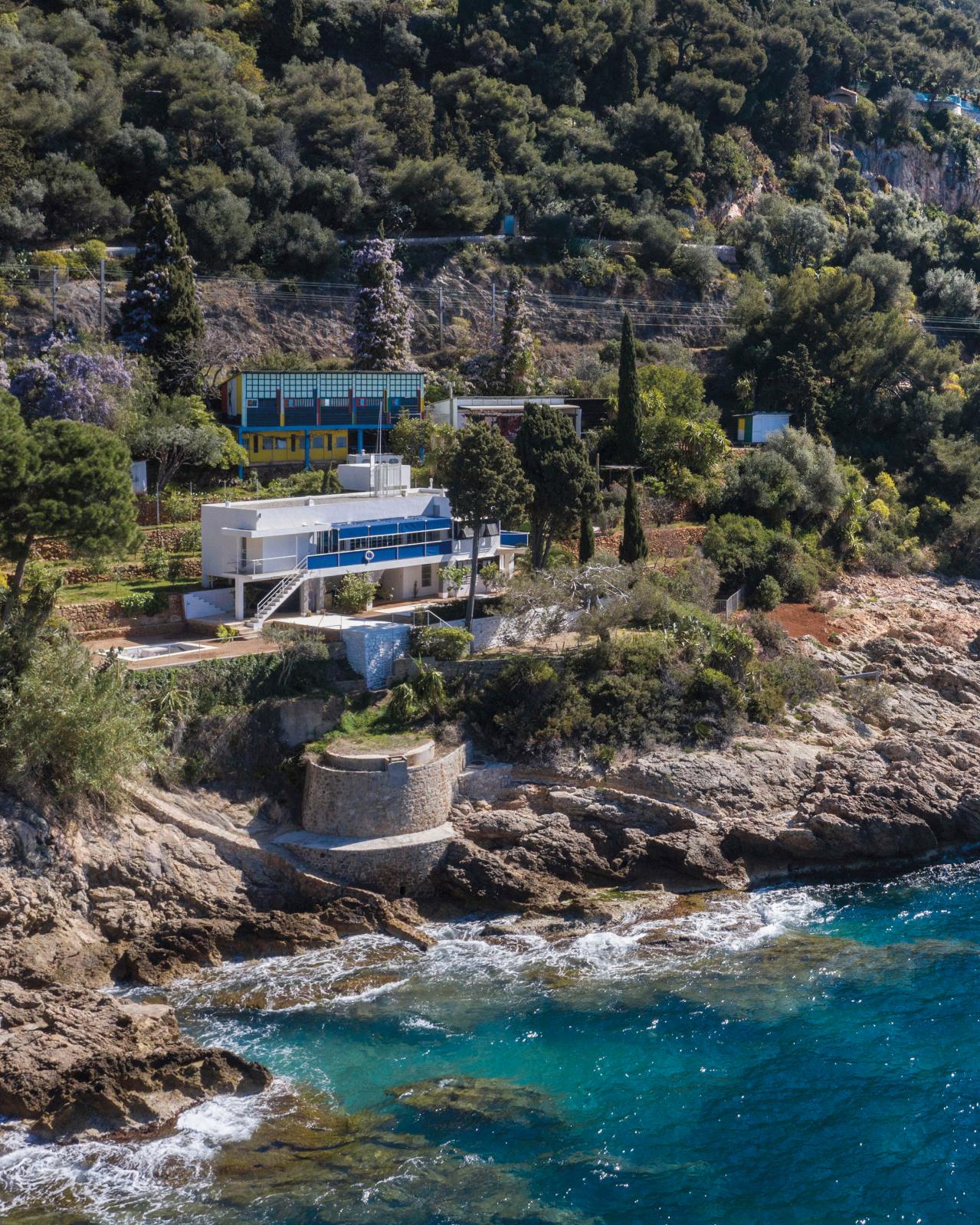 To find the perfect location for this "house by the sea" sought by Eileen Gray (1878–1976) and her companion, Romanian architect Jean Badovici (1893–1956), the designer traveled the entire French Riviera coastline from Saint-Tropez to Menton, finally settling on a plot covered with pine trees and lentisks (an evergreen shrub) in the Roquebrune Bay. The site was difficult to access, boxed in by the water and the railroad, and the narrow terrain was planted with a tangle of citrus trees all the way down to the rocks. But the view of the Mediterranean in all its immensity was breathtaking.

Badovici bought the land in 1926. Gray started working on plans for a narrow L-shaped villa of 1292 square feet (120 sq meters), designing the furniture, refining the decoration down to the smallest detail and creating a total artwork that stands today as a manifesto of her style and ingenuity.

By then the 48-year-old Irishwoman was a celebrated designer. After studying at the Slade School of Fine Art in London, she had focused on drawing at the Colarossi studio—which Jeanne Hébuterne and Camille Claudel also attended—and at the Académie Julian in Paris. She went traveling, learned the art of lacquering with a Japanese expert and studied traditional weaving in the Moroccan Atlas Mountains. Parisian by adoption for many years, she had her own gallery in Rue du Faubourg-Saint-Honoré, where she sold all her designs: refined screens, furniture, hangings, lamps, carpets and complete interior decorations, all much sought-after by a wealthy clientele that included Charles and Marie-Laure de Noailles, Philippe de Rothschild, Elsa Schiaparelli and Jacques Doucet.

For her vacation home, which soon became one for Badovici and his friends, Gray designed a flat-roofed building on stilts extended by balconies and terraces wide open to views of the Mediterranean and the garden. It was rather like a "small ocean liner" anchored within its drystone walls, where everything evoked the sea, like the steel wire railings, the navy blue heavy canvas blinds, the white buoy hanging on the balustrade, and the large map of the world nailed to the living room wall. The light was the reigning influence, and everything was deliberately simple so that everyone could "remain free and independent", as the couple wrote in a special issue of Architecture vivante (Living Architecture, fall-winter 1929), published by Badovici, which gave a detailed description of the house and its contents.

Made of reinforced concrete and hollow bricks, the building had two levels connected by a spiral staircase leading to a few rooms equipped with systems designed to close off, open up or provide transitions. The furniture and ornamental elements seemed basic but were in fact extremely sophisticated, with sliding walls to create sub-spaces, concealed storage units, swiveling superimposed drawers, shelves hugging the walls and adaptable furniture—like this small chrome-plated bedside table, whose height could be adjusted with a chain, and this reading stand with a folding metal arm.

Some of the furniture designed for the villa or exhibited in Gray's gallery became legendary, like the Transat armchair inspired by the furniture on cruise ships, the Bibendum chair echoing the Michelin Man, and the E 1027 side table in painted tubular steel and Plexiglas (the original is now in the Centre Pompidou collection). As the house was small, everything had to be carefully considered and fitted. Thus, small labels indicated the position of each item especially in the bathroom and the kitchen, which extended outside. The designer planned every single accessory, right down to the hand-stitched leather mailbox, whose round opening made it possible to see if there was any mail.

After three years, the villa was ready. It was baptized E1027: "E" for Eileen, "10" for Jean's initial—no. 10 in the alphabet—"2" for the B in Badovici and "7" for the G of Gray. But in the end, the designer who imbued the place with her spirit spent very little time in this paradisiac residence that seemed to float on the waves, for the couple separated in 1932. A new chapter of the villa's life began with a distinguished guest: Le Corbusier.

Invited by Badovici to stay at Roquebrune-Cap-Martin, the architect began by decorating the walls of the villa with large paintings. When she learned about this, Eileen Gray was enraged at the thought of her work being disfigured in this way. He then built a cottage, his "château on the Côte d'Azur, 12 x 12 feet (3.66 x 3.66 m) [...], an extravagant place of comfort and kindness," in which he and his wife spent their summer vacations until his death by drowning in August 1965 in the sea across the way. When he lived there, Le Corbusier would lunch and dine at the Étoile de Mer, a "snack bar" next to his cabin which Thomas Rebutato, a plumber from Nice turned restaurant owner opened in 1950. Out of friendship, Le Corbusier decorated it with his paintings. He also designed some multicolored camping units for rentals.

Tightly packed into a tiny space, the complex forms a remarkable site that more or less survived the next few years. After Badovici's death in 1956, Villa E-1027 passed from one owner to the next; its furniture and fittings were sold, and when in 1999 the Conservatoire du Littoral (Coastal Conservatory) bought it (with help from the municipality of Roquebrune-Cap-Martin) the long white house had become a dreadfully vandalized squat. Initial restoration work was undertaken in the early 2000s, but there were no guidelines and the work did not get very far. In 2014, the town hall turned to Michael Likierman, a businessman and patron of the arts who had already saved the gardens of the Serre de la Madone (built between 1924–1939 by the American Lawrence Johnson) and the Colombières Villa and Gardens in Menton from disaster. He founded an association, Cap Moderne, supervised by a specialist scientific committee chaired by architect and historian Jean-Louis Cohen, and an honorary committee under the aegis of Prince Albert of Monaco—whose mother, Princess Grace, was of Irish origin. A sponsorship appeal raised €2.5 M on top of the €3 M in subsidies obtained from the DRAC (regional cultural affairs department), the Département, the Region and the public establishment owning the site.  It was soon decided to restore the villa to its 1929 state, using Gray's and Badovici's descriptions and photos contained in a book.

As the work progressed, the team of architects took on new challenges: making identical copies of the furniture once present inside; scraping the walls to find the original colors—scorched earth reds, the blues of the sea, the greens of the garden—and redoing the printed glass screens in the entrance, a task entrusted after many twists and turns to a Parisian craftsman who engraved the glass with a diamond bit. Also, replacing the stenciled messages once scattered here and there by Eileen Gray: "Enter slowly", "No laughing", "One-Way": droplets of poetry reminding visitors of the carefree summers this true holiday home experienced in the past.

Lalanne, Gray and Vautrin: The Charlie's Angels of Design

The Sublime Dystopian Visions of Superstudio
Newsfeed
See all news
San Francisco: New Bernice Bing Exhibition
Art Basel Miami is Shaping Up to Be a Memorable Edition
Mexico: Dealer Mariane Ibrahim to Open Gallery
Auction: Marilyn Monroe Is Once Again in the Spotlight
Not to be missed
Cultural Heritage