Their sublime, dystopian visions of the future were extreme and unbuildable, but they influenced a whole generation of architects. Fifty-five years after the founding of the radical Italian architecture collective Superstudio, a new Brussels exhibition pays homage to the power of their provocative images. 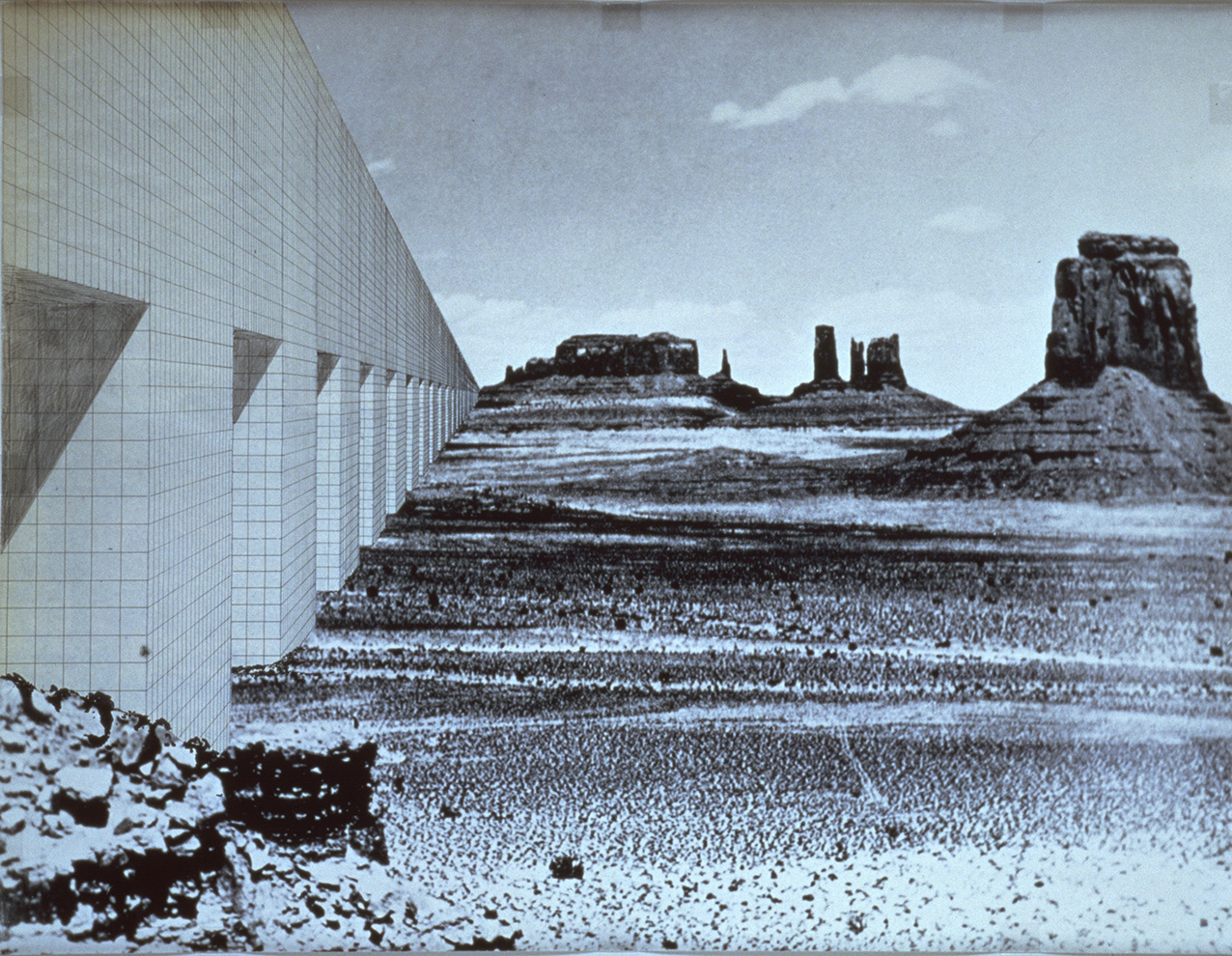 It seems like something from a dream, buried deep in your subconscious, this infinite, immaculate structure stretching to the horizon, a white line plowing across the desert, engulfing Manhattan in its gridded grasp, slicing through the Austrian city of Graz, marching imperturbably over hill and dale, encircling the globe in its technofuturist embrace. What it is made of, or what happens in it, nobody can say. All we know is its scale is terrifying and its relentlessness sublime. Il Monumento Continuo—The Continuous Monument in English—was a series of photomontages produced half a century ago, in 1969–70, by the Italian architecture collective Superstudio, whose arresting images of a radical future marked a whole generation of architects—Zaha Hadid, Rem Koolhaas and Bernard Tschumi among them. Fifty years later, the Continuous Monument is one of the highlights in a comprehensive retrospective of the group’s work, “Superstudio Migrazioni”, curated by Emmanuelle Chiappone-Piriou at CIVA, the center for architecture and urbanism in Brussels.

In the Beginning
Superstudio was founded in 1966 by Adolfo Natalini and Cristiano Toraldo di Francia, who met at the architecture faculty in Florence. In 1967 they were joined by the industrial designer Roberto Magris, in 1968 by the architect Gian Piero Frassinelli, and in 1970 by Magris’s brother Alessandro and by Alessandro Poli, also architects. You might think, given the megalomania at work in the Continuous Monument, that the group’s name was a macho celebration of the architect’s ego, but in fact, like everything they did, it was steeped in humor and irony. For Superstudio came of age in the era that spawned the supermarket, and their moniker was a reaction to the overproduction and overconsumption, as they saw it, of the postwar economic boom in the West. Their very first public manifestation, organized with fellow Florentine radicals Archizoom, was the small 1966 exhibition "Superarchittetura", which showed Pop-inspired objects and interiors whose bright colors, tinged with surrealist psychedelia, echoed the relentless brashness of advertising and merchandising and were intended to be at once “the thing and the image of the thing.” But beneath the rainbow-hued saccharine surface was a serious intent, influenced, among others, by Operaismo, a Marxist-inflected workers’ resistance movement founded in the early 60s during union disputes with Fiat in Turin. “Superarchitecture is the architecture of superproduction, of superconsumption, of superinducement to consumption, of the supermarket, of superman and of super gasoline,” proclaimed the poster advertising the show. “Superarchitecture accepts the logic of production and consumption and exercises on it a demystifying action”—if architecture and design were complicit in the system, the only way to resist was through irony, satire and provocation.

“In the beginning,” explained Natalini, 30 years later, “we designed rather fantastic objects for production in wood, steel, glass, brick or plastic. Then we turned to the production of usable objects like chairs, tables and cabinets, but these were designed in a deliberately neutral way, a criticism of consumer culture and the continuous drive for novelty.” Gone were the Toontown colors and forms, replaced by the orthogonal abstraction of the grid, which they applied not only to furniture, as black lines ruled on white laminate, but also to a series of villa designs (none of which were built), coldly clad in clinical white tiles like a hygienist Swiss bathroom. “Finally,” continued Natalini, “we started designing negative utopias like Il Monumento Continuo,”—the grid scaled up to the dimensions of the globe—“images warning of the horrors architecture had in store with its scientific methods for perpetuating standard models worldwide.” Mixing Modernist techniques of photomontage with good old-fashioned linear perspective (as developed in the 1400s by Brunelleschi in Superstudio’s hometown of Florence), the scarily compelling Continuous Monument images were produced at a time when venerable old cities like Genoa were being scarred by highway viaducts driven bang through their centers in the name of “progress” and the unstoppable circulation of goods and capital. But The Continuous Monument was profoundly ambiguous: looking back to historical archetypes such as the Great Wall of China, the Pont du Gard and ancient-Egyptian mastabas, it was as mute, mysterious and pseudo-mythological as the black monolith in 2001: A Space Odyssey (which had just been released), at once a very practical answer to the ghastly uniform sprawl that was blighting cities across the world—instead of endless suburbia, why not tidy everything away into a continuous linear building that demarcates a clear divide between countryside and nature?—and a distillation and sublimation of the very same bland uniformity it purported to counter.

A Single Continuous Environment
Inspired by the promise of computing and the IT revolution, Superstudio took the idea to its ultimate extreme with their Supersuperficie (Supersurface) proposal, which featured in the 1972 exhibition "Italy: The New Domestic Landscape" curated by Emilio Ambasz at New York’s MoMA. In opposition to the old Modernist idea of the Existenzminimum—the smallest surface needed for dignified human habitation, born from the development of economical social housing for the working classes—Superstudio imagined an Existenzmaximum in which their grid became an infinite network of energy and information, whose intersections would act as universal plug-in points for primary needs: water, food, light and information. Freed from labor, humanity would return to its original nomadic state, wandering in a state of perpetual leisure across the grid, true democracy having been finally achieved since every point on it would be identical, none better than another. But the flip side, as Superstudio wrote, was that the “single continuous environment” of the grid was in fact “the world rendered uniform by technology, culture, and all the other inevitable forms of imperialism”—Western rationalism pushed as far as it would go, the ultimate architectural horror of a scientifically perpetuated standard model rarefied to an extreme of pure image, networks and communications (and, as such, an ironic comment on Superstudio’s own superpowers as image-makers and networkers on the international architectural scene).

That all of this, though provocative, was essentially a dead-end soon became clear enough, especially once Superstudio had taken the next rational step and shipped their grid out to space (L’architettura interplanetaria, 1970-71). At the instigation of Frassinelli (who joined the group just as the Continuous Monument began to take form, and was horrified by what he saw as “a sort of giant global prison”), Superstudio’s work had already begun to take a more anthropological turn, for example in the Dodici Città Ideali (Twelve Ideal Cities, 1971), a series of dystopian urbanities, in part inspired by the metafictions of Borges, that reserve horrible fates for their inhabitants. At the end comes a “test” for the reader—are you for or against the construction of such places?—and, depending on your answer, you’re labeled either an “idiot” or a “zombie” for not having realized that the twelve cities are in fact parables of today’s world. The get-out card from the impasse turned out to be a return to the rustic, in the form of projects such as Global Tools (1973–75), which examined the objects produced by pre-capitalist, pre-urban societies - life completely off-grid or Cultura materiale extraurbana (1973-78), in which Superstudio analyzed the “survival techniques” of rural inhabitants faced with the onslaught of urbanization.

The Superstudio Legacy
By this point, none of the group’s members were getting any younger. In a profession dominated by the old, they had spent their youth exploiting the possibilities offered by paper dreams and the international exhibition circuit to achieve a place in the sun. But, as age and family responsibilities pushed them into more conventional roles, they began to go their separate ways—teaching, building, making art, designing furniture and interiors—, and, by the early 80s, Superstudio had disbanded. Their youthful provocation had been enormously influential, but found little echo in their later architectural output (Natalini’s very Postmodernist buildings of the 80s and early 90s, for example), to the surprise of many (Koolhaas included, as he explains in the CIVA catalog).

Half a century later, however, Superstudio’s fears for the future have lost none of their pertinence in our ever more connected and globalized world, while their interest in ancestral techniques chimes with many of the climate-conscious design ideas favored today.

Claude Lalanne and Eileen Gray Reunited in Success
Newsfeed
See all news
Madagascar: The Exhibition Space of the Fondation H Opens in 2023
Art Antwerp Is Gearing Up for Next Week
Les Filles du Calvaire Gallery Represents 4 New Artists
Collector Bernard Arnault Tops the Forbes List as Richest Person in the World
Not to be missed
Analyses