This pictorial testament by the neoclassical painter takes us on a wonderful journey back in time. The sweeping panorama attests to his virtuosity and outstanding archeological knowledge. 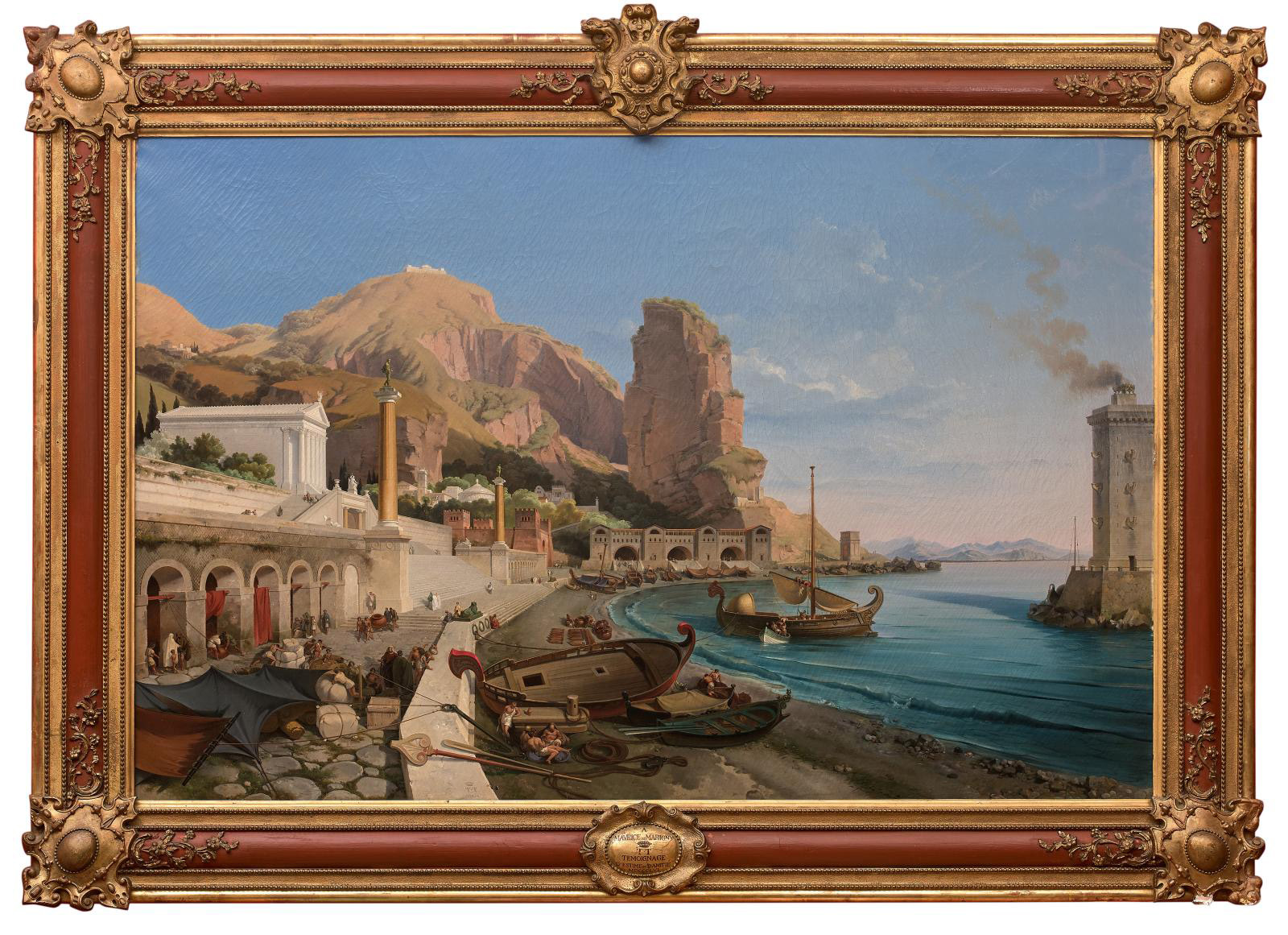 In the early 19th century, every European artist worth his salt traveled to Italy, an open-air museum that hinted at what Greco-Roman civilization was really like. One of them, Lancelot-Théodore Turpin de Crissé (1782-1859), has a prominent place, brilliantly illustrated by his great 1854 panorama Vue imaginaire d'un port antique (Imaginary View of an Ancient Harbor). This late work sums up all the talent of a man who seemed destined for an artist’s life. He was born into an aristocratic family of amateur painters, who were his only teachers. His father, Henri-Roland-Lancelot (1754-c.1800), was a colonel in the French Hussar Regiment who simultaneously pursued a painting career and eventually entered the Royal Academy of Painting and Sculpture in 1785. His mother, Émilie-Sophie de Montullé, survived the Revolution by painting miniatures. The influence of his godfather and mentor, Marie-Gabriel-Florent-Auguste de Choiseul-Gouffier (the Count of Choiseul), turned out to be even more decisive.

An All-Consuming Passion for Italy
The Count of Choiseul was ambassador to the Ottoman Empire, an author famous for his Voyage pittoresque de la Grèce (Picturesque Journey to Greece) and a great collector of antiquities, some of which are now among the Louvre’s most prized possessions. He set young Lancelot on his path by sending him to Rome in 1807 to complete his studies. Back in France, he was appointed chamberlain to Empress Josephine, who was rumored to have become his lover. But the artist’s real mistress was always Italy: he stayed there three times from 1816 to 1829 while holding various administrative posts at the Academy of Fine Arts and the royal museums.

Italy was one of his main sources of inspiration. Most of the paintings he showed at the Salon every year were of landscapes and cities located in the south from Lazio to Campania. In 1828 some of his scenic drawings were published in Souvenirs du golfe de Naples (Memories of the Gulf of Naples), a 39-plate carnet dedicated to the Duchesse of Berry. But when Louis-Philippe became king, Turpin de Crissé, a dyed-in-the-wool legitimist, retired from his official functions to focus on art. However, he painted less: collecting pictures by Old Masters and his contemporaries as well as first-rate archeological objects had by then become his true passion. At his death in 1859, most of his treasures, whose estimated worth was put at a million francs at the time, were bequeathed to the Museum of Fine Arts in Angers.

From Neo-Classical to Neo-Greek
Born into the corridors of power, Turpin de Crissé seems to have kept his distance from the art world. His paintings were in the neoclassical style pioneered by Pierre-Henri de Valenciennes and developed by Achille-Etna Michallon and Jean-Victor Bertin. These works followed specific rules and featured subjects from ancient history and mythology to depict an idealized nature. In the 1840s Turpin de Crissé came under a new influence: neo-Greek art. Its proponents, including Jean-Léon Gérôme, Charles Gleyre and Dominique Papety, advocated clear lines and more synthetic colors. Turpin de Crissé obviously remembered this in Vue imaginaire d'un port antique (Imaginary View of an Ancient Harbor), a crowded scene whose realism brings "sword-and-sandals" movies to mind. “This work combining classic landscape painting with a passion for archaeology can be considered the climax of everything the artist loved and did all his life,” says Turquin de Crissé scholar Jérôme Montcouquiol.

Back in Magna Grecia
Turpin de Crissé’s panorama, which he painted for his friend Maurice de Marigny, as the cartouche signed with the monogram “TT” indicates, takes us on a journey back in time, recreating an ancient Greek colony in Sicily as faithfully as possible. The city depicted may be Messina, founded by the Chalcidians in 743 BCE and one of Magna Grecia’s greatest ports: the basin’s characteristic curved shape can be recognized. Its arcades are a busy place where sailors unload goods from galley ships. Above the waterfront stands a Corinthian temple, probably dedicated to the god Neptune, as the trident-wielding statue at the entrance suggests. In the background, the city rises in stepped terraces behind a red brick fort with four crenelated towers next to an imposing arsenal sheltering ships. But the most interesting feature is on the right: a square-based, slightly pyramidal lighthouse. Its characteristic shape, rostrums and smoke billowing up from a brazier recall its famous counterpart: the vanished lighthouse of Alexandria.

Philippe Costamagna: Napoleon's World of Art
Newsfeed
See all news
David Hockney’s Design for the London Subway Is Mocked Mercilessly Online
Mixed-Media Artist Robert Longo to be Represented by Pace Gallery after Metro Pictures Closure
Submissions Open at ETH Zurich for Scholarly and Experimental Articles
Latinx Art Expert E. Carmen Ramos is Appointed National Gallery of Art’s Chief Curator
Not to be missed
Spotlight
Monet's Impressionist View of Dieppe
Monet uses subtle variations in light to depict this town in Normandy,…
Spotlight
Seurat at Work
A fine discovery is up for sale with the Beaussant Lefèvre auction…
Spotlight
Faience Ducks in the Marseilles Style
In the 18 th century, the talented Joseph Fauchier made the southern…
Spotlight
The Dark Eye of Odilon Redon: Dreamer of the Infinit…
Four drawings by Odilon Redon, bought by Louis-Charles Libaude at…