The art of the miniature reached such heights in 15th-century Flanders that the period be could be dubbed the golden age of illuminated manuscripts. Works of the Ghent-Bruges School, like this Salisbury Book of Hours (Book of Hours for the Use of Sarum), stand out among its refined creations. 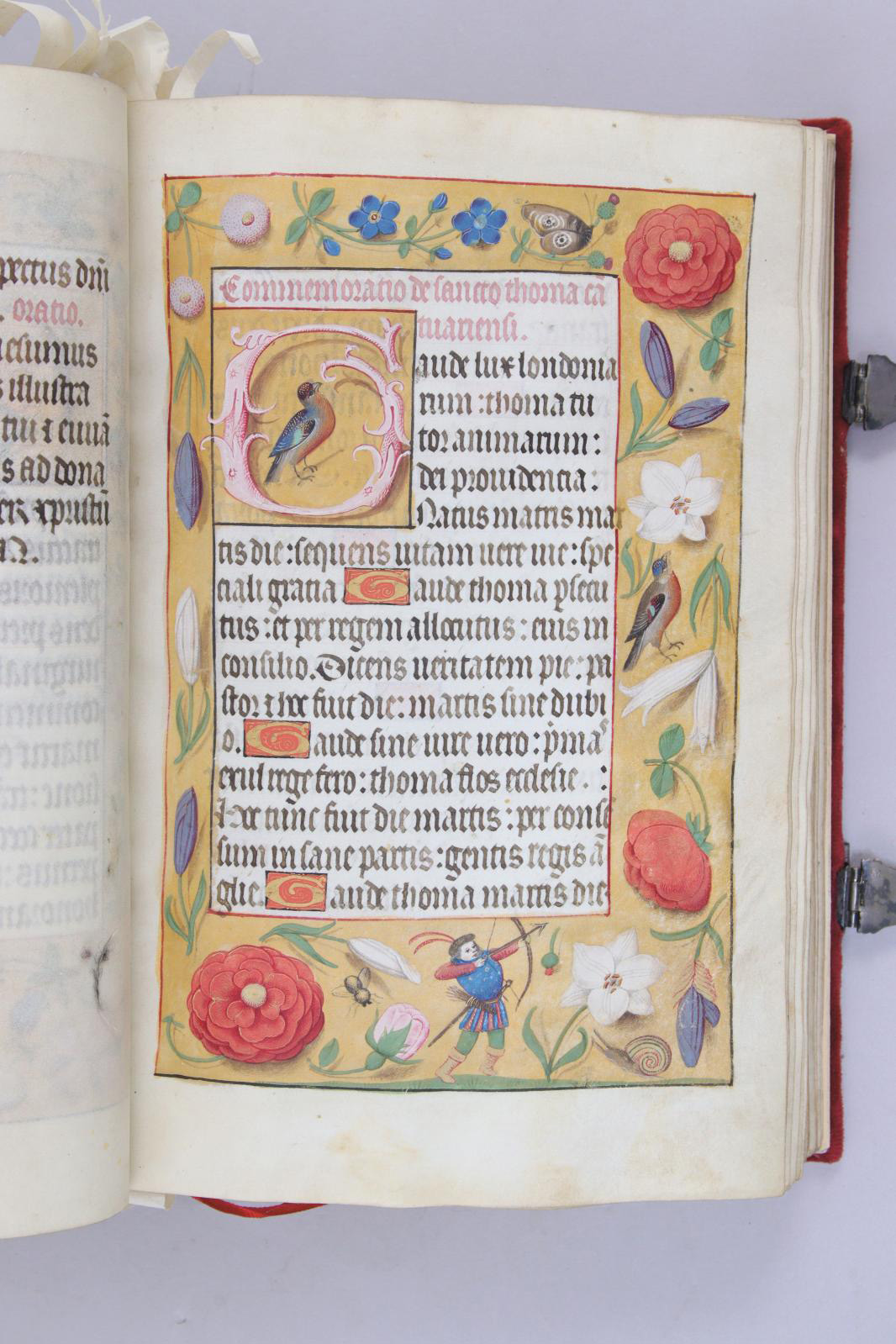 Influenced by easel painting, illuminated manuscripts underwent unprecedented changes in 1470s Flanders. Illustrators turned away from still-medieval motifs to embrace a new, free, naturalistic style. Large miniatures, now paintings in their own right, mingled landscapes, flowers, fruits, animals and portraits within the frame. One of the movement’s main pioneers was the Master of the Dresden Prayer Book, who was active until 1515. This prolific artist inserted the nuanced pastel ornamentation, colored backgrounds and even trompes-l'œil characterizing the Ghent-Bruges School into the margins of Books of Hours. These painted manuscripts became famous and were exported throughout Western Europe. A dazzling example is this Book of Hours from Salisbury (Sarum)—whose title, in Latin, is Horae beatae Mariae Virginis secundum usum Sarum—a manuscript on vellum whose illuminator remains anonymous. It belongs to a small body of Flemish works made for English nobles in the Wiltshire cathedral town.

Symbols and a Snail
Like its counterparts, this book was adapted to the patron’s worship practices. The litany of saints includes figures prominent in England, such as Saint Swithin, Saint Brigida and Saint Editha, and there is a prayer in honor of Saint Thomas Becket, the archbishop of Canterbury who was slain in his own cathedral. But the decoration of this lavish 137-leaf work, whose full-page miniatures are missing, points to its undeniable continental origin. Brilliant ornamentation features 16 pages adorned with a large initial on a gold ground, while wide borders feature birds, insects, roses, lilies, strawberries and redcurrants. Many of the motifs are rich in symbolism. The peacocks, caterpillars, butterflies and an archer pointing his arrow towards the sky evoke eternity and the immortality of the soul. Others slyly refer to the illuminator's way of life: the snail probably represents him traveling from city to city with his luggage. The technique attests to outstanding artistry, especially the application of gold on a red minium ground and the colors applied with a very fine brush. All of these clues, says expert Jean-Paul Veyssière, suggest that the illuminator "might be the same one who made the borders, initials and letters of the Grimani Breviary, the Ghent-Bruges School masterpiece now in the Biblioteca Marciana in Venice.”

Hymns from a Fifteenth-Century Antiphonary

A 15th-Century Nativity Scene Goes to the Musée de Cluny
Newsfeed
See all news
San Francisco: New Bernice Bing Exhibition
Art Basel Miami is Shaping Up to Be a Memorable Edition
Mexico: Dealer Mariane Ibrahim to Open Gallery
Auction: Marilyn Monroe Is Once Again in the Spotlight
Not to be missed
Spotlight