Three unpublished illuminated books of hours that belonged to the same family for nearly three hundred years provide an opportunity to examine the art of the books in the 15th century. 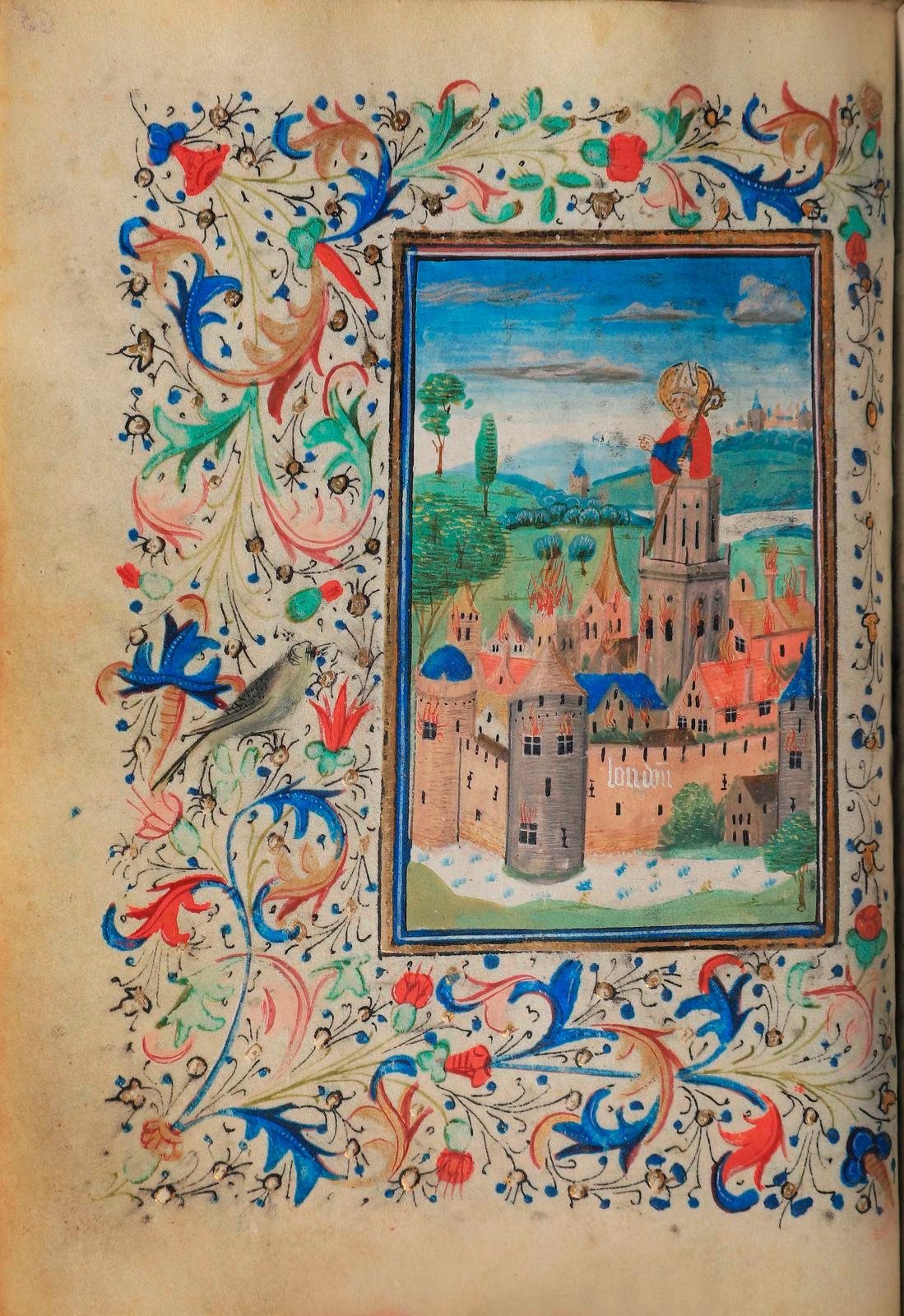 Books of Hours, which became popular during the 15th century, are not rare, but often charged with particular emotions, both sacred and intimate. Forgotten for many years, these Books of Hours are now available for the pleasure of collectors and specialists. "The principal feature of these manuscripts is that they come from the same family. One of them found its way into the hands of the current owners, through a series of alliances that go back to the patrons in the 1520s," emphasizes the expert, Ludovic Miran.

The Marquis de Lagoy: A Prestigious Provenance
The family of Jean-Baptiste Florentin Gabriel de Meryan (1764-1829), better known under his title of Marquis de Lagoy, gives these books a distinguished provenance. Born in Arles, France, he was renowned for his important collection of 2,500 drawings, rather than his military or political career as a committed royalist, an officer in the King's regiment until the Revolution and then a deputy from Aix-en-Provence under the Bourbons. Having even trained in engraving to popularize his drawings, he was also the nephew of the great book collector at the origin of the library of Aix-en-Provence, the Marquis de Méjanes. The latter made him his heir apparent. It is worth noting that each of the books has an old bookplate bearing the handwritten inscription "Belongs to the Marquis de Lagoy".

Of Noble and Princely Lineage
Ludovic Miran is keen to point out that "these three Books of Hours have never been cataloged, nor have they ever been sold in modern times". Once the provenance had been established, an examination of the contents quickly showed that they contain the traditional chapters for this type of work: Liturgy of the Hours, a collection of prayers, a calendar of saints, masses, and also passages from the Gospels and the Psalms. On the other hand, extremely thorough research and analysis has allowed us to identify the patrons, each of noble lineages, thanks to the illuminations. Even if they were royal, they did not necessarily put their names on display. The first manuscript up for sale could be identified thanks to the coat of arms—which belongs to a branch of the House of Savoy, that of Savoy-Raconis—as well as by the presence of the coat of arms of Jeanne de Pontevès. After Jeanne's death in 1555, the book changed hands, coming into the possession of Louise de Laval (there is a note inscribed on the back of folio 13), and then it passed, through marriage, to the House of Castellane, its present owners. The expertise work on the 209-leaf book has thus established that it has remained in the family of the Marquis de Lagoy since its composition around 1520. This princely manuscript is estimated at €50,000/80,000.

In true "miniature" format (11.3 x 8.3 x 4.9 cm/4.4 x 3.2 x 1.92 in), the second 449-page work for sale was probably produced in Flanders for a patron of the Doulcet family, identified by its coat of arms. The dating of the manuscript, the last third of the 15th century, suggests that it belonged to Guillaume I Doulcet de Pontécoulant or to his son Guillaume II (est. €30,000/40,000). The English influence is perceptible in the choice of the saints commemorated and represented: St. George, the patron saint of the kingdom of Great Britain, Erkenwald, the Bishop of London, Edward the Confessor, the canonized King of England, and others, such as Thomas of Canterbury and John of Beverly.

The presence of the coats of arms of a couple represented in prayer at the feet of the Virgin has made it possible to identify in the third manuscript (198 leaves), from the region of Cambrai, Jean Antoine de Mahieu, Lord of Bosqueau born around 1460, and his wife Jacqueline de Sivry, Lady of Buath. The celebration of Saint Wilgeforte, a bearded crucified woman, under the Dutch name of "Ontkommer" reinforces the Flemish origin of the work, dated c. 1475-1480 and priced at €10,000/15,000.

London in Flames
Books of Hours were meant to be practical works, so the presence of painted images enabled the reader to easily navigate. The illuminations and imagery were very popular in the Middle Ages. Ever since experts have been scrutinized these books in search of the smallest details to provide information to the wider public. The notes in the sales catalog list the subject of the illuminations for each book. Their quality, the richness of the details and the precision of execution make these works exceptional. Concerning our manuscripts: "The stylistic singularity of each of artwork suggests the importance of the workshops which reflects respective prestige the patrons", reminds Ludovic Miran.

No less than sixty-two miniatures make up the illustrations in the prayer book of Guillaume Doulcet de Pontécoulant. A rare image of Erckenwald atop a belfry, protecting his relics during a major fire in London in 1087, which destroyed St. Paul's Cathedral, is eye-catching. Numerous historiated and gilded lettering contribute to the beauty of the work. The style of the miniatures is characteristic of the manuscripts produced by the Flemish workshops of the last third of the 15th century, some of whose production was destined for Anglo-Norman patrons.

Chimeras and Wild Strawberries
The finesse of the treatment of the figures as well as the richness of the palette characterizes the twelve full-page miniatures in the Book of Hours of Prince Antoine of Savoy-Raconis and Jeanne de Pontevès. Here again, we note the recurrent presence of elegant plant garlands. The historiated lettering in the second section of the manuscript guided the experts to Italy and its famous Ferrarese and Florentine workshops, working in particular for the Dukes of Este in the first third of the 16th century. In addition to the patrons, who are depicted praying at the feet of the Virgin, the Book of Hours of Jean de Mahieu and Jacqueline de Sivry includes twenty-one full-page miniatures (10.7 x 6.2 cm/4.2 x 2.44 in) and a wealth of different compositions.

These are characterized by a great variety of plant species: poppies, thistles, pansies, roses, strawberries and red berries alternate with acanthus scrolls. These pastoral motifs are punctuated by chimerical figures with, at the beginning of the Hours of the Virgin, a dragon with a human face whose tail ends in the head of a woman wearing a pointed cap, a "probable allusion to the fight against carnal temptations", as the catalog notes. The stylistic elements, including the highly decorative work of the ornate initials, could be compared, according to the experts, with the Brussels manuscript (KBR, ms. IV 145) produced in Bruges around 1470 in the workshop of Willem Vrelant.

Ornate Lettering, Historiated Lettering
One of the many particularities of the Book of Hours is the use of images to illustrate the often austere writing. Never far from the miniatures, the initials of a larger size and a different color than the other characters, offer an infinite number of possibilities for the illumination. Just like the illustrations, they function as a signal helping the reader find his/her way through the text. In the Book of Hours of Antoine de Savoie-Raconis and Jeanne de Pontevès, the illuminations begin the main sections of the Office; in the Book of Hours of Guillaume Doulcet de Pontécoulant, they introduce the main prayers. These "special" characters also have an ornamental function. Here again, their size and their decorative richness serve to organize the text. The historiated letter is more unique. This one is associated with an image by introducing a figurative narration within its drawing, which thus illustrates the text. Thus, on folio 168r of the Book of Hours of Antoine de Savoie-Raconis and Jeanne de Pontevès, the initial "D" of the hour of Prime depicts Pontius Pilate, dressed in scarlet, washing his hands in front of Christ, whose hands are tied, wearing a robe of derision.
15th and 16th century Books of Hours from the Marquis de Lagoy's Library, Ancient Books from the 16th to the 18th century; Manuscripts, Drawings & Autograph Letters; Curiosa, Modern Illustrated, First Editions
Salle 6 - Hôtel Drouot - 75009
Kâ-Mondo
Info and sales conditions
Catalogue