Wang Keping, a founder of the “Stars” group in China, has never enjoyed being inside—not even in his two studios, which are wide-open to the outdoors. 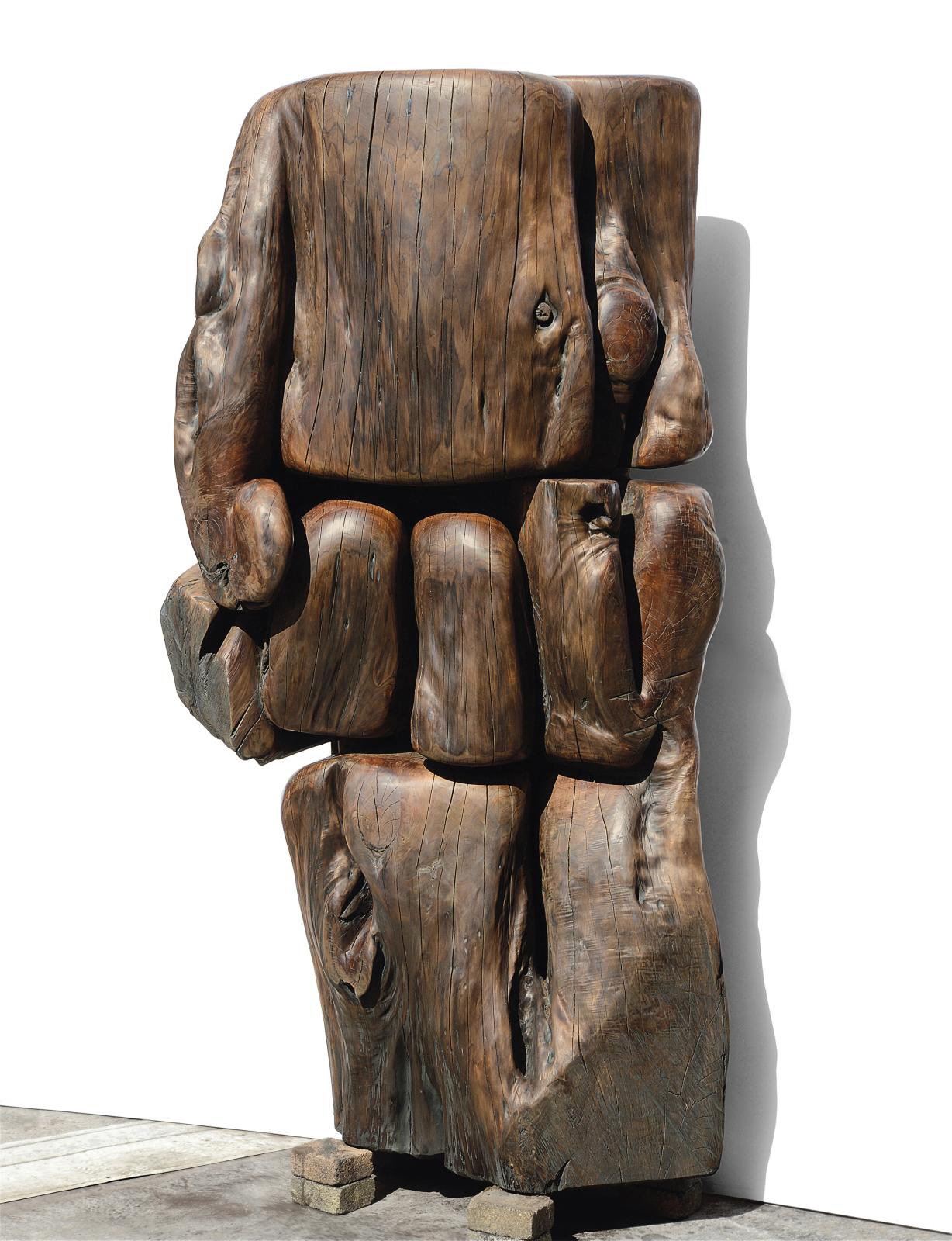 In September 2020, between the first and second lockdown in France, Wang Keping unveiled an immense, 4.2-meter-high (13.78 feet) work at the Domaine des Étangs in Massignac, Charente, where it was made a permanent feature of its Outdoor Art Trail a month ago. He carved it from an American red oak near the end of its life, located on the grounds, reflecting the immense respect he has always had towards nature. Born near Beijing in 1949, Wang Keping had already installed monumental pieces outdoors, notably in 1999 for “Les Champs de la Sculpture” on the Champs-Élysées in Paris and in 2016 at the Domaine de Chaumont-sur-Loire. But Massignac was the first time he created a commissioned work and chose a tree on-site instead of from a sawmill. This was almost paradoxical for an artist who has always worked in a studio. Now he has two: one in the Paris suburb of Vitry-sur-Seine, the other in the Vendée on the Atlantic coast.

The Vitry-sur-Seine studio is atypical to say the least: except for a 15-square-meter (161.4 sq ft) room used when it is too cold outside, the workspace is in the backyard of a rather humdrum suburban tract house far enough from the neighbors that the noise does not disturb them. The indoor studio is so crammed with chisels, gouges and mallets, which he often modifies or makes to suit his needs, that there are only four square meters (43 sq ft) of free space. This configuration led him to buy the studio in 2006 after occupying several others since arriving in France in 1984. The first, which Jack Lang, the French Minister of Culture at the time, set aside for him, was in Aubervilliers, on the outskirts of Paris. In 1995, he left it for a space in Goussainville before obtaining a studio from the City of Paris in the 18th arrondissement in 2002. Wang Keping loves the Vitry studio because it is where he can do what he calls his “seasonal work”. The space is laid out in four different areas corresponding to the four seasons, which set the pace for his creative process. He starts working in a type of hangar. “I always work with fresh wood because afterward, it gets too hard,” he says. He collects wood in winter at pruning and cutting time and starts stripping off the bark. “If I leave it on,” he says, “it rots because mushrooms grow and the wood will crack in a way that doesn’t suit me. I want to orient the cracks for the final drying.” Once the bark is off, the artist carefully inspects the wood to decide which shape inspires him. Then he draws on it with chalk and charcoal powder, which are easy to erase. The lines are not a drawing but a guide for the chainsaw. “Here, a branch reminds me of a penis [sic]; there, a curved part brought to mind a breast,” he says, adding that “I’m more interested in a part of a trunk, its intrinsic qualities, than the species.” Then Wang Keping trims the log and gives it a rough shape. He slashes a part that does not suit him to keep it from splitting elsewhere while it dries out.

After this stage, imposed by the life of the wood, he cuts about 10 pieces at the same time, which are stacked before being stored 65 feet away in a shed where they dry out for at least a year, sometimes much longer. This is where stage two takes place in the spring, when the artist chooses the previous year’s rough, seasoned cuts, inspects the natural evolution of the different species, which he knows like the back of his hand, and begins to painstakingly carve them with all his chisels, screwdrivers and gouges. This long, painstaking process gives the shape balance and harmony and brings out the details. He walks around his works, spends a lot of time looking at them, reflects and changes his mind. If he is not satisfied, he might leave them aside and go back to them two years later. When summer comes, he sands and burns them with a blowtorch, handling it like a paintbrush to shade the wood from white hues to the full range of his blacks. The next step is polishing to obtain the patina and shine so typical of his creations, which are displayed in his house, a place that is easily overlooked. But when Wang Keping does not go there, he likes to sleep in the studio, especially if the weather is nice or if he works late. In a large room next to the living room, finished sculptures await the master’s final approval before leaving for exhibitions. They feature his trademark themes: female figures, embracing couples and birds. But since he never considers his works really finished, they can be touched up. Sometimes he even modifies works that collectors bring him for restoration because he thinks he can improve them.

The artist usually spends summer and autumn at his Vendée studio, which he bought in 2019. The 800-square-meter (8,611 sq ft) building opposite the île de Ré, between La Tranche-sur-Mer and La Rochelle, once housed a shipyard and a locksmith’s shop on the adjoining property. All this space was a godsend for the artist, who says there is “never enough”. Unlike Vitry-sur-Seine, where he mainly works indoors because the twenty-two-foot-high ceilings allow trucks delivering logs weighing several tons to enter. There are huge hoists that enabled him to make the eight large sculptures currently at Galerie Nathalie Obadia. But Wang Keping does not feel imprisoned: he always leaves the doors and windows wide open. In 1979, he founded the “Stars” group with Huang Rui, Ma Desheng and Ai Weiwei, to whom he is still close - and who, at the age of 30, can be seen in a now-famous photo, holding up a sign at an important demonstration. In May, five large sculptures will be on display at the Musée Rodin, where an open studio will be in the garden. The idea of working outdoors is undoubtedly a sign of freedom.

Fine Arts Paris: An Assortment of Specialties
Newsfeed
See all news
We Are on Break for Our Annual Summer Hiatus - Back in August! Happy Summer
A Michelin Star for the Museum of Modern Art in Fontevraud
World Record for the French-Danish Painter Gerda Wegener
Canadian Indigenous Groups Ask Vatican to Return Cultural Artifacts
Not to be missed
Artist Studio

Wang Keping, a founder of the “Stars” group in China, has never enjoyed...