For more than half a century, Anne and Patrick Poirier have been emblematic figures of international contemporary art. In Lourmarin, in the Luberon France, this inseparable duo prepares their future exhibitions in a workshop-laboratory that mirrors their work. 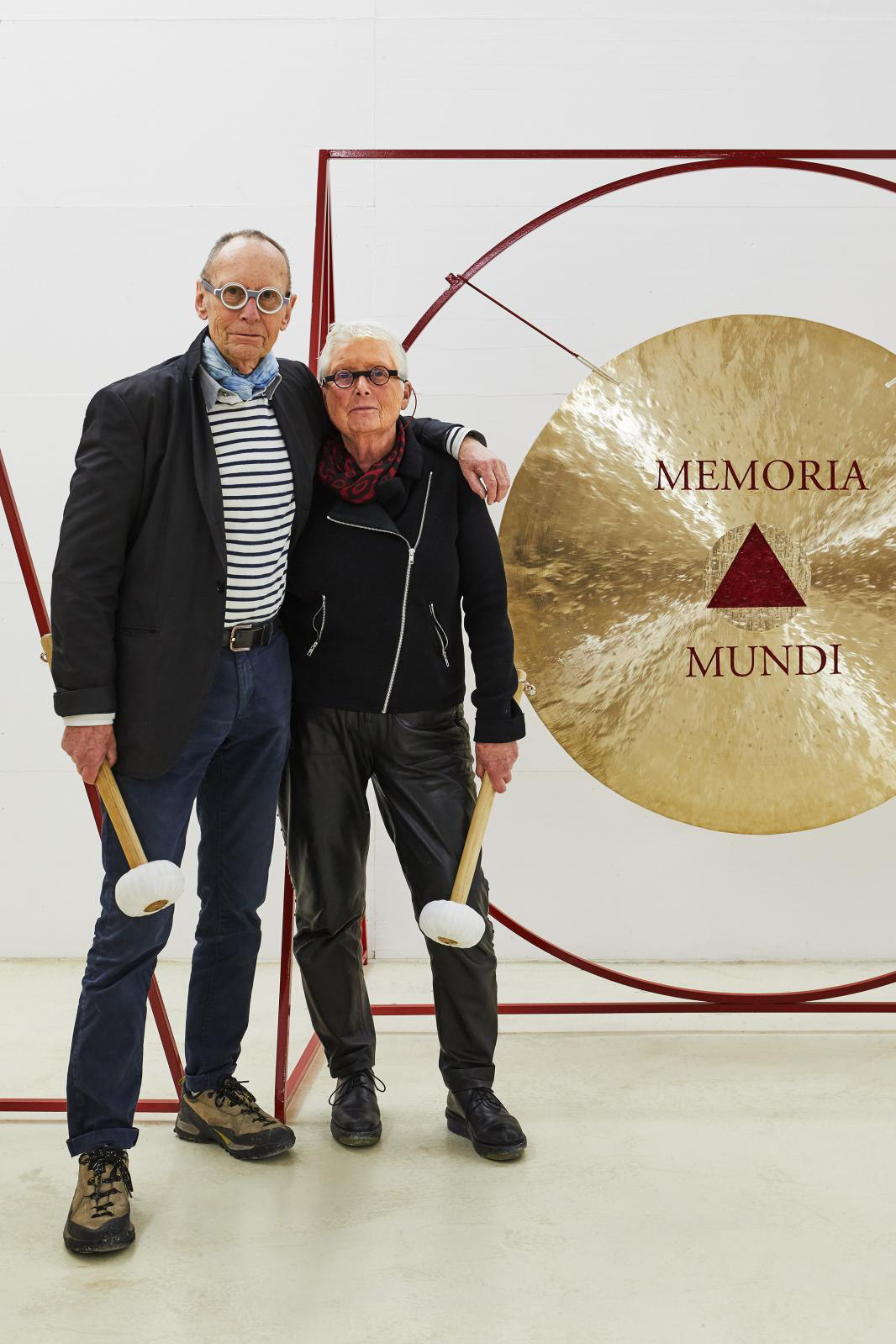 In 2004, two years after the death of their only son, Alain-Guillaume, Anne and Patrick Poirier moved to their family home in Provence, where they set up a laboratory for creation. Known for their work on the fragile history of ancient civilizations, memory and oblivion, the tireless travelers, born in Marseille in 1941 and Nantes in 1942, respectively, lived abroad for many years. They have been inseparable since meeting at the Paris school for decorative arts in the 1960s. "We’re in the first generation of artist couples along with photographers Bernd and Hilla Becher and visual artists Gilbert & George, among others,” they say. “We’ve been working together for 43 years." Downhill from the nature-encircled building, their studio, partly lit by natural light, looks like a research lab full of so many "treasures", attesting to countless explorations, that the eye does not know which way to look. "The 18-meter-high space spreading out over 200 square meters still reflects our busy 2021 period, when we had shows at Château La Coste, Thoronet Abbey, the Le Muy estate in the Var and the MRAC Occitanie in Sérignan". On the back wall, a drawing of their son seems to watch over his parents’ work like an angel of peace. Models of unfinished projects arranged on shelves or being finalized on tables, annotated drawings, miniature figurines, Gorgon masks, shipping crates and a thousand other fascinating objects fill the space in a cleverly organized jumble.

A Protean Body of Work in a Variety of Media
The creative process usually starts with sharing thoughts. "Patrick is full of ideas,” says Ms. Poirier. “He tells me about them in the morning and we think about them together. He goes into the studio and I join him in the afternoon and also work at night. We can meddle in each other’s work. We share everything and often can’t tell who did what." A long, white architectural model stands on a trestle table near a stack of books and small jars of paint. "This abandoned project called for a staircase leading to a triangular room, within a heavily wooded area in Burma," Mr. Poirier explains. "Here, these models of leaning towers are early studies for an exhibition in 1979, at the Philadelphia College of Art." Small and large, they are stored all over the studio, attesting to the couple’s interest in architecture, ideas of scale and space and onsite interventions. "In 1969,” he continues, “we had to renew our passports and state our profession. Anne chose architect and I decided on archeologist, which let us visit archeological sites that were closed to the public at the time, like Nero’s Domus Aurea in Rome in 1990." The Poiriers—archeologists, architects, ethnologists, sculptors and "amateur" photographers with interchangeable roles—have always used an array of media. For example, delicate impressions of Latin inscriptions on Japanese paper collected from numerous ancient buildings lie in boxes on the floor like delicate skins preserving the stone’s memory. They were made using the wet paper technique at the necropolis of Ostia Antica in 1970-1971. On other sheets of paper with saturated colors, sentences written in a bold script catch the eye. "Monday, September 6, 2021, 11:35. Ulysses had the feeling of having lived by successive accidents," it says on a copy of Journal d'Ulysse, a fictional document composed of a dried plant pasted on Japanese paper and accompanied by writings. They unrolled large drawings on an imposing wooden support. "During the lockdown, we rediscovered the joy of drawing by creating ‘Grand Hôtel Dante: Purgatory’, a series of monumental color drawings based on The Divine Comedy. In fact, the shifting tones of nature and of light in the Luberon is what inspired us to introduce color into our work." A large black chamber sits on a metal tripod in a corner of the studio. "We use photography to gather information and attest to the violence of history on all the continents,” says Ms. Poirier. “We bought this camera in Los Angeles, where we lived for a year because Patrick was fascinated by writer and poet Victor Segalen, who used one of the same kind, only bigger, in China." Their silver prints highlighted with aniline colors often have a dreamlike dimension. The project for Anne’s Académie Française sword—she was elected to the sculpture section on June 23, 2021—is waiting on a table. "The academy elected me to make up for the blatant unfairness of having an overwhelming majority of male members," she says. Her sword is symbolic: the pommel will feature a self-portrait of the couple in the two faces of a silver Janus as well as a blackened silver column. The hilt, also in silver, will feature a drawing of a brain and an engraved portrait of their son. Most of the mirror-polished steel blade will be double-edged.

Want to receive news and updates about auctions?
Sign up to our newsletter

Anima mundi in White, Black and Ruins
The brain and its convolutions, the double self-portrait, the cosmos, the cross, writing and ruins are among the recurring themes that can be seen in the fusional couple’s laboratory. Both are haunted by wartime memories. "Patrick lost his father in an air raid when he was a year old and my mother lost hers at the age of seven,” says Ms. Poirier. “During the Second World War this all created painful memories, which I struggled to understand as a child. Our ruin is neither nostalgic nor romantic. It expresses the fragility of things in the process of disappearing, like certain animal species, plants and languages. It suggests fragments and loss, but also the preservation of memory, of what came before us. Our models of ruins are black because they tell of destruction and chaos. Conversely, some of the utopian architecture is white because it represents an ideal world of ideas." The Poiriers are putting the finishing touches on their upcoming shows in Germany, Italy and France, including an exhibition in the square Victor-Schoelcher in La Roche-sur-Yon (Vendée). Under the leadership of art historian Laure Martin-Poulet, who has written a monograph about the couple (Flammarion, 2017), it will take the form of a photographic herbarium on the fragility of peace and memory, the violence of war, ruined cities and hatred, which are incomprehensible in this spring of 2022. Supported by the galérie Mitterrand in Paris, the 1967 double Prix de Rome winners are always alert and sensitive to the world's turmoil. Long shunned in France but collected around the world, they tirelessly probe our world’s battered soul through all its interstices.

In Paris, the Mallorcan painter puts the finishing touches to his...