The Ethical Aesthetics of William Amor

William Amor turns waste into floral compositions with positive, responsible and appealing messages. We visited him at his “Créations Messagères” studio. 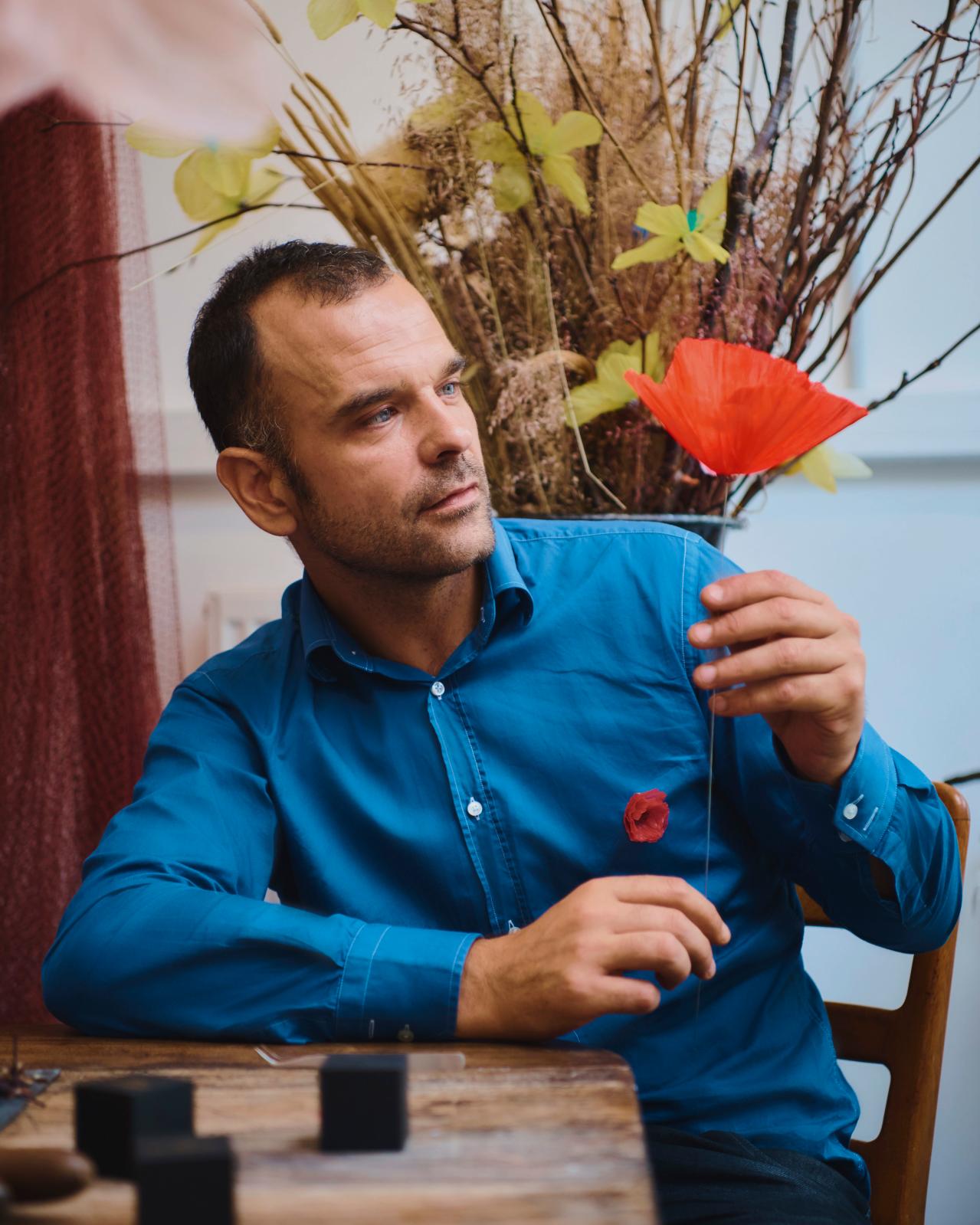 William Amor, who “ennobles neglected materials”, welcomed us to the second floor of a rehabilitated former power station in the 10th arrondissement of Paris opposite lush green buildings bathed in light flowing in through large windows. His studio is a haven of peace full of colourful materials and busy hands. "Marion is my workshop manager, with whom I’ve been working for the past two years,” he says. “Marceline, from the Ateliers du Moulin, is an apprentice. She’s part of the small team I call the Little Golden Hands. A few weeks ago, 14 of us were here working on our latest project!" Tables lined up in a row divide the space down in the middle. A wide bay window at the back overlooks the neighbourhood wisteria and flowers, while dainty petals and ropes cascade down from the ceiling. Treasure chests of all sizes and colours, bouquets of flowers, books and old tools are on shelves lining the side walls.

“People bring me plastic waste, or I gather it myself wherever I can, and I turn it into sculptural pieces based on living things,” says William Amor, who was enthralled by nature at a very early age. Growing up in the countryside in the 1980s, he collected flowers and plants, whose classifications he knew by heart, and dreamed of becoming a botanist to create his own species. “When you observe the flawless functioning and aesthetics of plants," he says, "you realise how insignificant you are." After earning a degree in genetic biology, William Amor came to Paris in 2007, still seeking his way. He worked as a landscaper, a salesman and an artists' agent while making artificial flowers in the privacy of his small Parisian flat. "My collection of 250 natural orchids couldn't stand the lack of light," he says. "At first, I didn't like artificial flowers, which I found quite tacky. But then one day it dawned on me that the texture of the plastic bags I got from the shops oddly reminded me of flower petals. My opinion changed. I did some research on recycling and became interested in upcycling, to which I wanted to apply a craft-based process.”

The Ethical Aesthetics of Nature
Besides folding plastic to make flamboyant poppies, delicate roses and peonies, he turns bottles into little sequins or petals that almost look like glass. Waste materials, often mixed with preserved plants picked in forests or elsewhere, become contemporary odes to the aesthetics of nature. His latest find is cigarette butt filters. Washed, treated and coloured, they become mimosa pom-poms that look more lifelike than the real thing. Rope fibres and fishing nets washed up on beaches turn into hanging plants, stamens or pistils, coffee capsules into stems and so on. "We work with acid-free oil pigments and have used the same dye baths since 2017 to obtain our various pastel shades," he says. Waste not want not could be his motto. Beyond their environmental connotations and terminology playfully recalling botanical nomenclature—Clematis petroliferus, Cornus stellata petrochimica—his creations turn the materials’ history topsy-turvy and "break with value judgements”. Where does plastic come from? Oil, a fossil fuel that took billions of years to build up and, when it runs out, will be worth as much as gold, diamonds, silk, etc. The estimated value of the materials he uses does not matter to William Amor. To him they are precious. His gesture and talent in shaping these meticulous works make them so.

Industry Recognition
William Amor’s philosophy, and the aesthetics and fables of his "messenger creations", appeal to many luxury houses, galleries and institutions. The self-taught artist was a resident at the Ateliers de Paris between 2017 and 2019, when he became a laureate of the EY Foundation, the Banque Populaire Foundation and the Grand Prix de la Création de la Ville de Paris. That same year, he created "For a More Beautiful World", a field of 200 giant poppies in the Palais Brongniart in Paris for Kenzo. His latest commissions in 2020 were "Bloom of Rose", a floral display for Guerlain's windows on the Champs-Elysées and rue Saint Honoré, and a limited edition of exceptional decorations for the perfume "Mon Guerlain, Bloom of Rose" in collaboration with Baccarat.

Turning Plastic into Jewelry for Solidarity
William Amor’s skills are not confined to creating pieces in an ecological vein. Since 2018, he has trained people with disabilities at the Ateliers du Moulin of the Fondation Franco-Britannique de Sillery. “Every Tuesday, I teach four to six people how to make ‘messenger creations’. Eventually, I hope to create a ‘small messenger house’ offering permanent jobs that will restore the confidence of people on the margins of society.”

Opening: South Korean Artist Lee Ufan in Arles
Newsfeed
See all news
We Are on Break for Our Annual Summer Hiatus - Back in August! Happy Summer
A Michelin Star for the Museum of Modern Art in Fontevraud
World Record for the French-Danish Painter Gerda Wegener
Canadian Indigenous Groups Ask Vatican to Return Cultural Artifacts
Not to be missed
Analyses