The Discreet Charm of the Maharajah

After the sale of part of Yeshwant Rao Holkar II's furniture in 1980, Manik Bagh, the palace he built in Indore in 1930, became a legend. In Paris, Raphaëlle Billé and Louise Curtis have curated an exhibition on one of the last great inter-war patrons: "Moderne Maharajah". 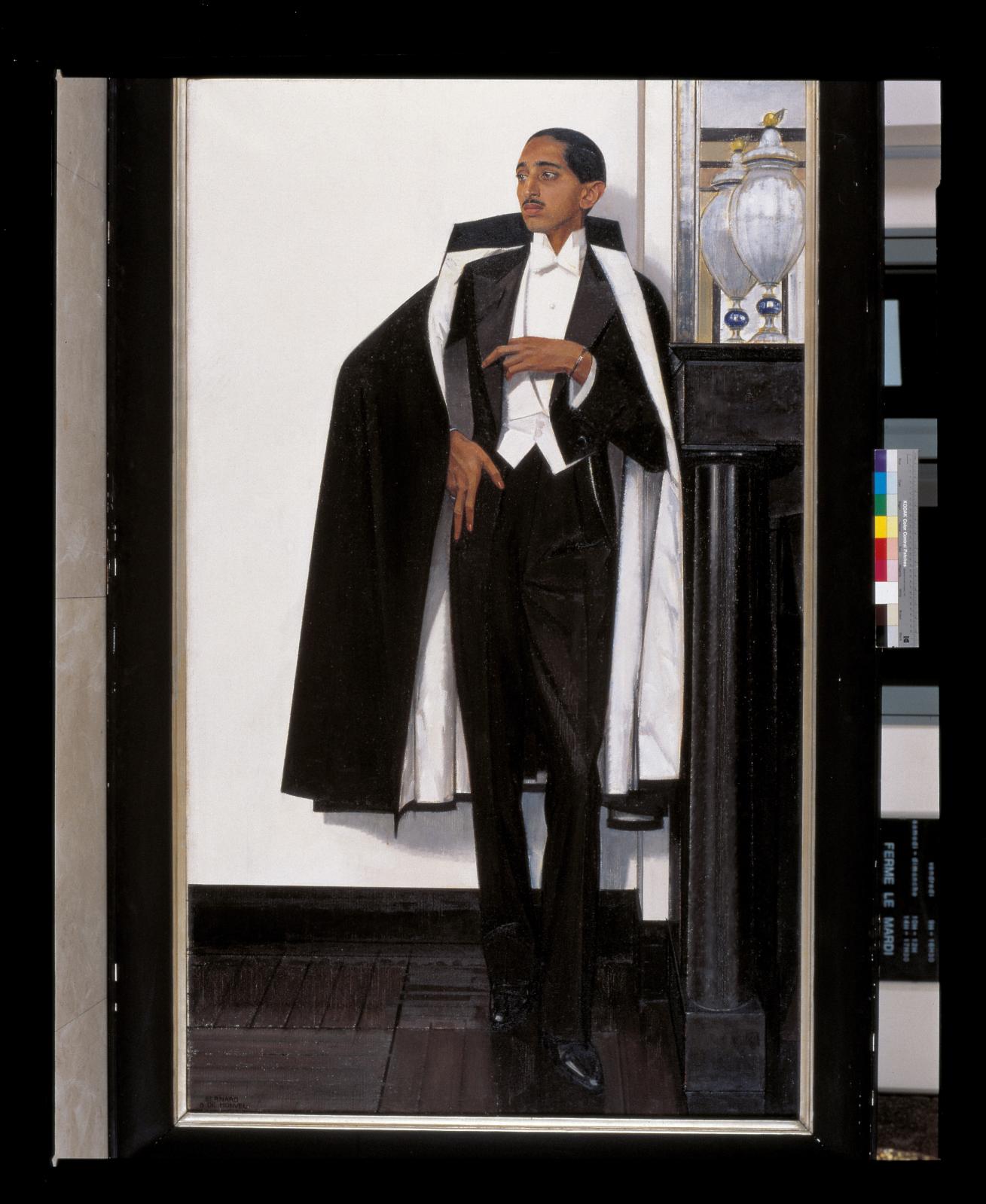 Merry, elegant, mischievous and enigmatic, the young couple adopt poses that break completely with traditional portraits. Man Ray, who had already celebrated the mysterious charms of modernity with Charles and Marie-Laure de Noailles at their house in Hyères, immortalised the new modern couple who had subjugated Paris, New York and finally Hollywood: the Maharajah and Maharanee of Indore. Bernard Boutet de Monvel painted them in Western clothing – him in a suit, her in an evening gown – and the New York smart set flocked to the Wildenstein gallery to admire two new portraits of them in Eastern garb. The prince came to know Boutet de Monvel and Man Ray through the collector, aesthete and writer Henri-Pierre Roché, whom he met at Oxford. Introduced to Brancusi (again by the author of Jules et Jim), the prince bought his three "Birds in Space" in bronze, black marble and white marble, with the idea of building a temple to contain them. It was also through Roché that the prince was introduced in 1929 to the couturier Jacques Doucet in his Neuilly studio (furnished by trailblazing designers of the time, Eileen Gray, Pierre Legrain and Marcel Coard), where he discovered Picasso, Matisse, Chirico, Brancusi and Picabia. He wrote to Doucet afterwards, "The two hours I spent in your studio were some of my best moments in Paris. They made an extraordinary impression, which I carry around jealously and will remain with me for a long time."

Luxury and Modernism
The fact that the couple decided to build and furnish a "modern palace" in India galvanised the art world, because modernity was involved: fashions were changing, and commissions were few and far between. At the 1929 Salon des Artistes Décorateurs Jacques-Émile Ruhlmann was quick to exhibit a stand dedicated to "a crown prince of a Viceroy of India." The following year, Louis Sognot and Charlotte Alix presented "a lounge for a colonial residence". Commissions followed. The Maharajah visited other salons in Paris (Automne, UAM) and Berlin (Deutsche Bauausstellung), home to the architect Eckart Muthesius, another Oxford acquaintance, whom he asked to oversee his project. The son of Hermann Muthesius, Eckart introduced the Arts & Crafts tradition to Germany and founded the Werkbund. The preparatory sketches for the palace published in the 1929 press initially showed an "Art Deco" building that would have sat well on Miami Beach. Then the project became more refined and radical. Published in 1933, the "fairy-tale Indian palace" looked astonishingly bold, with pure, bare façades: huge concrete parallelepipeds topped with a terrace. The reality was rather different. Muthesius, like Le Corbusier, could not resist touching up his photographs to promote the legend of an above-ground, abstract, international architecture. The palace's four pediments were erased, and the picturesque section of tiled roofs supported by wooden frames was masked. Far from being in concrete, the walls were made of bricks, which were carried to the building site by local people on their heads. With air conditioning, electric heating, indirect lighting and telephone, the modernism of the palace was purely technical, like the train, plane and caravan that immediately followed.

Functional, Colorful Spaces
Muthesius was only given a free hand with the interior design. While the desks, seating, shelves and bookcases had a heavy post-Bauhaus feel, he seemed more at ease with metal and glass: shelf brackets, a table with a top in alpaca and a "mobile electrified dressing table" illustrated a virtuosity that reached its peak in the lamps, which were positive sculptures. Most of the other furnishings were by French artists or firms, with Roché acting as middleman. Ruhlmann and above all Sognot and Alix provided the furniture; tableware was supplied by Jean Puiforcat and Jean Luce, and Desny designed other objects and lights. Not to mention several icons of the moment, for chaises longues by Eileen Gray, Renée Herbst and the Le Corbusier-Jeanneret-Perriand trio also entered the palace. Despite Henry-Pierre Roché's efforts, and apart from Man Ray, Brancusi and Cournault, the prince was not tempted by the artistic avant-garde he glimpsed at Doucet's studio. At Manik Bagh, modernity was expressed in the layout of the space rather than art works. The furniture items were staged by Muthesius according to a carefully designed geometric plan. The colours of the rugs by Ivan Da Silva Bruhns, the seating fabrics and the wall paint all echoed each other, and were interspersed with areas of light based on the ranges of blues and silver, golds and ochres chosen by the prince. This is where Muthesius's lamps came into their own as sculptures, giving focus to the space. To make the walls sparkle, the painter Ernst Messerschmidt incorporated powdered glass and metal into the paint, which was sprayed on. The subtleties are lost in the architect's black-and-white photos, but visible in Robert Descharnes' 1970 colour report, which features in the Musée des Arts Décoratifs catalogue.
The modern Maharajah's project was meant to be completed by the construction in his garden of the Temple of Contemplation, also called the "Temple of Love or Liberation", to house Brancusi's birds. As Roché recalled: "He also planned to build a temple by Brancusi for them, measuring twelve by twelve strides, on the lawn near his palace, with an underground entrance but no doors or windows: a temple for meditating." The play of light, reflections in a pool and a wall fresco would have set off the three sculptures laid out "like spirits in the temple", accompanied by a more primitivist work in wood, "Spirit of Buddha" (1937-1938). Brancusi visited Indore in 1938, but with the Maharanee's death the project was changed to a mausoleum, which never came about in the end. After the war, the prince returned to Paris: "Twenty-five years after his first visit, the maharajah came back to look at the model of the still-born temple with Brancusi, and they sat with their knees to one side, like the first time, and they didn't speak."

Raphael “The Universal Artist” at The National Gallery, London
Newsfeed
See all news
Moulin Rouge Windmill in Paris Becomes Airbnb Rental to Celebrate its 133rd Birthday
China: Discovery of the Oldest Portrait of Confucius
A “Pop District” is Coming to Pittsburgh
The Met Collaborates with World Monuments Fund for New Digital Resource
Not to be missed
Analyses