The Bourse de Commerce: From the "Queen's Mansion" to a Contemporary Art Museum

Initially scheduled for January 23, the opening of the Pinault collection's new flagship museum in the former Paris Bourse de Commerce building had been delayed by the lockdown. We examined the architecture of this structure rooted in history. 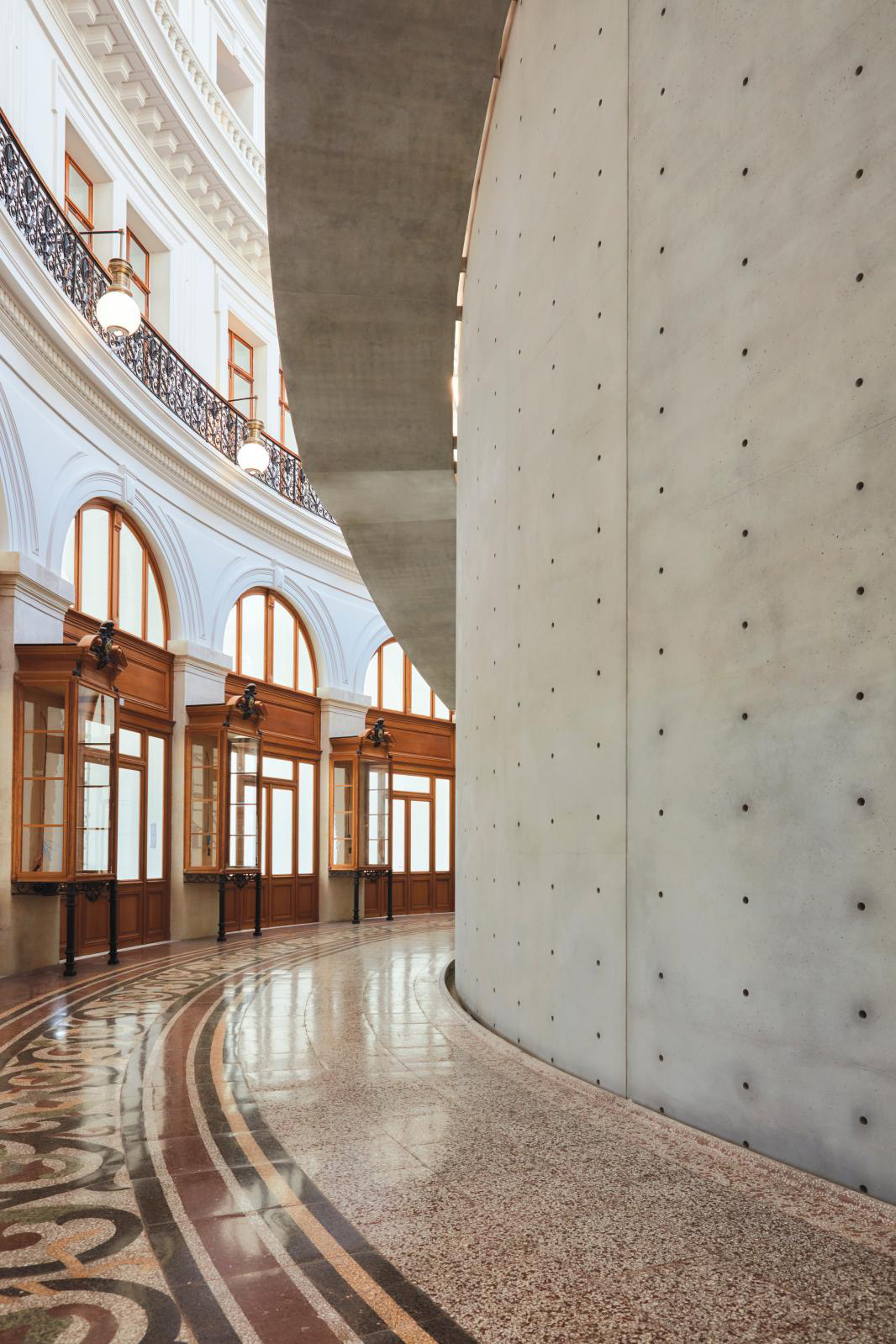 The Bourse de Commerce—the former commodities exchange—is a Roman-style incongruity situated in the heart of Paris between the Louvre and Les Halles, with a history closely entwined with that of the French royal family and a strategic district. Its five-year restoration has preserved the feel of the monument to a remarkable degree. While using his vocabulary of gray tones bathed in zenithal lighting, architect Tadao Ando has proved his talent for inserting ambitious architecture into an existing envelope. "Rather like a Russian doll," as he says, he has fitted a concrete cylinder 98.4 feet in diameter and 29.5 feet high inside the building, lowering its rotunda so that the gaze can move around freely. Visible from every angle, the glass vault is encircled by a restored and freshly-cleaned panorama depicting trades in the continents.

All around, the 19th-century shop windows of the Voillereau company, placed between the twenty-four arcades of the inner façade, host an initial installation. A 284-seat modular auditorium in the basement will be used for lectures, performances and dance shows. A total of ten exhibition spaces will enable a permanent rotation, unlike the Venice sites where activity is still seasonal. Director Martin Béthenod talks of "fifteen projects a year" in a venue described by Jean-Jacques Aillagon, director of the Pinault Collection, as "a setting for creation and a mirror of the world". The complex is overlooked by a restaurant with a view of the Paris rooftops, designed by the Bouroullec brothers and run by Michel Bras.

The project has involved studies on the history of the site and the original suppliers of materials: cast iron by Le Creusot, floor tiles by Fourcade of Perpignan, the stained-glass slabs and so on. Images provided by drone and laser surveys enabled the modeling of the framework. As well as the marble mosaics, wrought ironwork and cast-iron pillars, the most visible sign of this archaeological immersion consists of two lumbering pneumatic air refrigerators, invented by Victor Popp, removed from a room cluttered with rubble and restored with help from the Arts et Métiers and the Museum of Industry of Alsace. The glass roof has been equipped with double glazing to make this huge space a "thermal airlock".

Aristocratic Antecedents
The history of the site began when Jean II de Clermont-Nesle built a mansion that was later given by French King Louis IX (r. 1226-1270) to his mother, Blanche of Castile. It bore a series of names that changed with the various owners' noble titles: Hôtel de Nesle, Hôtel d'Orléans, Hôtel de Bohême and Hôtel de Soissons. In 1498, part of the property was taken over by the Augustinian nuns and used as a convent for "reformed girls" in Paris.

In 1572, having decided to leave the Tuileries Palace, Catherine de Medici bought the Hôtel d'Albret to build a palace with a park, integrating the adjacent properties, and asked the nuns to carry out their work nearby on Rue Saint-Denis. This project occupied architect Jean Bullant (1515-1578) for the last six years of his life. The architect built a tower with 147 steps, accessible from the queen's residence, which her Florentine astrologer Cosimo Ruggieri could climb to look at the stars. But its function has never really been clarified.

The Queen's Tower
This icon, now connected to the Bourse de Commerce, has miraculously survived the capital's various vicissitudes. In 1748, the 98.4-foot high column was one of the first-ever heritage monuments to be saved when the writer Louis Petit de Bachaumont bought it to save it from destruction, before giving it to the provost of Paris. It was classified in 1862 (for its part, the Bourse de Commerce had to wait until the threat of collapse in 1975, a few years after the shocking destruction of the Baltard pavilions.) In the 17th century, the historian Henri Sauval, author of a Chronique scandaleuse de Paris and a Traité des bordels (Scandalous Chronicle of Paris and a Treaty of the Brothels) compared the Medici Tower to Trajan's Column in the Forum, in Rome. Its limestone shaft is decorated with interlacing fleurs-de-lys, cornucopias and denticulation. In 1764, it acquired a sundial designed by the astronomer Alexandre Guy Pingré, which disappeared after being removed by the City of Paris in 1926. The idea of reinstating a copy has been ruled out because the masonry is too fragile.

Grain Exchange
In 1741, after its last occupant suffered under John Law's bankruptcy [following the implementation of Law's system during the regency of Philippe d'Orléans—Ed.], the "Queen's mansion" was demolished to build a grain exchange, accessible from the quays of the Seine. Its purpose was to stock flour for a city with over one-half a million inhabitants often afflicted by famine. Its construction in the 1760s was overseen by Nicolas Le Camus de Mézières (1721-1789), who designed a circular building on a pentagonal plot. As architect of the Monuments Historiques Pierre-Antoine Gatier points out, this direct reference to Roman architecture was in line with "a style commonly admired by the utopians of the Enlightenment".

The open courtyard was subsequently covered by a wooden dome, the achievement of André-Jacob Roubo, a carpenter inspired by the work of French architect Philibert Delorme to build a tangled mass of thousands of beams, with no pillars. In his Travels in France, Arthur Young (1741-1820) said he was dazzled by this "immense rotunda": "by far the most beautiful thing I have seen in Paris—so light you would think it had been hung there by fairies."

After it burned down, it was replaced in 1811 by a cast-iron structure covered with tin-plated copper: "the first structure ever made with this type of material, a founding symbol of the century of industry," to quote Pierre-Antoine Gatier. For this new feat, which took five years to complete, architect François Bélanger joined forces with an engineer, François Brunet, the city's Controller of Works. (His assistant, Jacques Ignace Hittorff, became an outstanding architect of the Second Empire.) In addition to Bélanger's drawings in the National Archives, researchers have been able to study a collection of 240 sheets in the Wallfraf-Richartz Museum in Cologne, whose delicate restoration François Pinault has assumed. In 1873, the grain exchange was closed and the architect Henri Blondel (1821-1897) commissioned to transform the structure into a commodities exchange, which opened in 1889 during the Universal Exhibition. Blondel had the building demolished, leaving only the inner circular arcade and an 18th-century double helix staircase, surmounted by the metal dome, over which he placed a glass roof. This was the version the new occupants decided to restore, with a new roof in slate, replacing the copper.

In his letters from Paris during the Consulate, published in French by the CNRS in 2016, the British journalist Francis William Blagdon (1778-1819) describes the "noble simplicity" of this exchange, with "granaries supported by Tuscan order pillars." He particularly admired the "dome 120 feet in diameter [nearly 40 meters], with a center 44 feet [some 15 meters] above the ground," which he compared with the Pantheon in Rome. The author tells us that its construction was "considered so dangerous that the entrepreneur could not find anyone brave enough to remove the supports, and had to do this himself." The workmen were "amazed at its stability once the supports had gone."

The Multifaceted Architecture of the Cité Internationale in Paris
Newsfeed
See all news
Is Battersea Power Station Now a Playground for the Super Rich?
Colorado Artists Unite to Advocate for Missing and Murdered Indigenous People
Tourist Denied A With Meeting Pope Francis Smashes 2 Antique Statues
Digital Illustrator, Grzegorz Rutkowski, is Bigger Than Picasso on AI Platforms
Not to be missed
Cultural Heritage