A set of three portfolios of projects that come directly from Pierre-François Fontaine’s library via his descendants attest to the two architects’ vision and show the changing urban fabric of Paris. 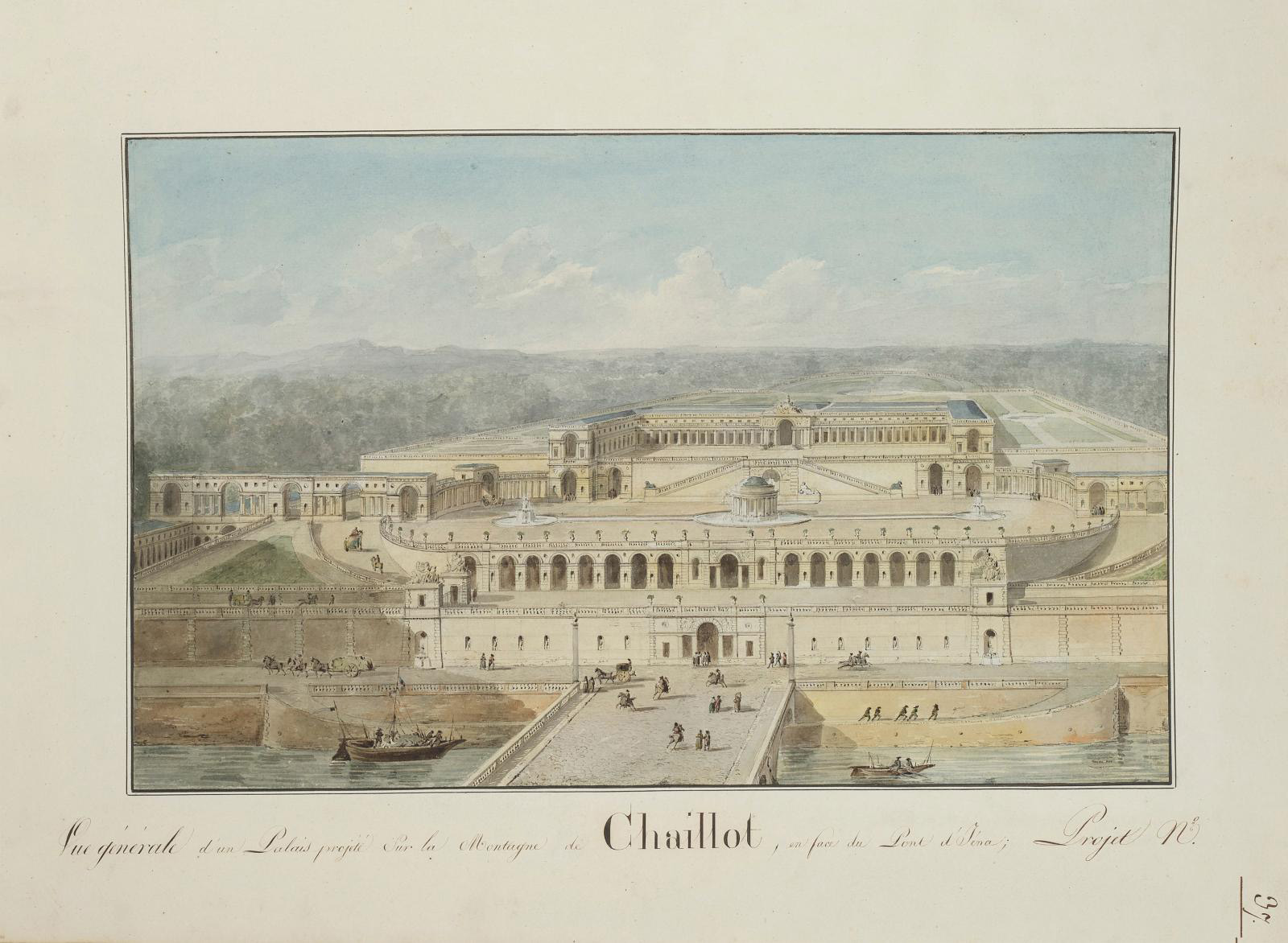 They are two sides of the same architectural coin: Charles Percier (1764–1838) and Pierre-François Fontaine (1762–1853) worked together to create a new style steeped in Egyptian, Greek and Roman antiquity. They wended their way through the demands of the Ancien Régime early in their career and those of the Consulate, the Empire, and the Restoration, accompanying changes in form without affecting substance. Fontaine’s Journal, begun in 1799, tracks his career. He was appointed government architect in January 1801, first architect to the Emperor in 1813 and worked on the regime’s first projects. He and Percier produced a number of watercolor plans, of which three large folio albums of original drawings are now up for sale. These exceptional documents are an immersion into the architectural ebullience of the early 19th century.

Historic Projects
The first project, intended for King Frederick I of Württemberg, who owed his crown to Napoleon and married his daughter Catherine to Jerome Bonaparte, is a lavish, delicate palace, the height of luxury and refinement, recalling in passing that the export of French taste at great expense is nothing new. The second is the pharaonic palace at the Porte Chaillot, where Fontaine’s patient hand can be discerned. He constantly proposed adaptations to Napoleon, who was convinced of architecture’s evocative power but often reluctant to pay for it. The design changed with the Emperor's victories and setbacks, testing the nerves of the architects, who struggled to keep up with their client’s sometimes contradictory demands. However, the countless variations make it possible—better than any other—to perceive the architects’ inventiveness and various stages of reflection. In parallel with Fontaine and Percier's journals, the watercolors can be dated between 1810 and 1812. There is no palace to compare the drawing to since it was never built.

Neither was the gigantic lighthouse at Terneuzen, a small Dutch port on the Ghent-Terneuzen canal that was to serve as an observation tower in the event of a British invasion. While Napoleon undoubtedly savored the prospect of such a building as much as the purpose it was to have, he also would have enjoyed staying there: The lighthouse was to have all the amenities. The Emperor's room, the reception rooms and the stables embody Napoleon’s antiphony on paper: usefulness over splendor, especially in a military context.

The New Paris
Meanwhile, the architects were busy changing the face of Paris. By means of competitions, the aim was to make the city’s street plan more rational. In the last collection’s projects, Fontaine found satisfaction in exercising his art in a language free from political constraints. For example, in the watercolors of Parc Monceau, the Paris toll barrier is set in a landscape that could have been the envy of Versailles. The proposals include a menagerie in an Anglo-Chinese style park dotted with follies and a grand canal adapted to mock sea battles at the Emperor’s request. It was Versailles in Paris.

Fountains were a centerpiece of these projects. The one at the Carrousel was to be located a stone’s throw from Fontaine and Percier’s arch, and another at Place de la Concorde was to be the junction between the new and the old Paris. The influence of the Italian Renaissance and Roman antiquity reflected the ambitions of the new political and social paradigm.
The architects put as much care into projects meeting citizens’ needs as they did into decorative ones. The authorities did not neglect the aesthetics of new cemeteries. In the four stormy-skied proposals offered here, expert Michel Saporta sees the strong influence of Boullée and Ledoux, which marked French architecture after 1780. Placed at each cardinal point of Paris, they were to be distinguished by spectacular spherical or pyramidal cenotaphs dominating the alleys. The grandiose monoliths would have induced the contemplation appropriate to such places.
The projects for the cafés at the Tuileries show a modern approach to urban planning at a time when the former royal estates had become public property. The Louvre’s gardens had to take new considerations into account and were redesigned to accommodate the leisure activities and needs of Parisians as a prelude to Haussmann’s destruction of the old urban fabric.

Loyal to classicism, Fontaine colored his statuary with a pinkish wash and skillfully shaded his cross-sections. His proposals are displays of skill intelligently combining his deep knowledge of 16th-century Italian architecture with an acute awareness of contemporary aspirations. The drawings feature a plethora of details and different pictorial, architectural and sociological points of view. A keen eye can see how luxury was represented in the early 19th century. Above all, these superb albums are an invitation to daydream, to stroll through landscapes where architecture alone is capable of building visions of an ideal grandeur.

Philippe Costamagna: Napoleon's World of Art
Not to be missed
Pre-sale