The Art of French Stained Glass

This stained-glass dome is executed in the purest French tradition by the France Vitrail International workshop, supervised by Éric Bonte, a master glassworker since 1979. 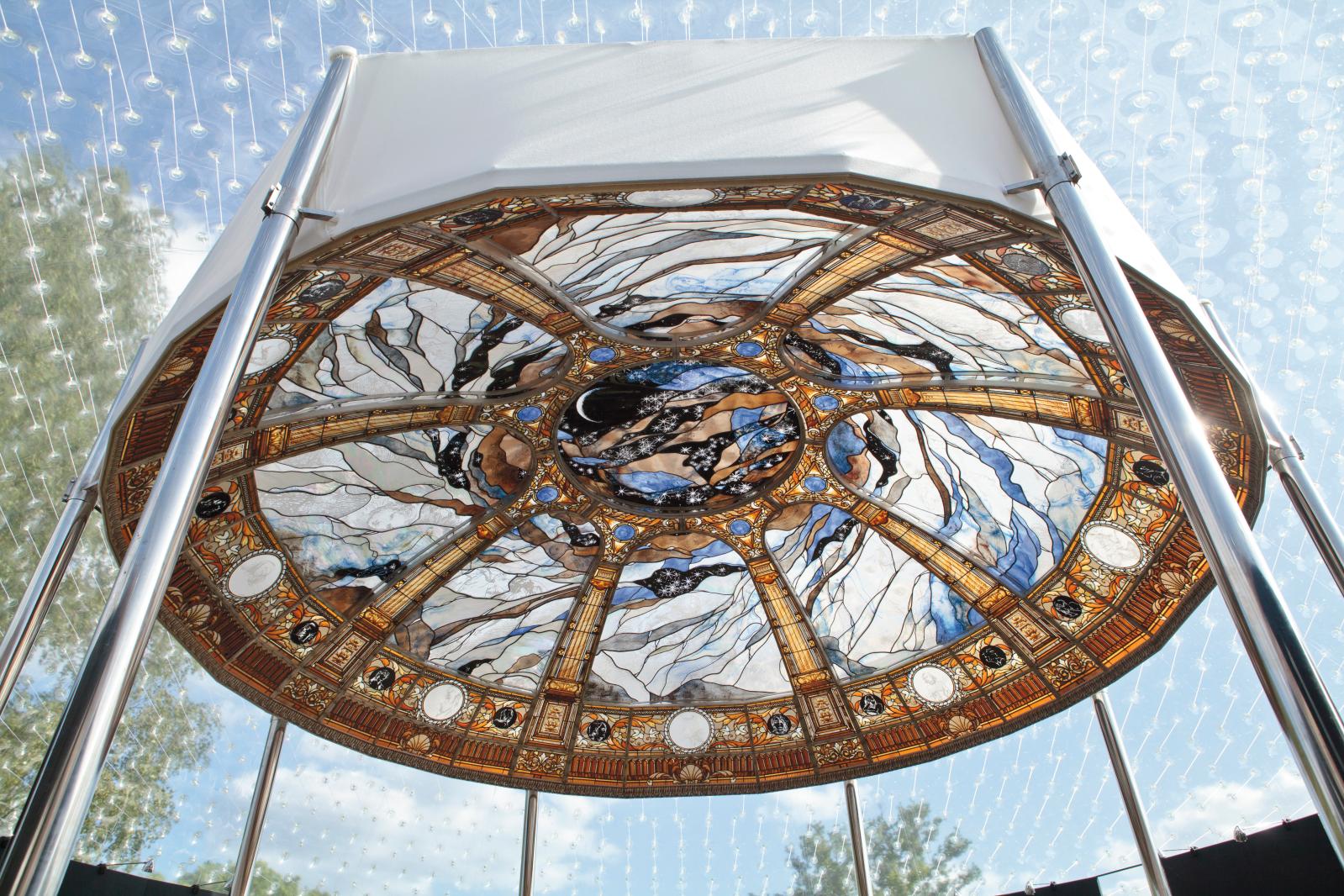 All the traditional skills of Eric Bonte, the head of France Vitrail International, come into play in this Allégorie de la nuit (Allegory of Night). Presented with two other Art Nouveau-style domes, Allégorie du printemps (Allegory of Spring: €120,000/220,000) and Or, cristal (Gold, Crystal: €120,000/130,000), this piece was exhibited at the Grand Palais during the 2019 Paris Biennale. The stained glass window, based on a design by Bonte entitled Rêves célestes (Heavenly Dreams), flirts with abstraction and features reclining bodies against a star-studded sky, a crescent moon and women's faces in blue monochrome. Combining antique and cathedral glass, the overall effect is achieved with different glass textures and graphic play with the leadwork. The faces are engraved with sandblasting and painted in grisaille, as are the medallions in the friezes framing the dome. To fulfill the biggest order in the history of stained glass—8,400 sq. m. (9186 sq. yds) for the Basilica of Our Lady of Peace in Yamoussoukro (Ivory Coast)— Eric Bonte founded France Vitrail International in the Paris region in 1988. He himself was born in Paris, where he studied at the École Nationale Supérieure des Arts Appliqués et des Métiers d'Art, before buying the workshop of the painter and glassworker Jean-Joseph Kef Ray (1898-1979) in Issy-les-Moulineaux, a suburb of Paris, in 1979. He completed his magnum opus in 18 months, working with a team of 60. Today, the Yamoussoukro project is still the largest expanse of stained glass in the world, containing two million pieces of antique glass. Three years prior to that, Eric Bonte had already distinguished himself with his domes for the Plaza Athénée hotel in Paris. The master glassmaker's style is admired all over the world, from the Floderer Brasserie in Strasbourg to the Arab League Conference Center in Sharm-el-Sheik and the Hiramatsu restaurant in Tokyo. These creations, impressive yet light, involve highly complex stages: a model of the project made to the scale of 1/10, the meticulous cutting of the different glasses, the crucial and delicate stage of painting, the application of grisaille and enamels, followed by their firing, and finally the patient assembly of the pieces, set in metal to fix them. All these projects testify to the excellence of a workshop that was awarded the “Living Heritage Company” label in 2016. In the late 1980s, Bonte’s outstanding artistic sense also led master of abstraction Jean Bazaine (1904-2001) to call on him to produce the stained-glass windows he designed for the cathedral of Saint-Dié.