In the 6th century, colored glass made an appearance in various church windows. This primitive technique became established in the 10th century with the advent of leaded stained glass which ensured a bright future. 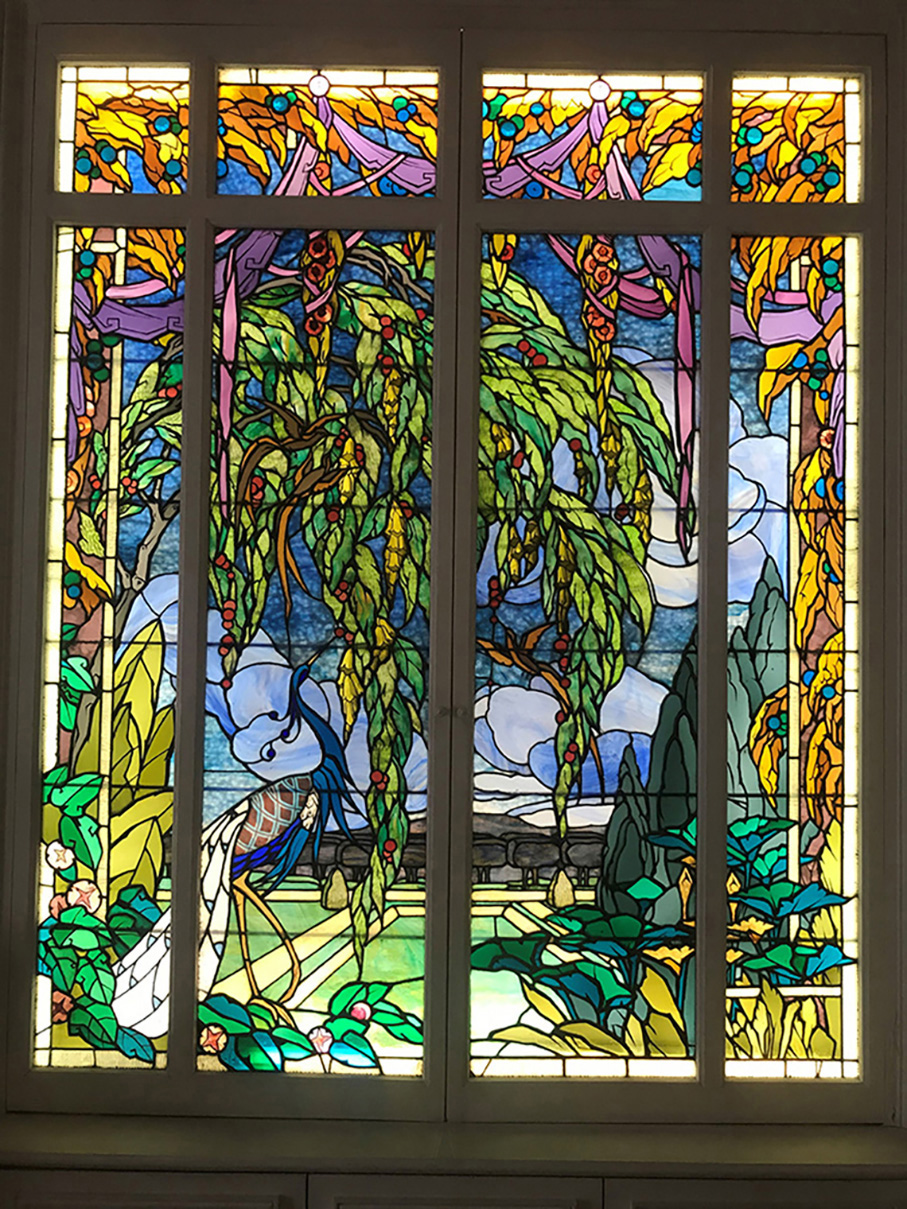 Thanks to the Treatise on Divers Arts by the Benedictine artist Theophilus, we know that contemporary leaded glass window techniques are not so different from those used in the 12th century. This laborious and demanding art soon put painters and stained glass artists in competition, but curiously, the former monopolized the latter's domain more often than the reverse. And yet six delicate steps were required to create a stained glass window: the glass was prepared; a design was sketched, with each piece numbered to facilitate cutting with a hot iron; the glass was assembled, painted and fired, and lastly it was framed in lead. Each stage had its own difficulties, depending on the material worked and the desired effect. Until the 19th century, colors were obtained by adding metal oxides to a local glass, often greenish, while experiments were carried out with the parison (a blob of molten glass), which was elongated into a cylinder, then flattened into a sheet. The restricted chromatic range of the Romanesque period (blue, red, green and yellow) was enriched with effects and nuances during the Gothic period, as brilliantly illustrated by the purplish blues of the Sainte-Chapelle in Paris.

While Romanesque architecture was content with small, thick stained-glass windows with an exquisite quality evoking goldwork, Gothic art aimed for more spectacular and monumental effects. Stained-glass windows were fragmented, and bays became mosaics of precious stones revealing an evocation of the heavenly Jerusalem: a wonder for some, a vulgarity for the Cistercians, who resolutely admired pure light, the principle of spiritual beauty, as the only kind that could illuminate in literal and figurative terms. In this case, the lead network outlined geometric shapes sometimes decorated with subtle grisailles with plant motifs or a network mesh of fine straight lines called "cage à mouche", very popular in the 13th century.

These grisailles were first seen in the 12th century, paintings on glass with initially dull colors (mainly brown, gray and black, were often doubled, tracing the lines on one side of the support and the modeling on the other. They contained metallic oxides, which had to be diluted in urine or wine to foster their fusion with the glass during the firing process. In the 14th century, the invention of silver yellow (which appeared during the firing process through the exchange of ions between metallic salts and the surface of the glass) overturned the rule requiring colors to be separated from each other by lead. From then on, this yellow was used to tint white glass or shade colored glass (turning blue into green) finally enabled stained-glass artists to cut larger pieces. Subtle firing could obtain a range from lemon to an orange sometimes close to the "Jean Cousin" shade used for flesh tones, obtained in the 16th century using an iron-rich ore called hematite. Rare non-religious stained glass made the most of these innovations, which were used to create graceful effects in small, delicate formats foreshadowing the refinements of the 19th and 20th centuries. Stained glass windows were enriched with half-tones, fine wheel engravings and Italian influences. Signatures finally appeared, notable ones including Arnoult de Nimègue, Mathieu Bléville, Valentin Bousch and Arnaud de Moles, before this art fell out of favor, and large transparent windows became popular, free at last of the grayish impurities that dulled the light. The 17th and 18th centuries swore by this type of glazing.

A Modern Revival of Fervor
The restoration of cultural heritage in the 19th century accompanied the tentative return of stained glass windows and painting on glass, though there were problems, as craftsmen struggled to find medieval techniques and colors again. Spurred by the influx of orders, the rediscovery accelerated and transformed workshops into factories, like Lusson in Le Mans (France). The second half of the century and the beginning of the next saw a wealth of new artistic trends and innovations, in which Jacques Grüber stood out. A range of colors, new effects and cathedral glass were used in the metal architecture of new train stations, department stores, banks and passageways, and then, from around 1880, in private homes.

In this area, Louis Comfort Tiffany dramatically transformed sober, traditional stained glass. By dint of twisting it and applying all sorts of unusual treatments to it, the New Yorker created mottled, marbled and iridescent glass covered with delicate paints, which he had the brilliant idea of associating with self-adhesive copper foil to replace lead and create stained glass in volume, from glasshouses to lampshades. These creations were transformed by natural or electric light into magnificent tableaux with changing colors, which strikingly embodied the organic life typical of Art Nouveau. This inspired Siegfried Bing to commission Tiffany to design some stained-glass windows based on cartoons by the Nabis artists. But it was above all the vital reconstruction after the war that gave modern artists an opportunity to express themselves through stained glass, whether classical or in the form of glass slabs, in concrete architecture. The Ateliers d'Art Sacré (active from 1919 to 1947), under the aegis of Maurice Denis, paved the way for these church windows with modern lines. Jean Bazaine, Marc Chagall, Fernand Léger and many more excelled in this field, inspiring others to follow in their footsteps in a medium that has become as rare as it is sought after in contemporary creation

Worth Seeing
The stained glass windows of the Musée de Cluny and the Sainte-Chapelle in Paris,
windows by Henri Matisse in the chapel in Vence (Provence),
those by Pierre Soulages in the abbey church of Sainte-Foy in Conques (Aveyron)
and Jean-Michel Othoniel windows in the cathedral of Angoulême (Charente).

At Last! The Sacré-Coeur Makes the List
Newsfeed
See all news
Secrets of Rembrandt’s "The Night Watch" Revealed Its Secrets
The Obelisk in the Place de la Concorde in Paris Undergoing Restoration
Influential Critic and Essayist Greg Tate Has Died Aged 64
Boston College’s McMullen Museum Receives Gift of 30 Artworks
Not to be missed
Glossary

In the 12 th century, the Japanese art of "ink floating on water"…