The next two sales of autographs from the Aristophil Collection include a few items that have never come up for auction before, but also a collection of historic objects and some treasures, paintings and drawings. 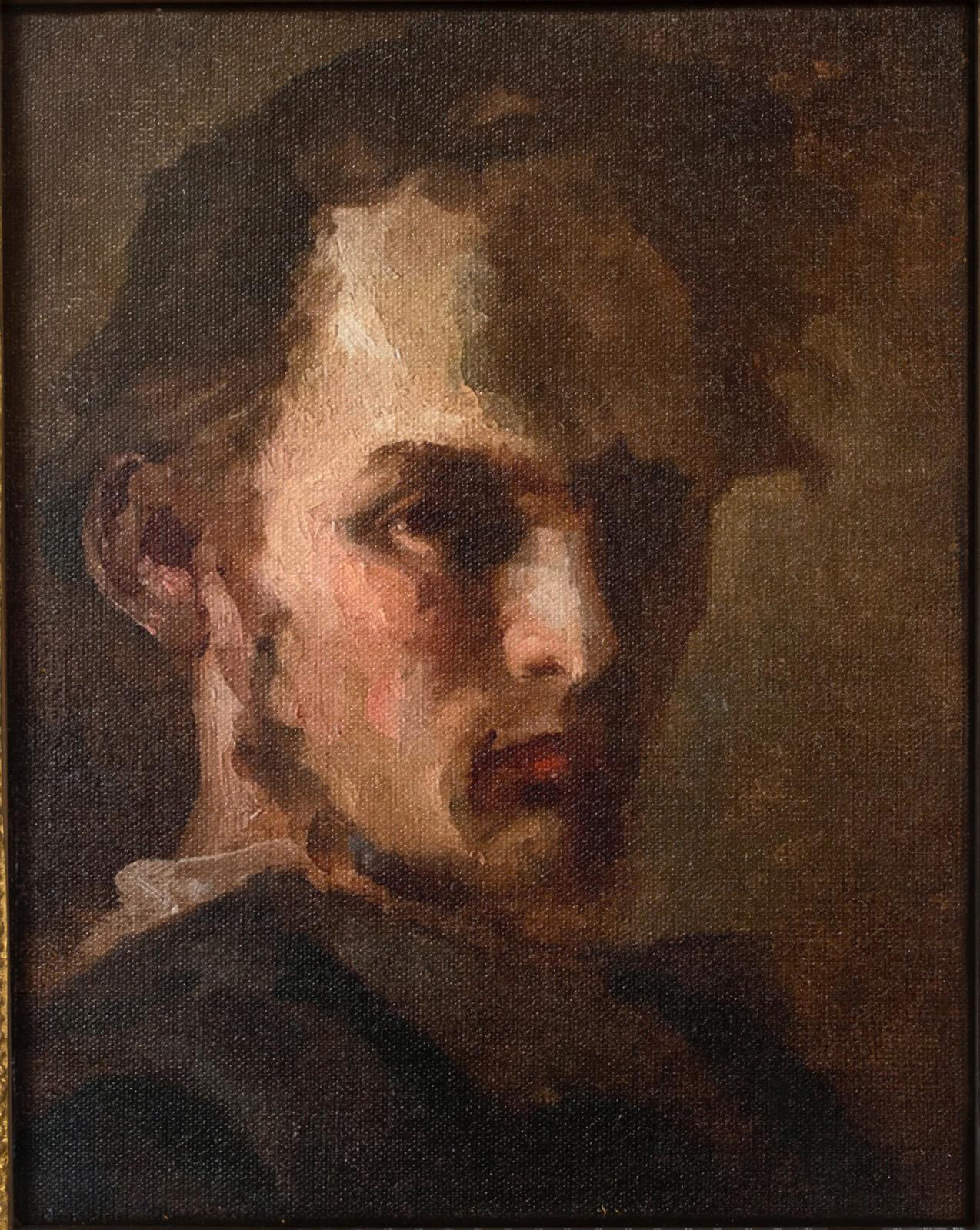 The 47th and 48th Aristophil sales, the French investment company that went into liquidation in 2015, will focus on fine arts and literature. The April 5 sale, dedicated to fine arts, is the last on this theme, says Aguttes auctioneer Sophie Perrine. Five more sales remain. It will begin with an eclectic collection of paintings, drawings, photographs and prints. One of the three Théodore Géricault (1791-1824) lots features his magnificent, alluring self-portrait (€30,000/40,000). This chiaroscuro, impasto image the young man made around 1812 shatters the myth of the romantic, sickly artist, who died at 32. Above all, it contradicts the old idea that Géricault was a mediocre portraitist. The painting is said to have belonged to novelist Alexandre Dumas fils, and it certainly was in the collection of painter Pierre Dubaut. The Self-Portrait will be included in le Catalogue raisonné des tableaux de Théodore Géricault, which Bruno Chenique is currently working on.

The Correspondence of 34 Painters
The sale features the correspondence of 34 artists—often mines of information about their private lives and creative processes—including 106 letters from Francis Picabia to his companion, poet Germaine Everling, in addition to 26 manuscripts and some drawings and photos (€30,000/40,000). Everling, who inspired the Dada movement, and Picabia were inseparable from 1918 to 1932, which were also fertile years. All the letters except one were written in 1918 and 1919. They document the artist’s Dadaist commitment, his relationship with Marcel Duchamp and the conflict between "the old and new Picabia". The polemical, iconoclastic artist reveals himself unfiltered: "Art will follow its evolution despite the fools and the jerks," he wrote, while he saw his book Platonic Racks "as a sword [that he] passes through the middle of many people's bodies". Correspondence between artists were particularly popular at Aristophil. Among the approximately ten lots in the sale, a rare set of 27 letters from Henri Matisse (1869–1954) to painter Jean Puy (1876–1960) should arouse interest (€15,000/20,000). Matisse and Puy first met when they were young. This late correspondence between 1941 and 1950 reveals a still combative, creative Matisse and a more hard-working, jaded Puy no longer at the height of his fame: "You’re getting stunted with the difficulties of painting. Don't you think you’re overdoing it?" Elsewhere, Matisse mentions Picasso's skill: "But when he works it is to say something he thinks is new because he has never said it that way." The letters take us closer to Matisse’s way of thinking about his work and expressing it: "I often ask myself: Why did I head this way and not that way! [...] Basically by instinct without really knowing why [...] In two paintings I had been at the extreme limit of my possibilities and in two following paintings I had returned to more intimacy."

In the Intimacy of Writers
Drouot Estimations will orchestrate the literary chapter at the Hôtel Drouot on April 8. In addition to the formidable body of Flaubert’s works (see box below), Victor Hugo is widely represented with 40 lots. About 15 manuscript novels and many literary manuscripts from one to more sheets are cataloged. The relationship between Louis-Ferdinand Céline (1894–1961) and Roger Nimier, his postwar editor, is exceptional from a literary history perspective. It is traced through 228 letters (€150,000/200,000) totaling 350 pages that the author of Journey to the End of the Night wrote to the young writer, whom he met through Marcel Aymé, between 1949 and 1961. While exiled in Denmark in 1949, Céline, who proudly called himself a "stinking goat", accepted help from Nimier (as an unpublished letter attests). Several years later, Nimier became a literary consultant at Gallimard for the novel Castle to Castle, which was somewhat successful. Besides its literary quality, the correspondence is a concrete, factual testimony to Céline's extravagant, cantankerous, self-centered personality and extreme self-victimization. In the last letter, dated June 7, 1961 (he died on July 1), the author wrote: "I am too handsome, too young! Irresistible! Thanks to you! I catch myself loving myself!"

Zola’s Double Life
Two miraculously conserved sets of "eromanesque" correspondence immerse us into the Zolas’ private life: 312 letters from the writer to his wife Alexandrine (€300,000/400,000) and 200 to his lover Jeanne Rozerot (€150,000/200,000). The correspondence lasted from 1876, twelve years after Zola and Alexandrine met and six years after their marriage, until 1901. The writer sometimes sent his wife two letters a day when they were separated by travel or his exile in England. Expert Thierry Bodin says they contain "the most trivial details of his daily activities [as well as] his deepest bouts of despair. [...] This correspondence is, therefore, both intimate and literary, full of anecdotes and confessions." Each letter contains at least three pages of tightly packed lines. The second set of letters stretches from 1892 to 1902. In 1888, the Zolas hired Jeanne Rozerot, 21, as a maid and laundress for their house in Médan. She became his lover and soon, the mother of a daughter and a son. Alexandrine destroyed their letters in an outburst of anger when she found out about the affair in 1891 but they continued writing to each other. In July 1892 (the lot’s first letter), the lovers sometimes began writing in code: "Madame E. J. 70", general delivery, and "Monsieur Z. R. 70". The letters also reveal Zola’s tenderness for his "dear wife" and their "darling little sweethearts", provide much information about the development of his work and mention the Dreyfus affair. The surprising letters include poet Charles Baudelaire’s application to the Académie Française addressed to its permanent secretary Abel Villemain (December 11, 1861). Aware of his temperamental reputation, Baudelaire humbly mentioned his works, notably "a book of poetry that made more noise than it wanted to" (editor’s note: The Flowers of Evil), adding, "But in my own eyes, Sir, this list of titles is quite insufficient, especially if I compare them to all those, more numerous and more singular, that I had dreamed of." In the face of obstacles and attacks against him, Baudelaire ended up withdrawing his application (€4,000/5,000).

A manuscript and two autograph letters by Van Gogh underscore the complex, endearing personality of the painter, who copied quatrains by American poet Longfellow and a passage from the Bible. He wrote about his passion for reading to his friend Borchers (€50,000/60,000) and his painful relationship to his disease to the Ginoux in Arles (€200,000/250,000). The sale includes 17 lots of letters by Paul Gauguin, three of which mention Van Gogh. There are 15 letters, plus a lot of five (1891–1893) sent to his wife Mette before and after his stay in Polynesia and 21 sheets of texts and drawings. Two letters are illustrated with a drawing, another with an initialed woodcut letterhead. In letters to his painter friends Camille Pissarro, "Schuff" (Émile Schuffenecker) and Daniel de Monfreid, Gauguin wrote about Tahiti, his sometimes trying work, art and politics. "Who are these people strutting around Manet? The Gervex’s and the Goeneuthe Raffaelis (probably)" (letter to Pissarro, €10,000/12,000). The "Flaubert chapter" is also exceptional: 45 lots meticulously described by Thierry Bodin, expert of both sales. Estimates range from €1,000/1,500 for the four-page autograph manuscript of Voltaire to €400,000/500,000 for Novembre, a youthful manuscript. There are many letters to poet Louise Colet, in which all the writer's masterpieces are mentioned, including a beautiful love letter (€8,000/10,000), and 32 exciting missives to his "good" Émile Zola, whose books he admired (€30,000/35,000).
Worth knowing
The Aristophil collections no. 47. Works on paper & autographs.
Tuesday, April 5, 2.00 pm,
Neuilly-sur-Seine. OVA Aguttes. M. Bodin.

Bergé’s Books, the Last Act: Woolf and Genet
Not to be missed
Pre-sale