Soulages and Senghor: Linked Through Poetry

In 1956, the year they met, this painting sealed the friendship between the abstract artist and the Senegalese writer and politician. 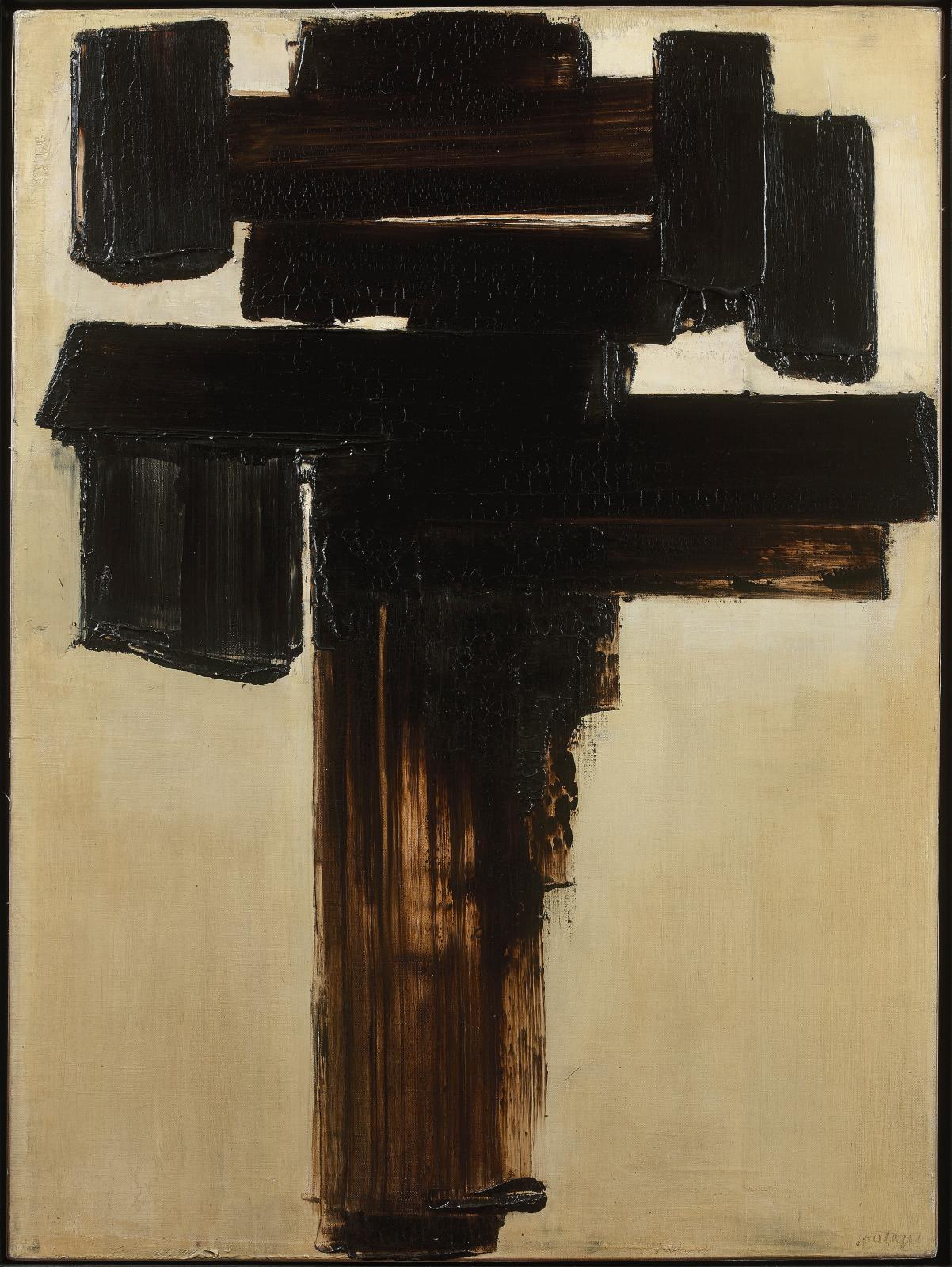 Scarcely was the oil dry on this painting by Pierre Soulages than Léopold Sédar Senghor carried it off from his studio so that he could admire it at his leisure. Acquired in 1956, the work is coming on the market today as part of the estate of Colette Senghor, the wife of the writer, who was also the first president of the Republic of Senegal. Senghor's instant love for the art of the abstract painter was an aesthetic thunderbolt. Two years later, he described it in these terms: "Soulages' paintings always remind me of black African paintings and even sculptures. There is the same disdain for all vain elegance, the same powerful sense of the obvious, the same way of arresting the viewer at the very spring of life." We don't know what occasioned the meeting of the two men. Introduced to modern art by his friend Georges Pompidou (France's President from 1969 to 1974: Ed.), who introduced him to works in museums and art galleries, Senghor happened to see some of Soulages' work at an exhibition in the Galerie de France in 1956. At any rate, his bond with the artist dated from that year. Through numerous interviews, the writer tried to get a clearer understanding of the artist's approach and the intimate nature of his work, concluding that "poetry" was the guiding force. He shared his analysis in an article published in 1960. Rather than thought, it is the arm that directs Soulages' brush, knife or blade, creating forms he then organizes to give various energies to his paintings. His blacks come alive in a whole variety of shades through their intensity, light refraction index, texture and thickness. Fascinated by his friend's work, Senghor initiated the exhibition paying tribute to him in 1974 at the Musée Dynamique in Dakar. The painting he had bought naturally featured prominently. This work illustrates a technique adopted by the artist in 1953 when he abandoned his narrow continuous bands and used a broad brush to trace rectangular strokes, juxtaposed horizontally and vertically. Their density is concentrated in the upper part, while dark descending lines cross through the light background still clearly visible at the bottom of the composition, as with his walnut stains of 1947. The work's dynamic energy arises from this opposition, while its power lies in the massive brushstrokes. Brick by brick, they give the work all the weightiness of architecture.

Soulages and Senghor: An Eagerly Awaited Duo
Newsfeed
See all news
Billionaire Collector Surrenders 180 Stolen Antiquities
World Record for Domenico Gnoli at Drouot
The Louvre Snaps Up Red-Figured Amphora from the Bellon Collection
Cécile Guettier Awarded Prix Villa Noailles des Révélations Emerige 2021
Not to be missed
Spotlight
The Lacquered Felines of Jean Dunand, Master of…
Making their debut on the market, these three big cats date from…
Spotlight
An Invitation to the Ball with Magnificent Evening…
A wardrobe in exceptional condition takes us back to the splendors…
Spotlight
Eugène Gaillard, Samuel Bing and Émile Gérard:…
The destiny of three men converged on this iconic piece of Art Nouveau…
Spotlight
First Appearance at Auction of a "Saint Peter"…
A splendid find—a Ribera in fine condition, signed, dated and with…