Part of the paintings designed to adorn a replica of the Cosquer Cave, scheduled to open in Marseilles in 2022, are being produced in the Toulouse studio of impassioned artist and prehistoric art specialist Gilles Tosello. We take a look behind the scenes. 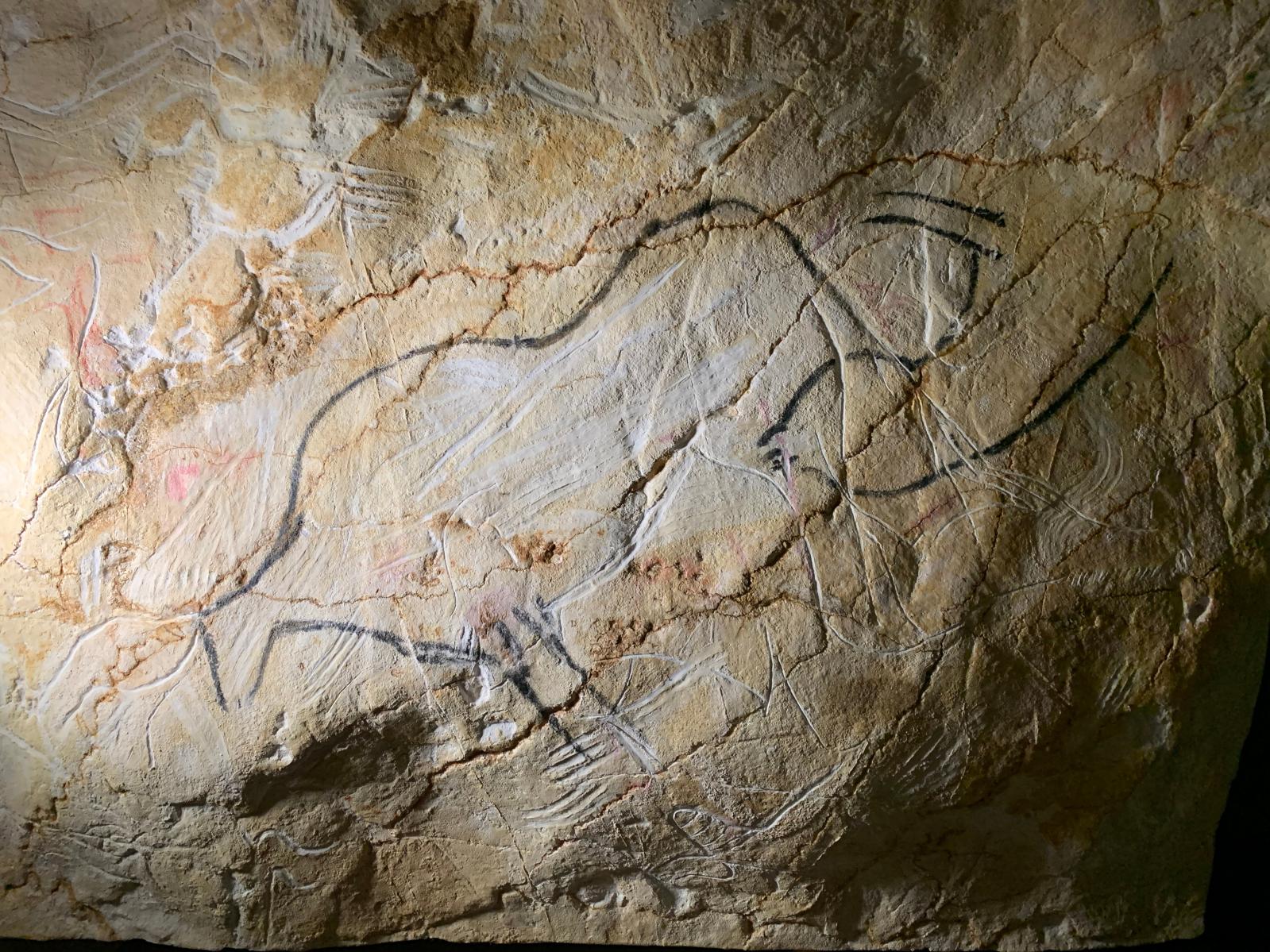 This is a fabulous world full of horses, bison, antelopes, chamois, seals and penguins: an almost lunar landscape decorated with red and black handprints, carved with deep scratches and mysterious geometrical signs. Various scenes can be discerned here and there: a man falling, struck by a weapon; an animal on the ground, its belly pierced by an arrow; a megaloceros, the largest deer of all time, posing in all the majesty of its oversized antlers.

Gilles Tosello stands before this ochre-veined beige wall like a painter before a monumental canvas. He handles charcoal and coal with the same attention to detail, working not in the soft northern light beloved by artists but in his dim Toulouse studio, lit here and there by spotlights. Tables and metal shelves are covered in pots of paint, bags of sand and marble powder, jars of colored mixtures, tools and brushes—the whole jumble tells the story of an extraordinary endeavor: creating a replica of the Cosquer Cave in the Triperie Inlet near Cape Morgiou in Marseille, which will open next year just a stone's throw from the MUCEM. The replica will faithfully reproduce—right down to the temperature, atmosphere and smells—the vast archeological treasure discovered in 1985 by diver Henri Cosquer, which is doomed one day to disappear beneath the waves.

A Multitude of Small Figures
To create this artistic jewel, the Kléber Rossillon group, licensee of the site located in the Villa Méditerranée until 2045, has enlisted the people who produced the facsimile of the Chauvet Cave in Ardèche (known as Chauvet 2 or the Cave of Pont-d'Arc), which opened to the public in 2015. They are Stéphane Gérard, a leading speleothem specialist who reconstructs stalagmites and stalactites in his Paris workshop in the 13th arrondissement; Alain Dalis, a visual artist based in Montignac in the Dordogne, and Gilles Tosello and his colleague Bernard Toffoletti. "Between them, they are reconstructing 1,722 square feet of cave walls using a methodological practice now well-established by the different contributors, including a specialized scientific team," says Geneviève Rossillon, president of the group. At Cosquer, unlike Chauvet, there are no spectacular paintings with overlapping herds of horses or groups of lions poised to pounce on their prey. "Here the artists drew a multitude of small figures—about five hundred—in a cave that was then a few miles from the sea," says Tosello. "Men came here for 10 millennia, 20 to 33 thousand years ago."

Why did they draw so many animals and so few human figures? What do the scratches on the wall mean? Should we see some kind of signature in the carved rhombuses and rectangles? And could the black line be a shadow? There are endless questions for 21st-century artists. In an attempt to find some answers, Tosello completed his studies at the Ecole des Arts Décoratifs in Paris with an archeology course and a thesis on Paleolithic expression. "For many, prehistoric art has no rules, as if the animals were thrown higgledy-piggledy onto the walls," says the specialist. "But if you look closely, you can see that though no two drawings are alike, they are all related. It feels like there was a transmission process at work, and even signs of affiliation, with artists drawing on a common graphic vocabulary in line with a tradition."

A Long, Narrow Tunnel
When producing a facsimile of this type, the drawing is practically the final stage of a work that began in the cave itself. This sank almost entirely underwater several millennia ago. Starting in the mid-1990s, divers went down to a depth of 121 feet, entering the long, narrow tunnel used by Henri Cosquer—where three foolhardy amateurs drowned in the late 80s, losing their bearings when the mud stirred up by their flippers obscured their vision. Several extremely precise survey campaigns were then carried out using sophisticated three-dimensional digital tools, making it possible to create a clone of the cave. Using the files obtained in this way, a special milling machine was created to carve blocks of high-density foam, which provided a base for the support reproduced by molding. This is how the white resin shell forming the wall of the cave was created. It then had to be treated before the drawings and paintings could be applied.

Artists Lorena Acin and David Sartre-Doublet, also working in Tosello's studio in Toulouse, use every possible means to reproduce the surface of the cave, made up of deposits accumulated over time, highly conducive to drawing, areas of clay and limestone, transparencies and countless rough areas of shiny calcite formed by the humidity. They use materials like natural pigments (red, ochre, burnt sienna and burnt umber), crushed glass and quartz, and absorbent cotton mixed with resin and acrylic gels. Once the mixtures are ready they set to work, aided by photographs of the cave projected on the exact spot where the images are to be applied, so that the original setting can be reproduced as closely as possible.

To the Nearest Millimeter
Tosello can then move in, endeavoring not only to reproduce the line to the nearest millimeter but also to transmit the energy of the artist—who drew rapidly in a few gestures—and above all to understand the works. With his partner, Carole Fritz, also an archaeologist and prehistoric art specialist, he constantly questions the composition of a painting, the purpose of a particular drawing, the symbolism at work in the cave, the meaning of a sign like the zigzag that runs along the walls of Cosquer. Is it a mountain, a river, or thunder? "We have lost the storyteller of these tales" says Tosello. "But he left these drawings to show us his world and its legends, perhaps full of heroes fighting fabulous animals. Basically, what we have in front of us is the archetype of humanity's oldest myth."

Opening: South Korean Artist Lee Ufan in Arles
Not to be missed
Analyses