From the Tuileries to Versailles, Napoleon Bonaparte sought a palace worthy of his imperial aspirations. But he would never see his most ambitious palatial project through to completion. 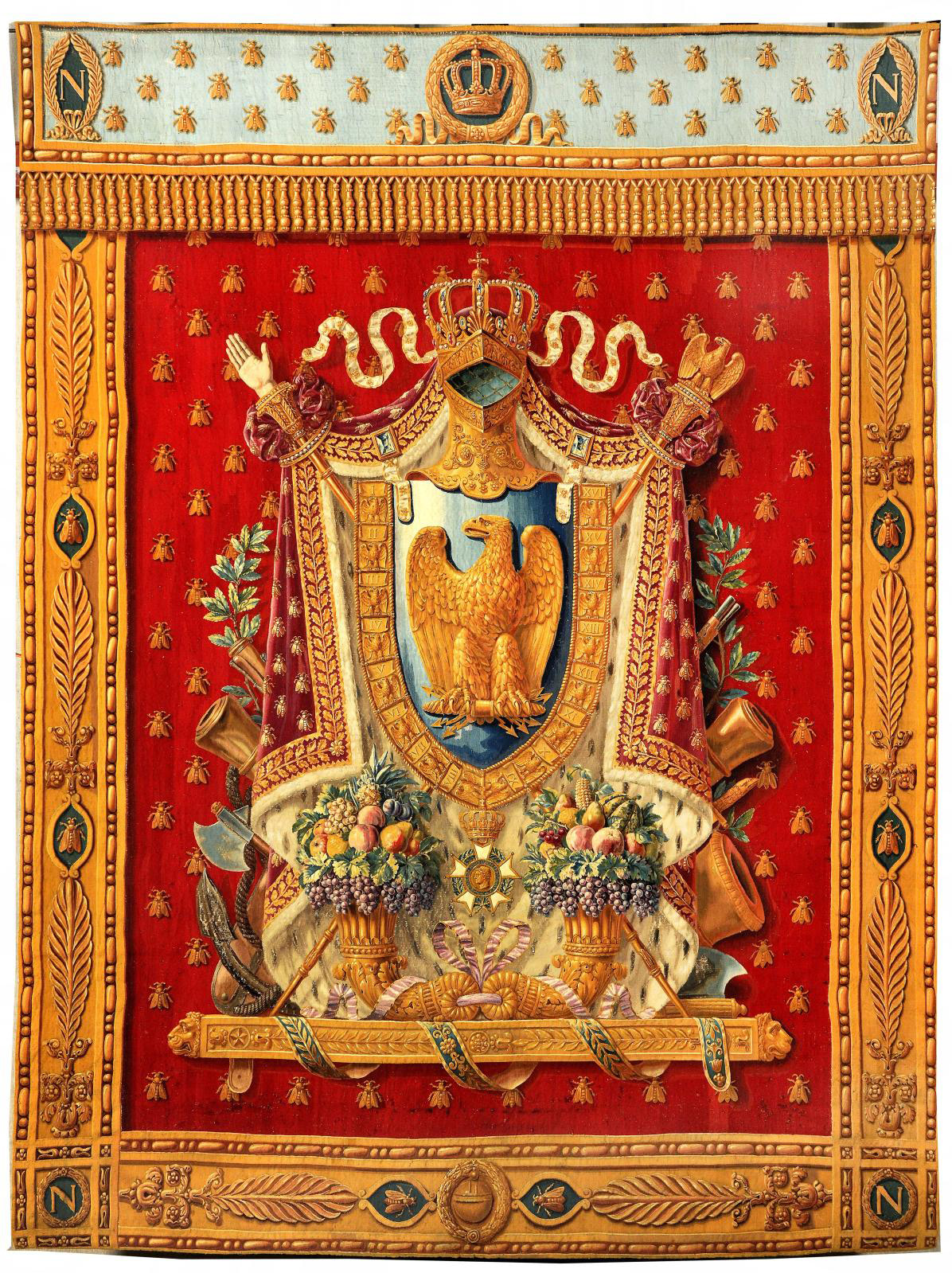 The Manufacture of Gobelins, The Great Weaponry of the French Empire (detail), 1808-1811, doorframe for the Emperor's grand cabinet in the Tuileries, tapestry after Jacques-Louis de La Hamayde de Saint-Ange, on a cartoon by François Dubois, Mobilier national.
Isabelle Bideau

The Manufacture of Gobelins, The Great Weaponry of the French Empire (detail), 1808-1811, doorframe for the Emperor's grand cabinet in the Tuileries, tapestry after Jacques-Louis de La Hamayde de Saint-Ange, on a cartoon by François Dubois, Mobilier national.
Isabelle Bideau

Few rulers have had as many palaces as Napoleon Bonaparte. First Consul of the Republic, he settled in the Tuileries Palace in 1800 and chose the Chateau of Saint-Cloud as his secondary residence in 1802. As French Emperor, he expanded the number of properties in France and as part of the "Great Empire" renovated Fontainebleau in 1804 and gave the Chateau of Meudon to his son in 1811. He also undertook a number of grander projects, such as a possible move to Versailles and the construction of a new imperial palace, the "Palace of the King of Rome". However, during the fifteen years of his government, it is not clear whether Napoleon ever managed to find the palace of his dreams...

On 20th of the Brumaire Year VIII (11 November 1799), the day after the coup d'état which overthrew the French Executive and government, the "provisional consuls" moved to the Luxembourg (Paris), the former palace of the deposed government. Three months later, after renovation work that had been conducted with tremendous fanfare, the Consuls  —Bonaparte, Cambacérès and Lebrun— appointed by the new Constitutionmoved to the Tuileries Palace. To settle within these walls was to relive recent political memories: its forced occupation by Louis XVI and Marie-Antoinette, from October 1789 to August 1792, the installation of the National Assembly in the Salle du Manège and then, after the fall of the monarchy, the transfer of the National Convention and its committees to the Tuileries themselves. The interior also contains reminders of the Valois and Bourbon periods, particularly Louis XIV: despite devastation suffered during the Revolution, the decor of the Tuileries has remained predominantly in the style of Louis XIV. Napoleon Bonaparte then took possession of the former apartment occupied by Louis XIV, Louis XV and Louis XVI, in turn, on the second floor of the south wing, and his wife Josephine of that of Marie-Antoinette on the ground floor.

"From Magnificence to Gold" in the Tuileries Palace
Throughout his time in power, Napoleon made every effort to improve and make additions to the former royal estate: The Carrousel Gate (1801-1802), the chapel (1805-1806), the Carrousel arc de Triomphe (1806-1808), the new auditorium (1806-1808), the new wing (1807-1814). Inside the palace, architects and technicians carried out several major renovations and interior furnishing projects to bring the palace up to date and make it suitable for its imperial occupant. The latter was rarely satisfied: he regarded his architects as excessive spenders and their furnishings as inadequate, and demanded "magnificence, gold, tapestries from the Gobelins and large paintings". Nevertheless, the Tuileries Palace was a magnificent project, where public and private factories displayed their most prestigious productions for fifteen years. On a personal level, Napoleon was not happy with the Tuileries, which offered little privacy and insufficient access to nature. The solution was to buy the Élysée from Joachim Murat, who had become King of Naples, in 1808. Renamed "Élysée-Napoléon", this palace offered the luxury of a vast garden sheltered from view. But the Emperor was also keenly aware of the historical, urban and political importance of the Louvre-Tuileries complex. In 1802, he launched the project for the thoroughfare that would become the Rue de Rivoli, isolating the palace from the capital and thus serving as its protection and buffer. Beyond that, he pursued the age-old "grand design" of joining the Louvre to the Tuileries. The man was anxious to anchor his dynasty in the history of France. The complex reflects this better than any other residence.

Chateau of Saint-Cloud, the New Versailles
Before coming to power, Napoleon already had a suburban residence, Malmaison, but this country manor house seemed insufficient for large-scale entertaining. In 1801 the work of "restoration" of the Chateau of Saint-Cloud began. This decision anticipated the monarchic shift that was to take place during the lifetime of the consulate. After having been owned by the Dukes of Orleans, the residence was bought by Louis XVI in 1785 for Marie-Antoinette. The queen had the interiors updated, and the chateau was the last summer residence of the Bourbons monarchs after their forced departure from Versailles. In September 1802, the "Consular Court" made its first visit to Saint-Cloud.

“All the forms of the monarchy reappear," Stanislas de Girardin observed, “[...] On Sundays, the road from Paris to Saint-Cloud is littered with carriages, like that of Versailles was on such a day under the Ancien régime. Napoleon lives in the residence of kings and his furnishings perhaps surpass theirs in magnificence.” It was at Saint-Cloud, on the 28th of Floréal Year XII (18th of May 1804), that a delegation of the Senate announced Napoleon’s ascension to the imperial dignity. Saint-Cloud became the suburban double of the Tuileries Palace, a sort of new Versailles.

Fontainebleau, "The True Home of Kings”
Napoleon's relocation to Fontainebleau marked a new stage in the process of incorporating the old monarchical traditions into the new regime. At the end of 1804, the Emperor had the chateau refurnished and redecorated to welcome Pope Pius VII, who had come from Rome to coronate him. After the signing of the Treaties of Tilsit, in July 1807, he organized a series of imperial court trips in the fall, in the tradition of the Ancien régime. Hunting, a royal sport if ever there was one, took up more and more space in the imperial schedule. There is no dearth of evidence for Napoleon's taste for Fontainebleau. On August 4, 1816, in his exile on St. Helena, he confided to Las Cases: "This is the true home of kings, the house of the centuries." The disjointed nature of the edifices, so often criticized in the chateau, is precisely what makes it so valuable in his eyes. It underlines the inscription of its regime in the long duration of the history of France where monarchs and dynasties followed one another.

The gift of the Chateau of Meudon—former residence of the dauphins—to the King of Rome, born on March 20, 1811, responds to the same spirit. This desire to replace the "third royal family" with a "fourth Napoleonic family" brought the focus back to the Chateau of Versailles, the mythical home of the absolute monarchy. As at the Louvre, the Emperor inherited a grand design that predated the Revolution. It was a simple matter of reconstructing the courtyard façade, unanimously criticized for its heterogeneity, between the small chateau of Louis XIII and the wings successively added under the Sun King, which produced an unpleasant bottleneck effect. The sovereign was reluctant, hesitating in the face of the extent of the cost. In the end, he was satisfied with refurbishing and refurnishing Trianon. Napoleon had his first lunch there on September 1, 1808. It was to be a kind of observatory for the "restoration" of Versailles. In St. Helena, he returned to the chateau of Louis XIV: "I condemned Versailles in its creation, he said to Las Cases, but in my grandiose notions of Paris, I dreamed of taking advantage of it and making of it, in time, only a kind of suburb, a neighboring site, a vantage point, and in order to make it more suitable for this purpose, I had conceived a particular idea, the design of which I had submitted to me." It concerned panoramas in the masonry of the conquered capitals, which would have been "placed at the door of the capital of Europe, which could not fail to be visited by the rest of the universe".

A witness to several "days" of the Revolution, Napoleon was always suspicious of Paris and its rebellious population. In his fits of bad temper, he toyed with the idea of transferring the capital to Lyon, the ancient metropolis of Gaul. It seems that in an effort to prevent this move the architects Charles Percier and Pierre-François-Léonard Fontaine proposed as an alternative, a residence worthy of Napoleon and his reign, to be built near the city. Located at the top of the Chaillot hill, the new palace would be at the heart of a complete reconfiguration of western Paris. The Bois de Boulogne would form its large park. In 1811, the project took shape and received the name "Palais du Roi de Rome" (Palace of the King of Rome) even before the birth of the latter. The following year, the excavation work began, and the construction site expanded to include a sort of administrative city established around the Champ-de-Mars. The collapse of the imperial regime swept away the plan for a palace which, according to Percier and Fontaine, "would have been the largest and most extraordinary work of our century". Heirs to the Revolution, Napoleon, his architects and decorators were also orphans of the Ancien Régime. In aesthetics as in politics, they looked to Greco-Roman antiquity, to a phantasmal Middle Ages, but also, perhaps more importantly, to a very recent period, that of the Bourbon Kings. If the Empire had survived, Napoleon would most likely have resettled in a remodeled Versailles, while still erecting the immense palace on the hill of Chaillot. The regime would thus have seen its dual symbolic genealogy conveyed in stone: French monarchy on the one hand, neo-Roman or neo-Carolingian empire on the other. The enterprise of incorporation was only half successful. The mixed success of the French emperor meant that in 1814 and 1815, the ruler of France settled or resettled in "his" palaces and "his" furniture, with no other solution of continuity than the suppression of some emblems. "My brother, we had a good concierge", Louis XVIII is said to have told the Count of Artois after visiting Fontainebleau. Napoleon the architect was written into the long history of France, but not in the manner he had hoped.