Napoleon I's goldsmith created this vermeil ewer and basin for Joachim Murat, based on a design by Charles Percier. 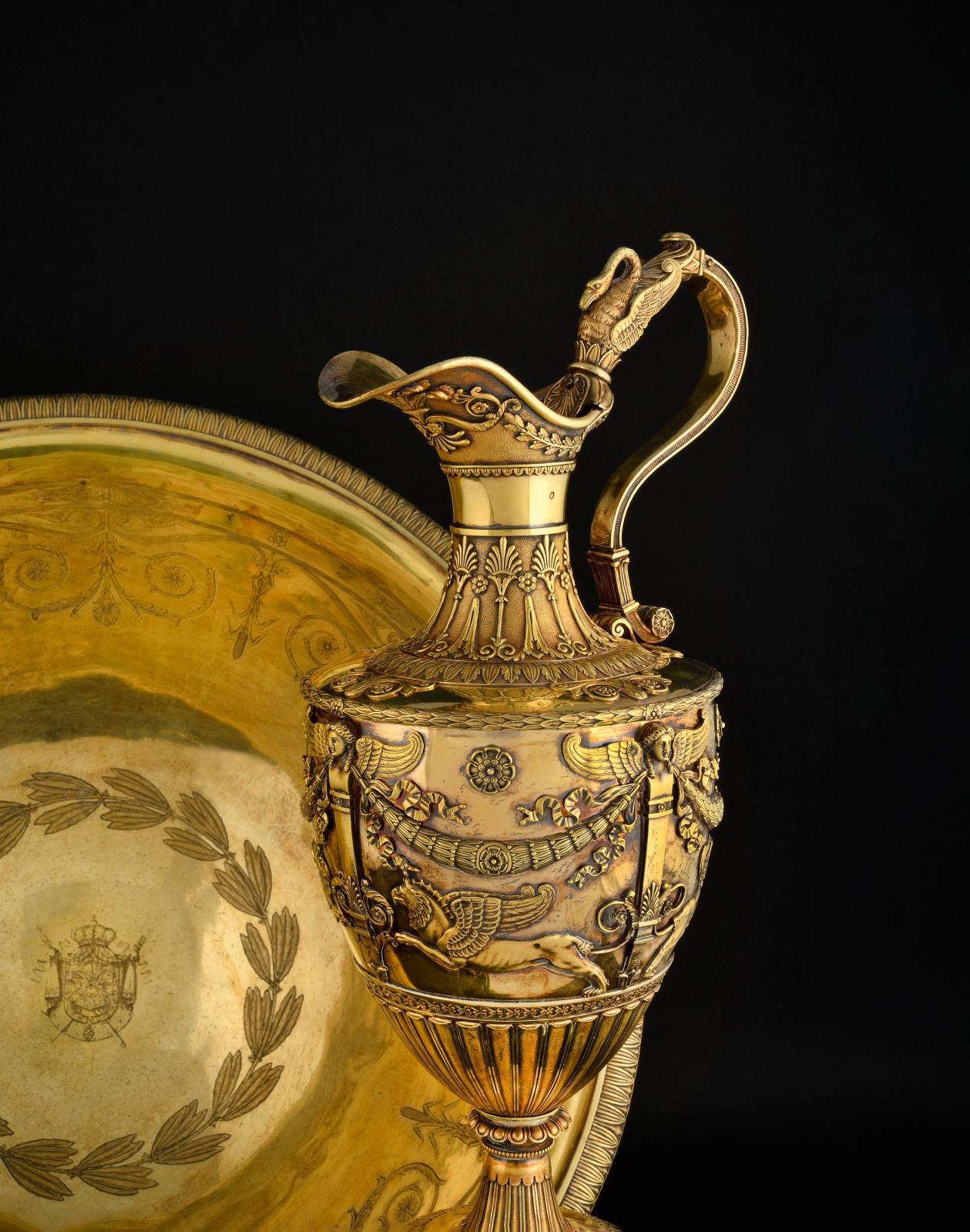 Martin Guillaume Biennais' name is inseparable from the goldwork of the First Empire. The goldsmith crossed paths with Napoleon I while he was still Bonaparte. After being admitted as master in 1788, Biennais settled in Paris as a tabletier (maker of fancy goods in bone, wood, etc.). He believed in the good fortune of the young general, and readily extended credit to him. When Napoleon became emperor, he repaid this trust by calling on Biennais at key moments in his reign: the imperial insignia for the coronation, travel kits improving daily life during military campaigns, ceremonial weapons and decorations reflecting the prestige of the regime are all due to his talent.

The splendor encompassed furniture, in which Biennais also excelled, thanks to the abolition of guilds in 1791. The Emperor's relatives likewise lavished money on their own etiquette (label), and called upon the goldsmith in turn. They included Joachim Murat, one of Bonaparte's former officers, who covered himself in glory in the field. This ewer and its basin were made for him shortly after he acceded to the throne of Naples in 1808—as witness his arms, which still feature the collar of the Legion of Honor rather than that of the Order of the Two Sicilies. Far from the battlefield, the valiant soldier could thus enjoy a luxurious wash worthy of a sovereign. These pieces, the only ones we know of in vermeil (the others are in silver), were presented on a small tripod stand called an "athénienne", which took its form from Classical incense-burners. The basin stood on a stretcher supported by three legs. Charles Percier produced the designs Biennais used as models to create these refined items. Only three athéniennes are referenced today: one belonging to Napoleon now in the Louvre collections, another in Fontainebleau and one, now lacking its accessories, in New York's Metropolitan Museum—which could be the one used for this set, as their decoration is very similar. The swan adorning the handle of this ewer spreads its wings on the top of the stand designed to hold the basin. Though naturally associated with water, it also symbolized Apollo, whose chariot it pulled. An ornament of choice from the Consulate onwards, the bird flew over the entire Empire before disappearing during the Restoration. The end of the imperial regime was also the swan song of Biennais, who sold his collection in 1821.