Doctor Vincent had a real passion for the French Empire and more particularly for lavish table settings when silversmiths were finally back in business. But only for the finest tables. 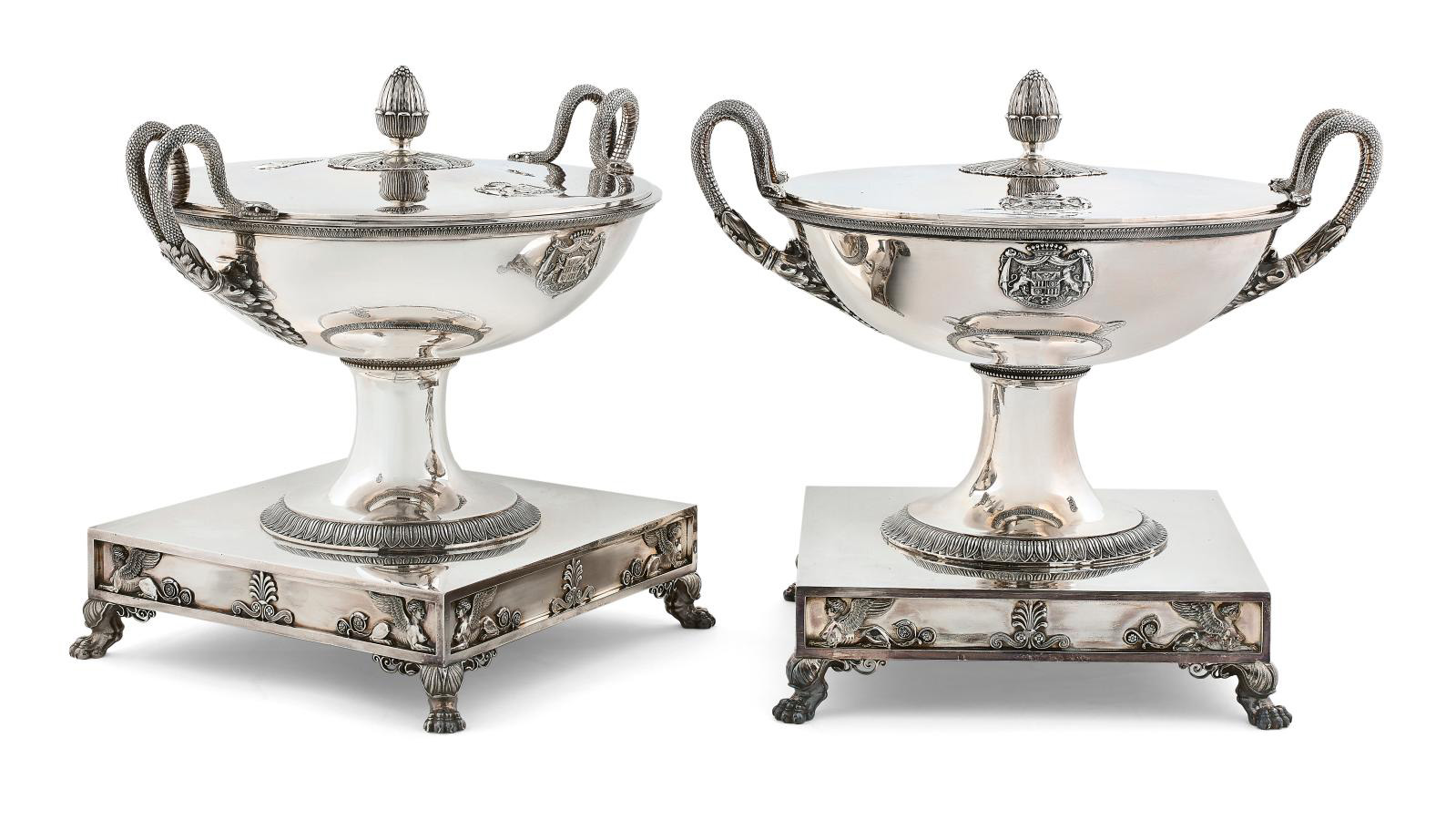 This sale echoes France’s commemoration of the two-hundredth anniversary of Napoleon’s death. Three exhibitions are underway at the same time: silverware and furniture by Martin Guillaume Biennais at the Caillebotte Foundation in Yerres, near Paris; furniture from the Emperor’s lost palaces, in Paris; and "A Palace for the Emperor Napoléon I" at the Château of Fontainebleau. Another, "Napoleon, Legends" ran throughout the summer at the fine arts museum in Ajaccio, Corsica. All of them featured silverware as an important marker of the regime’s splendor.

There is no such thing as luck. Dr. Vincent, who collected most of the pieces presented, belongs to a leading Corsican family (one of its members was Resistance fighter Jean Nicoli), which means that they are unusually homogeneous. "It’s been a long time since such an interesting group has come up for auction in France," says Ms. de Noblet, the sale’s expert. The collection originated with pieces that had been passed down from generation to generation and continued with acquisitions at the 1970s’ greatest auctions featuring the early 19th century’s leading names.

The Empire’s Tastes
Philippe Costamagna, the director of the Palais Fesch-Musée des Beaux-Arts in Ajaccio, has published Les Goûts de Napoléon (Napoleon’s Tastes). Packed with juicy stories and information, it also relates Bonaparte’s culinary habits, for example, that he liked red mullet. While the silverware collection about to be dispersed has no fish service, there are prestigious shaped pieces with the hallmarks of the greatest craftsmen, who were delighted to be working again thanks to the Empire and ushered in a new spirit. Under Napoleon I, etiquette re-established Ancien Régime splendor with tables set in the French style. Centerpieces, sculptural baskets, dishes and candelabra made a major comeback. A pair of silver candelabra by Marie-Joseph-Gabriel Genu, their columnar shafts featuring three back-to-back winged lions on the base, is estimated €15,000/20,000. Dishes of all sizes were set around them.

This luxury was appreciated by European courts, which regularly ordered complete services, especially from Odiot. In spring 2017, the Museum of Decorative Arts (MAD, musée des Arts décoratifs) in Paris devoted an exhibition to Jean-Baptiste-Claude Odiot (1763–1850), who built a silver and vermeil empire without ever having been Napoleon I or Louis XVIII’s official silversmith. His was a real French-style success story. "Mr. Odiot’s reputation is universal,” a columnist wrote in 1820. “All the items that come out of his workshops are of the greatest beauty and worthy of his high reputation in every respect." Centerpieces were among his most prestigious creations. Odiot poured all his talent into making them, working with Pierre-Paul Prud'hon on designing their mythological figures; Thomire did the same. The one presented here, featuring two draped women holding a basket (€50,000/60,000), gives some idea of the splash they must have made on a set table. The same was certainly true of the other shaped pieces. A pair of tureens and another of dessert bowls with the coat of arms of Count Charles-André Pozzo di Borgo applied on the bodies and lids is expected to fetch the highest price: €60,000/80,000. "Tureens with snake-shaped handles rank among Odiot’s most successful pieces,” says the expert. “They were mentioned in publications from 1814 to 1819." That is easy to understand when looking in detail at the finely chased snake scales featuring a naturalism ushering in the beginning of the next century.

Large services could include up to four oil cruets. The one in the catalog is an unknown model in the service delivered to Jerome of Westphalia c. 1809. A Winged Victory tops the pilaster body, while the carafe holder is formed of three child zephyrs holding a garland of laurels, but in silver and not vermeil (€6,000/8,000).

A History of Style and Craftsmanship
Empire silverware did not mark a break with the previous century: the reference was still antiquity. The neoclassical style launched during the Ancien Régime continued. Moreover, almost every silversmith had been trained in the 18th century. For example, Roch-Louis Dany, received as Master in 1779, embraced the new taste when the Empire put him back to work. His teapot and its vermeil stand (1809–1819) are estimated from €1,000 to €1,200. Their ornamental repertory was teeming with victories, charming winged zephyrs, palmetto and laurel friezes, sconces, sphinxes, swans and Egyptian heads. The craftsmanship is amazing.

Hallmarked works by Biennais, including an Etruscan-style teapot featuring his particular, unmistakable wide frieze on a polychrome enamel ground, and Odiot, are alongside creations by lesser-known masters familiar mainly to specialists. A lidded tureen with its stand and lining (€25,000/30,000) and a helmet-shaped sauce boat with beautiful, sinuous, incredibly light lines (€3,500/4,000) illustrate secular art by talented Jean-Charles Cahier (1772–1857), who specialized in religious silverware. He made liturgical objects for the chapel at the Grand Trianon in 1804 as well as the one at the Tuileries in 1805–1806.

Diplomatic Gifts Signed with "N" for Napoleon
Newsfeed
See all news
French PCF Deputy Fabien Roussel Opposes the Sale of a Zola Manuscript
The "Printemps de l'Art Déco" Announces its Dates and Program
Preemption: The Art Nouveau Bench by Eugène Gaillard for the MAD
Berlin State Government Seeks to Strengthen Culture
Not to be missed
Spotlight
An Invitation to the Ball with Magnificent Evening…
A wardrobe in exceptional condition takes us back to the splendors…
Spotlight
Eugène Gaillard, Samuel Bing and Émile Gérard:…
The destiny of three men converged on this iconic piece of Art Nouveau…
Spotlight
First Appearance at Auction of a "Saint Peter"…
A splendid find—a Ribera in fine condition, signed, dated and with…
Spotlight
The Romantic Treasures of the Pierre Collin L…
Some 300 books form the collection of Romantic illustrated books…