The opening of the Louvre Abu Dhabi on November 11, was a success, thanks to both its architecture and a display exploring meeting points between different cultural routes. 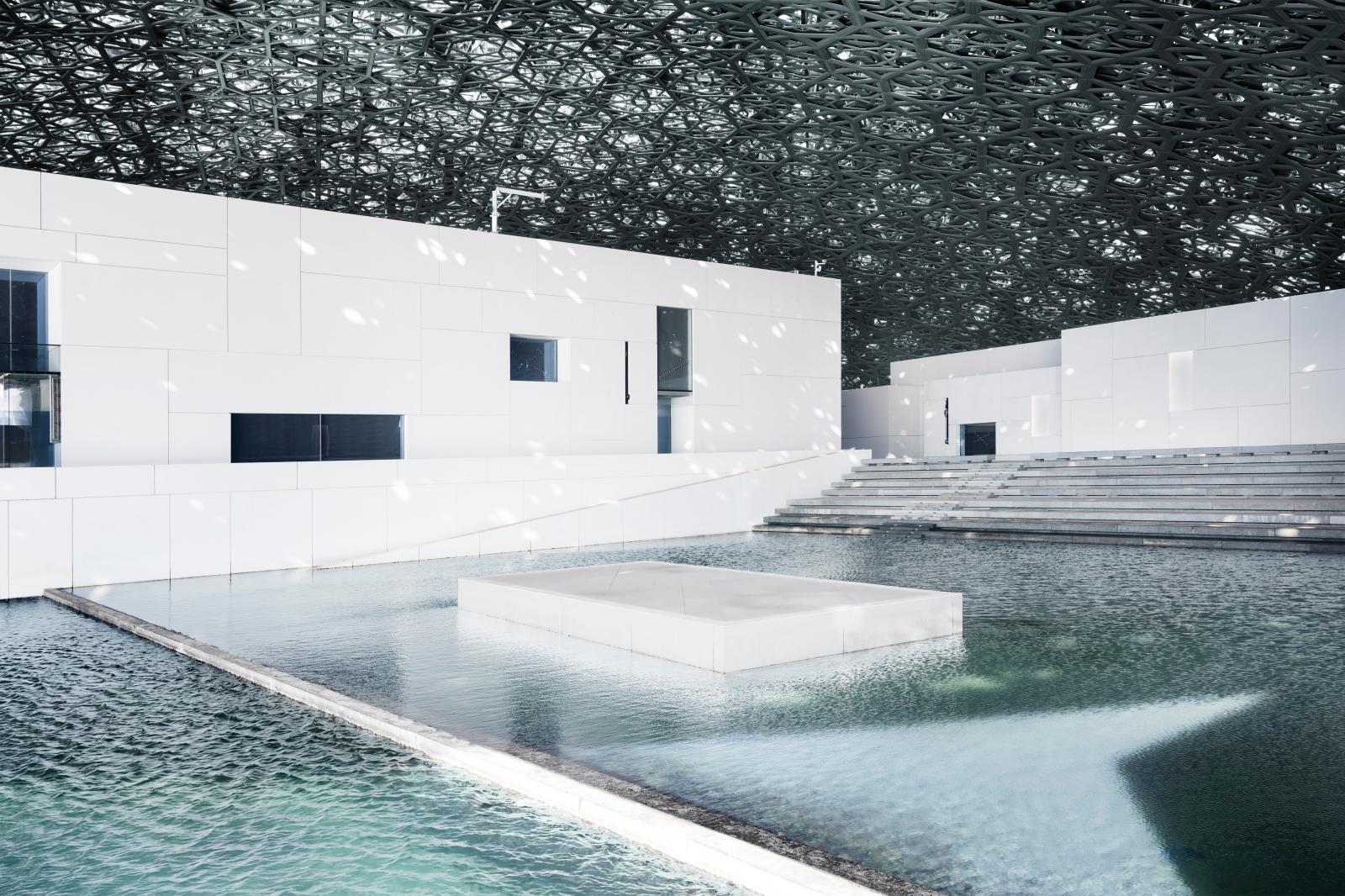 Ten years after the signing of the contract between France and the Emirates, the Louvre Abu Dhabi has opened at last. This project has certainly seen a few storms, in every sense of the word. Even at the opening, controversial mutterings could still be heard in the background. But they fell silent at the sight of Jean Nouvel’s impressive architecture and magnificent exhibition rooms. This unique complex of 55 buildings is imbued with light and intelligence and is undoubtedly one of the architect’s masterpieces. By day, reflections from the pools and the mirrors on Giuseppe Penone's bronze cherry tree dance over the white walls. By night, from the outside, under lighting which visitors will not have seen over the first few days, the dome resembles a saucer floating above the sand (one drawback, however, is that the grey color of the dome weighs down the aesthetic: in the computer-generated images, it was a pristine white). This time, on this little desert island, Jean Nouvel had the means – the space, the time, and undoubtedly the money – he needed for his project. At the opening, he reaffirmed his vision of a “humanistic architecture” combining modernity with the “local setting”. This “Arab village” (for a time, he even considered separating each gallery into houses) embodies that message to perfection. Hissa Al Dhaheri, the museum’s deputy director, hopes it will become a "focus for young people”. But this will be easier said than done, so long as this island – a long way from the center, with no public transport – retains its wasteland character. The garden that was supposed to be an extension of the museum is still a distant dream, the proposed housing projects have been suspended because of the financial crisis, and the prospect of other museums being built by star architects remains as uncertain as ever.

Cultural Crossroads
The complex designed by Jean Nouvel achieves the paradoxical feat of blending in with the seascape without being extravagant, while the expansive galleries inside seem like a Mesopotamian palace. The ceilings are five to eight meters high and each room is between 250 and 400 square meters. Laid out by scientific director Jean-François Charnier, the galleries open with a spectacular introduction, leading to a block with two heads from the Yarmukian period, excavated in Jordan after 8 millennia – heads that Picasso would certainly have appreciated. Showcases demonstrate how various civilizations interpreted funeral urns or the representation of the human face. In this way, through what he considers a maieutical approach, Jean-François Charnier hopes to introduce a “global narrative” through “comparisons” that lead us to “reconsider all knowledge throughout history”: a narrative he believes is missing in traditional museums. The circuit thus makes connections between artistic, industrial and technical revolutions. The Louvre's director, Jean-Luc Martinez, cites the example of bronze sculptures, which necessarily involve an exchange-based culture, because “nowhere in the entire world are tin and copper [the alloy required for casting] found in the same place.”  Decorative artworks predominate in galleries where vertical skylights illuminate the central displays. The undulations created work beautifully between incredibly diverse Western and Islamic artworks, which include sculptures, books, tapestries, screens and even prints and photographs: a beautiful piece of staging with a touch of coldness that sits well with the monumental style. The relatively emphatic lighting is designed vertically, which is not ideal for sculpture. At the time of the opening (though this may change), various notices and explanatory panels were missing. And the final room with contemporary works feels like it was somewhat tacked on at the last minute, as a token gesture. But these reservations do not detract from the sense that overall, this project is a real success.

Stunning Acquisitions
One of the keys to this success, played out during the last few years in secret behind the scenes, was to reorient acquisitions for the permanent collection. For example, the museum bought one of the oldest pages of the Koran, written a few decades after the death of the Prophet, a Yemenite Torah on blue scroll paper inspired by the Byzantine technique, a large Ottoman rug, and a magnificently painted sarcophagus from the end of the dynastic period of ancient Egypt. With representations of power, an “official” portrait of Washington by Gilbert Stuart, bought from the Hammer Foundation, is splendidly set off by a Syracuse Decadrachm. This engraved medal awarded at the Greek Olympic Games is signed by Euainetos, making it one of the earliest known works bearing an artist’s signature. Another discovery is a richly decorated 16th-century ceremonial helmet from a Turkish tribe of Ottoman-ruled Anatolia. It was sold at the auction of the Istanbul Imperial Arsenal in 1839, and the scientific team has uncovered a photograph showing it in the studio of Jean-Léon Gérôme, who lent it for the first Islamic decorative arts exhibition at the Louvre in 1903. He used it as a model for his famous painting of The Snake Charmer.

The museum has also acquired one of the oldest Chinese representations of a dragon (a hybrid of a panther, eagle and alligator) dating from the Warring States period. It belonged to the descendants of Adolphe Stoclet, who kept it in his Brussels mansion, designed and decorated by Gustav Hoffmann, Gustav Klimt and Fernand Khnopff. But the most extraordinary acquisition is probably a lion (see left) crafted in a Muslim metal workshop in around 1000, possibly in Andalusia. It appeared at Yannick Lintz’s exhibition on Medieval Morocco at the Louvre in 2015. Researchers have established a connection between this life-size piece and a griffin displayed until the 19th century as a trophy atop the cathedral in Pisa. This chimera was supposedly brought back from a conquest mission by Christian knights, possibly in the Balearic Islands. The lion has an image of the griffin on its thigh, and the lion is itself depicted on the griffin’s body. The origin of these two pieces remains a complete mystery, however. A mechanism was found inside the Abu Dhabi lion, which may have emitted a roar. The museum remains secretive as to the cost of these acquisitions, which have frequently involved millions of euros. Jean-François Charnier will say no more than that they were “within the budget”, set at €40 M per year. As pointed out by Jean-Patrice Marandel, chief curator at the LACMA in Los Angeles, these purchases do not necessarily impact Orientalist market prices, not least because of their variety. But they have been crucial to getting the project back on track, which focused for the first few years on creating the illusion of a collection based on the history of Western painting.