Lace is an intricate, openwork fabric without weft or warp featuring a wide range of techniques and motifs. Linen, cotton, silk, gold and silver thread are used to make this luxurious product, which is all the more amazing considering how complex the process is. 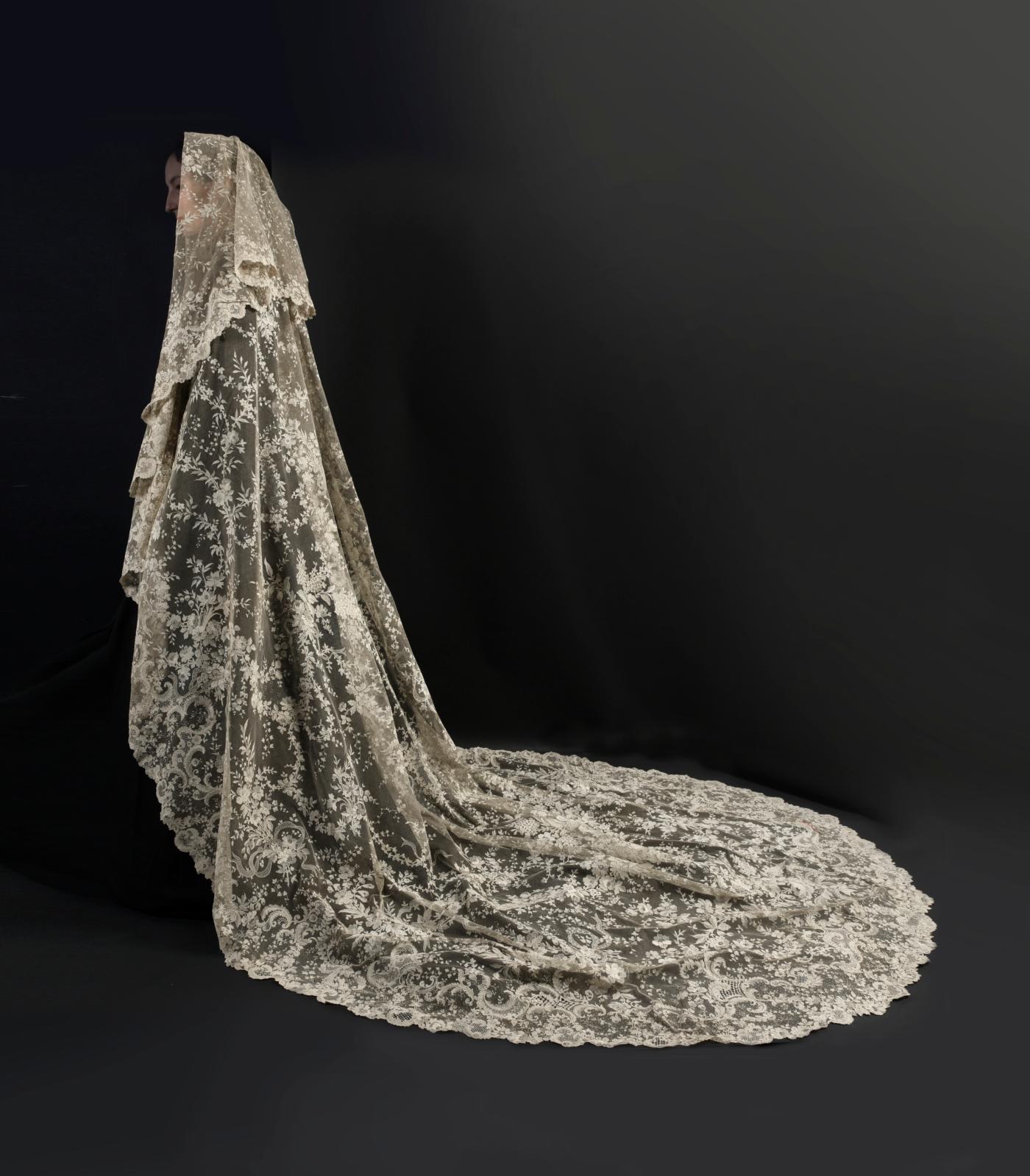 Perhaps because of its delicacy or the unobtrusive nature of its skill, lace is the great overlooked achievement of the Italian Renaissance. Evolving from embroidery, Venetian needle lace, which historians concur originated in the 16th century, was a sumptuous novelty that quickly charmed the courts of Europe. The arabesques, flowered scrolls and shadow and light effects of white lace are almost sculptural, setting the exceptional apart from the ordinary. While Louis XIV’s sculptors had enormous artistic respect for these refined details, it was not exactly the same for Jean-Baptiste Colbert, whose provisions concerning Venetian lace were based on a desire for competition rather than a taste for beautiful attire. In the 1660s he had around thirty Italian lace-makers brought to France with the aim of putting them to work in newly opened royal manufactories, where they would contribute their skills to create a home-grown industry. Competition led to the development of Point de France lace, which characterized the royal manufactories’ production of gloves, collars, cuffs and albs, on which foliage and garlands flourished during the 17th century.

Meanwhile, in Alençon, Madame de la Perrière (1605-1677) was painstakingly developing a technique that soon superseded Venetian lace. Peerlessly fine Alençon lace immediately won over wealthy bourgeois and aristocratic customers in France and abroad. People went into debt to buy this exquisite lace, which was handed down from father to son—for only men wore it until the 18th century. Swamped with orders, the Alençon workshop resorted to the specialization of tasks. Few workers mastered the complex technique, which was kept secret to increase the aura of lace.

Various Techniques
Lace is made on a temporary parchment support where the design to be reproduced is traced. The “trace” is the first step, delimiting the motif’s contours with a thread. Loops forming rows are attached to the thread, each row serving as a support for the previous one, the whole forming a ground of different shapes. Subtle cordonnets (a thread or small cord) enhance the network with reliefs. Shadows, forming the opaque parts of the lace, are obtained by filling, while "modes" are tiny star or rosette-shaped stitches created according to the lace-makers' imagination. Varying the technique and combining it with others led to the development of different stitches named after the cities where they originated, such as Point d’Argentan, prized by 18th-century Kings of France and Spain. Successive rows, knots and loops not found in bobbin lace characterize this type of needle lace.

Bobbin Lace
Bobbins with tapered handles, made of wood and sometimes bone or ivory, are used by lace-makers specializing in this art: a relative of trimmings. Unlike the needle technique, bobbins twist and cross the threads without ever knotting or looping them so that, fastened to the pillow (the support) only by pins, they are woven and embroidered at the same time. Black Bobbin Chantilly lace was famous at Versailles in the 17th and especially 18th centuries. Madame du Barry and Marie-Antoinette had their dresses adorned with yards-long ribbons of it. Nothing but the finest lace would do for shawls, stoles and umbrella and fan trimmings. Ecru and moiré “Blonde de Caen” lace rivaled its counterpart from Malines, one of the most famous and luxurious kinds of Flemish bobbin lace. A more affordable black or cream lace with geometric motifs was made in Le Puy-en-Velay.

By the 17th century, lace was no longer the prerogative of the aristocracy. Regional costumes, as well as queens’ handkerchiefs, were trimmed with lace, despite its being regularly banned by sumptuary laws based on moral considerations and Christian humility. François I, Henri IV, Louis XIII and Louis XIV repeatedly issued edicts but to no avail: people would rather pay a fine than do without lace. The Revolution wiped out its clientele. Under the Empire, only women wore lace, which faithfully followed fashion, as it did during the Ancien Régime. Lace-making was always women’s work, often done at home. Merchants employed a woman called a "leveuse" to deliver thread, cards, models and orders to homes, pick up the finished lace and pay the lace-makers.

Machine-made lace, invented in early 19th-century England, had a bright future, especially in Calais, but dealt a severe blow to craftswomen who sometimes took 25 hours to make a piece the size of a postage stamp. Inspired by mechanical processes, chemical lace appeared at the end of the century. The appeal of the new made people forget about the stiffness of modern lace, and low prices drove handicraft workers out of business. In the 20th century, old techniques, transmitted orally, nearly died out. In 1976 the Atelier Conservatoire National de la Dentelle du Puy-en-Velay (National Lace Conservatory workshop of Le Puy-en-Velay), attached to the Mobilier National (the French State archives of furniture) and the Atelier National du Point d’Alençon (National Point d’Alençon Workshop), was created on the initiative of President Valéry Giscard d’Estaing. In 2010 Unesco listed lace as an Intangible Cultural Heritage of Humanity, hallowing this almost forgotten art of many forms whose intricate, complex production methods are too often poorly known.

WORTH SEEING
The lace collections at the Musée Baron-Gérard in Bayeux
and Musée des Beaux-arts et de la Dentelle in Alençon,
and lace-trimmed costumes at the Palais Galliera in Paris.

Birkin by Hermès: Business Is in the Bag

In the 12 th century, the Japanese art of "ink floating on water"…