Renowned since 1830, Poursin is one of the oldest manufacturers in Paris and the last one in France still making buckles—a guardian of 19th-century craftsmanship that equips luxury leather goods, the Republican Guard, the Cadre Noir de Saumur French National Riding School and many other prestigous institutions. 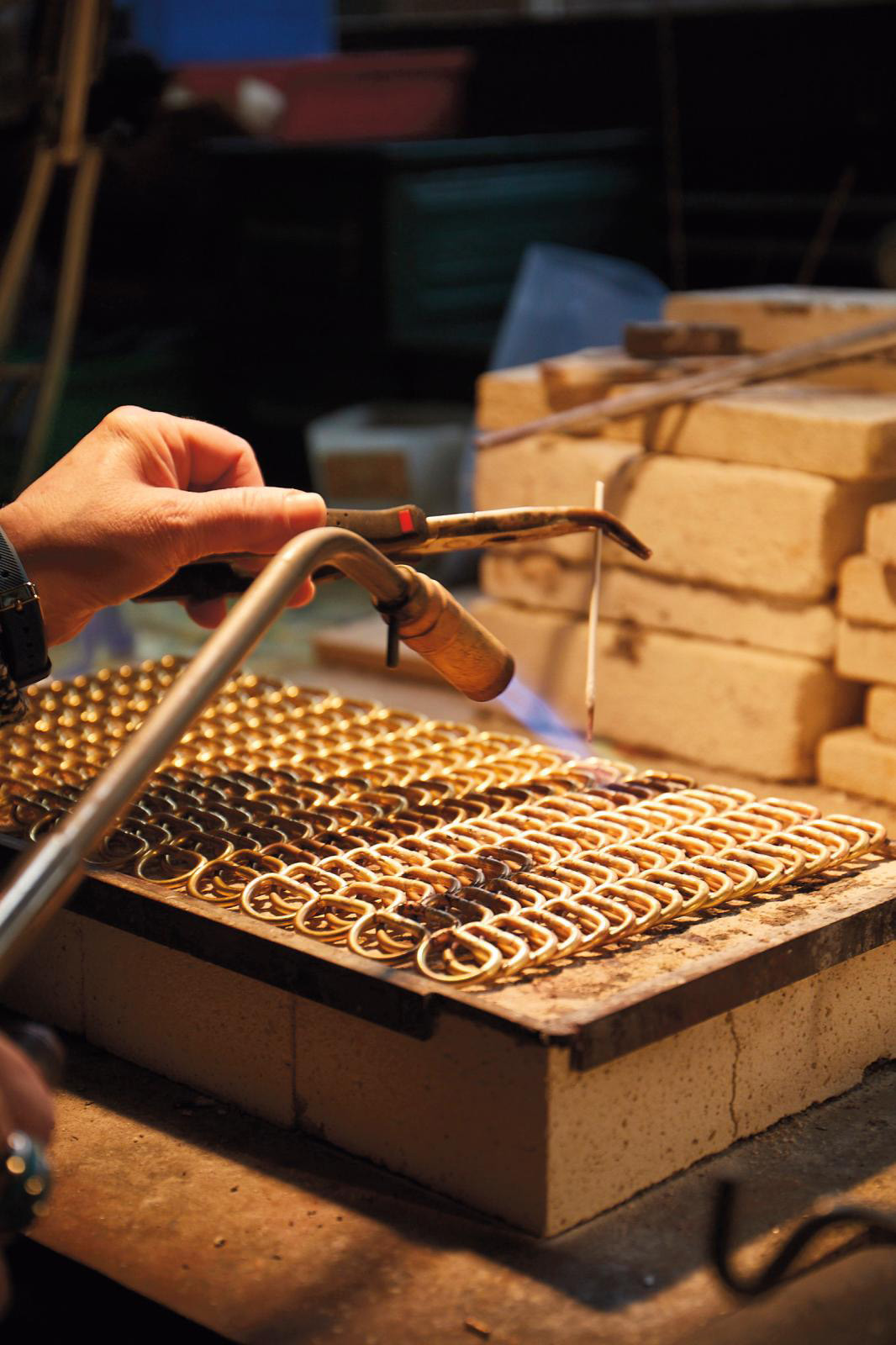 Soldering in the workshop
© Jimmy Mettier

Soldering in the workshop
© Jimmy Mettier

Its prestige is as unbreakable as the material upon which it is based: brass, which Poursin has raised to the rank of a work of art. Its quality is well known by those who appreciate fine workmanship. Many people come to its shop at 35 Rue des Vinaigriers in search of beautiful hand-crafted belt buckles, rosettes, chains, buttons, clips, rings, stirrups, spurs or clasps. The biggest names in luxury and fashion, from Saint Laurent to Lanvin, Courrèges, Isabel Marant and Jacquemus, often stepped across its threshold to find the metal accessory that changes everything. It is the only place of its kind in Paris.
Yet in 1890, nothing hinted that the small family business was destined for such a bright future. The workshop, which in 1830 belonged to a certain M. Leclerc, started out by making buckles for harnesses, then specialized in pieces for hitching and equestrian tack, its flagship products being Napoleonic cartridge belts and ornaments for royal carriages. Its "cast-metal articles for saddles and harnesses" won many awards at universal exhibitions. After the horse-drawn carriage disappeared, Poursin extended its know-how to upscale leather goods and offered a range of metal pieces, including the famous brass buckle, both functional and ornamental. In the early 1950s, André Poursin, assisted by his son Jacques, diversified the offer and put saddlery at the service of leather goods. The brass models designed for bags thus combine the useful with the beautiful, the sturdiness of hitching parts with the subtlety of fashion accessories. The fourth generation, Olivier and Jean Marc Poursin, arrived in the 1980s. When horse-riding as a leisure activity reappeared, the harness trade gradually rose from the ashes. But the bright spell was short-lived. By 2016 the company was on the brink of bankruptcy. That is when Karl Lemaire came riding in like a knight in shining armor. An ardent advocate of “made-in-France”, he rescued Poursin—and its 60,000 catalog references—in the nick of time.

Mr. Lemaire undoubtedly had the right hunch at the right time: metal accessory wholesalers were leaving Paris in droves. Moreover, it was not his first foray into this field. "Poursin,” he says, “is the oldest buckle-maker in France and the last one still in Paris. In 2016 they remembered me because I’d already taken over the company founded by G. Daudé, who invented the metal eyelet, rivet and press button. I was told that the employees were going to be let go and the machines moved to the North. I stepped in three weeks before the business was set to close down for good, and the commercial court entrusted me with the heavy and magical responsibility of preserving this living heritage. I made a gentleman’s agreement with the Poursin brothers, promising to carry on with the brand and workshop, which I kept as is."

Keeping Memory Alive
Seen from the outside, the green shopfront hardly looks inviting. Nobody would suspect what lies hidden behind the somewhat forlorn-looking window: an incredible treasure trove of accessories. Hundreds of wooden boxes and racks bursting with various models form a décor worthy of Jean-Pierre Jeunet. Buckles, clips, clasps, stirrups, rings, rivets and other brass parts intended for harnesses or luxury leather goods make up most of the treasure. Upstairs, an amazing array of dies, punches, cast-iron molds, initial plaques, vintage posters, archival documents and ledgers bearing the signatures of the greatest French couturiers are worthy of a museum collection.

Back on the ground floor, we are in the inner sanctum: the 600-m2 workshop, which looks the same as it did in 1890, with its period clock, Jieldé lamps, spools of brass wire, Crimar presses and two Baird machines from the U.S. that Americans set up here in order to make their own material and sold in 1919. Greased and maintained on a regular basis, they could easily start working again tomorrow. Here, the gestures of yesterday are still those of today and hand-craftsmanship has drawn lessons from the industrial era. The casting and foundry operations take place outside Paris, but the pieces are still finished, the wires still bent and assembled, the buckles still soldered, polished, gilded and varnished in the workshop in Rue des Vinaigriers. "Buckle 248, our most prestigious model, is made entirely by hand in our workshops,” says Mr. Lemaire. “The brass is cut, shaped and welded on-site, and it takes no fewer than 19 operations to achieve the final result. The Jironde and Jonie buckles are polished by hand, giving them a smooth and ‘dressy’ look, while others are polished with ball bearings for a more vintage effect. There are also two kinds of finishes: nickel-plated or varnished gold. The soldering is also done by hand. Our workers are very attached to their tools and machines. It’s almost as if they become one. Nothing is digital. Everything is made the old-fashioned way… You can still come here and see the employees working, without going on the Internet," he says.
Beneath the workshop’s vast glass skylight, it is like stepping into another time. Workers are busy bending brass wire according to the desired shape—square, rectangular or oval—, soldering with solid silver, stamping, degreasing parts in barrels filled with sawdust, pressing and assembling bars and prongs on previously soldered frames. Tools and hands work together. The prong—that little pin that slips into the belt hole to close it—is made on a 19th-century machine. "Poursin’s trademark is the prong, recognized by its curved, a rather sensual shape and beveled end—which is why connoisseurs say it caresses the leather without scratching or damaging it. Each prong has its assembly tool, each buckle its die, each machine its worker. Every step of the production process has remained the same since 1890. Even the simplest of buckles can require up to 17 operations." Here, whether for horse-drawn carriages or handbags, metal accessories must stand the test of time. The number-one alloy, brass, lasts forever. It does not rust and is 100% ecological—a plus for the environmentally-minded times we live in.

Birkin by Hermès: Business Is in the Bag

Père Lachaise: An Unlikely Source of the “Manif”
Newsfeed
See all news
Soissons' Cathedral of Saint-Gervais-et-Saint-Protais Gets Its Rose Window Back by the End of the Year
Ancient Egyptian Road, Buried for Centuries, Uncovered in Lavish Ceremony
The Mystery Behind This Chinese Painting, About to Go Under the Hammer
Finalists of MAXXI Bulgari Prize Announced
Not to be missed
Analyses
Hélène Henry: Textiles in the Jazz Era
The Villa Noailles is dedicating a historical exhibition to this…
Analyses
An Appropriately Monumental Book for the Prodigious…
The publishing house Taschen has dedicated a book to the Italian…
Analyses
Cartier Explores the Art of Islam and Beyond
A new exhibition at the Musée des Arts Décoratifs (MAD) in Paris…
Analyses
Royal Animals and Political Beasts During the…
They were everywhere: gardens, menageries and even the private apartments…