Josephine and Napoleon I reigned as a power-couple, keenly attuned to the importance of image building to stake their claims to sovereignty. Both descendants of impoverished noble families, they purchased La Malmaison, a manor house and garden, to establish themselves as leaders of Post-Revolutionary France. 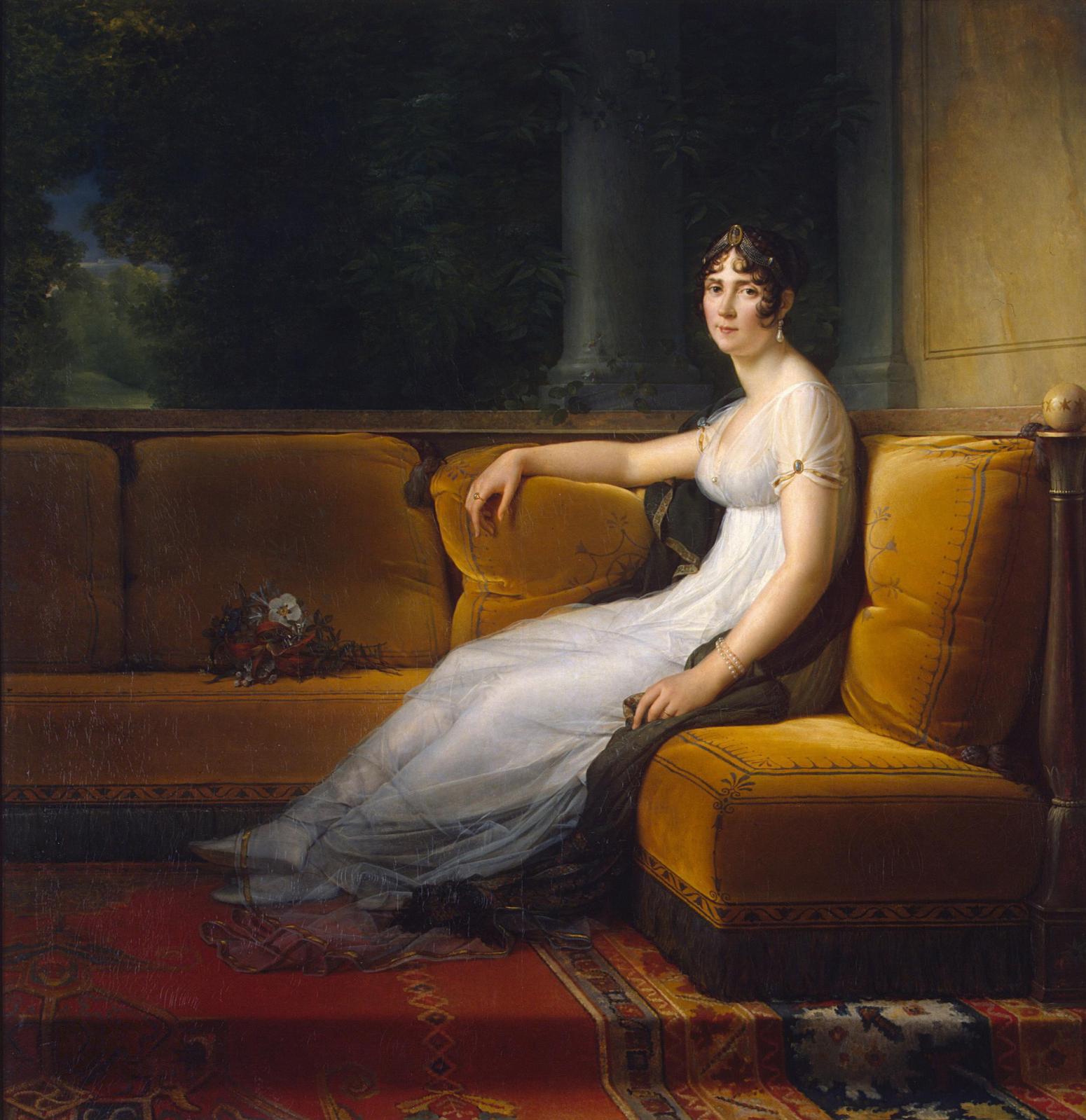 Napoleon Bonaparte, in a letter penned to Marie-Josèphe Rose Tascher de la Pagerie, whom he famously called Josephine, declared “Sweet and incomparable Josephine, what an extraordinary influence you have on my heart” a confession that he continuously affirmed until her death in 1814. After a whirlwind romance, they married in 1796. Napoleon crowned his wife Empress is a singular masterly confirmation of his dedication to her 1804. Five years later, Napoleon was forced to repudiate the love of his life who, at the age of 46, could not provide an heir to the Imperial throne, but allowed her to retain her title as Empress until her death in 1814.

Establishing a Country House
During the Consulate, the French government from 1800 until 1804, Napoleon, as First Consul, expressed his desire to own a château. Josephine coveted La Malmaison, a country house located seven miles outside Paris. Built in the 1680s, the house resembled an elegant manor surrounded by a garden and working farm. When Josephine visited the property in 1798 she realized the potential to create an exceptional estate and landscape garden.  She secretly negotiated its purchase in April 1799 whilst her husband was attempting to conquer Egypt. Upon his return, Napoleon accepted his wife’s negotiation as a fait accompli, paid for the house, and Malmaison became their country retreat. Josephine obtained sole ownership of Malmaison after the divorce, an exceptional status for women at that time.

When Josephine purchased Malmaison, the former owners, the Le Couteulx family, had already begun to trace a fashionable landscape garden, but Josephine had greater ambitions for her estate. At first, she acceded to her husband’s desires that the architectural team of Charles Percier and Pierre Léonard Fontaine renovate the house, updating the neoclassical façade with a special vestibule, designed to recall a tent, alluding to Napoleon’s military victories in 1801. She then commissioned the highly talented landscape designers, Jean Marie Morel (1728-1810) and Louis Martin Berthault (1770-1823), to realize her desire to have a serpentine river unify the space so that she could sponsor pleasurable boat rides. Whether boating or promenading, visitors viewed a Doric revival temple, commissioned by Josephine, as well as statues and a number of antique vases that she selected from the Imperial collections. In addition, she bought properties to the north and west of her pleasure garden to accommodate an extensive sheep farm and a diary with a small herd of Swiss cows. She aggressively expanded the property from 63 to 770 hectares (1, 794 acres), creating one of the most extraordinary gardens of the first half of the nineteenth century. Today, the house is a national museum surrounded by a 6-acre garden.

Botanical Collecting and Imperial Aspirations
One of the most impressive aspects of Josephine’s garden patronage was her interest in collecting and acclimatizing plants from around the world to her garden. She imported American species and flowering shrubs, such as the magnolia, whose sweetly scented flowers inspired memories of her native Martinique. While it is tempting to imagine that Josephine's interest in exotic trees was inspired by a nostalgia for her native Martinique, in fact, she collected plants from around the world. For example, Josephine underwrote Nicolas Baudin’s exploratory voyage to Australia, then known as New Hollande, that both Josephine and Napoleon hoped would result in the renaming of the territory as Terre Napoleon. When François Péron and Charles Alexandre Lesueur published their discoveries, in a magnificent atlas, Voyage de Découvertes aux Terres Australes exécuté par L’ordre de S.M. L’Empereur et Roi, Partie Historique rédigée par François Péron, Atlas par Charles Alexandre Lesueur et Nicolas-Martin Petit (Paris : Imprimerie Royale, 1811)  they drafted a frontispiece that depicted plants and animals from the Pacific that they brought back to France, including black swans, that she acclimated to Malmaison. Josephine and Napoleon’s ambitions to conquer Australia, inspired by centuries of colonial practices and fueled by a desire to improve French agronomy, collapsed with the fall of the Empire in 1815.

The Empress of Flora: Josephine’s Roses
Josephine commissioned an extensive greenhouse in 1803-1805 which measured over 50 meters (164 feet) long in the most innovative iron and glass technology and was heated by three stoves. Her greenhouses were larger and taller than the existing hot houses at the Jardin des Plantes, the national botanical gardens in Paris. By March 1804, 2,014 plants, trees, and shrubs were delivered to Malmaison, and, as the inventory after Josephine’s death reveals, the number of plants increased to the thousands during her ownership.  Although well known and respected amongst an international circle of naturalists, Josephine guaranteed the fame of her garden through her patronage of the artist Pierre-Joseph Redouté. Redouté illustrated luxury folio volumes for Josephine, Le jardin de la Malmaison (The Garden of Malmaison) (1803) et the Description des plantes rares cultivées à Malmaison et à Navarre (Description of the rare plants cultivated at Malmaison and Navarre) (1813) carefully documenting the plants grown under her stewardship. Redouté’s masterwork, a series of engravings dedicated to Josephine’s namesake flower, Les Roses (1817-1824) recorded almost 200 species that were grown in her gardens. Josephine may have grown over 500 varieties popularizing the breeding of roses throughout France. Many of her roses were cultivated in pots in the greenhouses and then placed in the gardens in the spring and summer months; she did not design a rose garden which we now enjoy at Malmaison today.

Even as her divorce became inevitable in 1809, Josephine continued to assert her desire to disseminate of new plants when she wrote: “It makes me quite happy to see plants from abroad flourish in my garden. I hope that Malmaison soon will be a rich resource for all the departments…I am having innumerable trees and shrubs from the southern hemisphere and North America grow here. I should like every department in ten years’ time to possess a collection of valuable plants from my nurseries.” Thanks to Josephine’s collecting, several of the most appreciated flowers and shrubs that flourish in France today, such as the gardenia, hydrangea, eucalyptus, magnolia grandflora, geranium, hibiscus, and mimosa, were first acclimated at Malmaison.