Lead crystal crowned centuries of research and experimentation. English glassmakers at last managed to produce a material as translucent as rock crystal, but the prowess of French crystal manufacturers outstripped their success. 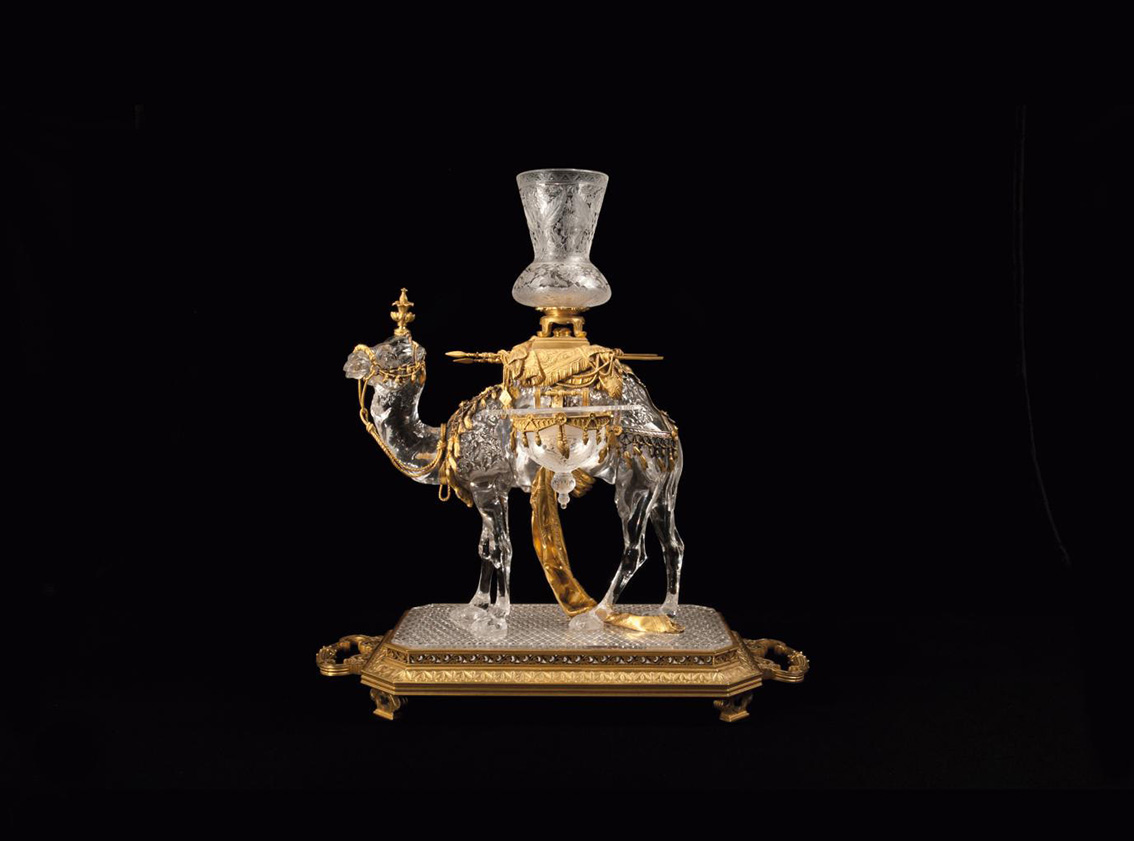 A restriction more than perseverance made England the first genuine crystal producer. In 1615 King James I decreed that only the Royal Navy was allowed to use wood, advising his subjects to burn coal for their needs. Glassmakers were not exempt. They had to change their glassmaking recipes and find a molten material suitable for the new fuel. After several attempts resulting first in flint glass, in 1674 George Ravenscroft added and patented lead oxide, which gave glass a unique gleam and ring. For there is a fundamental physiochemical difference between them: glass is an amorphous solid with an irregular atomic structure, whereas crystal has an ordered one.

In a few years, English crystal manufacturers surpassed their counterparts in Venice and Bohemia, although it took another century to perfectly purify crystal—and almost as long before French crystal manufacturer Saint-Louis became the first to pierce the English secret in 1781. Aimé Gabriel d'Artigues, the company’s director from 1791 to 1795, perfected lead crystal before taking over Baccarat in 1816. By the early 1830s, both houses produced only crystal. They were not alone: many crystal works sprang up in Ile-de-France. Saint-Cloud, Clichy and Bercy stood out, although they could not rival Saint-Louis and Baccarat, which, at one point, joined forces to stifle the competition.

Increasingly Spectacular Pieces
In the 1820s and 1830s, manufacturers emphasized lead crystal’s specific qualities and deep, elegant cuts that could magnify the refraction of light. earlier in the century, Marie Desarnaud was the first to combine crystal with gilded bronze at his shop, L'Escalier de cristal (The Crystal Staircase). This became so popular that in 1819 the Duchess of Berry commissioned Desarnaud to make an exceptional dressing table for her. Following trends in the decorative arts, the designs were borrowed from Renaissance, medieval and baroque forms.

The competition was fierce. Companies vied with each other to see which one could make the most spectacular piece. In 1851, the Great Exhibition in London astounded crowds with the glass and cast-iron Crystal Palace, designed by Joseph Paxton, housing a crystal fountain by Follet & Clarkson Osler. It took four tons of crystal to make this feat, which stood nearly eight meters or 26 feet high. That was almost routine for Osler, which exported furniture and glittering monumental pieces to India even before opening a shop in London. In 1860, Baccarat followed and then surpassed Osler. By the 1880s, exports accounted for over half its output, with prestigious customers like Czar Nicolas II and the shah of Persia.

Saint-Louis had the best command of advanced coloring methods and enriched them until obtaining a remarkable palette, giving Bohemian glass a serious run for its money. Its sulphides became highly prized items, later collected by Colette and Jeanne Lanvin. The Bercy crystal works (1827-1867) seems to have been the only one capable of offering two-tone opalescent crystal with single or concentric rings, a much sought-after feat today. All the French crystal-makers produced monochrome opalescent pieces.

A Bit of Mystery
At the turn of the 20th century and in the 1920s, crystal easily took Art Nouveau and Art deco forms. In 1945 Lalique specialized in contrasts between clear and frosted crystal, even making it an immediately identifiable hallmark. Daum, founded in 1878, was not to be outdone: in 1968 it developed a crystal paste by mixing clear or colored waste glass, cold-molding it and vitrifying it in a furnace. This extremely complex process borrowed from the lost-wax technique and is shrouded in a bit of mystery: the crystal-maker never knows what the final color will be—it is revealed only after several days of firing. Daum is now the only company able to create these unique sculptural works.

Outstanding craftsmanship and fruitful collaboration with artists from Jacques Adnet to Damien Hirst and Arman have helped french manufacturers raise crystal to the rank of a noble, multifaceted material. It would be a shame if it were limited to tableware.

Worth Knowing
The crystal in the Museum of Decorative Arts, Paris 1st
madparis.fr

S is for Stained Glass
Newsfeed
See all news
Soissons' Cathedral of Saint-Gervais-et-Saint-Protais Gets Its Rose Window Back by the End of the Year
Ancient Egyptian Road, Buried for Centuries, Uncovered in Lavish Ceremony
The Mystery Behind This Chinese Painting, About to Go Under the Hammer
Finalists of MAXXI Bulgari Prize Announced
Not to be missed
Glossary
S is for Stained Glass
In the 6th century, colored glass made an appearance in various…
Glossary
M is for Mother-of-Pearl
In the sixth century, its iridescent nuances were already enlivening…
Glossary
A is for Azulejos
Unlike what might be commonly thought, azulejos take their name…
Glossary
M for Marbling
In the 12 th century, the Japanese art of "ink floating on water"…