At Château Rambouillet: Shells and an Exclusive Estate

An enchanting venue loved by the Kings of France, the Rambouillet estate is home to many treasures, including the recently restored Shell Cottage. Another chapter of history ripe for rediscovery. 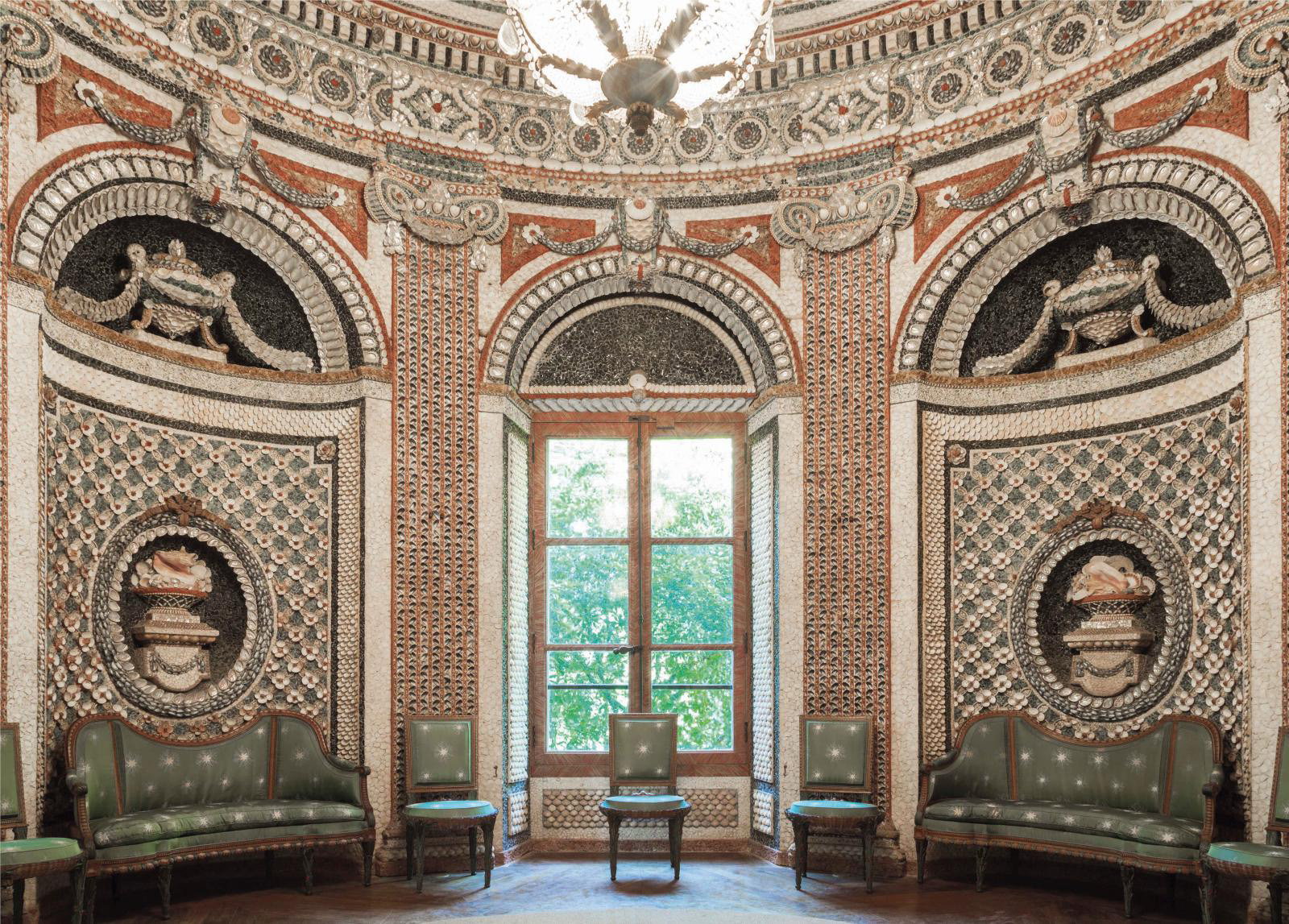 The "hunting grounds" of Rambouillet attracted prominent monarchs in French history over several centuries, including Charles VI, François I, Louis XIV, Louis XV and Louis XVI. Lying 50 km (31 miles) from Paris on the edge of a forest, the château belonged in turn to the Regnault d'Angennes family, Fleuriau d'Armenonville, the Count of Toulouse—then his son—and the Duc de Penthièvre, and was finally bought by the king himself in 1783. The first building was constructed in 1345. Its most important feature, the François I tower, is still standing today. It underwent numerous transformations and extensions over the centuries. The various periods are reflected in the interior decoration: the architecture of King François I's bedroom, the marble room dating to Henri II's time; the elegant wood paneling of the Appartement d'Assemblée dating to the period of the Count of Toulouse—"the finest in the kingdom during the 18th century," to quote Isabelle de Gourcuff (administrator of the Rambouillet estate since June 2021); the Delft earthenware bathroom; the Emperor's apartment (whose restoration is scheduled for this year), with its bathroom in the Egyptian revival style, and the furnishings in the apartments for foreign heads of state designed by the architect Jean Pascaud for President Auriol (French President from 1947-1954). These decorations, combined with the splendid furnishings supplied by the Mobilier National, provide a sumptuous setting for this truly magnificent royal residence.

For many years a presidential summer residence, used for hunting, Councils of Ministers and the reception of foreign delegations, the estate was handed over to the Centre des Monuments Nationaux (Center for National Monuments, CMN, ) in 2009 to be opened to the public. "Rambouillet is a gem that deserves our attention," says the new administrator, who wants to create an atmosphere that does justice to the château, bring back the collections and change the visitor's route. "My role is to awaken this Sleeping Beauty!" An exhibition illuminated the château during the Christmas season. Until March, "Fantaisies pour un palais" ("Dreams for a Palace") offers visitors a chance to revisit the marvelous decorations inspired by 18th-century fairy tales. The charm of the estate also lies in its gardens. The Duc de Penthièvre commissioned a landscape gardener (whose name is now lost) to create an English-style garden bordered by formal French layouts and canals radiating from the château in a fan shape. An undulating 25-hectare (nearly 62 acre) park with winding rivers, huge meadows and forest paths led to masterpieces of picturesque and pastoral architecture: a hermitage, an artificial rock grotto and the famous shell cottage: a delightful place where visitors would happily linger to savor "the pleasures of life" evoked by the French statesman and diplomat Talleyrand.

The Refinement of a Thatched Cottage
Originally, this small building was a gift for the Princesse de Lamballe. A close friend of Marie-Antoinette, who became her First Lady in Waiting in 1774, and who was considered the very embodiment of goodness by her entourage, the princess met a tragic fate in 1792. Married at 17 to a prince of royal blood—and notorious libertine—she had never met,  she was left a childless widow at 19. Her father-in-law, the Duc de Penthièvre, was reputed to be the richest man in France at the time and spent most of the year in Rambouillet, far from the splendor of the Court, as did his beloved daughter-in-law. Anxious to distract her, he commissioned the architect Jean-Baptiste Paindebled to build this thatched cottage decorated with shells in 1779. Preceding the Queen's Hamlet in Versailles by a few years, this cottage illustrated the return to nature in vogue during the last years of the Ancien Régime. Lying in the heart of the English garden on a small island reached by a stone bridge, the cottage looks like a simple peasant house. But when you enter it, "everything is a surprise". Laid out on a square plan, the interior is circular, and the rusticity of the exterior contrasts with an image of ideal refinement, typical of the Age of Enlightenment. The decor, worthy of a fairy tale, consists entirely of shells mingled with mother-of-pearl, glass paste and metal in airy stylishness. Iridescent shells from Dieppe and the Seine, mussels and shells from the Caribbean are fixed with small nails to all the walls. The mirror over the fireplace, made of shimmering mother-of-pearl, was designed "to spare the princess from an unfortunate meeting with her own image," says Isabelle de Gourcuff. For it seems she was disfigured by the marks of a venereal disease that lead to the death of her faithless husband a year after their marriage. Two secret doors lead to a wardrobe in which two automatons, emerging from a mirror, offered the princess and her ladies accessories to perfect their toilette during a break in the garden. The sophisticated interior design featuring birds and flowers expresses all the charm of the end of the century before the Revolution erupted. The princess was able to admire and enjoy it from 1779 to 1783, when Louis XVI bought the estate.

History of a Royal Dairy
To welcome its ever-more numerous visitors, the Centre des Monuments Nationaux (CMN), which has been managing the National Estate of Rambouillet since 2009, now organizes combined visits to the thatched cottage and the Queen's Dairy Farm. Near the estate, the king had another folly built for Marie-Antoinette in 1785: the Queen's Dairy Farm. It was a self-serving gift: Louis XVI hoped to persuade his wife to spend more time near the forest where he hunted game. But it was a lost cause… "The queen only came six or seven times," says Isabelle de Gourcuff. However, the king lavished money on it, entrusting the project to Hubert Robert and Jacques-Jean Thévenin, the estate's architect. Inspired by antiquity, the building was based on a Greek temple and reflected Rousseau's ideal of a return to nature. The first room was used for tasting milk in delicate Sèvres porcelain. In the second room, an artificial grotto with fountains was created, where the milk was set to cool, with, in the center, a white marble sculpture by Pierre Julien of the nymph Amalthea, goddess of mother's milk, accompanied by the goat that fed Zeus. "The plaque above the dairy entrance was found in the early 2000s, buried in a manure yard, along with about forty firebacks from the château," says our guide. "We think they were hidden to save them from looting during World War II." After the Revolution, Empress Josephine fell in love with the dairy farm. An apostrophe was added to the "l" as part of an effort to rename "la laiterie de la reine" (The Queen's Dairy) into "la laiterie de l’impératrice" (The Empress's Dairy). But the modifications were not retained in the restoration of this architectural jewel, where it is tempting to stay for a leisurely tasting session.

Will the Choiseul Snuffbox Soon Join the Collections of the Louvre?
Not to be missed
Cultural Heritage