The palatial mansion on Place de la Concorde in Paris has just opened to the public after years of controversy and a painstaking restoration campaign. The result is a journey halfway between poetry and scientific rigor, underpinned by a completely new system of financial management. 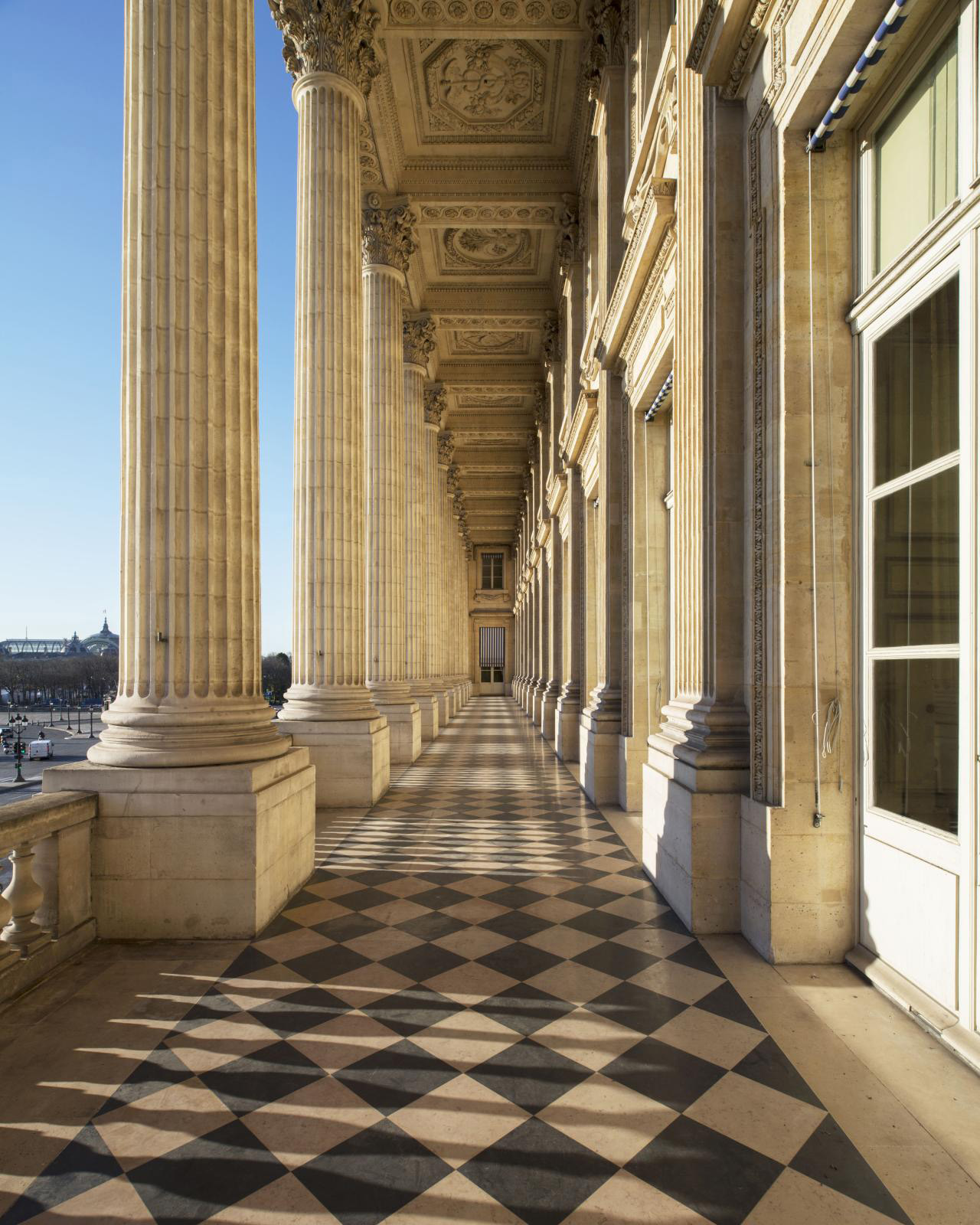 The Hôtel de la Marine (Headquarters of the French Navy) has found its home port. The former Garde-Meuble de la Couronne (Furniture Storage for the Crown), built by Ange Jacques Gabriel (1698-1782) for King Louis XV between 1758 and 1774 on what would be the future Place de la Concorde, has been adrift over the past ten years at the whim of political, economic and even diplomatic currents. Its future has been constantly invented and reinvented since it was announced in 2011 that the Naval Headquarters would move to the "French Pentagon" at Balard, the new site of the French Ministry of Defense in the 15th arrondissement. In a response to the public outcry, after a discreet attempt to sell the building via the France Domaine website, a plan for the site to be run by private promoters (including the Allard group), an idea to join the site with the Louvre and a short-lived project seeking to create a major venue promoting French gastronomy, the State decided in favor of the CMN (Center for National Monuments) to take over the site.

Since nearly all the original fixtures and fittings are still intact, it was clear the project should be heritage-focused. However, there was an issue of identity for this remarkable building that had not only housed the king's finest collections of furniture and wall hangings but was also a teeming creative hub, with workshops overseen by two Intendants of the Crown (high ranking administrative officials), Pierre Élisabeth de Fontanieu and Marc Antoine Thierry de Ville-d'Avray. The building also holds further historic importance as it was the site where witnesses had watched Louis XVI's execution from its now-iconic colonnaded terrace and where Marie-Antoinette's death certificate was signed in the boudoir. In keeping with its royal past, the mansion became the headquarters of the Ministry of the Navy after the Revolution. It was equally the scene of Napoleon's lavish celebrations for his coronation as Emperor in 1804, and his marriage to Marie-Louise in 1810. The act of abolition of slavery was also ratified there in 1848. But what, we might ask, remains of this history and the building commissioned for the glory of a popular king nicknamed the "Beloved"?

In Search of the Original Furniture
The original fixtures and fittings encapsulating the decorative arts from Louis XV to the Empire were unharmed during the two centuries of the building's occupancy. The surveys from the veritable archeological excavation revealed that 80% of the 18th-century paintings and paneling that lay beneath six to eighteen layers of paint had survived. The achievement of this €130 M project has been to revive the apartments of the two Garde-Meuble Intendants with both scientific rigor and a poetic touch. This taste for authenticity gave rise to lengthy discussions. Interior designers Michel Charriere and Joseph Achkar had one aim: to bring the 18th century back to life. But the CMN teams advocated historical and factual certainties: appealing to people's fantasy was not as important as positioning the right furniture in the right place, even if it meant sacrificing overall elegance and ruffling the established perception of that period.

Although all the great institutions, including the Louvre, the Mobilier National, the Sèvres Manufactory and the Versailles estate, went through their collections with a fine-toothed comb to find furniture once housed in the Hôtel de la Marine, the exercise had limited results because of the vagaries of history. "It would have been a shame to obey purely scientific constraints, whereby if the original piece of furniture no longer existed or was not available, like the Ville-d'Avray bed now in the Museum of Fine Arts in Boston, we would not have put anything in its place," says Delphine Christophe, CMN's director of the conservation of monuments and collections. "So we decided to use equivalent pieces wherever possible. This led to some small miracles. The heirs of the de Ville-d'Avray family loaned us the Intendant's personal objects, including a casket decorated with portraits of the couple: a present from the king. Then a commode, the first commission given to Jean-Henri Riesener (1734-1806), the future cabinetmaker to the king, reappeared on market and is now restored to its original place."

A Hybrid and Even Disparate Project
The hunt for the original furniture continues. The curators are pinning their hopes on other pieces: consoles or bergère chairs that might resurface and hopefully return to their original spots. To add to this patrimonial journey through time, the 19th-century salons, which were altered only minimally by the Ministry, are receiving major—not to say impressive—didactic material. The exhaustive content has the merit of broadening the historical focus from daily life at the Garde-Meuble de la Couronne to the development of the Place de la Concorde and the figures who lived there, including ten remarkable French seamen. The ambition is laudable, but its realization less so. Designed by the Moatti-Rivière agency as a nod to "the brilliance and glory of the 18th century," this digital set-up disrupts the overall balance, invading the space and the decor with three ostentatious screens almost as voluminous as the old cathode ray TVs. This is a somewhat surprising decision, given that all the appearances of 21st-century interventions and technology has been concealed, even the security and safety systems—nor is there any direct light so that the atmosphere can work its magic.

So it seems that this patrimonial showcase of unprecedented scope, due to open in June, has spawned a hybrid and even disparate project. The historical spaces represent barely more than a tenth of the total area of the site—over 12,000 sq meters/129,166 sq feet. In addition to hosting the Naval Academy, a public institution overseen by the Ministry of Armed Forces, and the headquarters of the Foundation for the Memory of Slavery, there is the Al Thani collection, which has genuine artistic and historical interest, but less obvious coherence with the building—apart from a resounding €20 M in sponsorship from the Qatar family. This is the crux of the matter: the financial burden of a project like this and its recurring needs have forced the CMN to devise a new management model. The reception areas, covered by a magnificent glass roof of beveled mirrors designed by architect Hugh Dutton, are open to the public. Starting this summer, part of the first floor will be occupied by commercial activities: shops, a bookstore, a café and a restaurant (where star pastry chef Christophe Michalak officiates), all of which will be operated under concession by the events group Moma.

A Financial Model to Keep an Eye On
The real innovation of this asset management model lies in the inclusion of companies' economic fabric in financing cultural heritage conservation. For a minimum of twelve years, the Morning Coworking company will rent 6,000 sq m/64583 sq ft on the second, third and fourth floors for €650 to €850 per sq. m. This provides the means for the establishment to pay all or part of the installments for the 30-year €80 M bank loan taken out to finance the renovation work. Only receiving €19.5 M in public funding, the Hôtel de la Marine represents a first, which should provide a lesson for similar projects. In the same vein, the future Cité Internationale de la Langue Française, at the Château de Villers-Cotterêts, is planning a distinct division between in-depth cultural heritage tours and economically efficient areas.