His father made their name famous throughout the world. Benjamin Steinitz, one of the last top dealers in the French 18th century, recently moved to Rue Royale to refocus his activity. 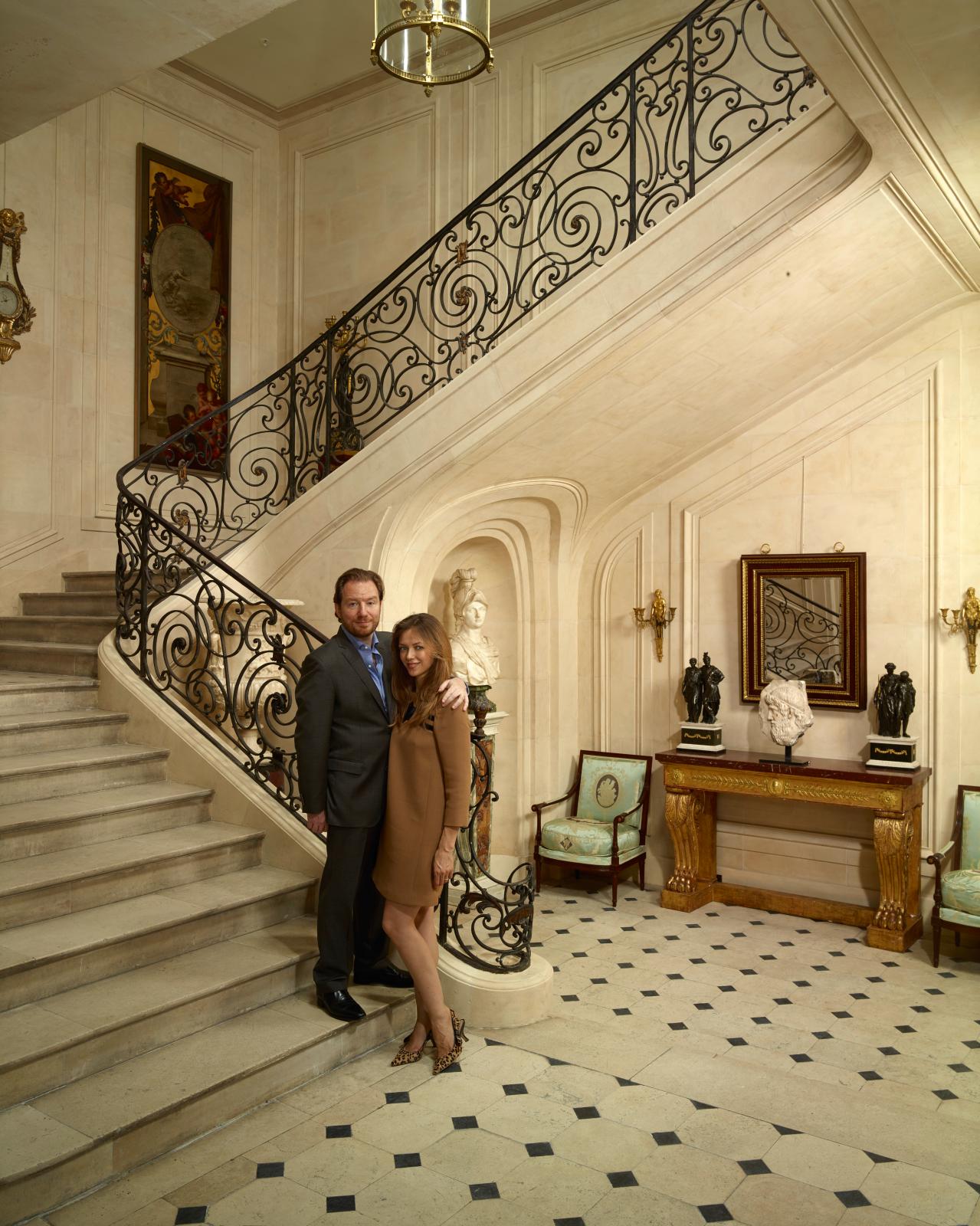 He will certainly remember 2017. But in the end, no more than many other years marked by a decline. Benjamin Steinitz has the philosophy of dealers who are expert at lying low, cultivating patience and bouncing back. He has already faced a Gulf War, the Madoff affair and the disappearance of Russian customers, so when it comes to fallout from the Versailles fake furniture scandal, affecting the entire profession, and more generally, a lack of interest in the 18th century, he can weather it. A philosopher with a fighting spirit who constantly reinvents himself, he attends fairs, and passes on his passion with an inexhaustible conviction. His father made their name famous throughout the world, and his pugnacity perpetuates the legend. Benjamin Steinitz, one of the last top dealers in the French 18th century, recently moved to Rue Royale to refocus his activity.

Why did you leave the Faubourg Saint-Honoré for Rue Royale?
The concept of the Faubourg Saint-Honoré gallery was one I had inherited: a vision connected with my education and my parents. In the 1990s, any antiques dealer worth his salt had to have an address in the Faubourg. When I saw this private mansion opposite the Hôtel Bristol, the temptation was irresistible. It is number 77; my parents were at 75. I believe in places, encounters and signs. It was madness – a total gamble – but it has worked out extremely well. That was the moment I started up my own company, and this location has given me considerable visibility.

But originally, you only intended to live there…
I had this idea of an apartment that was also a very private showroom, where I could entertain various customers over a drink. I wanted to create an intimate atmosphere, as with our stands, with beautiful objects but no spotlights to highlight them. I also wanted to show the restoration workshops, because we have our own. I set up fifteen restorers in premises on the first floor in the courtyard. To my great surprise, this set-up became a highly productive work tool, and that convinced me to focus my entire business here.
And yet it is said that too perfect a staging is not good for sales, as customers can't pinpoint an object to buy. That's true, but I am very old-fashioned, and it works well for me. Our image as interior designers goes back to an old selling method, in the spirit of dealers like Seligmann and Duveen. I know this way of doing things is incomprehensible to a public that no longer has the time to learn… Some people pass our stand and say things like "It’s much too classic!" They can't distinguish the specific features of objects. Any one of our installations features only French but also Italian and English pieces, and there are always a few 19th century touches: I love a mixture.

“In today's market, the only ones who survive are those who have impeccable documentation and restoration records. The relationship of trust is central to everything, and that's what I nurture as a priority.”

Did you have to adopt a new way of working?
What has changed since my parents' time is the study of objects. My team and I work very hard, and make genuine discoveries. One example is these candelabras by Thomire, which we bought from a British auction house. They were presented with no provenance, but we identified them in some gouaches of Prince Demidoff's San Donato Palace. Our expertise is a huge asset, acclaimed by our museum curator customers. I love creating atmospheres, but that's the cornerstone of our credibility. (…) In today's market, the only ones who survive are those who have impeccable documentation and restoration records. The relationship of trust is central to everything, and that's what I nurture as a priority.

Are fairs also a priority for you?
I think they are crucial for both sales and visibility.
I often do business with someone years after just meeting them at a stand. We have always exhibited at Palm Beach and San Francisco. We also have good follow-ups from Masterpiece London and the BRAFA. And we are still regulars at the Biennale Paris… I find the smear campaign against the Biennale unjustified. Times have changed. Top dealers like Maurice Segoura and Jean-Marie Rossi are no longer there, so why not give a chance to people who couldn't get in before? I believe in a meritocracy. A small-scale dealer can have an excellent eye.

What is the profile of 18th century-lovers today?
There are many nationalities, and as always, geopolitics play their part. The Russians have left, and have not yet returned. Is it our role to penalise some of them? It's a great pity, because they move quickly, they have a true aesthetic sense inherited from their history, and they have an innate love of beauty. The Americans are still there, but they are highly influenced by trend phenomena and the craze for contemporary art. We are also beginning to see French customers again, who have returned to live in Paris.

Indulge Yourself at the Exhibition "Drouot Déco"
Newsfeed
See all news
Restitution, Nepal Seeks to Reclaim its Heritage
In Aubusson, the Cité internationale de la tapisserie Is Thinking Bigger
Tempera Work by Mark Tobey Approaches the Million Euro Mark
Gwangju Biennale Postponed to 2023
Not to be missed
Interviews
Amin Jaffer: Curator of the Al Thani Collecti…
The delights of the fabulous collection of Sheikh Hamad Bin Abdullah…
Interviews
Françoise Gilot, Life Story of an Artist and a…
On the eve of her 100th birthday, Paloma and Claude Picasso’s mother…
Interviews
Caroline Jollès, Patron of Design
In 2011, Caroline Jollès, who is very involved with the Quai Branly…
Interviews
Sebastião Salgado: "Photography Has Been a Way…
In a career spanning nearly five decades, Sebastião Salgado has…