Heeding René Grog’s advice, in the 1960s a Frenchman collected Chinese artworks that went against the grain, especially imperial porcelain. 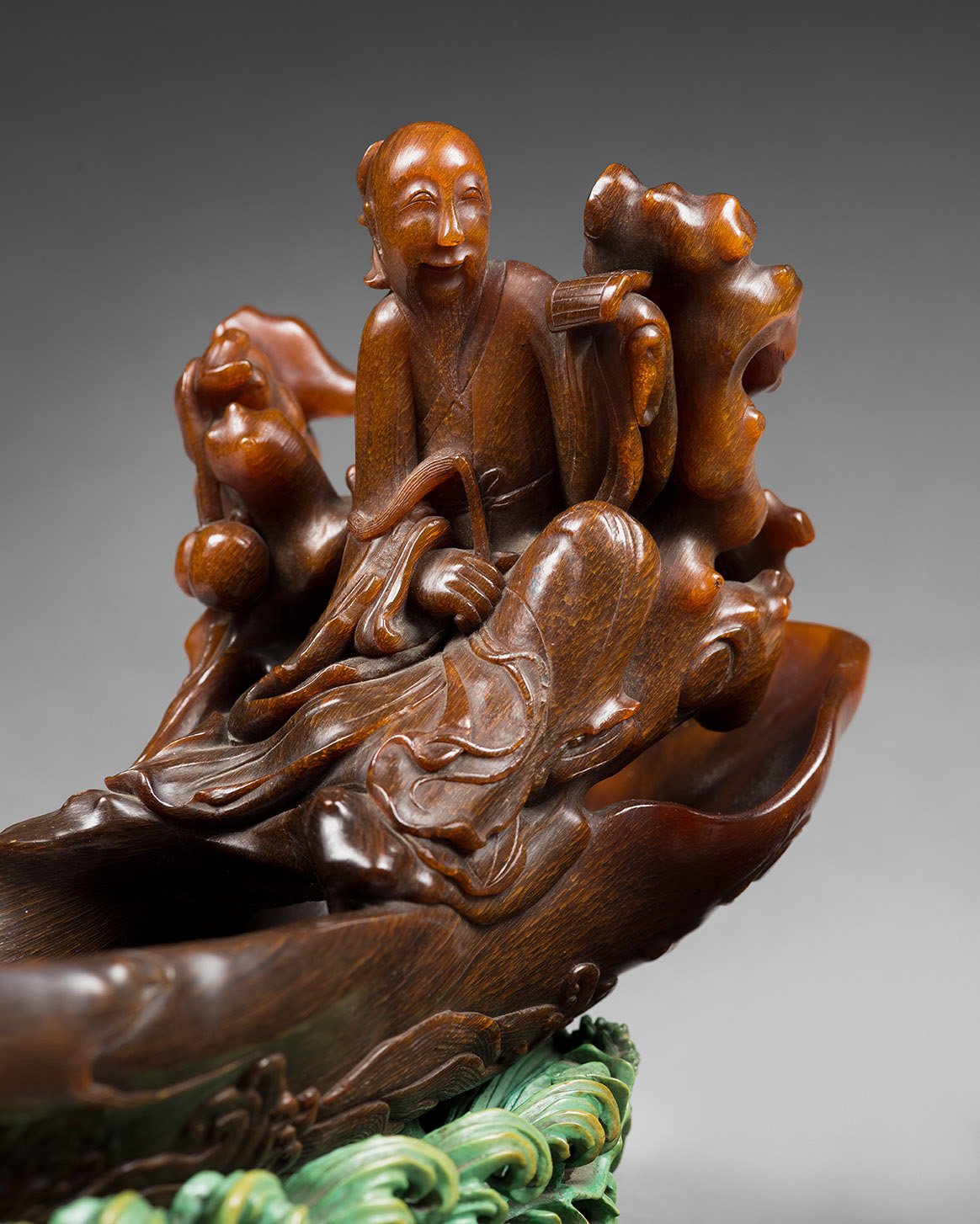 As the anonymous collector bought his Asian artworks in the 1960s, the French market was snatching up Compagnie des Indes ceramics, made specifically for export to the West from the 17th century onwards. He developed a sharp eye and a taste for porcelain from the Qing dynasty (1644-1912), produced for the Chinese market. That accounts for why "the collection is so interesting," says Alice Jossaume, head of Asian art experts Portier et Associés. “It’s what the Chinese liked, which is quite rare for Europeans.” Chinese art is rife with symbolism that is hard for people uninitiated in its puns and their hidden meanings to understand. For example, the term for bat sounds like the word for "happiness", fu, and is associated with peaches. The bat refers to the wishes of happiness and long life conveyed on the occasion of a jubilee. The collector "was an enlightened connoisseur going against the tide, basing his collection on hunches while wanting to invest his money usefully," says auctioneer Olivier Doutrebente, who will not say anything more about him except that he displayed the Asian artworks in showcases in three rooms—the library, living room and dining room—of his Paris hôtel particulier (a private mansion or townhouse) in the 17th arrondissement. The rest of the townhouse was classically furnished. The 18th and 19th centuries dominated a group the auctioneer dispersed at sales in 2018 and 2019.
Heading a company with substantial resources, his advisor and close friend was René Grog (1896-1981), vice-president of Agfa-Gevaert in France and husband of fashion designer Marie-Louise Carven (1909-2015). The couple formed one of the 20th century’s largest collections of 18th-century French furniture and objets d'art, most of which was given to the Louvre in 1973. They also had a soft spot for Asian art, which can be seen at the musée Guimet in Paris, to which they donated their Chinese ceramics collection the same year. Alongside precious "Thousand Flowers" vases owned by Emperor Qianlong (1736-1795), they had a veritable "aviary" built for numerous volatiles, now the museum’s third-floor "bird landing". The pair of early 20th-century polychrome enameled ceramic raptors (€400/600) might also allude to a couple of phoenixes from the Kangxi period (1682-1722) perching on the Grog-Carven’s rocks.

Qing Imperial Ceramics
Doutrebente is today dispersing over 200 lots, including hard stones, but especially 18th and 19th-century ceramics. Times have changed so much that it would be almost impossible to put together such a collection now. "The competition is fierce,” says Ms. Jossaume. “You’d need bottomless pockets to outbid Chinese collectors." Few people were interested in this kind of porcelain 60 years ago, but today it surpasses that of the Compagnie des Indes by far. "It’s hard to put an exact figure on it,” the expert says, “but prices for some pieces can be estimated to have risen by over 200%." The catalog’s most important lots bear the marks of auction favorites Kangxi (1661-1722), Yongzheng (1722-1735) and Qianlong (1736-1795) in their nianhao ("cartouches"). In search of legitimacy, these Manchu dynasty emperors relied on tradition and appropriated the Hans’ cultural heritage. This point is illustrated by several pieces, including a bowl on a pedestal foot featuring three copper goldfish (€6,000/8,000)—a quotation of a Ming period model common during the reign of Emperor Xuande (1425-1435). "In 1739 Tang Ying, head of the Jingdezhen imperial workshops received a direct order from the court to produce vases with a copper-red youlihong glaze," Ms. Jossaume wrote in the catalog. “Similar pieces with a Yongzheng mark are in the Victoria & Albert Museum and the Ashmolean Museum.” The bianhu-type porcelain moon flask decorated with stylized blue lotus flowers (€30,000/50,000) and a pear-shaped lidded ewer decorated with a bouquet of flowers and two longevity peaches (€40,000/60,000) are based on metal models made in the Middle East during the Yongle period (1403-1425).

Away Goes Zhang Qian
Bidders will battle especially fiercely over two other items. First is a rare pair of boxes shaped like longevity peaches in finely carved color lacquer (€200,000/300,000), the lids adorned with the character chun, for spring, in which Shoulao is found. Next comes a rare libation cup in honey-colored rhinoceros horn (€150,000/200,000), a real technical feat. It features a singular subject: Zhang Qian sitting in a boat shaped like a slender tree trunk. Considered the earliest known Chinese traveler, in 139 BCE he was sent to central Asia by the Han emperor Wudi (141-87 BCE) to contract an alliance with the Yuezhi north of the Oxus. He visited the Ferghana and Sogdiane and, after around 10 years in captivity, returned with precious knowledge about itineraries hitherto unknown by the Chinese. Poets penned legendary tales about his journeys, whose goal was to find the source of the Yangzi River, the origin of the Milky Way and grapes to make wine. He was likened to a Taoist immortal, as the double flask motif on the spout attests. The catalog says that the theme of Zhang Qian descending the Yangzi was popular during the Ming dynasty and the early Qing dynasty. It appears on a group of approximately 20 objects in rhinoceros horn, including a bowl at the musée des Arts décoratifs in Paris. This sale is undoubtedly the last chance to see these items in France: most of them are destined for Chinese collectors.

The Color of Jade

Jade was a highly symbolic material in imperial China. Qianlong never went anywhere without a tablet of the Longshan culture (2300-1800 BCE) and had his poems and seals engraved on his collection’s most beautiful neolithic jades. This fascination with the archaic periods is seen particularly in a diamond-shaped yellow nephrite vase dating from his reign (€3,000/5,000). The chiseled décor reproduces the famous mask of the jawless monster Taotie.
Dating from the 18th and 19th centuries, this group of 33 objects in jade or nephrite, a hard stone, features a wide range of colors, from pure white to dark green and shades of yellow or red. The criteria for appreciating these carved objects lies above all in the quality of the stone, enhanced by simple shapes. The pair of dainty, transparent bowls in white nephrite incised with 120 gilded and stylized shou ("longevity") characters illustrate the imperial workshops’ skill (€30,000/40,000). Stamped with Qianlong’s four kaishu characters, it is the group’s flagship lot.
The jade market has been sluggish since 2015 but "seemed to start picking up last year," says Ariane Excoffier of Portier et Associés. “Collectors pay very close attention to provenance.”
Far East
Salle 9 - Hôtel Drouot - 9, rue Drouot - 75009
Doutrebente
Info and sales conditions
Catalogue

The Hôtel Drouot Reopens for the Season with the “Oeuvres Choisies”

Nazy Vassegh: Reinventing the Traditional Art Fair with Eye of the Collector
Newsfeed
See all news
Louvre Museum Opens Le Studio in October, A Place Dedicated to Exchange
UNESCO Announced the Return of the Gilgamesh Tablet to Iraq This Thursday
"Œuvres Choisies" Exhibition Ushers In the New Auction Season at Drouot
RER C Train Will Transport You to the Paris City Museums
Not to be missed
Spotlight
A Table Commemorating the Liberation of France by the…
Mystery shrouds this unique, previously unknown table made in 1947…
Spotlight
A Treasure of Gold Coins Found in Brittany
In 2019, a couple and three stonemasons found a trove of coins dating…
Spotlight
Binoche et Giquello Present a Giant Triceratops Called…
Thrusting out its emblematic skirted skull and sharp horns, this…
Spotlight
Indian Motorcycles’ Legendary Big Chief
Made for the road, Indian’s red-liveried, interwar, upscale Big…