A collection of period bindings provided a recurrent theme through centuries of bibliophilia. 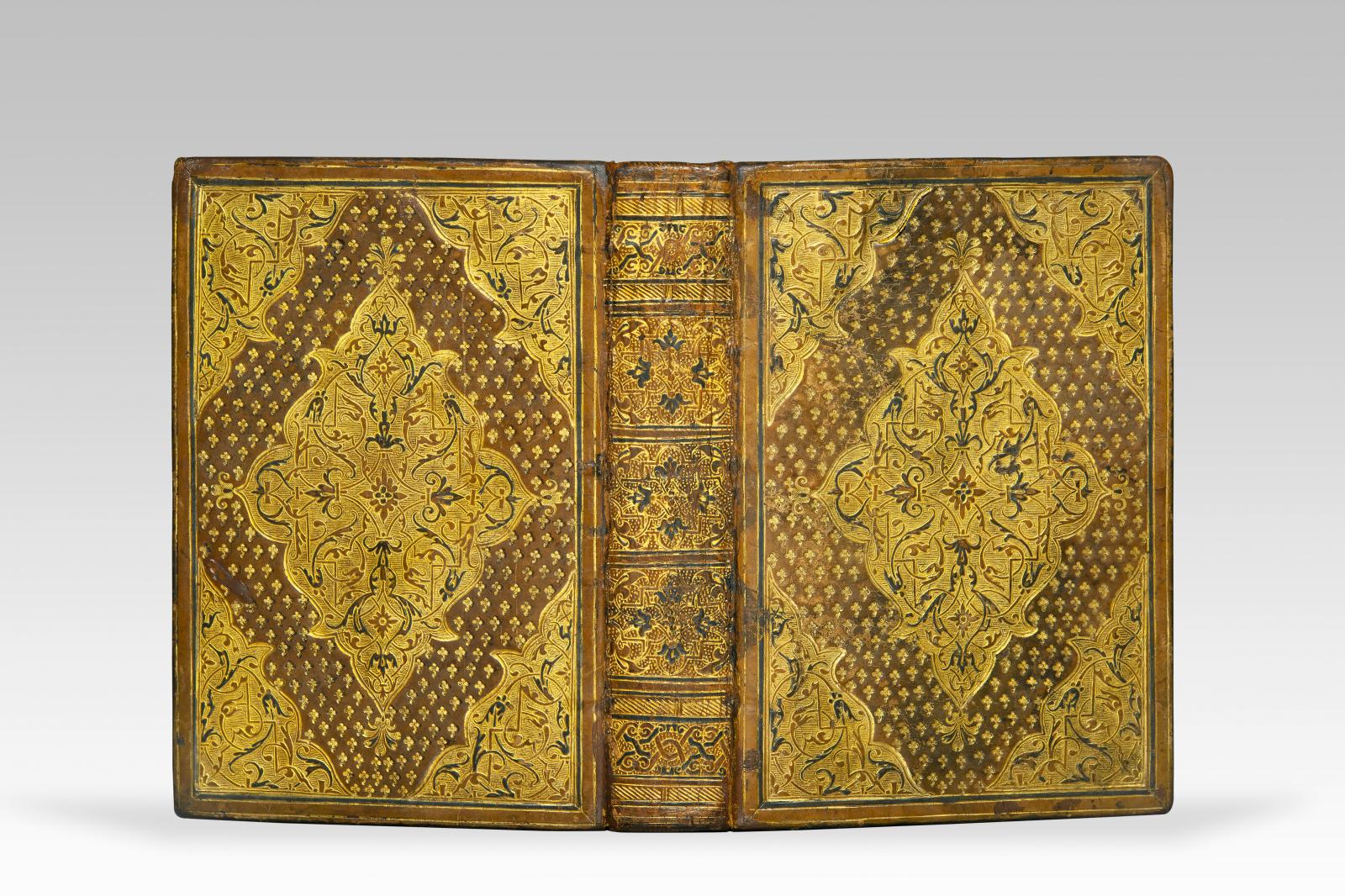 The Bible, which is all the Holy Writings, namely the Old and New Testaments, Lyon, Jan de Tournes, 1561, illustrated with 169 small woodcuts by Bernard Salomon and four Biblical maps, period Paris binding with a gilt and partly waxed Arab-style decoration.
Result: €16,292

In this library, both erudite and decidedly different, a Missale romanum contained within two tapestry covers wove itself a result of €5,013, opening the way to a whole catalog of bindings of every type and period. €4,386 went to one covering the only edition printed by the Parisian publishing house Estienne in the first third of the 16th century of De inventoribus rerum by the Italian Humanist Polydore Vergile (c. 1470-1555). This was the work of Hagué (1823-1891), famous for his pastiches with retrospective decoration (here Renaissance), and €16,292 went to this fine copy of a Protestant Bible in a gilt and partly waxed Arab-style Parisian cover (reproduced above) with remarkable tracery work. We can also mention the €5,639 garnered by a silverwork binding from the second half of the 16th century similar to the kind made in Venice, here used to protect a collection of spiritual poetry by Gabriele Fiamma (d. 1585). Two morocco bindings by Pierre Legrain (for Veterum Latinorum by André Lambert and Le Cabaret de la belle femme by Roland Dorgelès) were neck and neck at €5,013 each, while the highest bid, €22,558, rewarded an edition embellished with a subtle illustration by François-Louis Schmied of Les Climats by the Comtesse de Noailles, bound in emerald green morocco highlighted with gold fillets by Georges Cretté.
The Bibliothèque Nationale de France pre-empted two books, establishing institutional recognition. Firstly, at €2,005, a rare specimen of a removable binding covering an Elzevirian first edition of poetry (Poëmata) by Gilles Ménage (1613-1692), considered a gem of typography, and secondly Thérèse the Philosopher attributed to Boyer d'Argens, at €1,173. Lastly came a bid of only €1,754 for The Office for Holy Week according to the King's Rite, whose binding had been removed by an expert hand, although it consisted of a unique document illustrating the sometimes eventful history of the book.

OUTSTANDING BINDINGS : Collection C. L.
Binoche et Giquello
Info and sales conditions
Catalogue
Salerooms
Newsfeed
See all news
Italy’s Oldest Café Is in Danger of Closing
From Christopher Columbus to Harriet Tubman: Trump Wants to Honor ‘American Heroes’ with a Sculpture Garden
A New Platform to Elevate Art from the Global South
German Museums Are Reconsidering How They Treat Human Remains
Not to be missed
Lots sold
A Masterpiece by an Apprentice
This type of strongbox was made by an apprentice seeking admittance…
Lots sold
Magritte High on the List
The Belgian master cultivated mystery, making play with different…
Lots sold
Martiros Saryan on Armenian Soil
A painting by Martiros Saryan resonates like a paean to a beloved…
Lots sold
Juan Gris, Trailblazer
This painting features all of the Cubist master’s qualities and…