This study by Edgar Degas for the Portrait of Mlle Dubourg, now in the Toledo Museum of Art (Ohio), passed through the collections of Mme Lazare Weiller and her son, Paul-Louis Weiller. 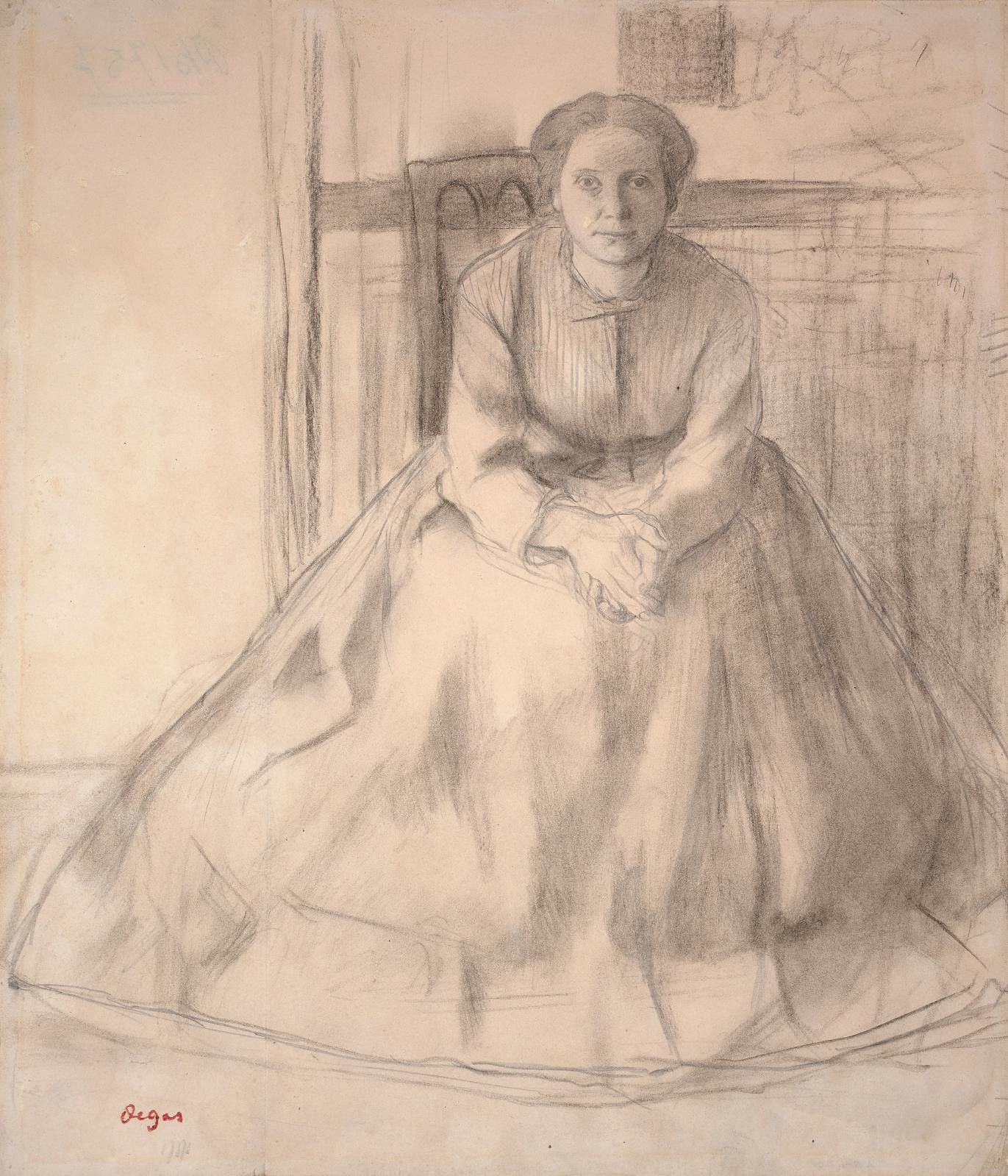 In around 1868-1869, Edgar Degas painted the portrait of Victoria Dubourg (1840-1926) now in the Toledo Museum of Art, in the USA. This study precedes the portrait by about two years. Victoria Dubourg, herself a painter, studied with Fanny Chéron in Paris. She exhibited portraits and still lifes at the Salon from 1864 to 1902, first signing her name as Mademoiselle Victoria Dubourg, before adding "Madame" in 1878. In 1876 she married the painter Henri Fantin-Latour, whom she met when he was copying artworks at the Louvre. She was already well-known to the Parisian art circle, and was very close to Édouard Manet from the early 1860s: he was the best man at her wedding. The couple lived in Rue de l'Université in Paris. After Fantin-Latour's death in 1904, she devoted her energies to compiling his catalogue raisonné.

The composition of this portrait, which shows Victoria almost taken by surprise in her interior in an unusual position, seated and leaning forward, was taken up by Degas for the portrait of Mary Cassatt he painted in around 1884. The drawing here was included in the second sale of the Degas studio at the Galerie Georges-Petit on December 11-13, 1918, and later belonged to Madame Lazare Weiller, widow of the French industrialist and politician, and then to her son and leading collector Paul-Louis Weiller, before entering the collection of Mr. and Mrs. T. The work illustrates Edgard Degas's particular bent for the art of portraiture. He produced portraits in his formative years, using members of his family and himself as models, and during the first 20 years of his career, until the early 1870s. He proved his talent as a draftsman with a fluid line and highly original compositions, capturing his models on the spot rather than in a pose, immersed in their intimate worlds.

Prestige Catalog Sale
Blois - 32, avenue Maunoury - 41000
Pousse-Cornet
Info and sales conditions
Catalogue
Newsfeed
See all news
We will be on vacation from July 23rd - August 23rd. Wishing you a great summer and see you in September!
Santiago Caltrava Renovates San Gennaro Church in Naples
50% Funding Cuts for Arts and Design Courses Approved by UK Government
Instagram’s New “Sensitive Content” Controls Cause Concern Amongst Artists
Not to be missed
Pre-sale
Under the Protection of Maahes: A Rare Egyptian Bron…
This well-sized bronze statuette dating from Egypt’s Late Period…
Pre-sale
The Op Art of Vasarely and the Discourse of Descarte…
This painting by the master of optical art has never come up for…
Pre-sale
Lalanne and the Charging Rhinoceros
This bronze sculpture with an enamel patina, which is from a private…
Pre-sale
From the Abstraction of Viallat to the Silk Paintings…
Two worlds will come together in Nîmes: those of Vietnamese painter…